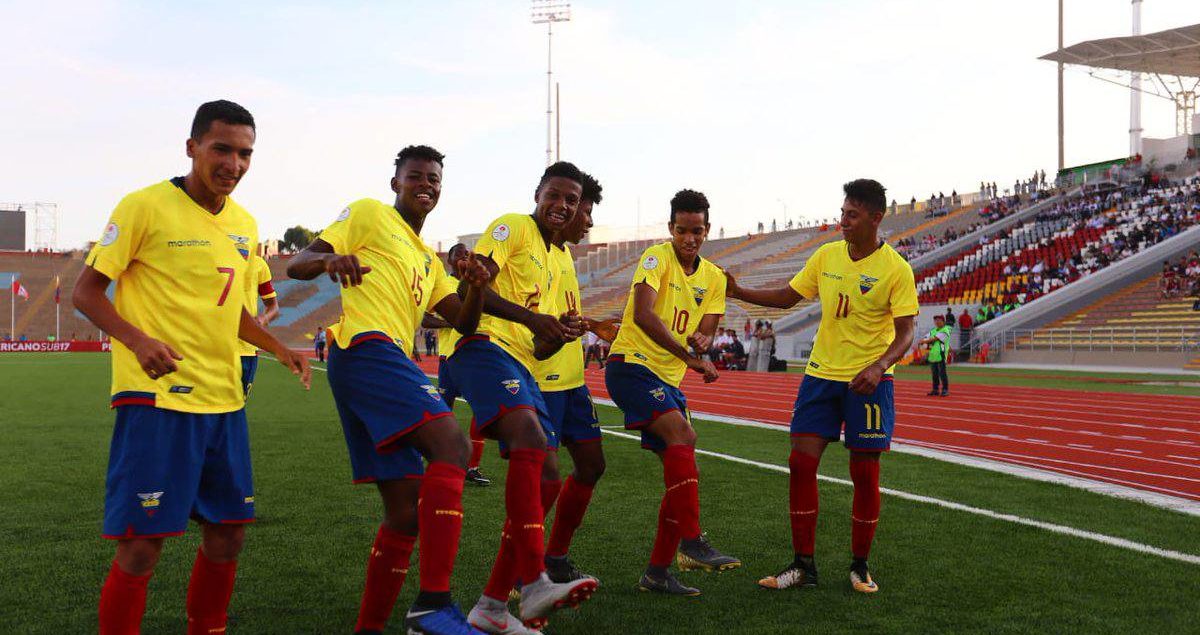 With the 2019 South American U-17 Championship wrapping up last week, Brian Bertie gives his team of the tournament.

Massimo Sandi in net was a no brainer. Lukas Gonzalez from Uruguay is an honourable mention, but Sandi was the reason Peru were able to stay alive for so long after a rather poor hexagonal showing.

He was confident in goal. He was composed under pressure, when he needed to win an aerial duel and was calm in the timing of his runs. His weak point was definitely when needing to use his feet, as goal kicks always went to the sides.

His big game moments gets him the spot as the goalkeeper of the tournament. He made a lot of stops against opposition attempts. From close range or long range. Peru’s defence was very leaky, but the Alianza Lima goalkeeper was able to step up in order to keep La Blanquirojita in games.

The Chilean fullback made himself famous when his goal against Bolivia went viral due to how well the set piece attack was set up.

He is certainly not a one-goal wonder. He was a very dynamic and quick full back who supported Gonzalo Tapia a lot as his more defensive sidekick. Overlapping runs and gave the right winger a partner to pass to under pressure.

Currently, Tati is part of Colo Colo. Opazo is the right back for the Chilean giants, so it will be tough to overtake him, especially still at 17. However, there is certainly potential in Tati to get in the first team at some point within the next 3 years.

Argentina were a hard team to judge. They didn’t play eye-candy football but were precise and effective.

Defensively they were very solid. While Amione got injured for the last 3 matches, his impact in the other matches gets him in the team of the tournament.

Currently he plays for Belgrano, who have just been relegated to la B in Argentina. This could prove as a good thing for Bruno as a couple players for certain teams have already debuted professionally, mostly in the second tier of their countries.

Another thing is he could take the route of Tevez and Riquelme, who start at a smaller club before being brought by a giant and given a chance there.

Regardless, he’s been a part of the Argentina side since the U15 (in which they also won the tournament) and he’s done very well to consolidate himself in the team.

Uruguay’s defence were a bit shaky. Siri was the exception and at times had to cover parts of the backline on his own.

He did very well in his aerial duels, especially during set pieces. Both offensively and in defence. Currently plays for Danubio, the same club that spawned Edinson Cavani. While not Defensor Sporting, not a bad club to be at when you’re still under 18 years of age.

The hero that nearly sent Peru to the World Cup with his last minute goal.

While he didn’t stand out particularly, or show a great deal of talent, he was the best left back of the tournament which really didn’t have much talent in the competition.

He was consistent in most games, and solid enough compared to the other left backs. He is also very tactically disciplined, as he knows where to stand and when he needs to track back in order to avoid counters. In other words, his positioning is great.

He plays for USMP, which is known for giving their young players chances and basing their team around them (their average age last year was 20.8)

Pluas was easily the best deep lying playmaker in the tournament. He would be able to play it out of defence and then put in a killer ball to find the forwards in order to start an attack.

Ecuador struggled in the Hexagonal, but they were definitely not short on talent. Pluas was one of the more underrated players and he more than deserves his place on this team.

He curiously plays for a regional side in Orense, which could very well imply that it is an academy. He could now, or after the World Cup, get picked up by a first tier team from Guayaquil or Quito ideally.

As mentioned, Argentina didn’t play eye candy football, but they are solid.

Sforza was important to the tactical system, as he played a big role in helping to keep possession. He also got forward a lot, although wasn’t dynamic enough to be called a “box to box midfielder”.

He plays for Newells Old Boys, and according to some of their fans, he is one of the gems in their youth ranks, which is always a good sign.

Easily the most talented player in the tournament.

Despite not being the most influential in numbers, he was electrifying going forward and did very well in team build up. He also won a lot of fouls along the way.

His dribbling is his biggest strength. He’s quick and unpredictable on the ball when it comes to using footwork.

While the U17 isn’t always a good measurement for future stars, Gonzalo Tapia has a big future as he is ahead of the rest in terms of development.

He plays for Universidad Catolica, who often give their young players chances. He will probably get a couple games this year off the bench at least.

The top scorer of the tournament, whom has been linked with Chelsea at some points.

Picking a number 10 was difficult as it was between Fernando Ovelar, Mathias Palacios, Yuriel Celi, Mathias Ocampo and Alexander Aravena.

Johan Mina topped the game just slightly, as his numbers were enough to lead Ecuador to a World Cup, especially after a poor Hexagonal.

He is very good at holding up the ball inside the box, and hold off the defenders until the other attackers join him in the final third.

He is composed on the ball, when holding onto it and making short passes under pressure. He is quite a classy attacking midfielder.

He plays for Emelec at the moment.

Gives Tapia a go for the most talented player in the tournament, but is let down by worse physique and lesser brains in attack.

He’s very unpredictable on the dribble. His style is very comparable to fellow countrymen Jefferson Montero. Quick on the wing with the ability to cross from deep, or cutting inside taking advantage of his dribbling ability.

According to some sources, he is a free agent and no longer at Liga de Portoviejo. Any Ecuadorian club would do a good job to bring him in.

While he only bagged 2 goals, he was a very tough forward to come against for a defender.

His off the ball movement was very unpredictable, great at moving into space diagonally and has strength which also helps him hold up the ball.

Very similar to Roque Santa Cruz. While he is more supportive than his fellow countrymen, he does have a couple goals in him and got a bit unlucky to score only 2.

Also similarly to Santa Cruz, he plays at Olimpia and could very much get a chance after the 9 spot is clearing up when Roque retires.