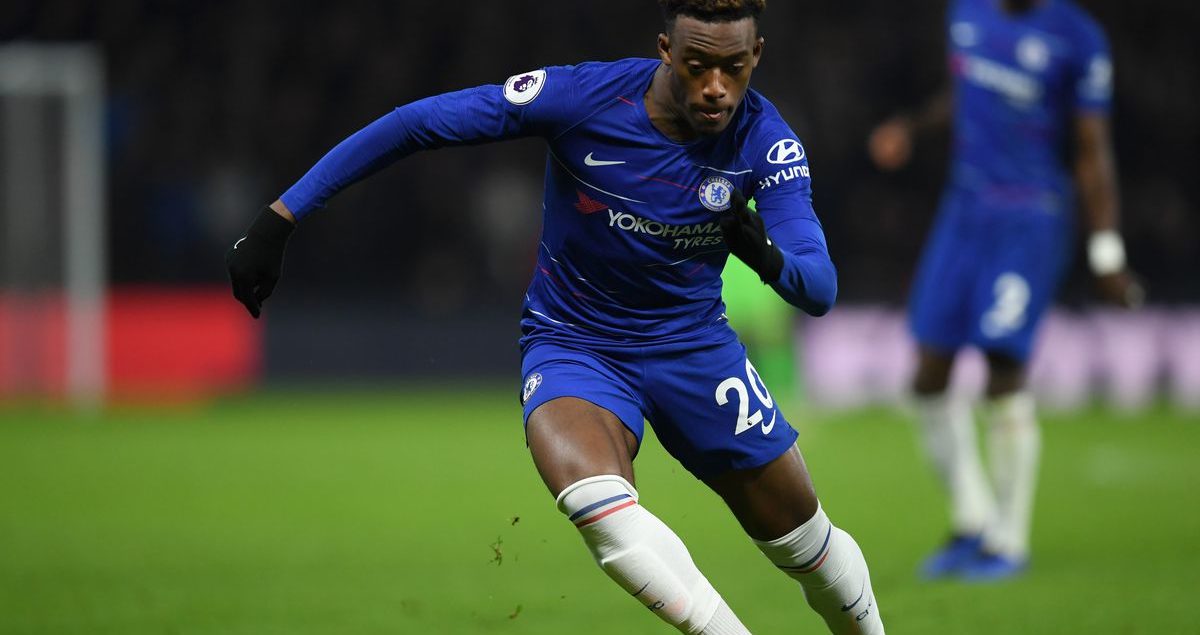 Callum Hudson-Odoi is undoubtedly one of the hottest prospects in Europe right now, with Bayern Munich increasing their bids for the English winger, and with the Germans inching closer to the reported £40 million asking fee, it is possible that Hudson-Odoi will become the latest English winger, after Jadon Sancho, Ademola Lookman, and Reiss Nelson, to further his development in Germany. The 18-year-old could very well follow in the footsteps of Mohamed Salah and Kevin De Bruyne, who left Chelsea at young ages for playing time, before returning to England and becoming key players for their rivals. So, why must Chelsea do everything they can to assure Hudson-Odoi stays put?
Hudson-Odoi, like Sancho during his time in Manchester City’s youth teams, is primarily a left-sided winger, although he is comfortable working from other wide areas, something he will have to do if he wants a shot at breaking it at Chelsea. He is fairly tall, standing 5′ 10″, he is explosively quick both in and out of possession, but it is footballing intelligence that really stands out when watching him play, Despite just being 18, Hudson-Odoi boasts an intelligence beyond his years, often trying to pick out a spectacular pass or use the striker for a 1-2 before exploding into the box, causing confusion for the opposition defenders.
Furthermore, Hudson-Odoi has the potential to become one of the best wingers in Europe for years to come. He’s a fantastic dribbler, and even when he runs at top speed, he keeps the ball glued to his feet, holding off defenders with his impressive torso strength, and bamboozling fullbacks with his explosive turn of pace.
In addition, he’s a nightmare to defend against 1v1; he can easily beat a man with skill or pure pace and power, whether it be in the U-17 Euros or the Europa League. Just look at his first goal at the senior level, which came against Greek club PAOK: he received the ball, and immediately attacked the defender with electric speed, before calmly slotting past the keeper. There is no hesitation from him; he attacks the fullback, confusing him with his searing pace and constant misdirections, before opening up space for a pass to another attacker, or simply taking the shot by himself. He oozes with confidence every time he play, and unlike many other young talents, he doesn’t seem to be fazed by the biggest occasions.
Chelsea fans don’t just want Hudson-Odoi to play more because he’s an academy product; they want him to play more because he’s the 2nd-best winger at the club. Willian has recorded 4 goals and 6 assists in 26 games this season, while Pedro has recorded 6 goals and 2 assists in 23 games. The fans are getting frustrated by the lack of rotation from Maurizio Sarri, as well as the lack of game time for youngsters, with the likes of Ethan Ampadu and Andreas Christensen not getting a look in despite their obvious talent. Odoi can offer the goal threat and venom that Chelsea have been lacking in the final third this season, with the team only managing 11 goals in the past 9 games. Even Sarri has noted the Englishman’s obvious potential, saying, “he has the potential to be become a very important player, not only for English football but for European football.” However, in the same presser, he cited Hudson-Odoi’s need to improve off the ball, and explained one of the things we’ve always known: Chelsea managers have to prioritizing wins over youth development. There isn’t enough patience at the top of command to do otherwise.
Bayern, having taken notice of the great success young English wingers like Sancho and Nelson have had in Germany, are looking to try their luck at another flashy talent who has struggled to make the jump from Premier League academy to Premier League first team. With Kingsley Coman looking more injury-prone than ever, with Arjen Robben set to leave this summer, and with Franck Ribéry past his prime, Bayern need a new wide forward, and Hudson-Odoi would be the perfect compliment to their “youth revolution,” which has seen them pick up Alphonso Davies and Serge Gnabry in recent years to reinforce an aging attack.
If Bayern can recognize Hudson-Odoi’s talent, why can’t Chelsea?
With Pedro and Willian declining in proficiency and increasing in age, with Chelsea starved of a top-notch goalscorer, and with supporters desperate for an academy talent to break into the first team, now is the perfect time to tie Hudson-Odoi down to a new contract, which can only be done by giving him more playing time. If Chelsea do sign a central forward this summer, the English teenager can fight it out for Pulisic for a starting spot. If they don’t, then he can potentially form a front three with Hazard and Pulisic, with one of them operating at a false 9. However, it is looking all the more likely that Callum Hudson-Odoi will join the long line of prodigious talents who have left Stamford Bridge to get much-needed playing time. Everyone–from Bayern’s board to Blues fans–knows Chelsea are about to make an unforgivable mistake, that is, everyone but Chelsea themselves.
By: @CFCPys