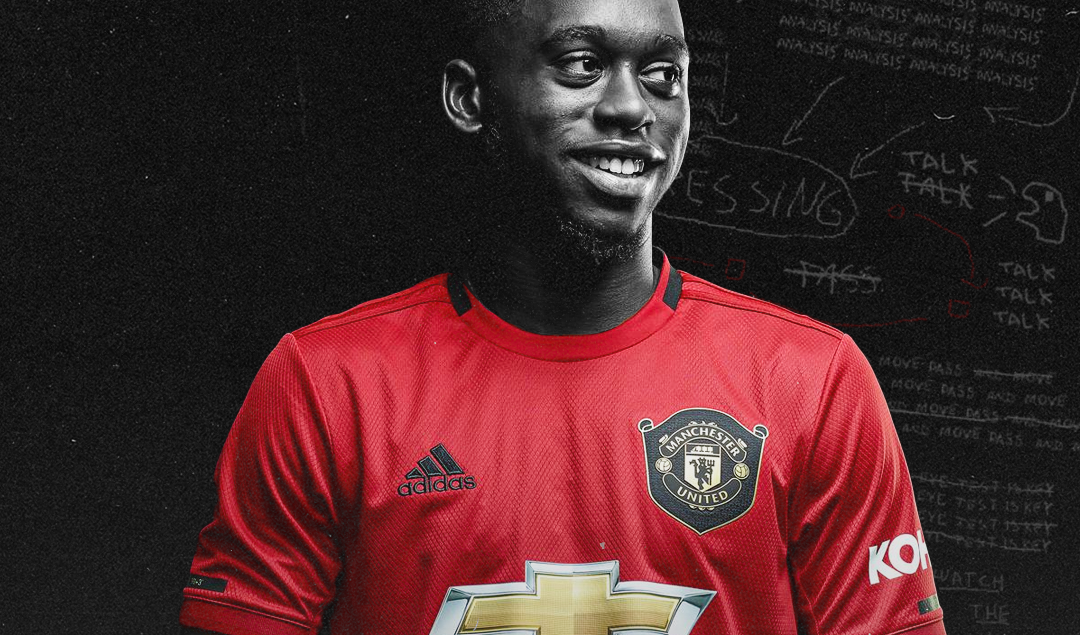 The purchase of Aaron Wan-Bissaka from Crystal Palace for £49.50m in the summer of 2019 was seen as an important aspect of a defensive overhaul at Manchester United. The Red Devils had spent the past few seasons hanging by a thread defensively, leaning heavily on the shot-stopping heroics of David De Gea.

Following the arrival of Wan-Bissaka alongside center back Harry Maguire, it was hoped that United could forge a new defensive identity, a cohesive unit that would relieve the burden of preventing goals from the shoulders of De Gea. With a full season under his belt, now is the perfect time to assess Wan-Bissaka’s first season at Old Trafford and what lies ahead for the 22-year-old.

Wan-Bissaka burst onto the scene in the 2018/19 season at Crystal Palace, becoming known for his exceptional 1v1 defending and great tackling skills. These qualities of his were accentuated by the nature of the Palace side under manager Roy Hodgson, a team that often came under repeated waves of attacks against larger opponents.

Hodgson is known for his zonal marking tactics: in his side, Wan-Bissaka was primarily responsible for maintaining his position in the back four, then pressing any opponent in his zone. Naturally, a side like Palace that is weaker as a collective will come under pressure more often, thus enabling a defensive-minded player like Wan-Bissaka to flourish.

In terms of the tackling and defensive side of the game, United fans largely knew what they were getting with Wan-Bissaka, and the young full-back has continued to display his strength in 1v1 scenarios during his time in Manchester. Whereas Wan-Bissaka was much more of a mystery was how he might contribute offensively, and doubts about his ability going forward have not been quelled by his first-season performances. 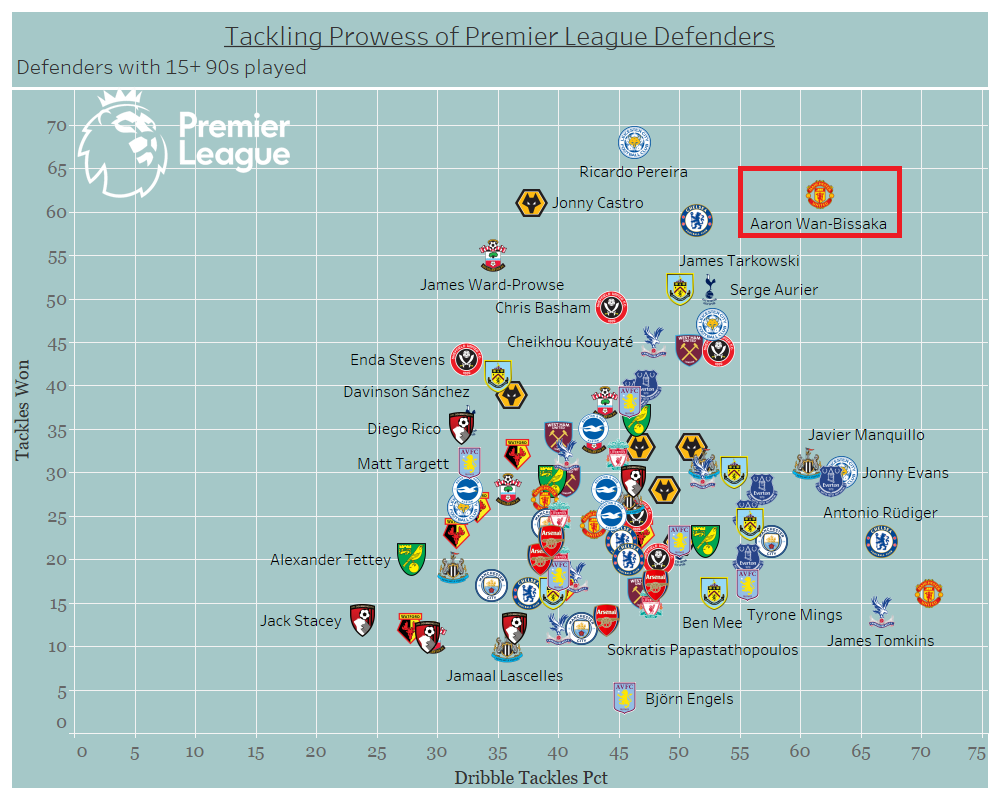 Wan-Bissaka is one of the league’s elite tacklers. However, tackles are not wholly indicative of how good a defender is.

Aesthetically, the Englishman looks uncomfortable when on the ball anywhere in the opponent’s half, his ball-carrying and dribbling skills awkward and an eyesore. These aesthetic grievances would be largely irrelevant if Wan-Bissaka could consistently beat players off the dribble, or whip in a well-placed cross. However, that hasn’t been the case.

Crosses like this one to assist a Martial header have been few and far between for Wan-Bissaka this season.

In the era of the modern full-back, defenders are now being expected to fulfill greater attacking roles for their sides. The emergence of this new role is best exemplified by Liverpool’s Trent Alexander-Arnold, who has demonstrated a level of attacking prowess that is reminiscent of a prime Dani Alves driving up and down the right flank at Barcelona. Alexander-Arnold has in his toolkit a wide passing range, a pinpoint whipped delivery, and an all-round confidence in his attacking decision-making. He is the hallmark of the modern full-back.

In stark contrast, Wan-Bissaka’s attacking contributions have been found wanting throughout the majority of the season. With the evolution of the modern game requiring full-backs to possess a diverse skill set, it begs the question of what lies next for Wan-Bissaka. His counterpart on the left side of the pitch, Luke Shaw, has proven very successful in his forward link-up play with Rashford. United must hope that Wan-Bissaka can emulate Shaw’s dynamics on the right side, in exchange with Greenwood and Daniel James.

As mentioned, the nature of Crystal Palace’s style of play did not necessitate Wan-Bissaka to exhibit such a well-rounded game. Being on the back foot more often than not only enhanced his strengths and diminished his shortcomings. In fact, this lack of emphasis on his shortcomings has been true during some of his time at United.

When Solskjær deploys a deeper line that looks to win the ball in good areas and spring counterattacks, it allows him to extract the greatest benefit out of Wan-Bissaka’s playstyle. When relying on the individual brilliance of United’s front four and their ability to quickly turn a loose ball into a numerical advantage on attack, less is expected of Wan-Bissaka on the offensive end.

Take for instance Mason Greenwood’s strike against Aston Villa in Matchday 34. The goal sequence starts when Anthony Martial picks the pocket of Tyrone Mings right below the center circle, before Bruno Fernandes plays Greenwood down the right, who after a brief exchange with Martial dispatches a thunderbolt into the back of the net.

In a mere 10 seconds, United’s front four have single-handedly covered 50+ yards and scored. Not allowing Villa’s defensive structure to recover means United can pick apart their defense quickly rather than attempting to break down a deeper block.

This lightning counterattack from United demands nothing from Wan-Bissaka on the offensive side.

Although United’s counterattacking style is entertaining even to the neutral, it is not suited to every match and opposition. 7 of United’s 8 losses this season came in matches where they maintained the majority of possession, the only exception coming in their 2-0 defeat at Anfield.

United have been shown to struggle in breaking down deep blocks. For United to progress as a team, they must also develop the ability to consistently get results when opponents sit back and allow them to have the ball. Here is an area where Wan-Bissaka has struggled.

Wan-Bissaka fails to measure up offensively in comparison to the other full-backs at the top English clubs, of the likes of Liverpool, Chelsea, and Manchester City. One area where he can be found wanting is how few crosses he attempts: he is averaging about 3 attempted crosses per 90; in comparison, Alexander-Arnold attempts over 10 per 90, Andrew Robertson over 5 per 90, and Serge Aurier over 4 per 90.

He also plays less than 1 key pass per 90 (0.76). Compare this to his former Palace teammate, Patrick van Aanholdt, who averages over 1.1 key passes per 90. Once again, Liverpool’s full-backs both generate over 1.5 key passes per 90.

Liverpool’s dominance is indicative of the importance of full-backs who offer options in attack. The demands of a more possession-based style currently exceed Wan-Bissaka’s performances, but the United defender is certainly ripe for time to improve given his young age. 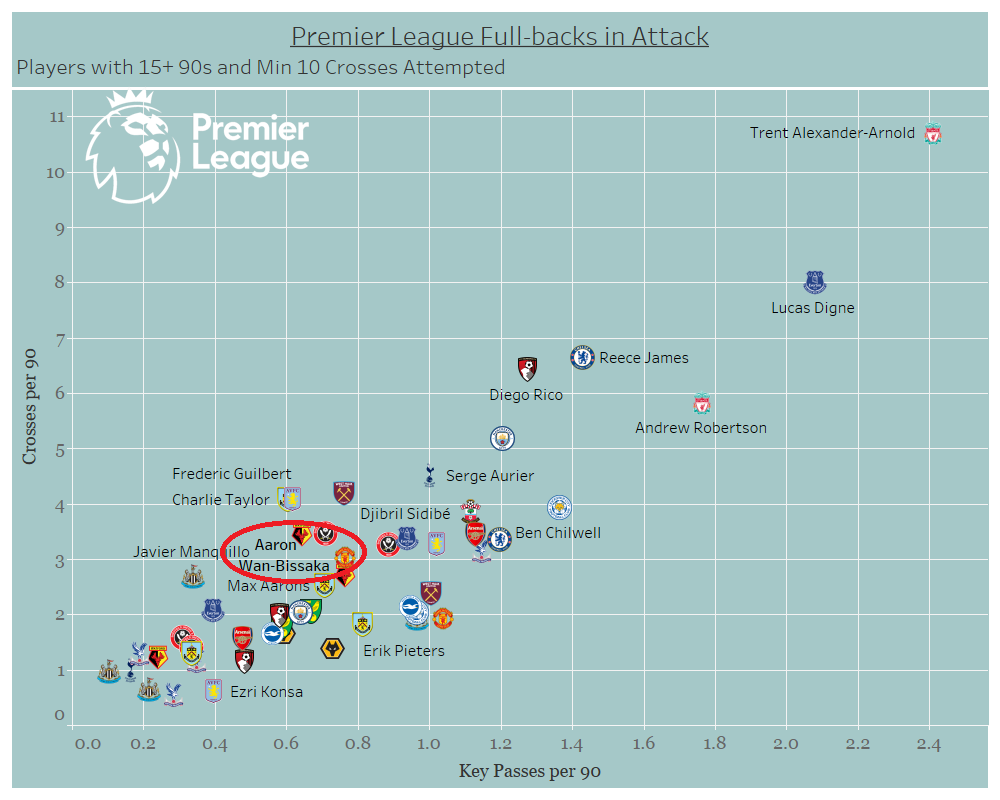 The above graphic shows that Wan-Bissaka is comfortably average in contributing to chances going forward.

It may be the case that Wan-Bissaka simply needs more time to accommodate the more attacking role he may be asked to play at United – after all, he has only just finished his first season at United. More minute adjustments, such as body positioning and greater awareness, may develop with more repetition.

Sometimes, he is forced into dropping the ball back or laying it off to a deep-lying midfielder because his receiving angle is too narrow to set himself up for a forward delivery (see the opening 5:00 minutes of Lee Dixon’s analysis to visualize this).

Hesitancy going forward also impacts the forwards and wingers that Wan-Bissaka is delivering to. They will attempt to develop patterns based on what they expect him to do when he picks up the ball down the flank, but will be less likely to gamble on runs knowing that he sometimes drives himself into a hole and then must recycle the ball to keep possession. Maturity in decision-making in the final third is something Wan-Bissaka must develop sooner rather than later if he hopes to evolve into a modern-day full-back.

Wan-Bissaka’s stalwart defensive ability raises an important question for Solskjær to contemplate – would he be better suited as a center back?

Standing at 1.83m tall, he lacks the height of the likes of Maguire, but he isn’t short by any means. He could potentially thrive as the right center back in a 3-man backline, where much less would be asked of him offensively. His defensive skills would aid him in dealing with skillful wingers, and he would likely hold his own against taller, stronger forwards. 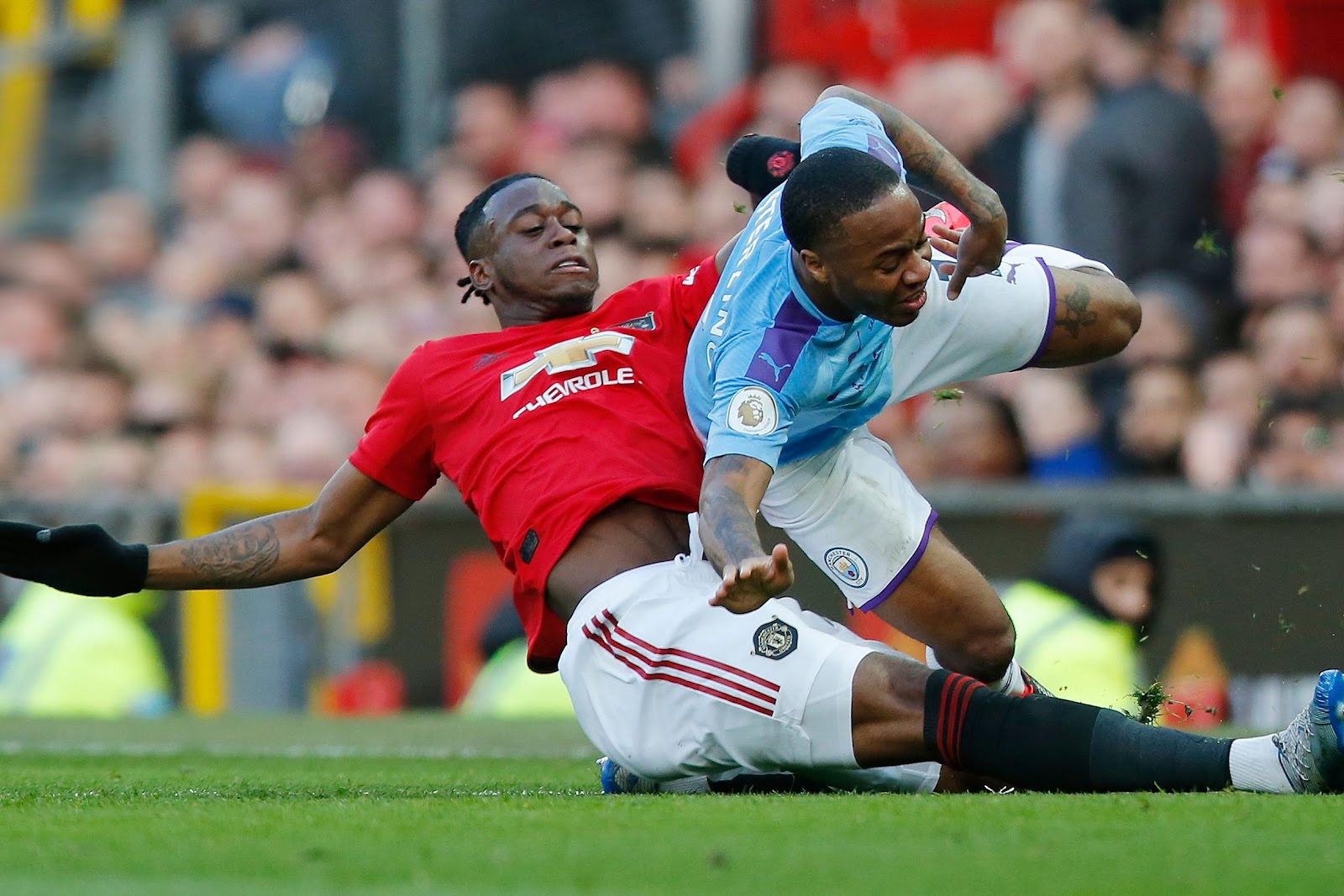 During an Instagram Live from March, former United great Rio Ferdinand backed the Englishman as a center back. With the support of a legendary center back, a potential positional transition could be in the cards for Wan-Bissaka, and has likely crossed the mind of Ole and his coaching staff.

Converting him to a center back as part of a back three would obviously necessitate the implementation of a new tactical system at United, which has to be a consideration in this debate. Is it truly worthwhile to change an entire system to better suit one player’s strengths? Perhaps Solskjær could find a way to maximize Wan-Bissaka’s toolkit whilst maintaining the blossoming chemistry we have seen from United’s dynamic front four.

Whatever lies ahead for Aaron Wan-Bissaka will not change the fact that the 22-year-old is one of the best 1v1 defenders in world football. United have themselves a brilliant tackler who has a love for defending and who is only bound to grow given his age. It remains to be seen whether Ole Gunnar Solskjær may tinker with his tactics to better account for Wan-Bissaka’s weaknesses, or if the United manager will stay on course.

Credit to the NBC Sports Youtube channel for all in-game freeze frames.