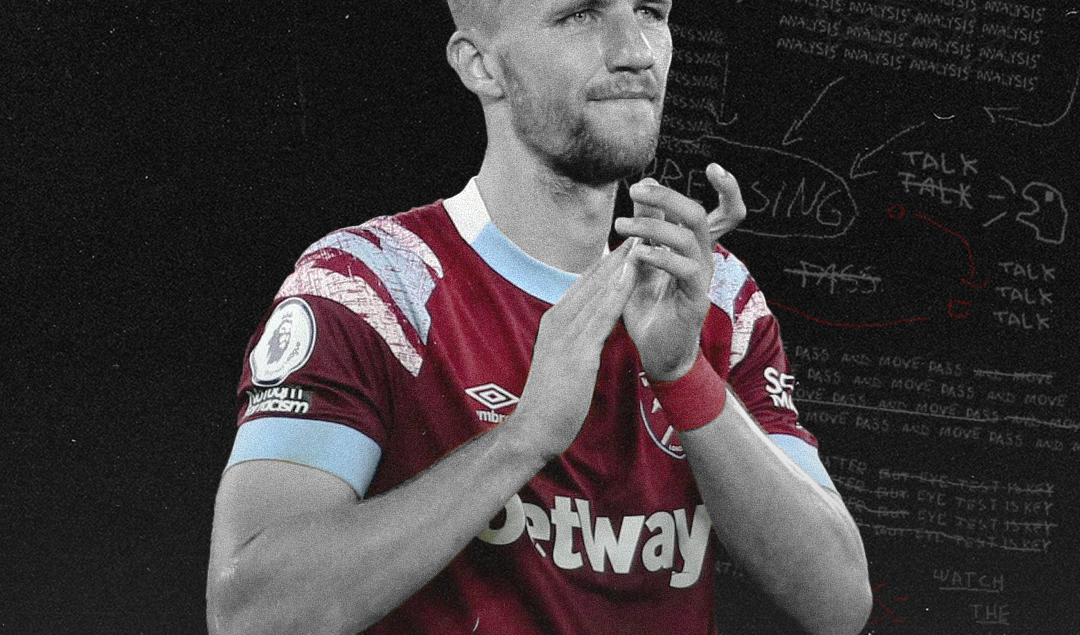 For the first time in a while, storm clouds are circling above the London Stadium. West Ham sit 15th in the table, and whilst the Hammers will cite their difficult fixture list – they have already played Manchester City, Chelsea, Tottenham Hotspur, and an in-form Brighton & Hove Albion – there are reasons to be concerned about the trajectory of David Moyes and his side.

West Ham have not clicked in the first months of the campaign, falling into an ever-worsening nosedive. Their form since 16 January is dire: seven wins, five draws, 13 defeats in a 25-match span where they created fewer expected goals than their opponents (1.13 xG v 1.43 xGA per 90).

Moyes, in what is now viewed as a feature of his management style, has been reluctant to bed in the club’s marquee offseason acquisitions. Gianluca Scamacca is yet to make his mark in the Premier League, while Lucas Paqutá has been uninfluential from attacking midfield.

However, Maxwel Cornet is the clearest example of untapped potential in East London, with the Ivory Coast international limited to the role of an impact substitute despite being lively in cameo appearances for his new club.

Tactically, a state of inertia has set in. West Ham have trialled a five-player defence in a handful of matches but are yet to find a workable alternative to their favoured, but now ineffective, 4-2-3-1. Of course, the situation is not irredeemable.

Relative to their history, the Hammers are in fantastic shape, qualifying for continental competitions in back-to-back seasons for the first time. They also enjoyed a cathartic run to the Europa League semi-finals last term and have rebounded with Moyes at the helm.

In other words, West Ham should be okay – they have enough quality to play their way out of trouble. But they risk sleepwalking into disaster if they leave the causes of their regression unaddressed, and the biggest factor in their slide is Tomáš Souček.

The 27-year-old central midfielder burst onto the scene after arriving on loan from Slavia Prague in 2019-20, scoring thrice in 13 appearances to keep his new team afloat in the Premier, but has struggled lately. Souček produced a miserable performance in West Ham’s final match before the international break, a one-nil loss versus Everton, and was particularly wasteful in possession, finishing the contest with a pass completion rate of just 75 percent.

His afternoon included several disappointing moments, culminating with a botched pass to Kurt Zouma in the defensive third:

Instead, Souček attempts a cross-field distribution to Zouma (WHU4) and misses his target, forcing Vladimír Coufal (WHU5) into a recovery run to bail his countryperson out of trouble.

There are three major issues with the above play:

The former Hammer of the Year provided a similarly infuriating moment before the break, failing to identify a line-breaking pass to Michail Antonio:

Jarrod Bowen (WHU20) intercepts a pass in the 28th minute, bouncing the ball into Souček’s path. He takes a quick scan of the attacking half before connecting with Paquetá (WHU7). West Ham win a free-kick for a foul on the Brazilian but missed an opportunity to thread Antonio (WHU9) into clean air in the final third.

After the match, Moyes criticised all aspects of West Ham’s performance. “We’re still trying to put new players in and find out more about them,” he told reporters after defeat on Merseyside. “We found out little bits, but it was mainly the players I know about who let me down at different times with poor play overall.

“The players who played last year are not playing up to their level and we’re introducing new players as well… we just couldn’t put two or three passes together and when we got in the final third, we almost always made the wrong decision.”

Soccerment’s match report tells a similar story: the travelling side out-chanced their hosts but fell flat in the final third, as illustrated by West Ham’s pass and average position network: 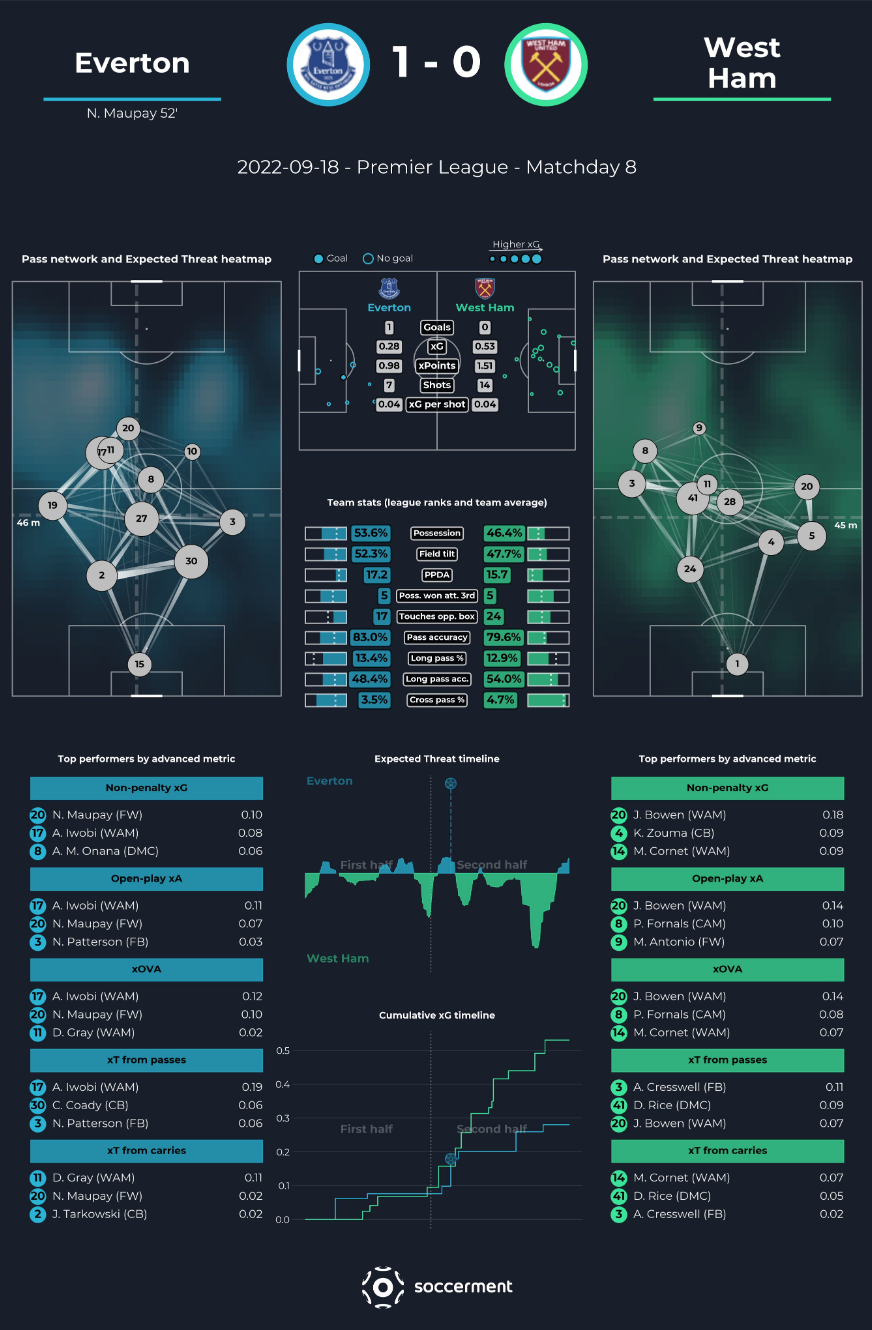 Souček was anonymous in possession despite occupying an important midfield role, forcing his teammates to funnel attacks to the left flank via Rice. His ball-shyness had a significant impact on the outcome, in no small part because it made West Ham’s attacks easy to predict and prevent. Advanced statistics provided by Wyscout underscore his struggles this term:

Souček’s quality speaks for itself when he is at his best, but West Ham’s rivals have cracked the code. By restricting his late runs into the penalty area, they have nullified him as an offensive threat, limiting his influence to midfield possession play – which is the weakest part of his game.

He would benefit from a shuffling of the pack at the London Stadium. The Hammers have been stale by their own admission this season, driving transitions through Rice because Souček is off the boil. But there are plenty of solutions available to Moyes, including one that would allow him to extract better performances from his current combination of starters.

West Ham could switch to a 4-3-3 by pairing Rice with Paquetá in central midfield and utilising Souček as a single pivot – an alternation that would kill three birds with one stone:

The Hammers are not a lost cause, and nor is their two-time Czech Player of the Year, but player and club must adapt to reverse their slide and blow the storm clouds away from Stratford.