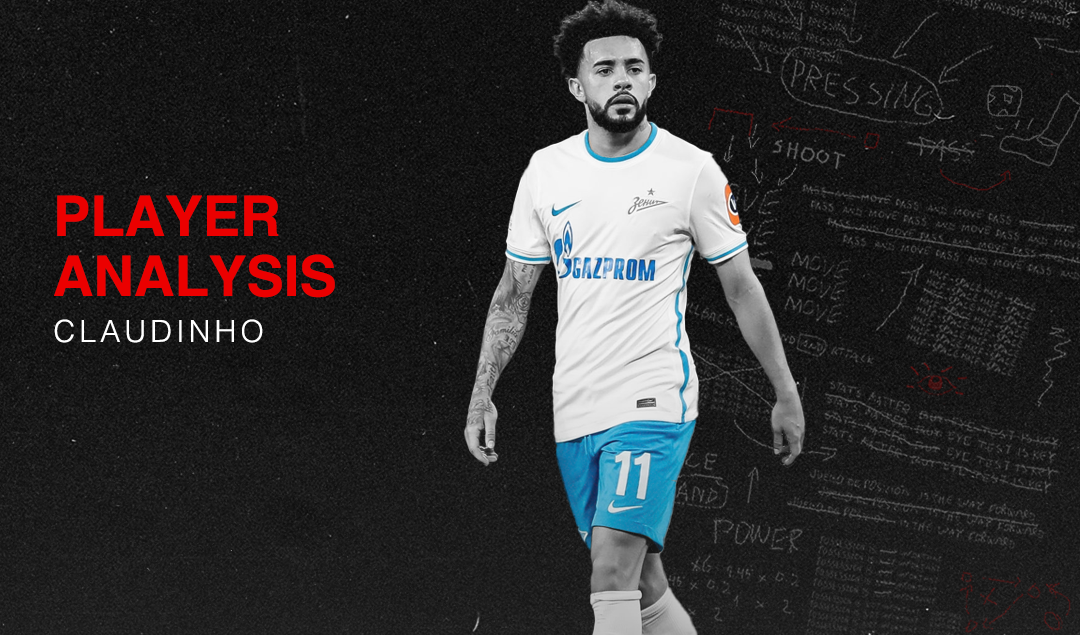 Guarulhos, a city in Brazil’s most populous state of Sao Paulo, has in recent times churned out talent in the footballing world from former Olympique Lyonnais captain Cris, to Arsenal’s current starlet Gabriel Martinelli. However, arguably one of the rawest and ripe talents could just be Claudinho, whose flair and eccentricity derives from the streets of Guarulhos, and the magic of Samba do Brasil.

From Humble Origins and a Slow Start

Whilst former head coach Mauricio Barbieri touted that Claudinho was among the very best “if not the very best” in 2020 in the Campeonato Serie A of Brazil, due to the magician’s ability to get fans off their seats via his creativity, it hadn’t previously ever been that rosy for the attacking midfielder.

Having been born in Guarulhos, a young Claudio Luiz Rodrigues Parise Leonel (Claudinho), had moved to Sao Vicente aged just 3 on the coast of Sao Paulo state. In this period, a young Claudinho would develop a love for football. By the age of 6, Claudinho began his journey at Santos’ academy, following in the steps of Neymar and Pele, however, within 2 years of this the youngster was deemed surplus to requirements, ending his time with the club prematurely.

However, where Mauricio Barbieri’s comments of excitement, creativity and skill can be derived from, is the path of Futsal that Claudinho took after his short stint at Santos. Between the age of 8 to early teens, Claudinho spent the time playing futsal across Sao Paulo joining the Peixe Futsal team.

Similar to likes of Philippe Coutinho and Neymar who have both described Futsal to have played a major role in their agile, attentive and elegant ways of playing the beautiful game; a synonymous playing style to Claudinho, filled with excitement and exuberance.

Neymar: The Star Too Far

Continuing on from the futsal days, the blueprint and joy that futsal left behind on Claudinho was one of raw talent and the stereotypical archetype of Samba Brasileiro that we associate with the greatest names to ever grace a football pitch.

However, this was yet to be discovered in Brasil in the manifestation of Claudinho. After signing for Corinthians in his early teens, this ultimately ended in failure in Tatuape, however a loan spell away from Corinthians to Bragantino in Serie B would prove to be pivotal in the future of the bright attacker.

Spell at Bragantino and the Future Away from Corinthians

Whilst the first loan spell at Bragantino didn’t go as well as planned, playing 18 matches with no goals and just a couple of assists, he wasn’t to know that this would later be the club where he stamps his authority in remarkable fashion. Instead, following the first spell he then undertook a short stint at club Santo Andre who currently play in the Paulistao A1, where he scored 4 goals in 16 matches in a more successful spell.

After a lacklustre time at Corinthians, Claudinho then moved to Ponte Preta on a 2 and a half year deal, however, the fanfare between Claudinho and Red Bull Brasil (which was Bragantino just a couple of years earlier when Claudinho first went on loan there), continued and would last a sustained period.

He went on loan there from Ponte Preta, and whilst registering only a goal in 11 matches, adored his time there, seeing him return to end the season again in the 18/19 season. Whilst impressing on his loan spell 2nd time round at the Estadio Nabi Abi Chedid, Red Bull Bragantino decided to purchase the Brazilian starlet from Ponte Preta in a deal worth $450,000 in 2019.

The True Beginnings of a Revelation

Whilst the energy drink magnate bought Bragantino, causing the creation of Red Bulls Bragantino, Claudinho found himself in Serie B, but getting used to life quite well. In 34 matches Claudinho was involved in 20 goals managing 9 goals and 11 assists in the attacking midfield (skewed to the left) role. Forming a good relationship on the pitch with Ytalo, RB Bragantino managed to gain promotion to the Serie A, with Claudinho as the focal point.

Moving into 2020 following the club’s promotion, Mauricio Barbieri’s appraisals for the young star, and the excitement of the league grew with the prospect of seeing Claudinho play and lighting up Serie B. His endeavours, elegance and utility quickly began to show going into the 2020/21 season, where Claudinho, in Brazil’s top tier emerged as the main attacking outlet for RB Bragantino, scoring on his debut (in Serie A for RB) against Santos, having played just 9 minutes. Redemption and payback hurting Santos…

Claudinho with a stunner to put Zenit 2-0 up not long ago. Cruise control in #ElKlasikov. pic.twitter.com/cfsUQeIyIS

However, this was just the start. Over the campaign Claudinho, through the middle as both an attacking and central midfielder showed clear glimpses of what he was about. Playing in Barbieri’s well-oiled side, Claudinho’s former manager recognised his talent from early, but acknowledged how amidst this, system and tactics were best suited for Claudinho. Barbieri stated how the team “tried to get the best out of him, [which] was important for him to have this great season”.

The trust placed in Claudinho in the season saw him register 18 goals and 6 assists in just 35 matches from a midfield position, highlighting the efficiency and prolific instincts, behind the flair and samba skills that are also a part of the package.

This form throughout the season, saw the RB Bragantino star to be called up to the Selecao for the Olympics, in which was an honour in itself for Claudinho. However, his performances in Brazil, meant that he featured in every match in the Olympic winning Brazil team which defeated Spain in the final to win gold. Jubilations and a move had to follow soon for the Europe-destined attacker…

Whilst a bid from Al-Ittihad was rejected by RB Bragantino, holding on to the star seemed a tough task, with many tipping Claudinho to move to fellow Red Bull-owned, RB Leipzig in the Bundesliga. However, it was Zenit Saint Petersburg that drew the eyes of the 24-year-old, and he joined the club in the summer of 2021 for a fee of £10,800,000, joining fellow compatriots, Malcom, Douglas Santos, and Wendel in Russia.

Life in Russia for the Star

Having been to every home game for Zenit this season, the most eye-catching and exuberant player has been Claudinho. The elegance, the skill, the flair has been unplayable at times, and intertwined with his joy off the pitch, particularly his relationship with Malcom, this has allowed Claudinho to express himself predominantly on the wide left of midfield where he has featured for the Russian outfit this season.

Starting the season and adjusting to life in Russia may have posed a problem to many players leaving their country for the first time to play football. However, Claudinho has featured very often this season and has insofar played a key role, registering 2 goals and 2 assists in 7 matches in the Russian Premier League and also a goal in the world’s most reputable club competition; the UEFA Champions League.

So far in the season, Sergey Semak has utilised Claudinho in the wide left, the opposing flank to Malcom, and has emerged as a key component for Zenit on the break, supplying crosses and deliveries in toward both Artem Dzyuba and Serdar Azmoun.

As the season looks to continue, and with Zenit proving to be ruthless champions, Claudinho will be a strong addition to Peter’s arsenal going forward and will offer creativity and flair to get the fans off their seats at the Gazprom Arena, and also send shockwaves around Europe.