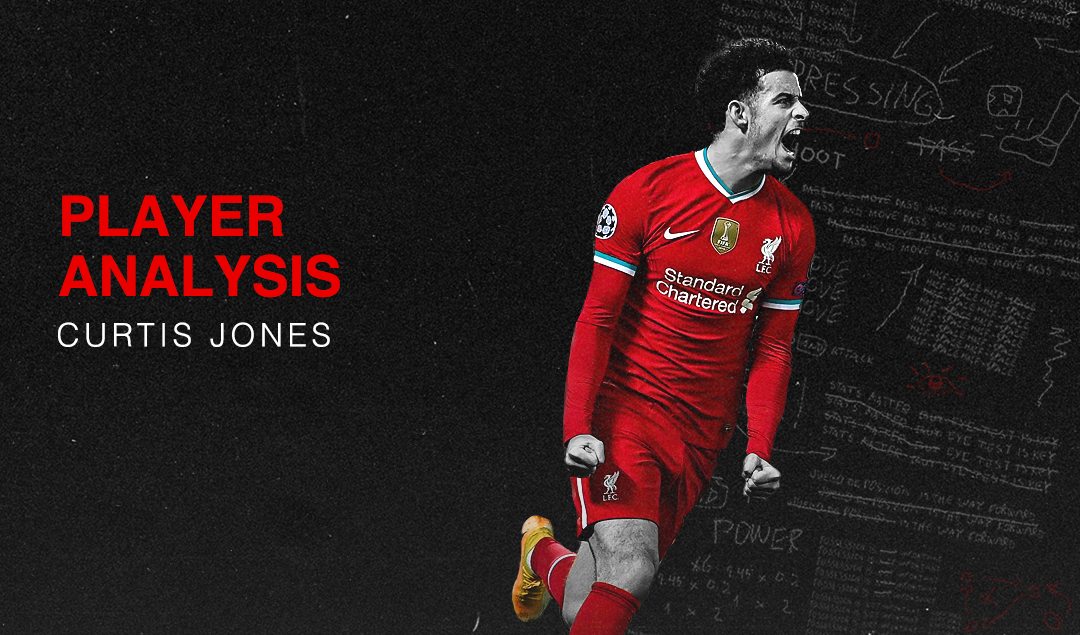 It all started with a Merseyside derby curler.

It wasn’t Curtis Jones’ first appearance in a red shirt, nor was it particularly the moment where he truly broke into the first team. But it was the moment, if you ask any Reds’ supporter, that etched the local lad into the hearts and minds of the Liverpool faithful.

Scoring a goal in a Merseyside derby is one thing, let alone a winner. But to do it when you’re effectively leading what was a second-string side against a stronger-appearing Everton, hoping to shake their Anfield malaise with an FA Cup victory. But Curtis Jones, a Liverpool lad who wasn’t even born the last time Everton won at Anfield, showed right then and there that he would encapsulate the heart of the city, in the same vein as Trent Alexander-Arnold has come to embody the city’s red heart.

That was last season, and this season has depicted the 19-year-old as the heart of Liverpool, but in an entirely different way. He’s not had a moment to get the blood pumping like his goal in the derby, but he certainly gets the blood of his football team pumping.  This season has shown Jones to be an imperative piece in Liverpool’s midfield. And it’s all the more important, given what they might be missing next season.

Georginio Wijnaldum’s contract is expiring at the end of the season; the man is an understated, often underrated cog of Liverpool’s midfield. The Dutchman is incredibly press-resistant – able to fend off the attention of opposition midfielders wanting to pick the ball from his feet, and many a time ensuring Liverpool have the few critical seconds to set the tempo of another attack. He doesn’t get the headlines as he does for his national team, but his role in midfield is critical.

In Jones, the heir to Wijnaldum’s throne is waiting in the wings. 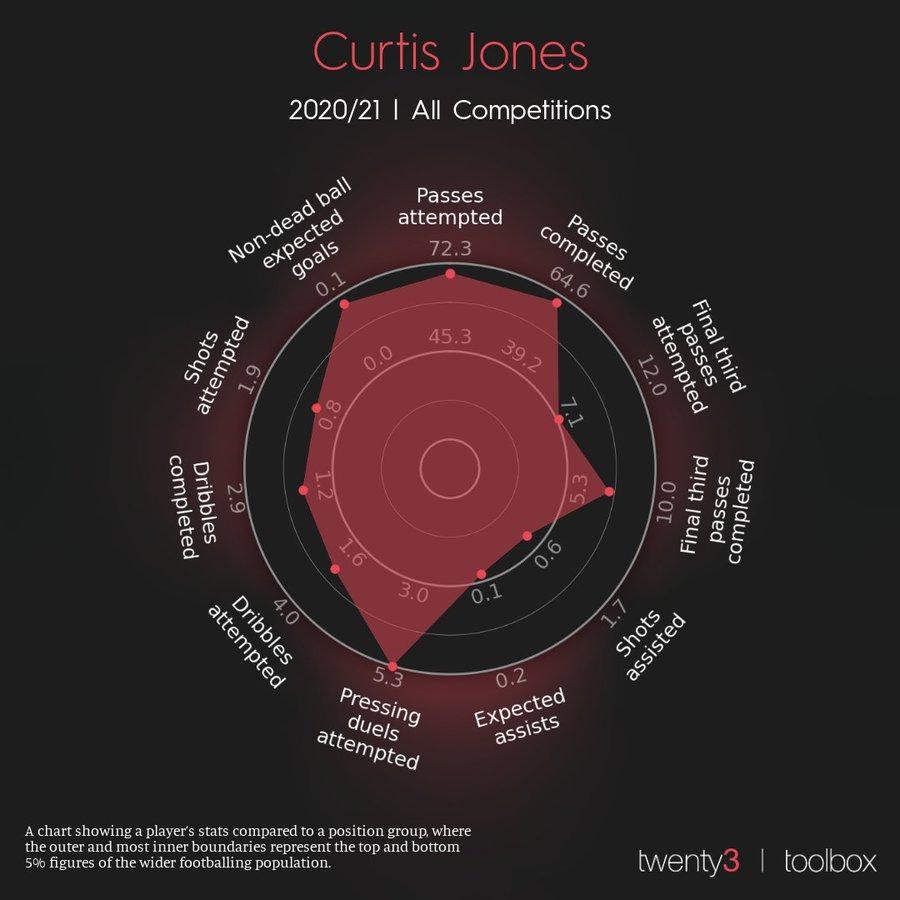 The added bonus, as seen above, being Jones is far more well-rounded than Wijnaldum. And, similarly to Gini, this season has seen him play in a more reserved midfield role – the ‘press’s metronome’, so to speak. He presses zealously, effectively engaging the opposition midfield into distributing wider – where Liverpool’s traps usually are – or forcing them into a rushed pass, effectively preventing the opposition from building through the middle. This isn’t necessarily new for Jürgen Klopp’s side – it’s practically a requirement – but what is staggering is the transformation.

When Jones was first introduced into the side, it was as an attacking, vertical midfielder. He was attempting through balls when he could, cutting in from wider positions and firing shots off (like the Merseyside derby winner), and occasionally underlapping into the box to provide support for the attackers. He looked like a fantastic prospect as a #10 – with the obvious issue being that Liverpool don’t use a #10 (besides, any #10 would just get in Roberto Firmino’s way).

What Klopp has done, however, is to prove you can mould young players into whatever you wish. Where the virtuoso #10 doesn’t necessarily have a place in Klopp teams anymore, the press-metronome who also fancies himself on the ball certainly does. It was a facet Wijnaldum could never quite bring to the role – the creativity on the ball – yet Jones has it in spades, meaning he’s become the multi-faceted heart of Liverpool’s midfield.

His pressing means he’s a perfect addition to the midfield – and, like in the Spurs game – it doesn’t require a significant shift of the balance in the middle of the park. Jones played in the Spurs game without Fabinho at the base of midfield, and was imperious in preventing Spurs from building anything through the middle: they were forced to go over.

Suddenly, the young scouser has gone from dazzling but peripheral to, when called upon, absolutely pivotal.

It’s difficult to properly measure Jones’ creative output this season – his expected assists and final third passes aren’t of the standard you’d expect from a former attacking midfielder – but the prospective weapon is there. That, in essence, is the point. Wijnaldum was a caged lion at times for Liverpool – and international football was his Sahara plain. 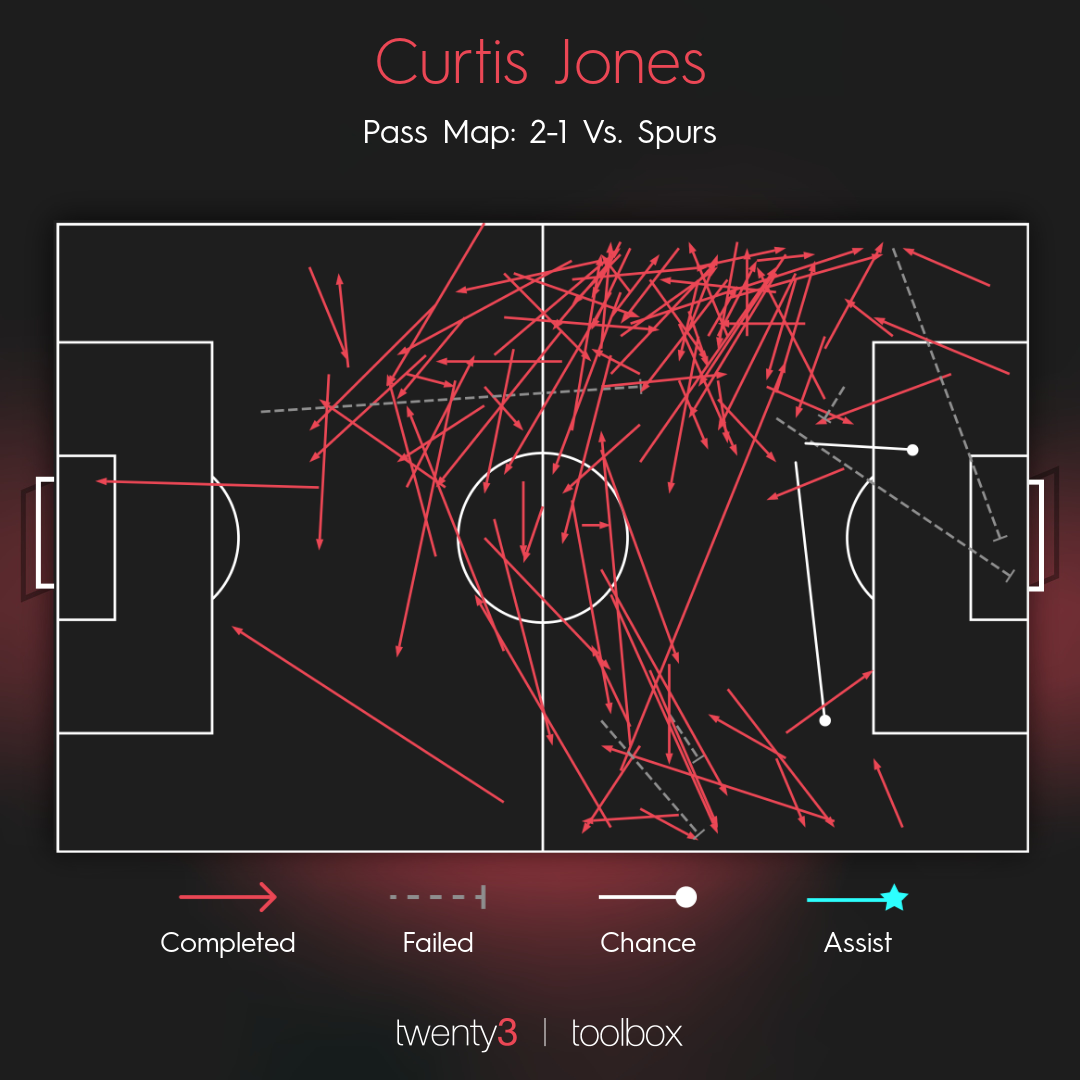 He is still creating chances, and the fact is Liverpool know that he can create chances. It’s possible that Jones, like Wijnaldum, will be caged into a more reserved, critical midfielder for the betterment of Liverpool’s flow and tempo. But to forget where he came from would detract from his prowess on the ball – especially when it comes to long-range curlers.

That being said, his most impressive prowess on the ball isn’t the stuff in the highlights.

If Liverpool’s impressive analytics team would be looking for anything in a Wijnaldum replacement, the list would read: 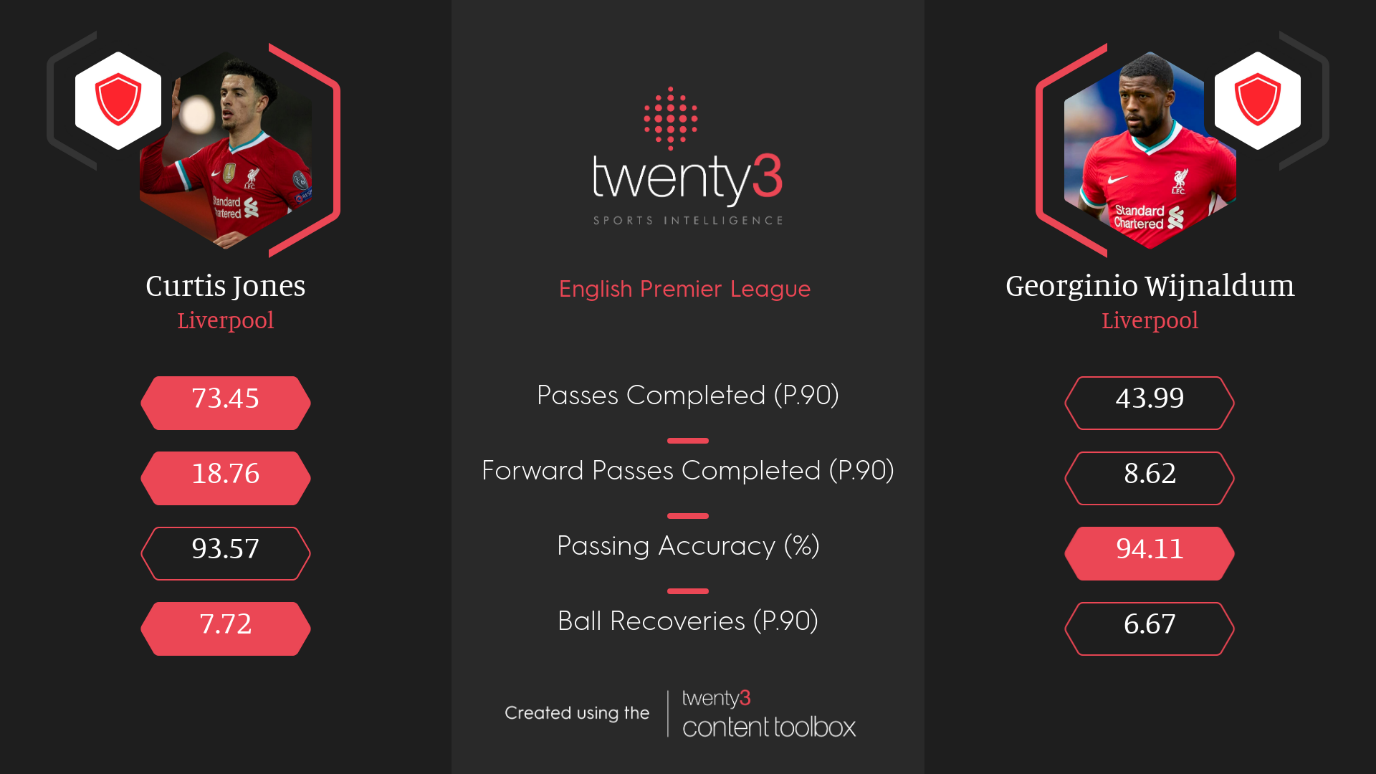 The thing about Jones that’s been so impressive hasn’t just been that he’s become an ideal Klopp midfielder without the ball, it’s that he never loses the ball when he’s got it. The notable stats from the above graphics include two important numbers: the number of passes he completes per game, and his passing accuracy.

The lithe, agile scouser has a distinct ability to keep the ball at his feet when faced with an oncoming opposition midfielder, in tight spaces. Partnered with Wijnaldum, the ball more often than not was fed into the feet of Liverpool’s forwards or fullbacks by the midfield, meaning Spurs were almost forced into sitting deep for much of the first half.

That kind of press resistance is key when support hasn’t yet arrived in transition, or when Liverpool want to keep the ball and lower the tempo. Amongst midfielders who have played at least 600 minutes, Jones has the fourth-best passing accuracy rate (10th overall) in the Premier League with 93.6%, only behind Leicester City’s Nampalys Mendy, Arsenal’s Mohamed Elneny, and Wijnaldum.

For every 20 sideways passes that tick over possession, there is going to be an opposition’s ambitious attempt to nab the ball from the feet of the young midfielder. And Jones, more often than not, keeps the ball, able to progress Liverpool forwards with bustling energy and verve.

In conclusion, Liverpool are evolving. The kid who stole the hearts of Liverpool fans all over the world with a Merseyside derby pearler is now energising the heart of Liverpool’s midfield.  It’s difficult to predict what Curtis Jones will become; his creative habits have been inhibited by his current role, but his current role is also exacerbating the complete midfielder that Jones could become – perfect for a Jürgen Klopp side.

Either way, the Kop will likely be singing his name very soon.