Ligue 1 has become a reliable place for producing and developing young talent of late and it isn’t stopping now. In today’s piece, we will be looking at a player from Lorient who is starting to gather some attention due to his performances this season so far.  Dango Ouattara, a Burkina Faso international attacking midfielder is starting to make a name for himself in Ligue 1 this season. In just 8 games this season, he has already scored 4 goals and provided 5 assists.

In terms of Ouattara’s career, it’s been a fairly straightforward one. He moved from Burkina Faso’s SC Majestic in 2020 and was placed in the Lorient B team for a season before being introduced to the first team. In the 2021/22 season, he made 7 starts during the whole campaign, but this season he has started in each of the 8 games played so far. In terms of national appearances, he has made 9, scoring 4 goals in the process. 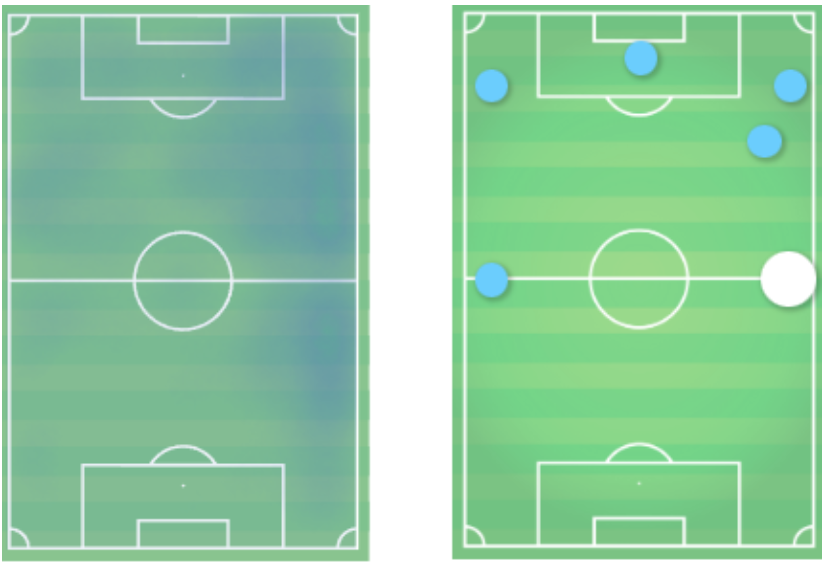 Dango mainly operates on either side of the wings however, his preferred side is the right as he will look to cut inside by using his stronger left foot. The above graphic from Wyscout displays this however, the actual positioning appears to change game by game. In the next section, we will be doing some data analysis of attacking players in Ligue 1 based on stats this season thus far.

Firstly, we take a look at the Ligue 1 forwards in terms of their XG vs XA (Expected goals vs Expected assists). Here we can see that Dango is ranked just over 1.5 for XA and just under 2 for XG so far in his 7 games. The next part will then show the actual goals scored along with assists. 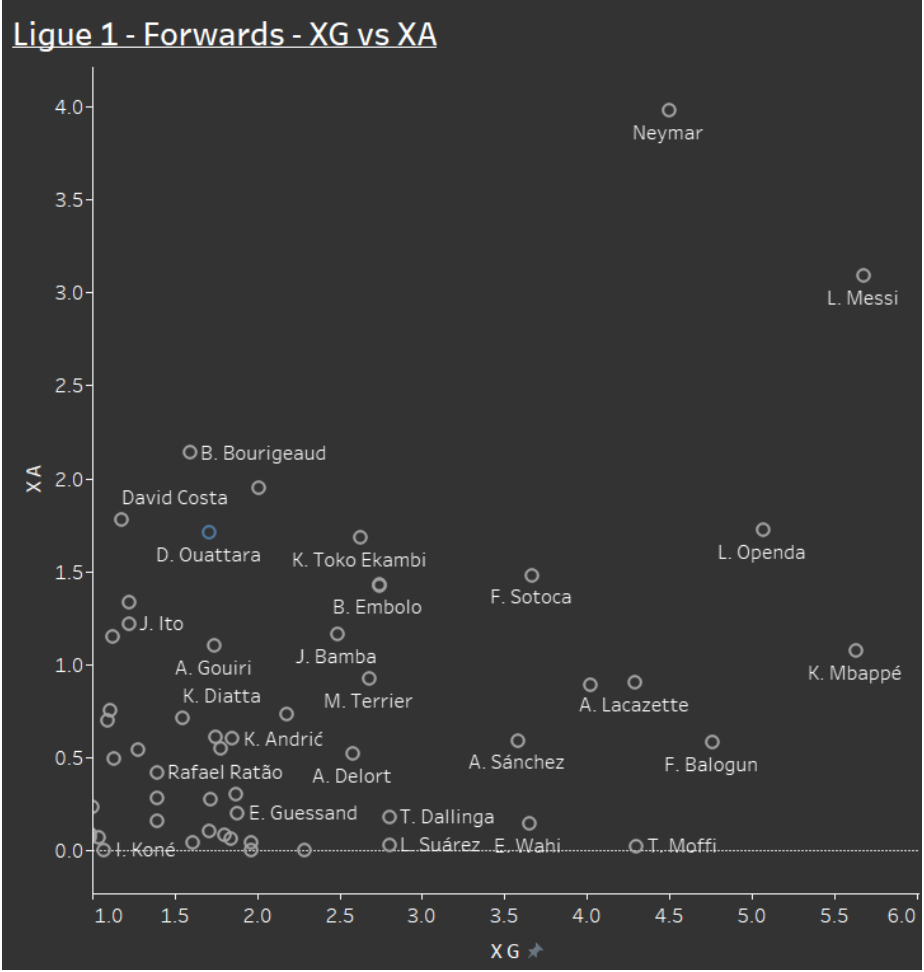 As mentioned, here we can see goals vs assists so far in the season. Dango has actually scored 3 goals and contributed to 4 assists which is pretty impressive at this stage of the season, especially ranking just behind Lionel Messi and Neymar. 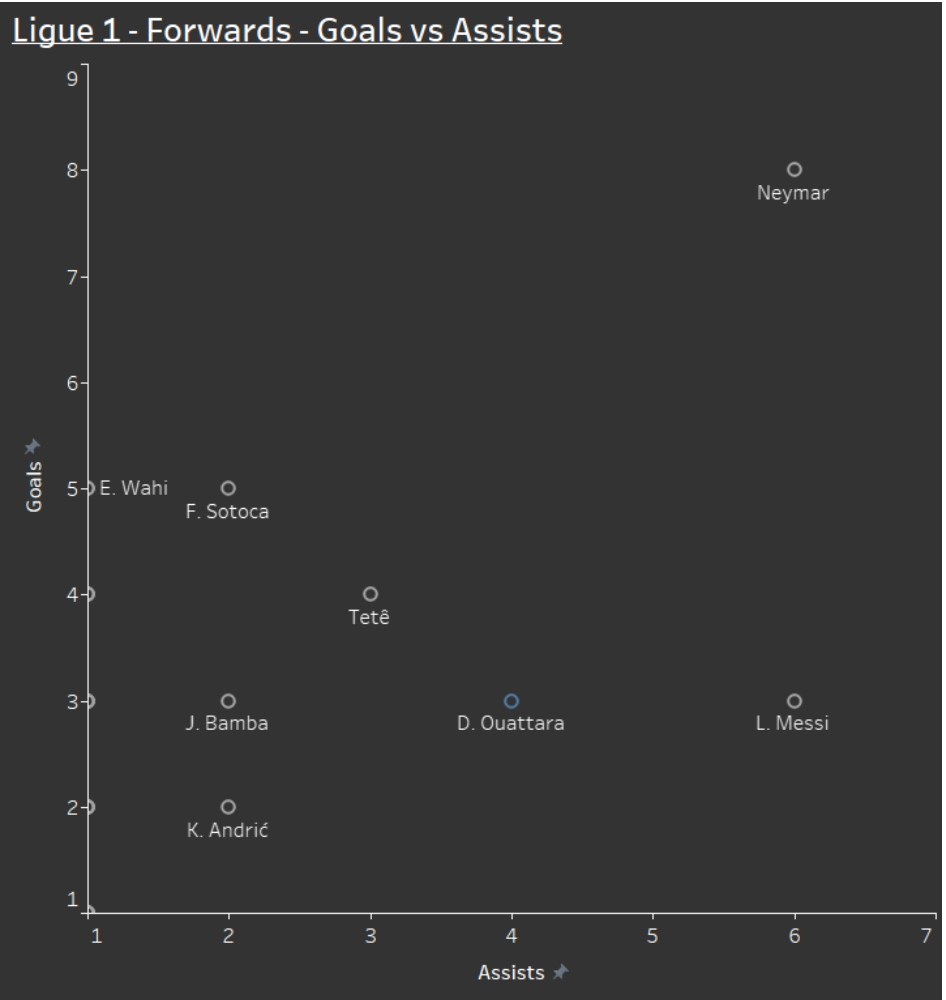 Now we look at the shots per 90 against shots on target percentage. For these metrics, Dango is actually ranked just below average it seems. If we are looking for any type of improvement in the Lorient man, then it would be in this department. If he improves his shots on target, he is then of course more likely to score more goals. The metrics for shots per 90 will perhaps improve as the season progresses and continued game time. 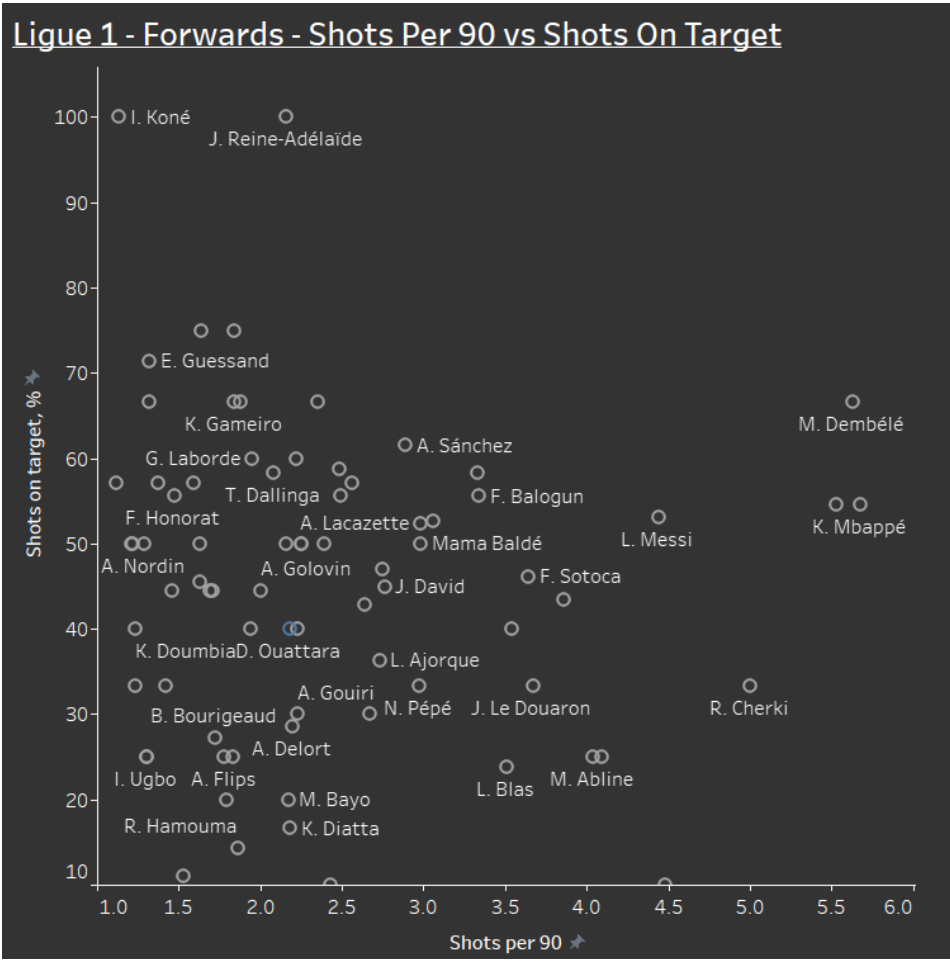 This time we look at the forwards in terms of their duels per 90 vs the amount won during the 90 minutes. As per the below graph, we can see that Dango his ranked just above average for these metrics and data suggest that he is someone that tracks back and wins just under half of his duels made. 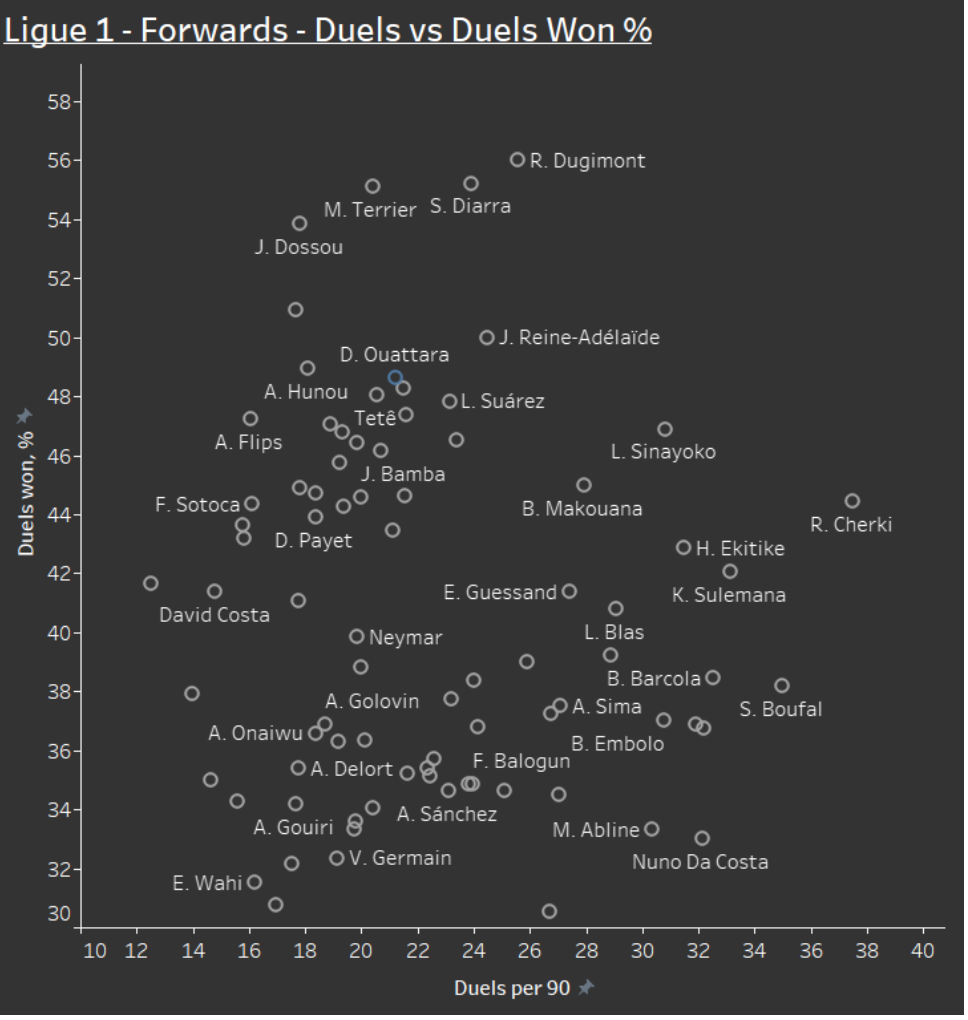 In this section, we will cover some in-game video analysis to showcase some of Dango’s main attributes.  Firstly, we look to provide some context around the metrics measuring Dango’s duels. Here we can see that Dango is chasing back and ends up winning the ball, before setting his team off on the counter. This can provide to be a good attribute to have, especially for a modern-day wide forward.

This time, we provide a sample of one of Dango’s goals scored this season. Although not a shot from far, this goal was scored from his weaker right foot, and he made a great proactive run in the box to get on the end of a great ball too.

This time Dango intercepts and then looks to provide an intelligent assist which ends up being a goal for Lorient.

Finally, we can see that Dango makes a great off-the-ball move which puts him in a great position to get in a great ball into the 6-yard box which was missed ever so slightly.

Based on the above analysis, we can see that with more game time, Dango Ouattara is starting to improve and become a key player for his side. We have seen some great metrics which showed Dango has great potential and providing for his side however, we also seen where there can be room for improvement.

Personally, with more game time and development, Ouattara can become someone that could move onto bigger things. He has good work rate as well as being a pacy wide forward who loves to cut inside from the right, which proves to be a danger for sides.

At present, there hasn’t been much talk in terms of the future for Ouattara as he has only just started to gather some attention. I personally think if he continues to have a good season, after an amazing start then in the summer next year, there will be clubs looking into the young man for sure.