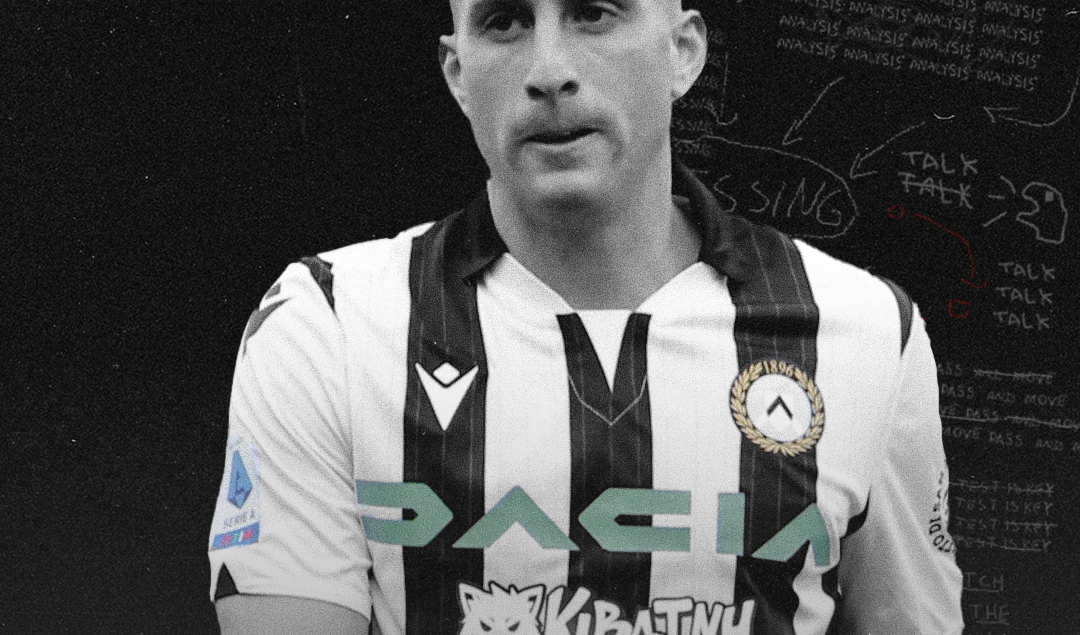 Gerard Deulofeu has had quite the journey throughout his footballing career so far, rarely staying a club for more than two seasons and partaking in numerous loan spells.

The 28-year-old had come through the Barcelona youth system, and earned over 80 caps for Spain in various youth categories, but he has only represented the senior team four times and not lived up to the early expectations placed upon him.

After a disappointing first campaign at Italian club Udinese plagued by knee problems, Deulofeu bounced back in 2021/22 and arguably had the best season of his career, scoring 13 goals and supplying five assists in 34 Serie A matches for the Zebrette.

The club was crying out for a talisman after the sale of Argentinian midfielder Rodrigo De Paul to Atletico Madrid and the Catalan winger demonstrated that he was more than capable of filling the void. Thanks to his heroics in Udinese, the 28-year-old has been linked with the likes of Roma and Napoli. 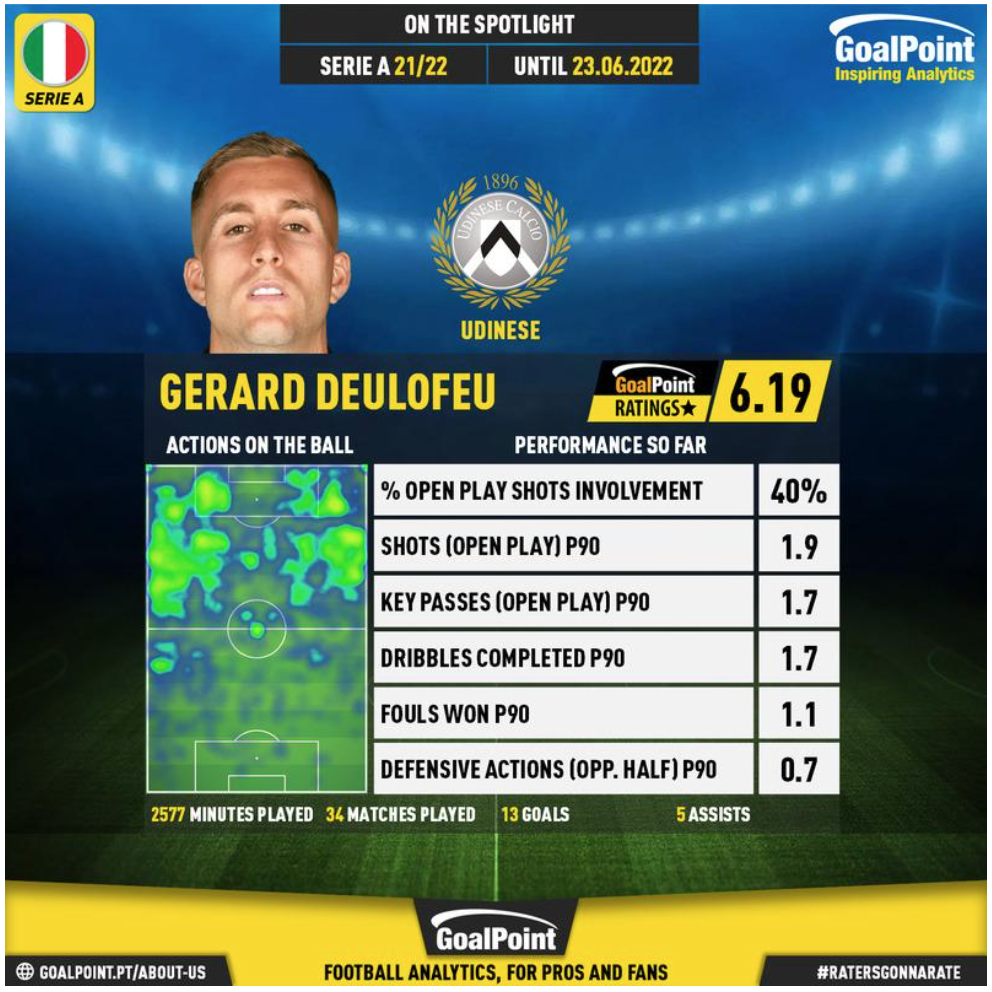 Under Coach Luca Gotti and his replacement Gabriele Cioffi, Udinese played in the 3-5-2 formation with Deulofeu operating as a support striker. Although the side from the Friuli-Venezia Giulia region played on the counter-attack, the Spanish forward was often in the opposition half and he was rarely present in his own half according to the heat map from GoalPoint.

Despite the lack of presence in his own half, it is clear that he was entrusted to provide creativity in the attacking third and his offensive talents would be better utilized if he was not forced to track back. Interestingly enough, even if Deulofeu did not run up and down the pitch, he was still able to drift from side to side. The heat map indicate that his presence was greater on the flanks than in the middle and that he did not favor one wing over the other.

According to GoalPoint, the Udinese forward has several impressive offensive stats. In addition to scoring 13 times, more than any other Zebrette player in 2021/22, he also had a shot in open play involvement of 40 percent. Evidently, it shows that his ability to score was just as important, if not more important than creating scoring opportunities for his teammates.

On average, Deulofeu had 1.9 shots in open play, made 1.7 key passes in open play, completed 1.7 dribbles, and earned 1.1 fouls per 90. Udinese was a team built to play through the Catalan and the opposition knew it. When he did get the chance to do something with the ball, it would impact the Friulani in a positive way and the opposition also had to target him to limit the threat he possessed.

Defensively, Deulofeu was certainly less impressive with just 0.7 defensive actions in the opposition half per 90. However, playing in a team that would hit on the break, there was little requirement for the forwards to the press opposition defenders whenever they played out from the back. 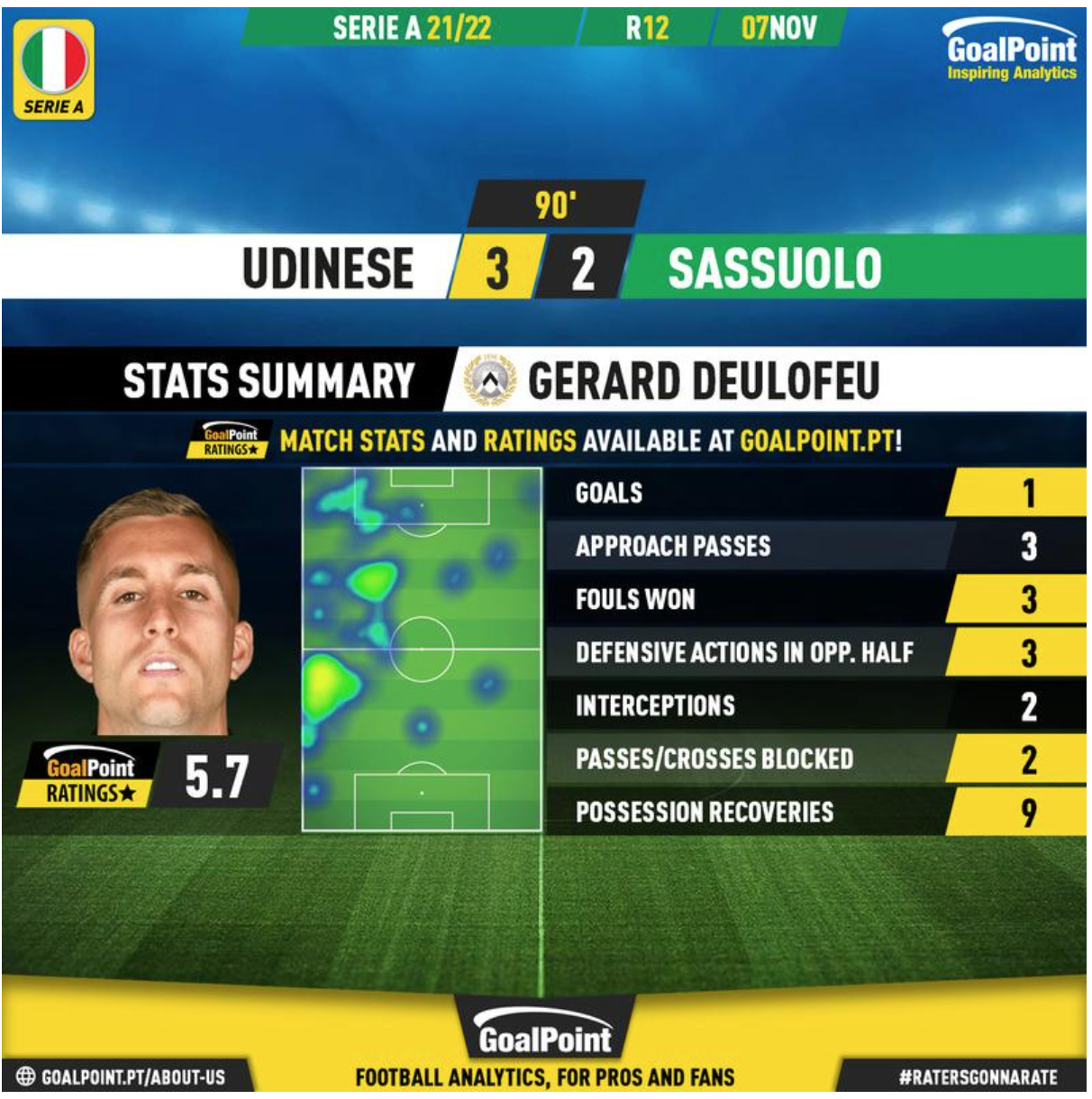 One of the matches in which Deulofeu made an impact in was the 3-2 victory against Sassuolo in Week 12, a game in which Udinese lead 1-0, squandered the lead to trail 2-1, and then regain its advantage.

The Spaniard opened the scoring after running onto a low Rodrigo Becão cross from the right and the goal for 2-2 came from Sassuolo’s inability to properly clear a Deulofeu free-kick from the right-wing.

Offensively, he also made three approach passes and he drew three fouls from the Sassuolo players. The Spaniard also impressive in some his defensive actions against the Neroverdi, making three defensive actions in the opposition half, two interceptions, two blocks, and nine possession recoveries.

The heat map also highlights an anomaly in Deulofeu’s positioning. Udinese coach Luca Gotti implemented the 4-2-3-1 formation and he placed the Spaniard on the left-wing, hence showing his regular presence in this game on the left flank. 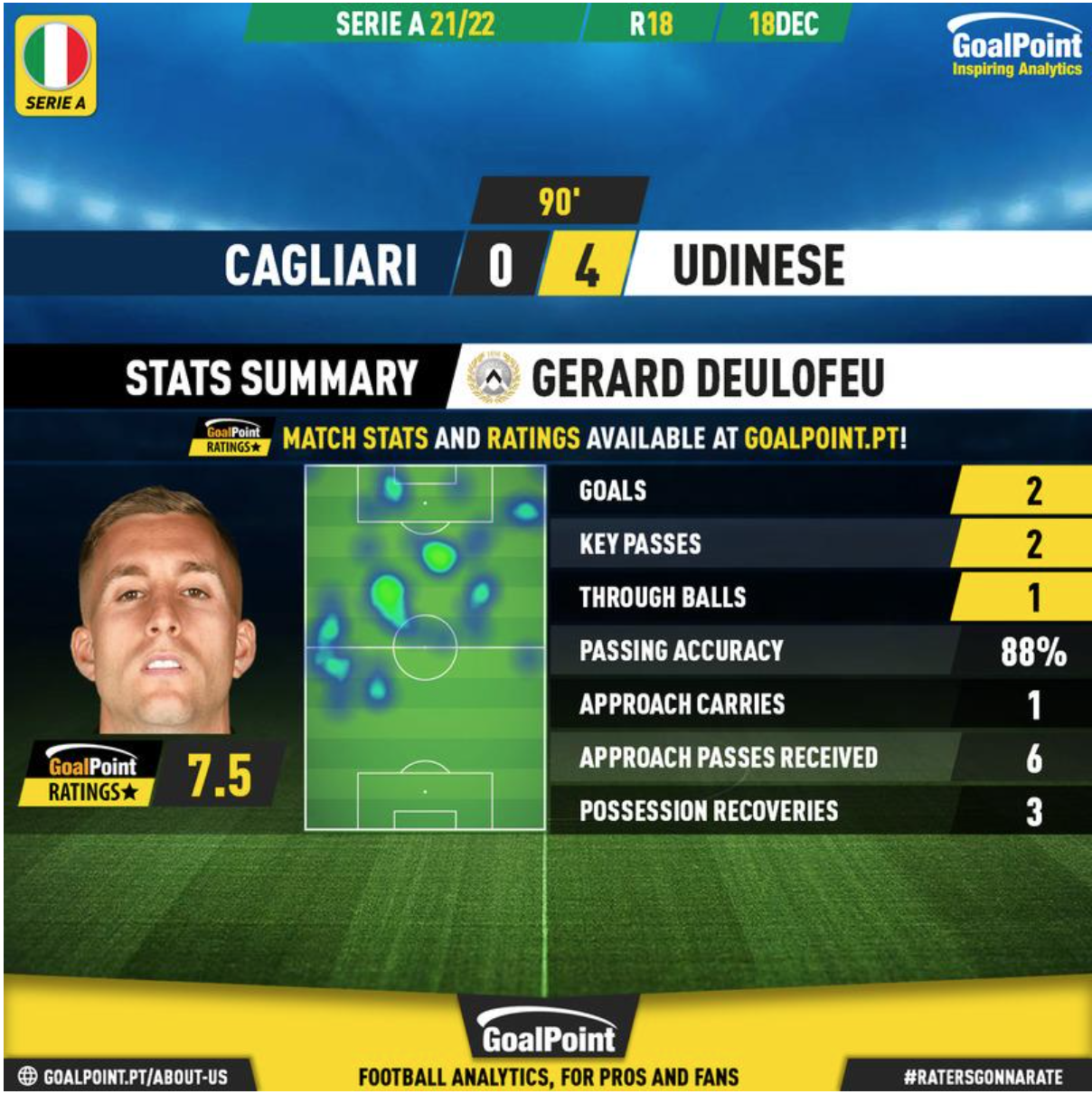 Arguably the best performance of the season from Deulofeu was in Udinese’s emphatic 4-0 victory against Cagliari shortly before the Christmas break. Manager Gabriele Cioffi implemented the 3-5-2 and utilized the Spaniard as a support striker. It was a move that clearly worked as the Zebrette forward scored twice in a match for the only time of the season and both strikes certainly captured the imagination.

Deulofeu double Udinese’s lead on the stroke of half-time with a free-kick that dipped over the wall and caught Cagliari goalkeeper Alessio Cragno unsighted. Meanwhile, his second goal and the fourth for the Friulani in the game sealed the win just over 20 minutes from time when he curled a shot from the left-wing and the ball had enough elevation that it was able to loop over Cragno in the Isolani goal.

In addition to the goals, he made two key passes, one through-ball, and one approach carry, and he also received six approach passes. His passing accuracy was at 88 percent and he also made three possession recoveries.

The heat map illustrates that his movement was sporadic but he demonstrated that he did not need to move a lot to make an impact. In the moments when he had the ball, Deulofeu was decisive and Cagliari found no solutions to contain him. 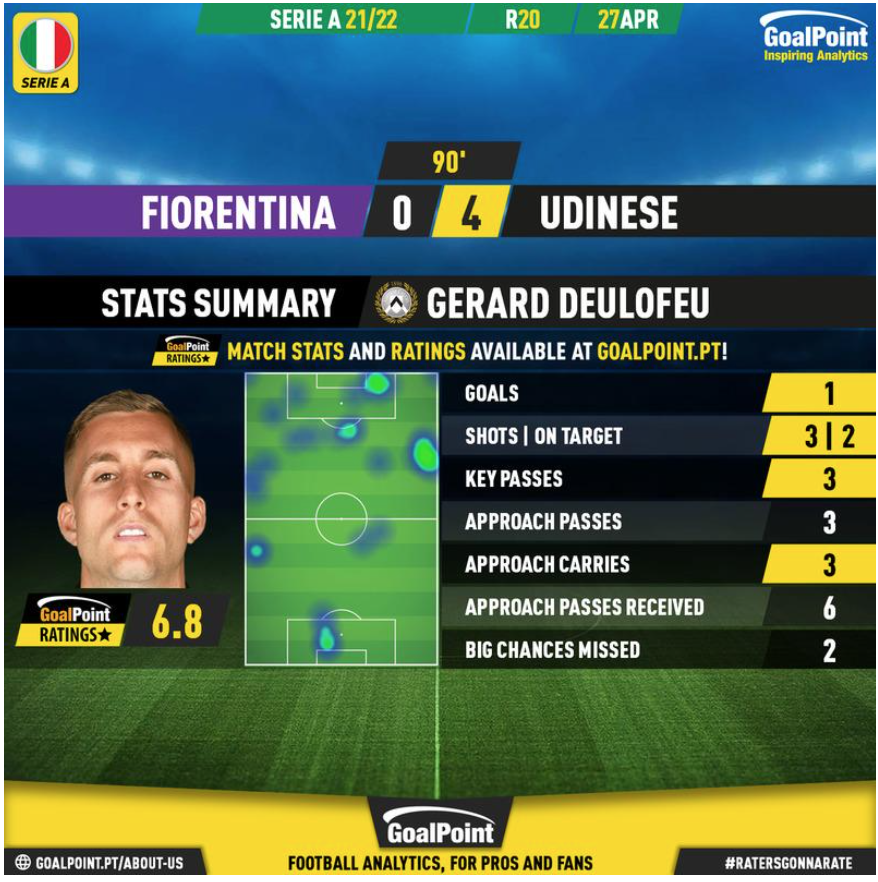 In this catch-up fixture which was played on April 27, Deulofeu starred in Udinese’s 4-0 thrashing of Fiorentina in Florence and he scored his team’s second goal in this Serie A encounter.

Like in the victory against Cagliari, the Catalan forward did not cover a lot of ground, but he remained a danger whenever he had the ball. He was ranked first for key passes and approach carries with three each while he also made three approach passes and received six approach passes.

His Udinese teammates look to him to create play and they know that he can do something with it. Even if he is not the assistman, Deulofeu is often an important part of the Zebrette’s play going forward.

Despite the comprehensive win, he did have three shots with two on target and he had two big misses. One of them was when Udinese launched a counter-attack and the Zebrette forward shot straight at Fiorentina goalkeeper Pietro Terracciano. Considering the potency of Udinese’s counter-attacks against the Viola, Deulofeu certainly could have added further gloss to the result.

Gerard Deulofeu has always been considered to be a talented footballer but his impact in games and consistency was not often there. Throughout the 2021/22 campaign with Udinese, he was given the trust to be a creator and scorer for the Friulani, and his performances ensured that relegation from Serie A was avoided.

At the age of 28, Deulofeu should still be at his peak, and although he is contracted to Udinese until June 2024, it is not a surprise that a move away from Udine is on the cards. With the right coach and environment, his mercurial talents could be of use to many other teams in Europe.