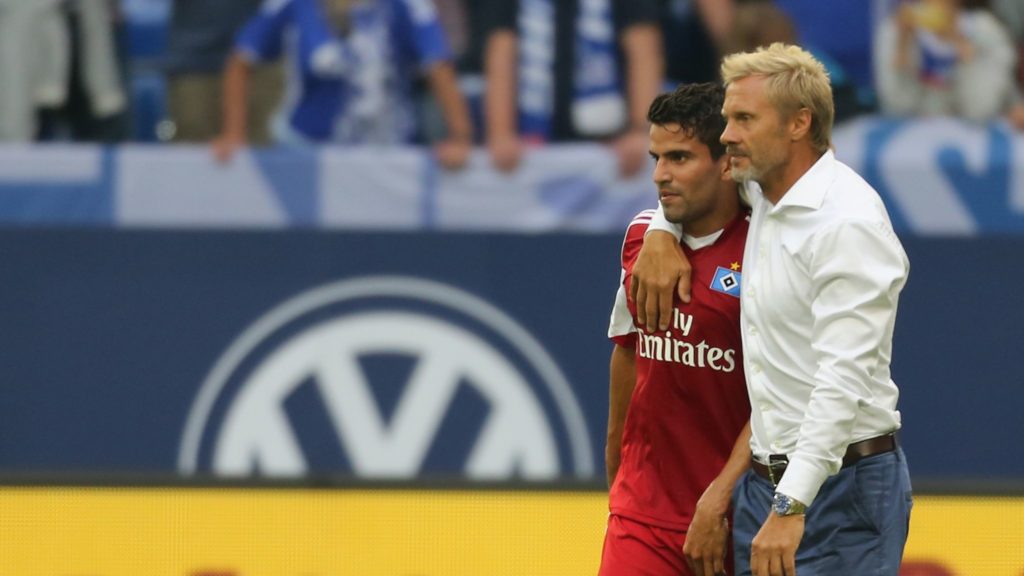 Rincón played the youth game for Unión Atlético Maracaibo, a now defunct club based in the capital of one of Venezuela’s largest states, Zulia. A stint with Zamora in the neighboring state of Barinas would hand him his first long form burst of professional experience before returning to his birth state of Táchra to play for Deportivo Táchira, one of Venezuela’s most decorated clubs.

Handed his senior Venezuelan National Team, or La Vinotinto, debut around the same time, Rincón was building a serious profile globally. It would pay off with a loan to Hamburger SV in the winter of 2009. He’d been 21 for 17 days.

The club had finished in fourth the season before and the relatively unexperienced Rincón struggled to fit in as more than minor substitute. He’d manage a club debut and several minutes in a DFB-Pokal win over Wehen Wiesbaden, a 2-3 victory over Galatasaray in the UEFA Cup, and his only league appearance that season in a 1-0 win over Hoffenheim.

His one start would come against NEC Nijmegen in the UEFA Cup, where’d help triumph over the Dutch club in a 1-0 win. The game, his only 90-minute session that season, would cement his continued development as a defensive midfielder, capable of helping in the attack but largely dedicated to cutting off the opponent’s.

His first half-season with the club would feature few highlights and few minutes, barely 100 in the end. With that said, his loan would cover the first half of the next season and provide more time to impress.

The 09/10 season would indeed prove Rincón’s to take. The Venezuelan would log 709 minutes across competitive fixtures for the remainder of his loan, playing as both a defensive midfielder and a right back.

Hamburg would manage an 8-9-5 record for the second half of that loan when Rincón played. Beyond the numbers, the performances were enough. Hamburg signed him on until the summer of 2014 for a reported fee of 513,000 USD, roughly 470,000 euros.

It’s there, finally beyond the hassles of being benched or hoping for a proper contract, that the modern Rincón begins to show up in the trenches for Hamburg. It’s there that el General, a ruthless midfielder, would make the global stage.

Rincón would return a full-time employee of Hamburg, playing in eleven of the remaining post-winter matches the side faced in the Bundesliga. He would start nine of those. The club would finish seventh, somewhat distant from their hopes of the last two seasons, in which they finished fourth and fifth.

The lack of European table-finishing would, however, be complimented by a deep run in a recently rebranded Europa League. The Venezuelan would help guide Hamburg through wins against Celtic, Rapid Vienna, PSV, Anderlecht, and Standard Liège. However, the side would fall short against Fulham, losing 2-1 on aggregate. Rincón, it should be noted, only played 32 minutes over both legs, rested for league play.

At the end of the season, Rincón had helped Hamburg to a deep European run and an acceptable table finish, picking up seven yellow cards in all competitions and no goals or assists along the way. It would be fair to say at this point that a pattern had developed.

Hamburg, with no Europa League matches to look to, finished 8th the next season, falling short again of European football. The relegation of their rivals, St. Pauli, may have provided a lightening of the mood, but table position and a short cup run reflected a side that wasn’t meeting the standards of a few years prior.

Rincón played 19 league games that season, with international breaks and some minor injuries cutting his late season appearances down to just three after January. The yellow card count went down to three in all competitions, but again no goals or assists came from the Venezuelan.

The summer of 2011 would bring a highlight for Rincón, who registered 419 minutes across five games in the Copa América for Venezuela. La Vinotinto would reach the third-place match, where they lost 4-1 to Peru. It would be Venezuela’s deepest run in the Copa América to date. Rincón captained the side twice and provided an assist in a 3-3 draw with Paraguay, who eventually lost in the final to Uruguay.

Rincón would follow a pattern from Hamburg, earning fifteen yellow cards for Venezuela during the 2009-2014 period he was playing club football in Germany. At one point, in 2010 and 2011, Rincón would manage to be booked five appearances in a row across five friendlies.

It should also be noted that he received two red cards in the 2011 edition of the Copa América, two of the three he’s received in his 11 years with la Vinotinto.

It’s easy to see how a reputation for talent mixed with an edgy, sometimes unnecessarily edgy, playstyle developed for the midfielder.

While his first stints as captain of the Venezuelan national team were beginning to appear, his club form was indeed stalled. The 2011-2012 season wouldn’t help. The club would finish 15th, just five points from the relegation playoff spot. Rincón would feature 27 times, earning eight yellow cards and managing an assist.

The club’s struggles could be argued to be most up to the inability to win. The club suffered several losses to more successful sides from Dortmund, Bayern Munich, Schalke, and Stuttgart, but would also draw a dozen matches, winning only eight. The season’s highlight would be making the round of 16 in the DFB-Pokal, the furthest Hamburg had managed in several seasons.

The next year would bring a surprise improvement, with Hamburg marching up to seventh place again with a solid string of performances from Rincón in toe, but the 2013-2014 season would sink them back down, with the club forced to win a relegation playoff against Greuther Fürth to stay in the Bundesliga.

The signs of Hamburg’s eventual sinking to the 2. Bundesliga were becoming clear, and it soon became clear that a change of staff was in order.

In a 2017 article via Bleacher Report’s Adam Digby, published in connection to Rincón’s transfer to Juventus, journalist Daniel Busch detailed Rincón’s role in Germany, along with why things didn’t seem to work out.

“Rincon spent five-and-a-half seasons at the Volksparkstadion after arriving in January 2009,” Busch told Bleacher Report. “He immediately tried to settle in, learn German and got involved with Hamburg and his team-mates… HSV never found consistency during his time here, making it difficult for the team to develop something on the pitch.”

“Rincon quickly became a fan favourite because of his dedication and hard work on and off the pitch,” Busch explained. “He was one of the most professional players to have worn the Hamburg shirt in recent years. [He] always gave it [his] all and showed huge passion and identification for the city of Hamburg and HSV.”

Rincón would never score for Hamburger SV and only one assist would find its way into his resume. He would earn 26 yellow cards along the way, with two combining for his one red card while with the club. He would complete 128 appearances over five years.

Rincón would develop his on-the-pitch identity at Hamburg and carry it without him across the globe for club and country. The midfielder was quite simply not fortunate in front of goal.

He’s scored one goal for Venezuela, a penalty, despite being the country’s third most appearing player at 100 caps. He didn’t find the back of the net once for Juventus in his 19 appearances. His highest goal count is five for Torino after 87 appearances, a ratio that far surpasses his usual rate.

The Venezuelan, however, makes up for this with an intense dedication to his roles as a defensive midfielder, along with a good ability to move the ball forward and build out of the back.

Allan Jiang looked deeply into Rincón’s style for Bleacher Report in 2014 amid the beginning rumors of his departure from Hamburg. His article targets on Rincón’s focus on tackles and frequent conflict with the referee’s book.

“Rincon’s fouls per game since the 2009-10 season have ranged from 1.4 to 2.9, so he is always playing on the edge,” Jiang explained. “This was illustrated in the 3-2 defeat to Mainz, as 16 minutes separated Rincon’s first and second yellow card.”

Jiang extrapolates that the defining moment for Rincón is his relationship with the referee that day.

“The impact Rincon has on games is dependent on how lenient the referee is on the day,” Jiang continued. “Lax officiating enables him to accumulate easy tackles. Strict officiating limits any meaningful influence Rincon can have.”

Rumors would grow over the course of late 2013 and 2014 that Rincón was headed for Wales or England, including reports from Sky Sports that Cardiff City, under Ole Solskjaker’s watch at the time.

Sky Sports and others, like FourFourTwo, would also report on rumors that Rincón was set to join Hull City. Thomas Zocher’s article for Sky Sports reported that, “Hamburg coach Thorsten Fink… is aware of the need to trim his squad and would be willing to consider a bid for Rincon.” Like the Cardiff reports, they would prove somewhat incorrect.

Rumors, however, would mean little by the time the real transfer came. The Venezuelan, at this point the definitive captain of la Vinotinto and a veteran of the Bundesliga with over 100 appearances under his belt alongside bright moments in the DFB-Pokal and Europa League, would not be heading to the UK.

On July 31st, 2014, Rincón became a Genoa man on a free transfer. It would be the beginning of a still-ongoing journey throughout Italy and Serie A. El General would become a cog for one of Italy’s oldest football clubs. Soon, it would become clear that Hamburg had been just the beginning.