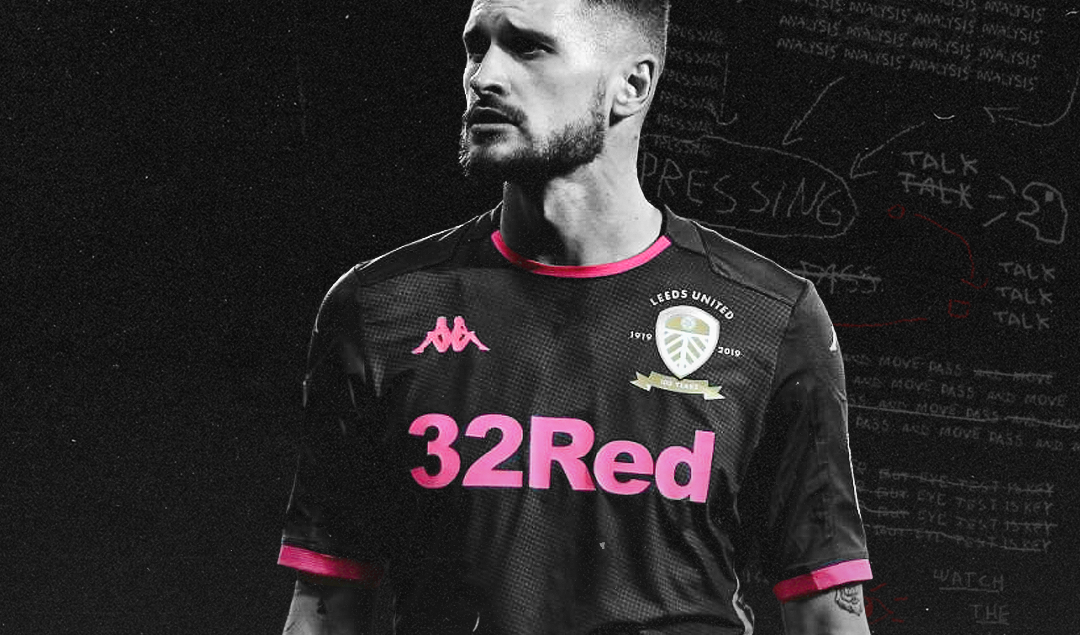 “What a day to be alive. F**k me,” slurred Mateusz Klich, just hours after Leeds United’s return to the big time had been confirmed.

Emile Smith Rowe’s excellently taken late goal saw Huddersfield Town do their nearest and dearest rivals a huge favour, as the Arsenal loanee’s winner was enough to seal promotion for the Whites.

Klich, along with the rest of United’s first team squad, huddled around a television in one of Elland Road’s executive suites, with winger Jack Harrison capturing the moment John Brooks’ final whistle spelled the end of Leeds’ 16-year-exile from the top-flight.

The players, expecting what should have been a routine West Brom win just a few miles down the M62, arranged a quiet gathering at the ground on the small chance that Danny Cowley’s Huddersfield could get a result.

As chaos erupted inside Elland Road, the East Stand quickly became surrounded as thousands of euphoric, relieved and emotional fans descended Beeston Hill en-masse to celebrate a return to the Premier League after a turbulent absence.

Tears were shed and beers were drunk as the Polish international, along with his fellow players, celebrated their achievement.

“We should all be very grateful that Mateusz Klich can play football better than he can drink,” wrote managing director Angus Kinnear in his programme notes ahead of the final game of the season against Charlton. 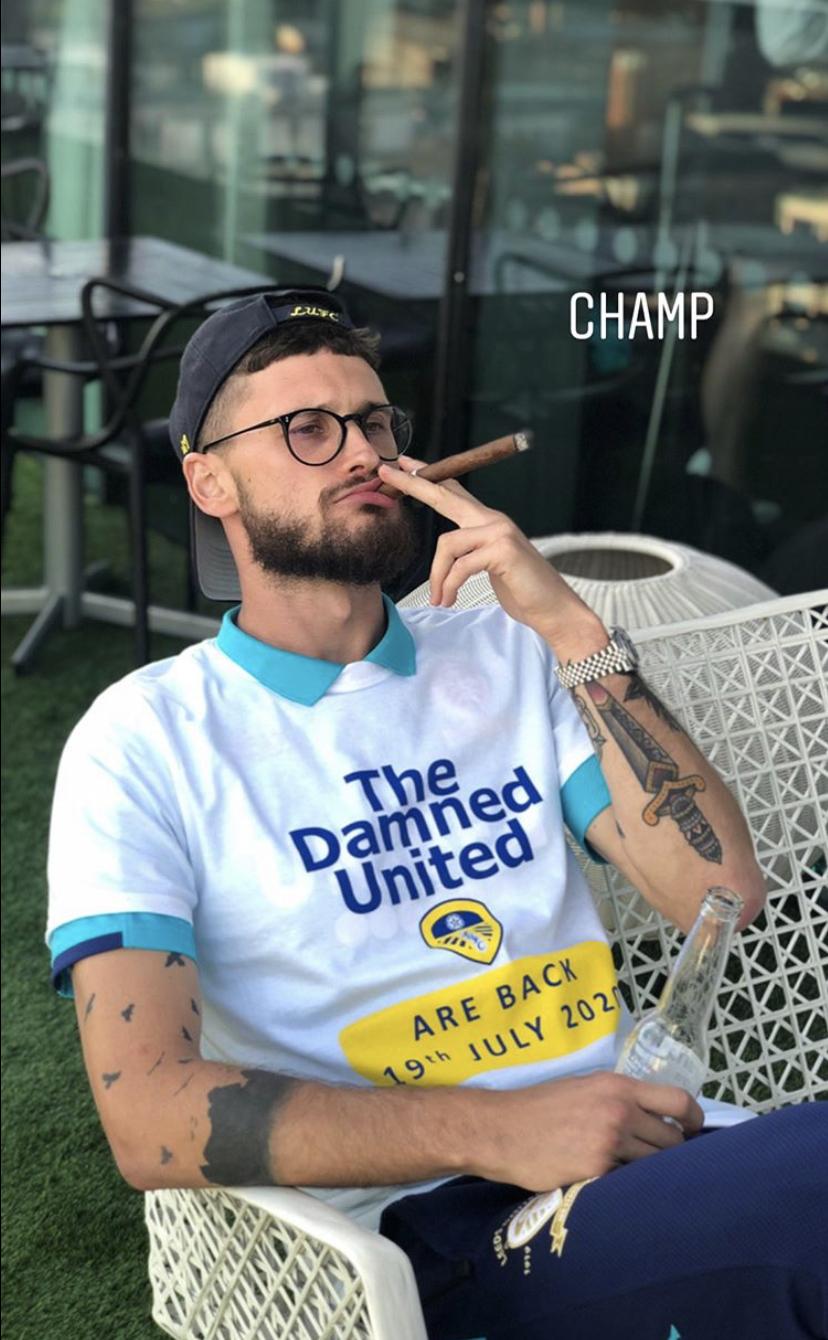 Klich returned to the starting eleven for the visit of Lee Bowyer’s Addicks after missing the guard of honour and subsequent football match at Wayne Rooney’s Derby County.

The former FC Twente man had started 92 consecutive games under Bielsa. It is testament to his fitness and performance levels that the only thing that kept him out of the side was possibly a hangover. But how did a player seemingly an outcast at Elland Road and on his way out when El Loco took over go on to become Bielsa’s ever-present star?

The son of a former footballer, Klich’s father Wojciech currently coaches at Poland’s oldest club Cracovia; the side who gave the midfielder his debut back in 2008. From there, Klich headed to German outfit Wolfsburg in a €1.5 million deal, before successful spells at PEC Zwolle, Kaiserslautern and FC Twente saw Leeds come calling for his signature.

His well-documented and unfortunate slip away at Cardiff is well believed to have been what caused him to fall right to the bottom of the pecking order under then boss Thomas Christiansen. As the midfielder left West Yorkshire to join Eredivisie side FC Utrecht on loan, Klich vowed he’d be back to prove himself at Leeds.

Quickly becoming an integral part of Jean-Paul de Jong’s team, the midfielder helped the Dutch club finish fifth and qualify for the Europa League playoffs. This form, coupled with his successes at the beginning of Bielsa’s tenure at United, saw Poland boss Jerzy Brzęczek end Klich’s four-year exile from the national team and rewarded him with a call up to face Italy and the Republic of Ireland. 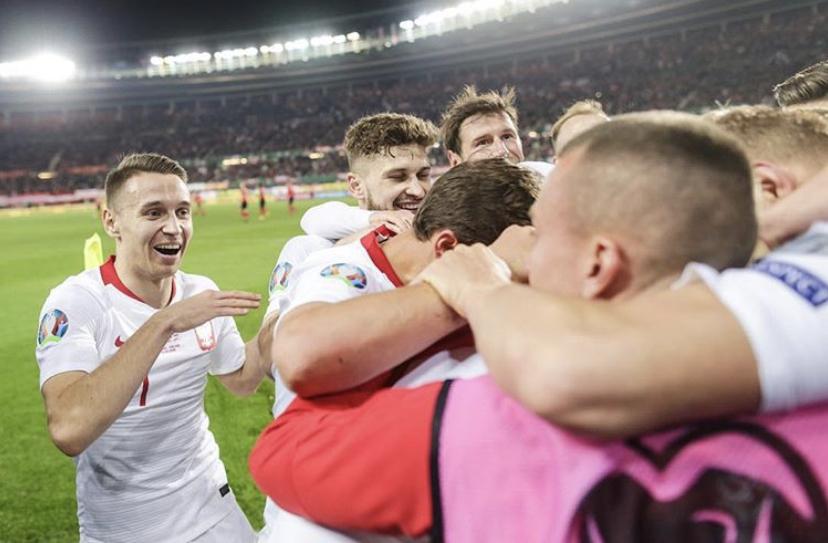 This season, despite not being as prolific in front of goal as last term, he still managed to net six times in the league, with another superb effort coming in the Carabao Cup tie at Salford City.

The energetic midfielder’s sublime curling effort against Middlesbrough was enough, in his eyes anyway, to warrant a second successive goal of the year award after his 30-yard strike away at Sheffield Wednesday in 2018.

With the dominating performances put in by the likes of Kalvin Phillips, Ben White and Liam Cooper, one could be forgiven in not necessarily expecting the creative Klich to score highly amongst the defensive stats. Yet with 254 ball recoveries, 178 duels won, and the third-most tackles won per game for Leeds this season, Klich epitomises the true definition of ‘Bielsa-ball’.

Opponents are charged down the minute the ball is played into them, no matter whether it’s the daunting figure of Phillips or the more attack-minded Klich, who then immediately turns defence into attack in the blink of an eye. But these on-field numbers aren’t the only reason why the Polish star has become a cult-hero amongst Leeds fans. 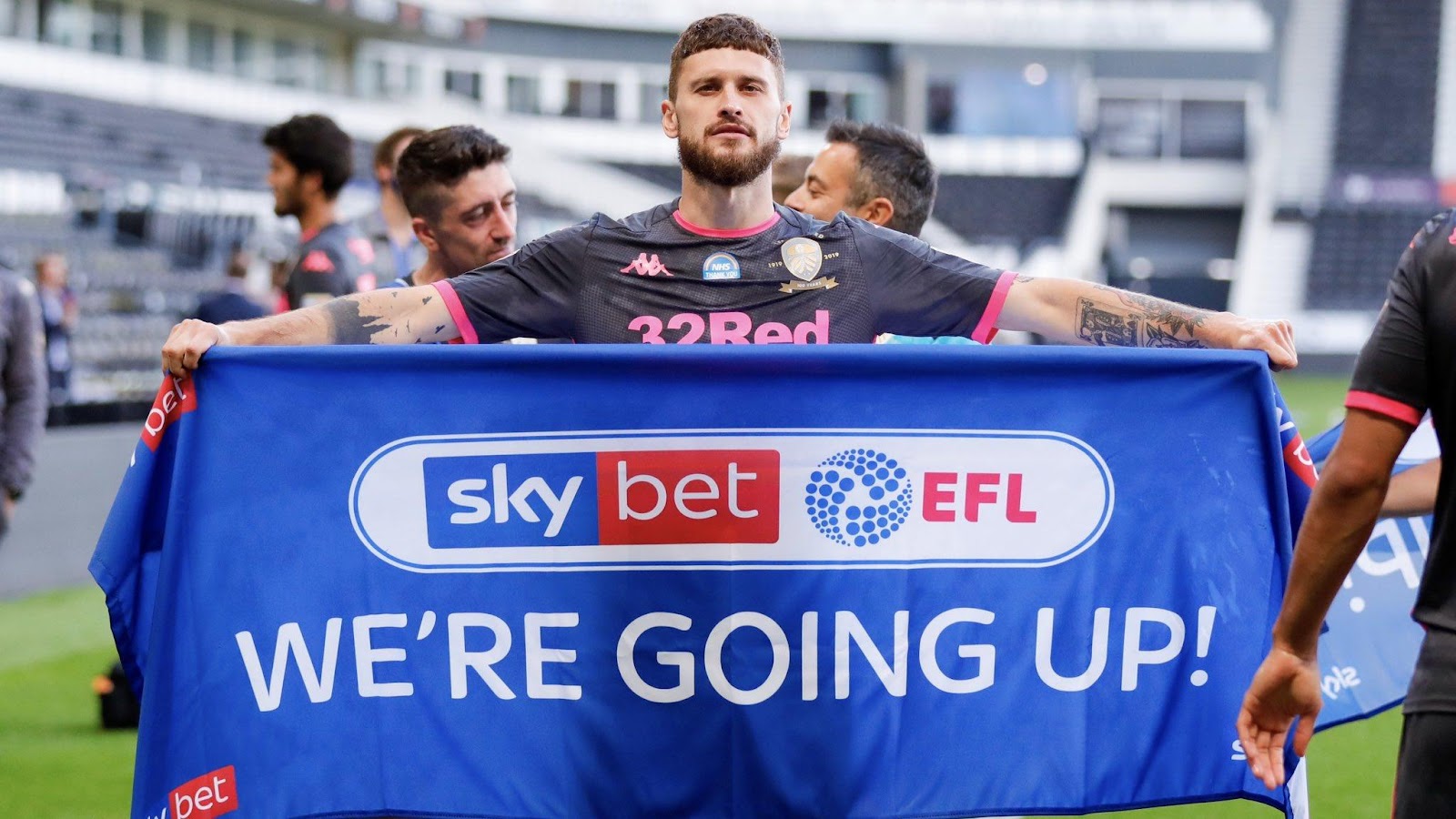 The term ‘shithousery’ has been thrown around the footballing world far too often in recent times, yet for Klich, winding up opponents seems to be nearly as important as doing his duties on the pitch. As Brentford faced Swansea in their playoff second leg, Klich uploaded an Instagram story of the game captioned, ‘Watching some football on holidays’.

This came just over a week after retweeting Brentford’s acknowledgement that Clarke Oduor’s last minute goal had ended the Bees’ automatic promotion hopes, in turn a few days after celebrating Leeds’ successes by mimicking Thomas Frank’s efforts at trying to get under United’s skin; tweeting ‘Over to you…’.

After starting a mammoth 92 consecutive games for the Whites, it was great to see Klich in the stands clapping and chanting as United celebrated winning the league away at Derby County.

Klich just going nuts in the stands fuck me man this shit is too funny #LUFC pic.twitter.com/YvkZVbOMBT

He had been on the bench, but as the players danced around on the pitch after the game, following 90 minutes of dancing round a fatigued Rams side during the game, he made his way into the stands to cheer on his team.

Then there was perhaps his best-known moment: playing on against Aston Villa and slotting home past Jed Steer as Jonathan Kodjia lay on the floor.

As Sheffield United were robbed of victory at Villa Park thanks to a goal line technology blunder, Klich immediately reminded Dean Smith and his Aston Villa side how the Whites were awarded with a FIFA Fair Play accolade after they let Albert Adomah score unopposed in front of the Elland Road south stand last season.

In a midfield three in which Kalvin Phillips provides the muscle and Pablo Hernandez is looked at for the artistry, Klich’s contribution often goes under the radar. Yet without the dynamic energy and forward-thinking nature of the Pole, Bielsa’s more spoken about midfield pair would be in for much of a battle in the middle of the park.

As Bielsa and Leeds inevitably look to strengthen over the summer ahead of their much anticipated return to the Premier League, Klich, once he has finally put the promotion champagne down, will be sure to kick on and further cement his reputation as one of the best box-to-box midfielders Elland Road has seen in recent years.

746 successful final third passes (MOST in the Championship)

76.1% pass accuracy in the opposition half

Started 92 consecutive league and play-off matches until the victory at Derby. 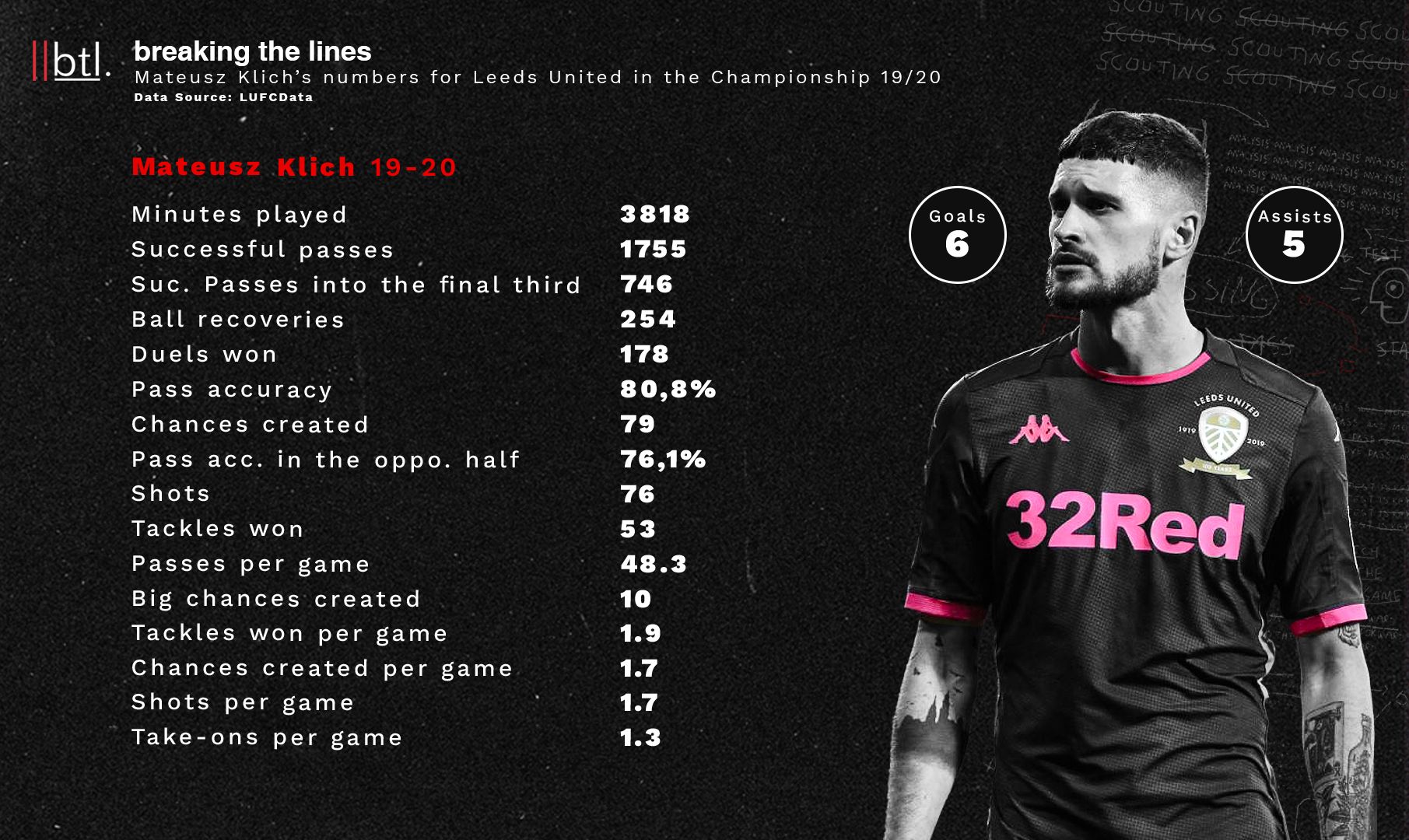 All stats provided by @LUFCData