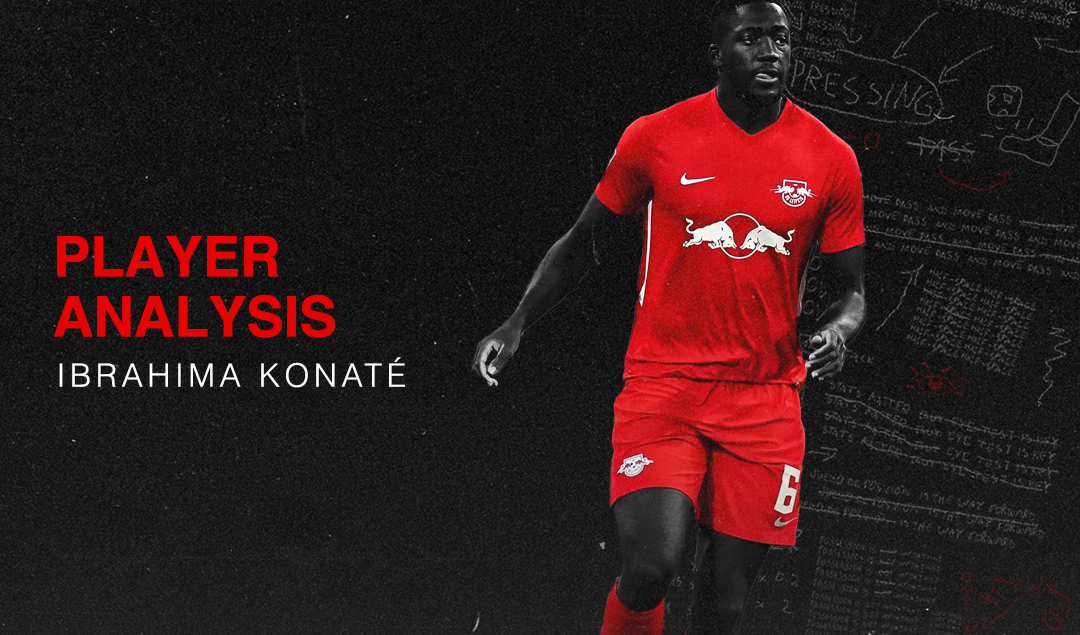 Ibrahima Konaté speaks well. As a 19-year-old he discussed his blind trust in Dayot Upamecano and the fatherly position former head-coach Ralf Rangnick developed during his first year at RB Leipzig. Now 21, the landscape has shifted. Julian Naglesmann is in charge and rates Konaté highly, but an injury-riddled past couple of seasons has given the central-defender little chance to make an impact.

Konaté grew up idolising Sergio Ramos, describing him as a ‘warrior’ and ‘leader’. It’s clear to see when watching him that he takes this into his own game. Confident and with an unassuming technical quality for someone so large, Konaté’s ability to break the lines in possession or with a vertical pass suits Leipzig and the Bundesliga’s quick, transitional play.

Strength-wise, Konaté is unsurpassable. He’s shrewd too, underpinning his pleasingly aggressive yet considered approach to defending. There’s nothing more infuriating than a central-defender flying through the back of a forward every chance they get. Konaté is nothing near it. When getting close to the opposition attacker, he remains composed, using his impossibly long legs to poke the ball free.

His recovery speed is remarkable too. Despite losing to PSG in the Champions League in November, Konaté denied that dangerous frontline on multiple occasions, putting in a strong performance. He seems to be a good fit under the newer Leipzig, capable of playing in both a back three and four alongside his good friend Dayot Upamecano.

Playing in a Perfected System

Naglesmann’s build-up phase is a simple one and can be categorised by the pushing of the full-backs/wing-backs high up the pitch. In turn, this forces the opposition into a wide-block. The newly-found width inevitably creates space centrally for Konaté, among others, to exploit.

It also allows the double-pivot of Marcel Sabitzer and Kevin Kampl to collect the ball from deep, or give the more than adequate central-defenders the opportunity to drive forward before releasing a pass that brings Leipzig higher into the opponents half. The positional intelligence of these two midfielders can not be understated. It’s rare that both Sabitzer and Kampl will come deep; instead one will remain slightly higher to give ease of access in the second phase of the build-up play.

Another key concept is verticality and this is why Konaté is important for Leipzig. His willingness to play a vertical pass into the midfielders, rather than resorting to shifting the ball laterally, fits Naglesmann’s system perfectly. Progressing the ball quickly is a core approach at Leipzig and has been even before Naglesmann arrived.

Also, not having the pressure of being the one to find that forward pass always helps too. Whilst Konaté’s confidence on the ball certainly shines through when watching Leipzig, his defensive partner’s abilities to play with the ball at their feet speaks volumes of the coaching style implemented in Eastern Germany. Both Willi Orban (6th) and Marcel Halstenberg (7th) rank in the top ten for forward passes completed by central defenders per 90 in the Bundesliga. Tidy.

Orban in particular often goes unnoticed amongst Leipzig’s star-studded defenders, but the Hungarian’s continuous rise has been integral to Naglesmann’s side. For a talent like Konaté to play alongside someone like Orban, who’s in the prime of their career, will be a momentous boost. It’s under-appreciated how far confidence in your teammates will improve you. Naglesmann’s carefully perfected system has so far proven highly effective for Leipzig. Given the chance, there is little doubt that Konaté can thrive in this setup.

RB Leipzig haven’t lost a Bundesliga game in which Konaté has played in this season. The problem? He’s only played six.

Physically, Konaté is a freak. At 6ft 4in tall, he has been clocked reaching speeds of 34.4km/h. In comparison, Kylian Mbappé’s electric sprint against Marseille on Sunday hit 36km/h. Whilst it’s fair to say that he’s no slouch, this dynamic explosiveness was always going to cause someone of Konaté stature a problem.

Kylian Mbappe put on the afterburners 💨

The average weight of a defender in the 2018 World Cup was 78kg. Konaté was last recorded weighing 95kg. Once you combine this raw pace with his size, it’s hard to imagine him staying fully fit once the first bout of injuries arrived. Luckily Leipzig have had more than adequate cover, with compatriots Nordi Mukiele and Upamecano, as well as Orban, providing consistently outstanding performances.

In stylistic terms, Konaté tends to tackles opponents in full stride and frequently overextends his knee and hip adductors (hip flexor) during these challenges. Whilst extremely effective in denying the opposition space and regularly resulting in fine last-ditch tackles, Konaté’s high impact gait means that he is at a much greater risk of knee and hip damage as well as ankle eversion sprains. Ankle eversion sprains are essentially the rolling of the ankle outward and upwards. The greater the force on the ankle when this happens, the greater the damage done.

And this all translates to real injuries. Konaté has struggled with a hip flexor injury since the end of last season and has just come back from an ankle eversion sprain that caused him to miss nine games. Overall, since the opening day of the 2019/20 season (a DFB Pokal clash v VFL Osnabruck), Konaté has been injured for 393 of 552 days, missing a staggering total of 45 games for Leipzig through injury.

When fit, he’s stronger and quicker than almost any other player in world football, but has it got to the point where Konaté’s physicality and defensive style comes at a detriment to his health? He’s still just 21-years-old and clearly has a very promising future with Leipzig and the French national team.

Now, Liverpool are reportedly interested in Ibrahima Konaté, and whilst the Frenchman undoubtedly has the ability to play at any level, Jürgen Klopp would have to be careful managing him. The Premier League already has the most injuries of any of the top five leagues and a winter period that sees an average of 2.3 injuries per game. Furthermore, the English top-flight averages a greater sprint output (frequency and length) per game than other top European leagues.