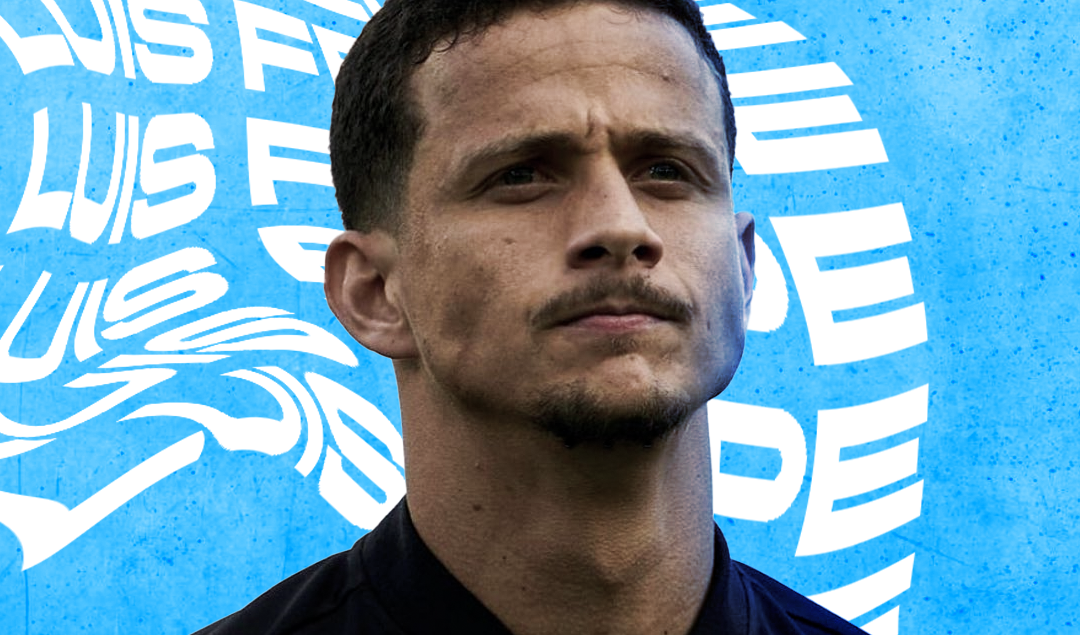 Since the suspension of football across the globe, due to COVID-19, several reports have been released which have confirmed Barcelona’s interest in Lazio’s Luiz Felipe.

Most recently, the Blaugrana are said to have scouted the 23-year-old during the Serie A match against Parma (Matchday 23) and were also set to watch the match against Genoa (Matchday 24); however, the defender picked up a suspension due to yellow card accumulation, therefore missing the match.

Impressed by the youngsters playing style, it is said that the Spanish side are looking towards signing the player in this upcoming summer transfer window.

Who is Luiz Felipe?

Born in Brazil with Italian heritage, the central defender initiated his playing career in his country of birth with Brazilian fourth division side Ituano Futebol Clube (SP).

Catching the eye of Biancocelesti Sporting Director Igli Tare, he was signed by the Serie A club and brought to Italy at the age of 19, for just €750 thousand in the summer of 2016.

Directly sent on loan to Serie B side Salernitana for the 2016/17 campaign, following this, he was kept in Rome where he was given the chance to play with the Lazio first team.

He has since taken that chance to transform himself into a consistent and confident starter in the back three of Simone Inzaghi’s starting 3-5-2 formation; this season, the player has made 23 appearances in all competitions – 19 have come from the top flight of Italian football, where he has made 18 starts.

Over the past three seasons, the defender’s rise has not gone unnoticed. He has finally reached his maturity and, as was likely to predict, interest is finally arriving for him.

However, Claudio Lotito and Igli Tare want to keep him in Rome long-term as they realize how important he is for the future of the club. As a result, they have been working alongside Stefano Castagna – the Luiz Felipe’s agent – on extending his contract since this past summer; but they have not been able to come to an agreement as of yet.

Luiz Felipe’s current contract expires in the summer of 2022, and despite being considered one of the best prospects in the Serie A, he currently receives just €500 thousand plus bonuses per year. At the moment, there is still distance between the club’s offer and the player’s wants, but the suspension of the campaign could favor the evolution of the situation.

The footballer has expressed his desire to stay, stating “I always have to thank God for having had the opportunity to play for Lazio…Only my mother knows how happy I am to be in the Biancoceleste colors.” However, he wants his request to be satisfied, and Lazio will have to make an economic commitment to keep hold of him.

Given the hefty investments that the club will likely make this summer on other departments, Barcelona are looking for a central defender who is young and matured, has a low to medium salary, an EU passport, and is cost effective.

This is because Gerard Piqué – who just turned 33 – and Samuel Umtiti – who has constantly struggled with knee problems – have not been at their best; the La Liga giants need to invest in a new pillar for their defensive department and Luiz Felipe is a profile that fits their needs. The value of the Brazilian is said to be around €40 million.

Luiz Felipe also earns just €500 thousand euros plus bonuses per year, which is a figure much lower than any other potential prospects Barcelona are considering. Furthermore, the 22-year-old has an Italian passport, meaning that he would not occupy a position being saved for an investment in a non-EU player.

This was completed to see who Luiz Felipe plays similarly to on the current Barcelona team, to analyze where he has improved over the past three years playing in a top five league, and to discover in which area he still needs to enhance his abilities. 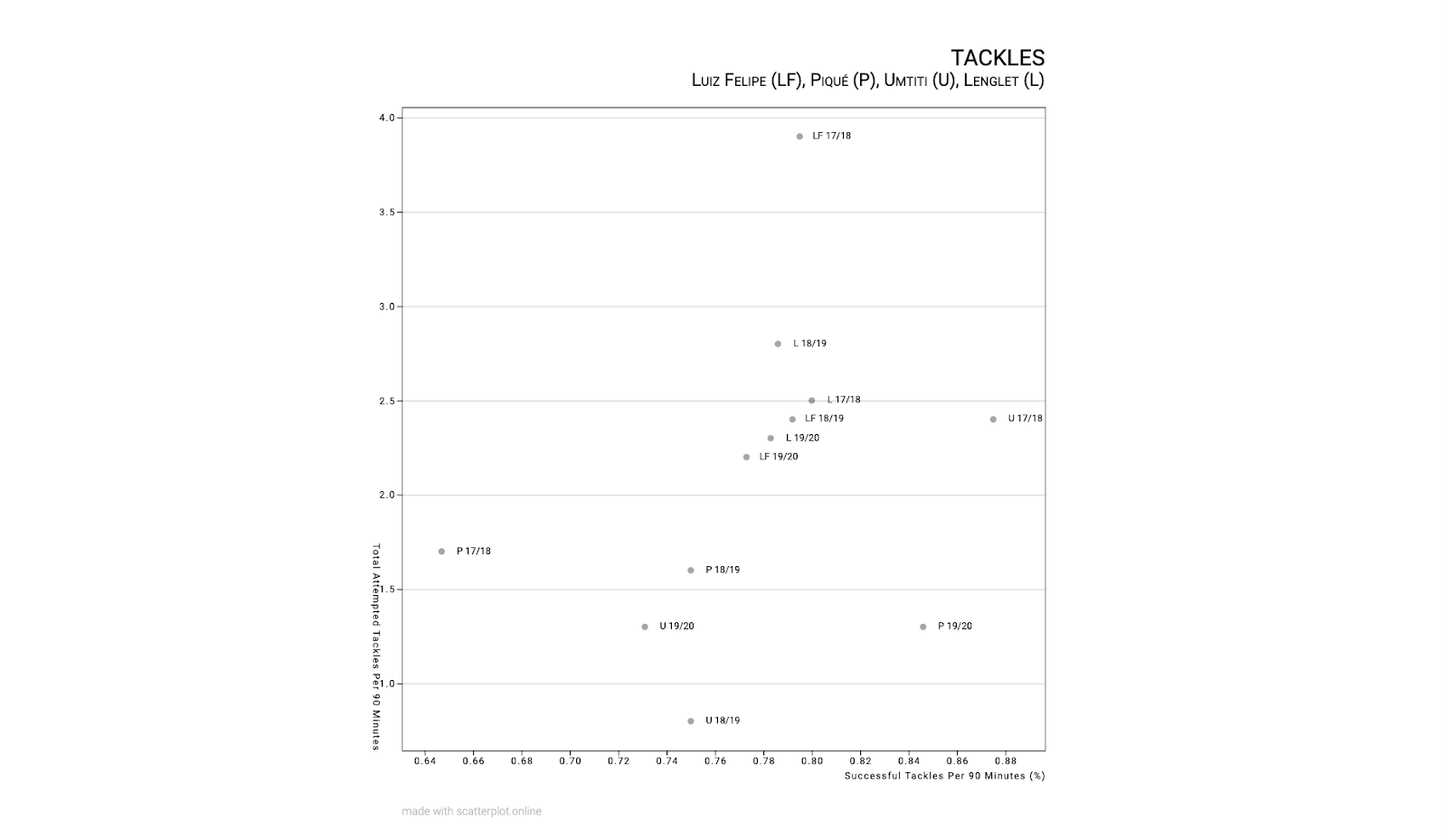 This data proves that the defender is learning to contain himself more often instead of stepping in for a challenge recklessly; however, he is not as successful when he does attempt to win the ball. Luiz Felipe’s statistics draw parallels to Lenglet in regard to tackling. 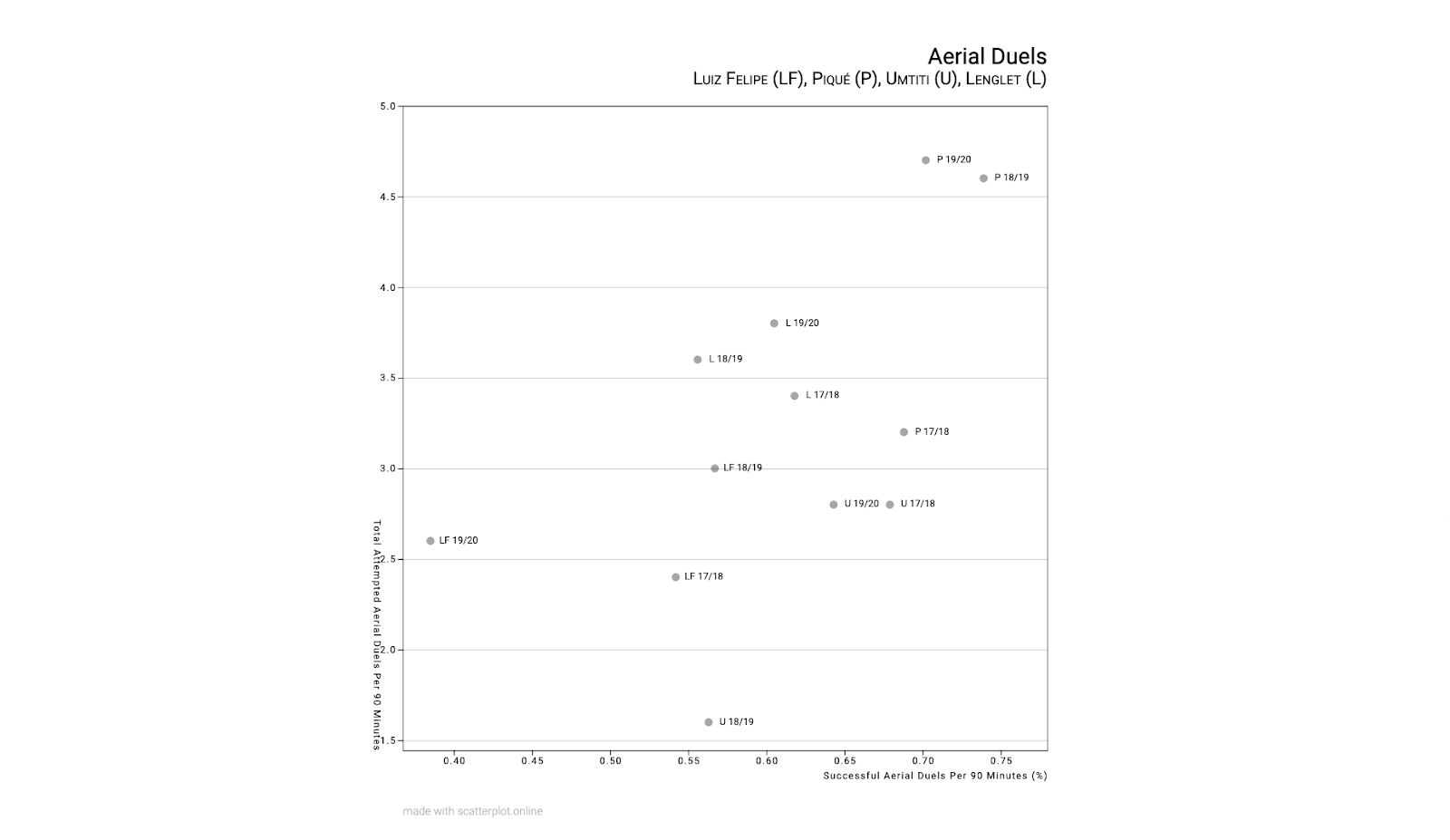 Luiz Felipe’s statistics do not draw any parallel with any of the aforementioned Barcelona players in regard to aerial duels when looking at the image above. However, when taking an average of each of the three years, he draws parallels to Lenglet. 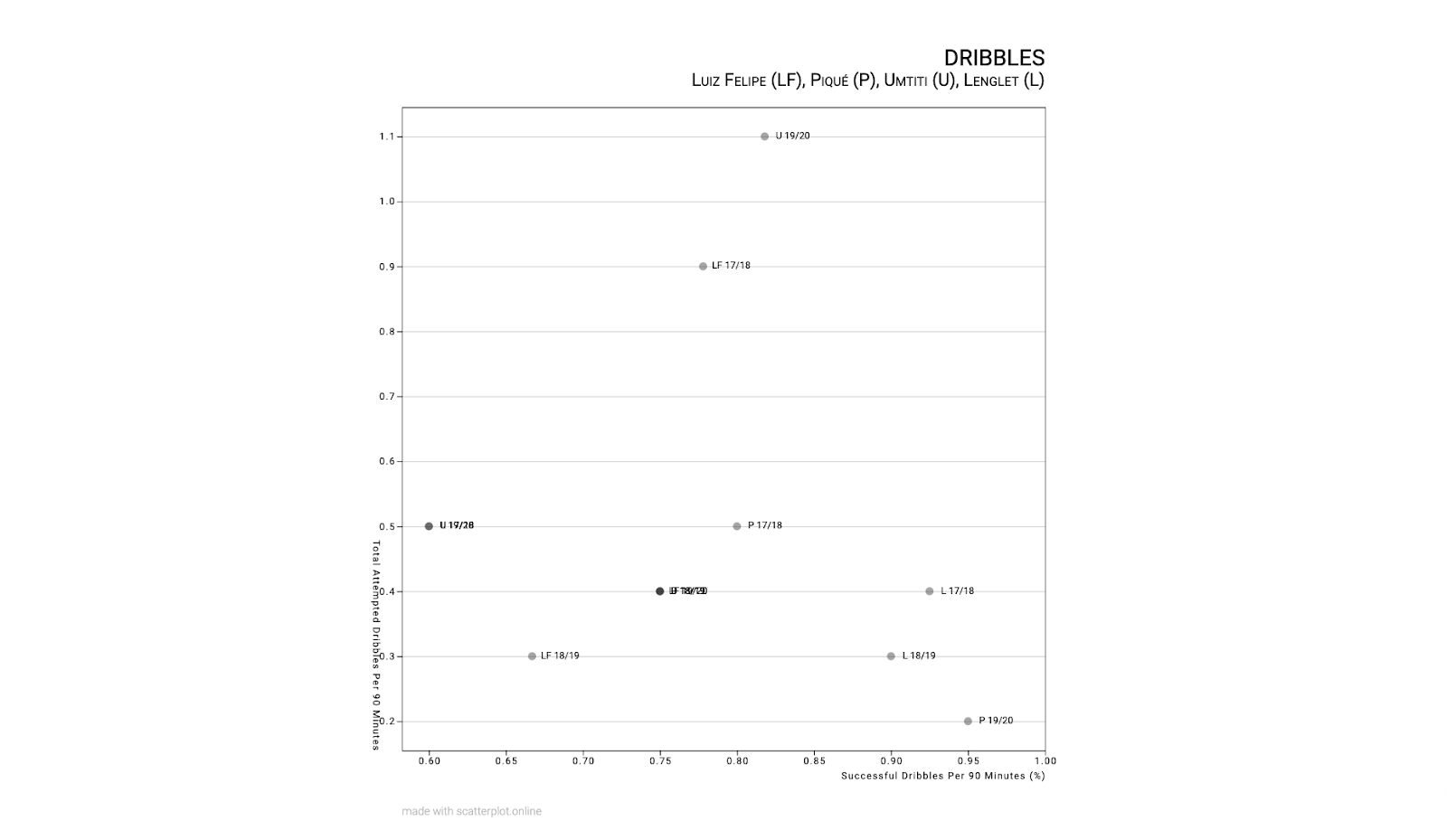 Luiz Felipe’s statistics do not draw any parallel with any of the aforementioned Barcelona players in regard to dribbling when looking at the image above. However, when taking an average of each of the three years, he draws parallels to Umtiti.

This data demonstrated that even though his total number of attempted passes are generally decreasing, his accuracy has improved. Luiz Felipe’s statistics do not draw any parallel with any of the aforementioned Barcelona players in regard to short passes when looking at the image above. Neither when taking an average of each of the three years. 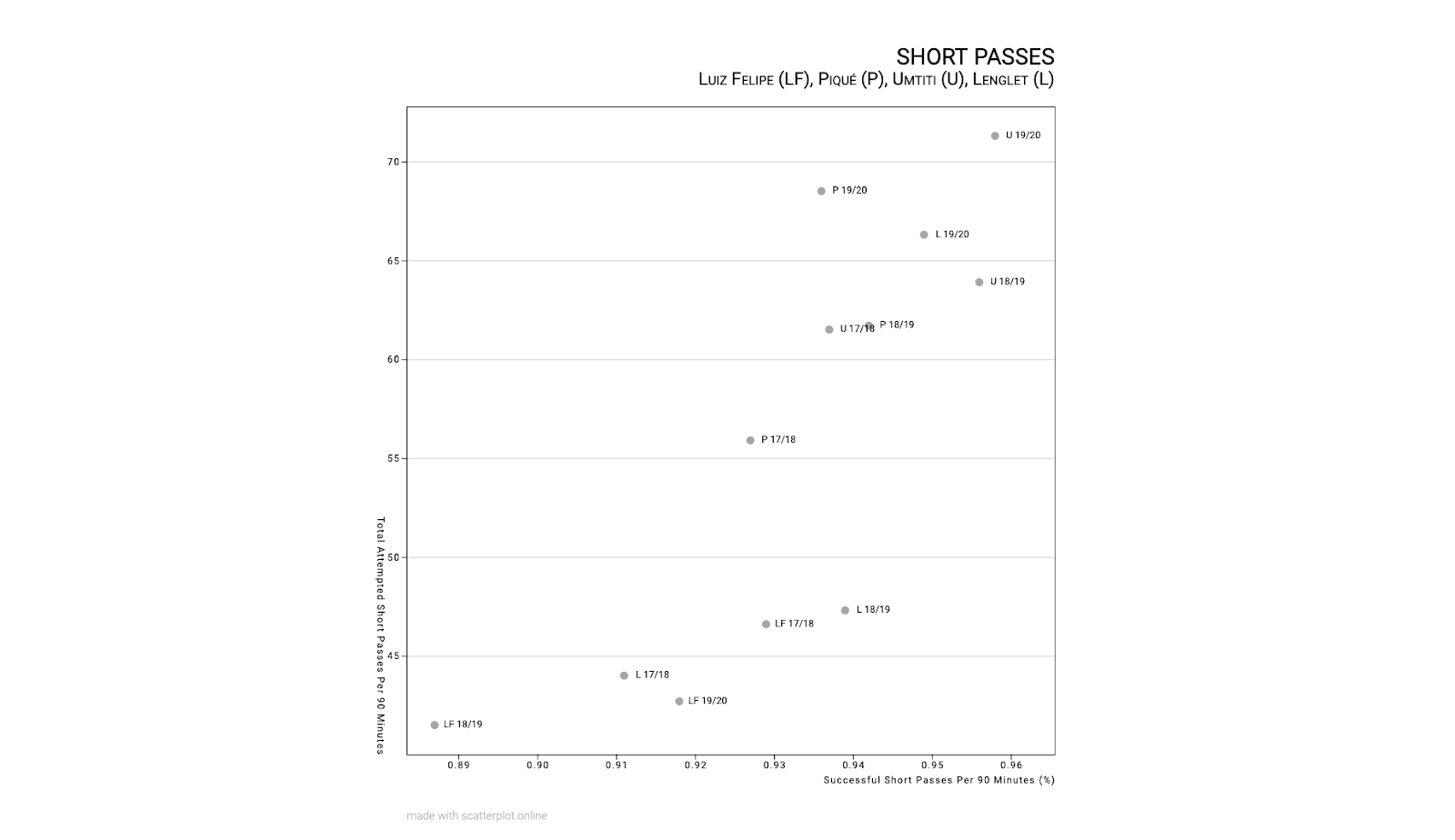 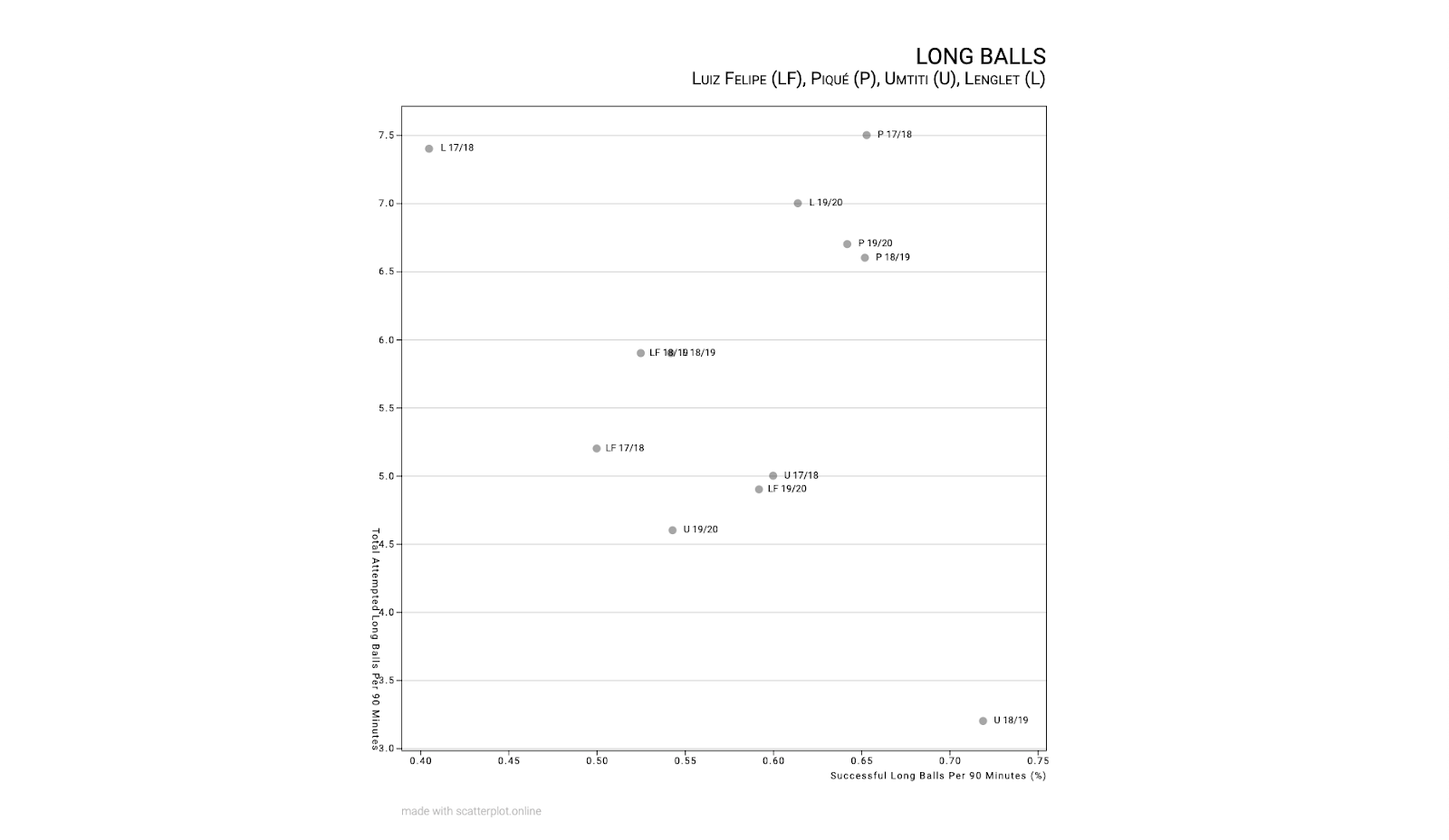 Luiz Felipe’s statistics do not draw any parallel with any of the aforementioned Barcelona players in regard to long balls when looking at the image above. However, when taking an average of each of the three years, he draws parallels to Lenglet.