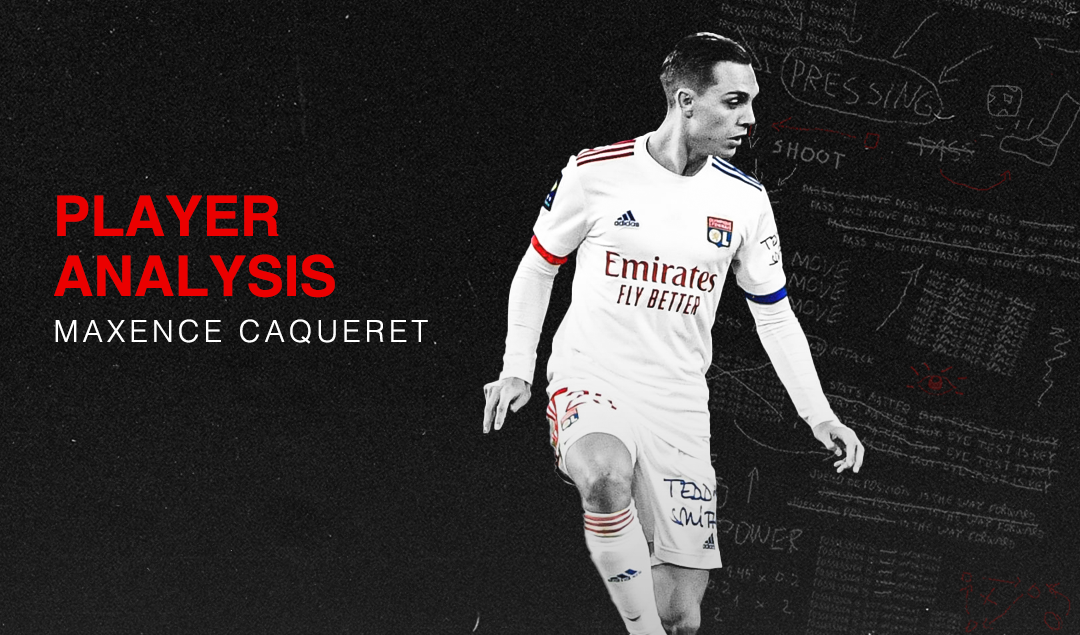 Ligue 1 this season has been box office entertainment, which is ironic considering the collapsed TV deals with Mediapro. For the first time in a while, we are witnessing a proper title race with Lille leading the front with 3 games to go. PSG are only a point behind whilst AS Monaco are just 5 points behind with a game in hand.

It looks like the title race will go down to the wires with Christophe Galtier hoping to lead Lille to their first Ligue 1 title since 2010. Right behind them is Rudi Garcia’s Lyon, who unfortunately dropped out of the title reckoning in recent weeks. That said, Les Gones can hold their head up high as they look certain to be back in Europe next season after a disappointing domestic season in the last, finishing 7th.

At the heart of it is another one of their academy graduates, thriving in midfield under Rudi Garcia. Having joined the academy since 11, Maxence Caqueret has finally had his breakthrough season with Lyon 10 years later. The Venissieux born midfielder has been a constant figure in the youth ranks at both club and international level, captaining the sides on numerous occasions as well.

Playing for the club means everything for Caqueret and he shows it in every game he plays, tirelessly covering every blade of grass on the pitch, helping the team in whatever situation the best he can. When he played Juventus in the Champions League last season, the midfielder covered 14km in 90 minutes, drawing praises from coaches and setting up an example for his teammates despite being the youngest in the locker room.

Jean-Michael Aulas, president of Lyon even spoke admirably of the youngster upon signing his first professional contract, calling him a ‘real Gone’ and ‘the future of this club’.  Fair to say Caqueret is handling the compliment very well, repaying the faith shown in him with dominating performances in midfield for Lyon.

The dashboard below shows why Caqueret is highly regarded in Lyon as the next big thing and his importance to the club when compared to other midfielders in Ligue 1. This analysis will cover the Frenchman’s performance with the club this season. All figures below are based on performance per 90 minutes played, according to StatsBomb via FBref. 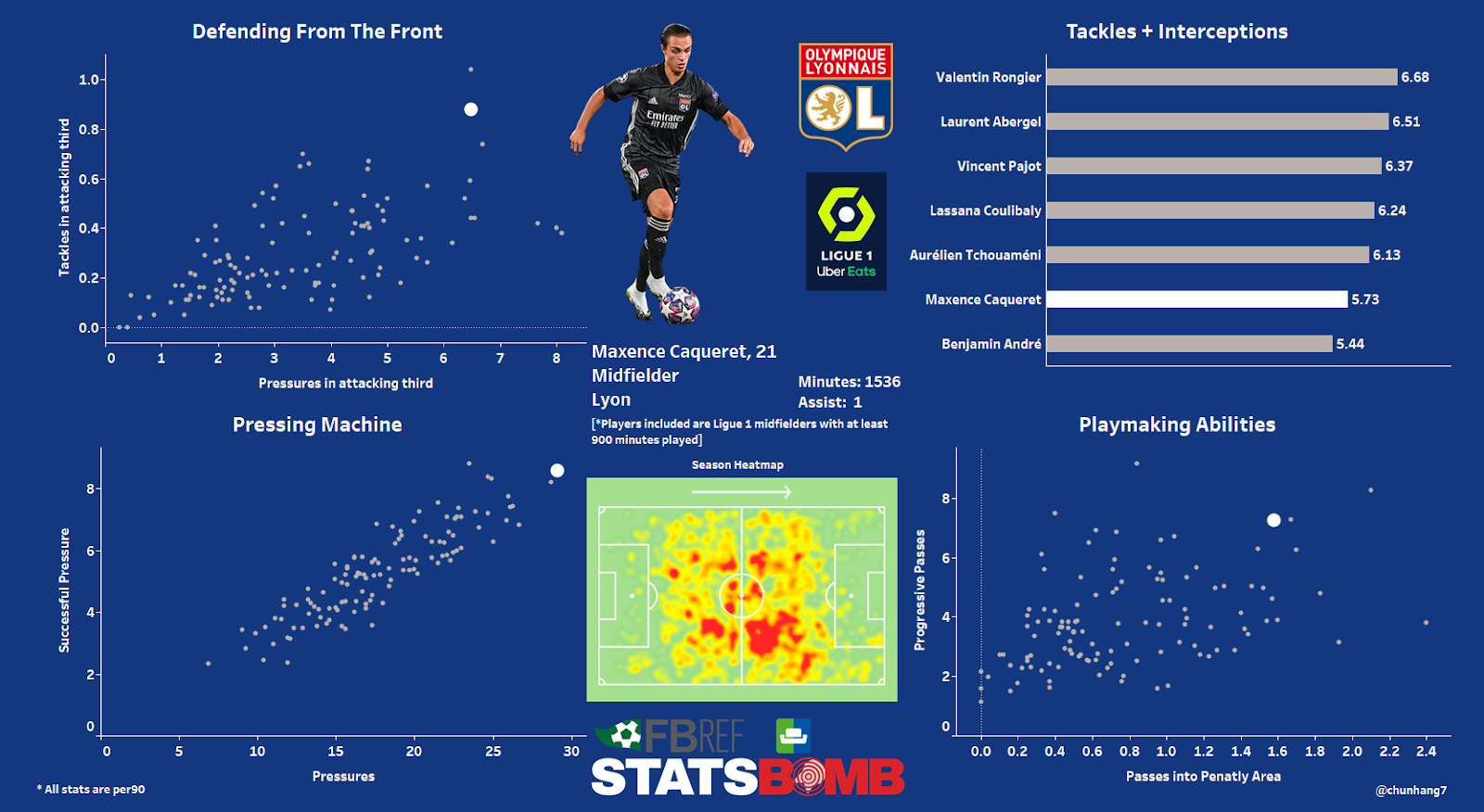 Maxence Caqueret may not be the biggest guy on the pitch, weighing at 63 kg with a height of 5’8ft, but he makes up for it with his immense work ethic and determination. When watching him play, he is seemingly everywhere on the pitch, running around tirelessly doing a bit of everything as an all-action box-to-box midfielder. One moment you might see him spearheading attacks and the next u might see him sprinting back to cover for his full-backs.

His only assist against Lille this season perfectly personifies Caqueret’s playstyle and character. As Lyon progresses the ball forward, Caqueret makes his way to the box and finds space in between the lines to be picked out. The pass was slightly overhit and the defender manages to get his body in between the man and ball. But this is where Caqueret’s determination and desire kicks in as he never gave it up and threw his body in to get the pass towards Islam Slimani for the opener.

The Frenchman is amongst the league’s best pressers of the ball, constantly hassling and disrupting opposition momentum when out of possession.  This season, he has accumulated 29.10 presses per90, with 8.6 of those being successful. Only Andrés Cubas has accumulated more successful pressures than Caqueret with 8.82 per90. This makes him the most frequent presser in the league as well as one of the most efficient ones, ensuring his presence is felt during games no matter the opposition.

Caqueret has never been shy in engaging the press and looks to make defenders feel uncomfortable with his presence from kick-off. In the game against Bordeaux, he was already harassing defenders within the first 20 seconds, which led to a throw-in earned in Lyon’s favor. Even nearing the end of games, he will never stop running and pressing opponents. In the game against Saint-Ètienne, even at 4 nil up, Caqueret’s desire and determination never lets him rest as he pressed the keeper at the 80th minute hoping to pounce on errors.

The midfielder is also amongst Lyon’s highest pressers, often being their first defenders, winning balls aggressively in the final third of the pitch, hoping to produce a turnover in possession at a dangerous area for Lyon. This season, Caqueret has registered the second-highest tackles in the attacking third amongst midfielders, with 0.88 per90. Alongside his 6.49 pressures in the final third, this makes him a very aggressive defender from the front for Lyon, constantly giving defenders and goalkeepers headaches.

In the game against FC Metz, the opposition was looking to progress up the pitch when Caqueret pressed the player intensely from behind and eventually put a tackle in to win the ball, showing his aggressive nature as a player and determination to win the ball back against a much physically imposing opponent.

Maxence Caqueret isn’t just your typical hard-running midfielder who excels off the ball, he is also a brilliant technician on the ball for Lyon. Being 5’8″, the short midfielder utilizes his low center of gravity to expertly to glide past opponents with ease. Having a street football background has also honed his ball control and dribbling. Often times we see Caqueret being pinned into tight situations but manages to manipulate the ball expertly to either dribble out of the situation or even find the smallest of gaps to his teammates.

His ability to retain the ball despite being pressured makes him press resistant and he wins crucial fouls for the team too. In one instance against Saint-Ètienne, Caqueret is surrounded by 2 players upon receiving the ball from a throw-in. He doesn’t panic and cleverly shield the ball before moving it and he got caught in the process, the freekick earned was rewarded with a goal. This move showcases his ball control in tight situations as well as his creativity being to innovate something out of nothing.

Speaking of creativity, Caqueret is perhaps very underrated in the passing department for he exudes calm and precision whenever supplying for his teammates. This season he has accumulated 7.25 progressive passes per90 and 1.58 passes into the penalty area. To put it in context, he has beaten the likes of Hatem Ben Arfa, Rafinha, Houssem Aouar and Renato Sanches in this metric, players who we would consider as Ligue 1’s more creative players.  This shows that the player has a keen eye for a dangerous pass and is reliable in doing so.

The game against PSG demonstrates his quality in picking out passes from deep. Upon receiving the ball on the right half-space, Caqueret immediately plays a perfectly weighted, defence-splitting pass towards his winger towards the penalty area. Doing so requires ridiculous technique but doing it on his first touch highlights the quality he possesses.

As I alluded to previously, Maxence Caqueret is not afraid to put a foot in where it hurts as long as it meant regaining possession back for his team. When compared against other midfielders in the league, the 21-year-old is amongst the best ball winners in the league, with 5.73 tackles + Interceptions per90.

It’s a testament to his football IQ, the midfielder understands the responsibilities he holds as the team’s pressing engine, often having the license to press aggressively compared to his teammates. But he also knows when he should sit into the settled shape, opting to close down passing lanes instead of engaging the press mindlessly.

A moment against Girondins de Bordeaux highlights his ability to read the passage of play and intercept the ball. When Bordeaux attempted to play it out from the back, Caqueret recognizes the target and immediately runs to break up the play, winning the ball in an advanced position. The same game saw him throwing slide tackles in the middle of the pitch as Lyon regain possession. Further showing his desire to win the ball and defensive prowess.

Going up Against the Best

So how does Caqueret compare amongst the best midfielders in the world? I have decided to compare both Caqueret with Chelsea’s N’Golo Kanté, to see how the youngster fare against a Premier League and World Cup winner. I picked Kanté as I believe they adopt a similar playstyle on the pitch. We may even see the 21-year-old take Kanté’s place in the national setup soon.

The dashboard below will highlight the playmaking attributes in Key Passes, Progressive Passes and Progressive Carries, as well as defensive attributes such as Successful Pressures, Tackles + Interceptions and Recoveries. 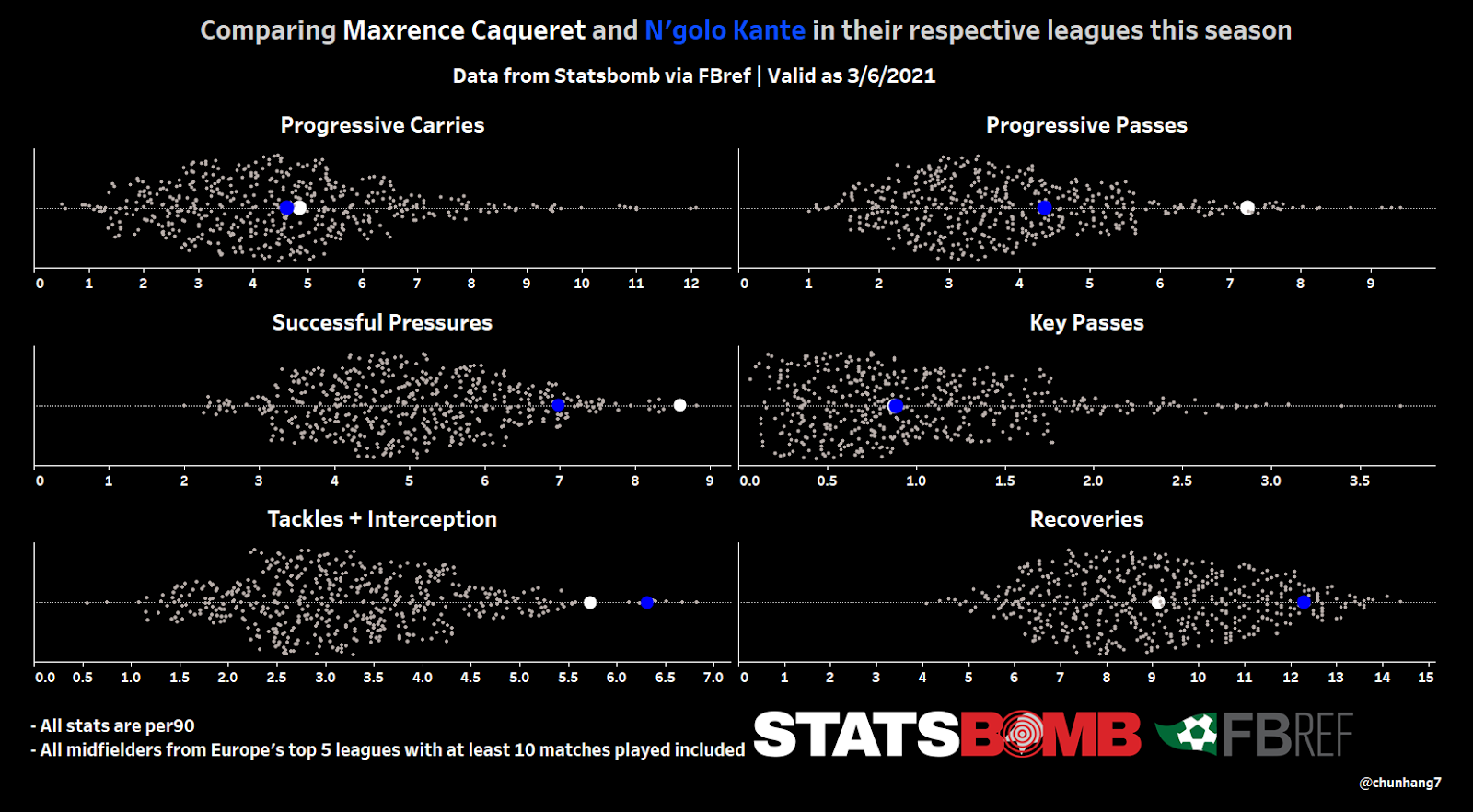 As we can see, Caqueret is a much better progressor of the ball compared to Kanté this season with the former beating the world champion in the progressive carries and progressive passes metrics. Perhaps this is indicative of the new role Kanté has adopted under Tuchel where he is now playing a more defensively rigid role, shielding the defence more often than he did under both Maurizio Sarri and Frank Lampard, where he was more of a box-to-box midfielder.

When we compare successful pressure per90s, we would assume both would rank highly due to the stamina, work-rate and defensive prowess of both players. However, it is the former Lyon academy graduate who dominates this metric and is ranked amongst Europe’s best as well. This goes to prove that he is one of the best pressers in Europe, not only using his speed and stamina but also knowing the perfect moment to engage in a press.

In terms of key passes, both players are not their team’s sole creator and hence the creative burden of creating from deep isn’t emphasized in their roles. Both have similar numbers in this aspect with Kante slightly edging the metric with 0.89 per90, to Caqueret’s 0.88.

When it comes to the defensive side of the game, however, it is clear to see Kante as the more dominant player with more tackles + interception and recoveries recorded this season, further proving that he is amongst the best in the world being the ball winner in the team. That said, Caqueret’s numbers are respectable and not far apart from Kante’s numbers in Tackles + Interceptions too. Caqueret certainly holds his own against one of the world’s best midfielders in the world.

Maxence Caqueret has proven himself to be one of Rudi Garcia’s more reliable assets this season with the player capable of doing just about everything. From pulling the strings in midfield, to harassing goalkeepers in the dying embers of the game or effortlessly gliding past challenges, he is Lyon’s Swiss Army Knife, constantly providing them solutions to their many problems on the pitch. Caqueret’s love for the club gives him the extra edge and desire to run through brick walls for the club, something so precious to see but rare in modern-day football, corrupted with money and greed.

As of now, the best way forward for Caqueret is to remain at his boyhood club. With the shortage of leadership in the changing room, the former Lyon B captain may look to take up the mantle in the next few years. Just like Jean-Michael Aulas’s premonition, Caqueret is the future of the club.