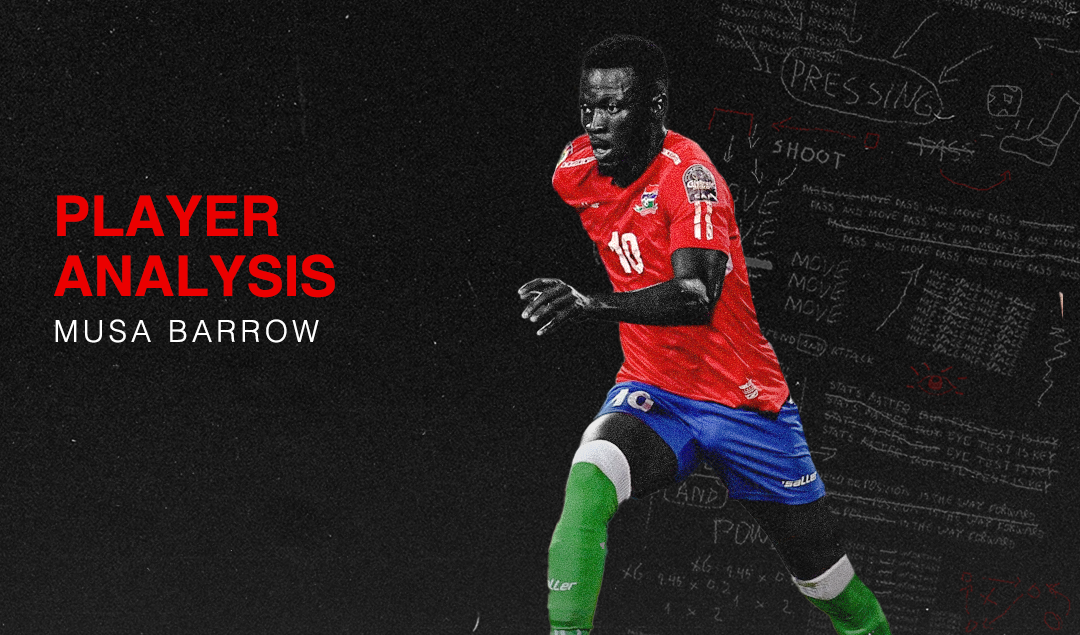 Musa Barrow was a promising youngster that came through the famous Atalanta youth academy after he was lured from his native Gambia to come and play football in Italy as a teenager.

After scoring 23 goals in just 18 Campionato Primavera matches in 2017/18, he was integrated into the senior squad by Coach Gian Piero Gasperini.

However, playing opportunities were limited due to the presence of Andrea Petagna and Andreas Cornelius, and operating as an out-and-out striker at senior level was not achieving the desired effect.

Since moving to Bologna in January 2020, the Gambian international has been transformed into a wide forward and he has utilized his pace as well as score some stupendous goals.

It was in the second half of the 2019/20 Serie A season in which he achieved his highest goal tally in a professional league campaign with nine while he registered his best tally of assists at senior level in the following season with eight.

So far in the 2021/22 Serie A campaign, the 23-year-old has played 19 matches, scored five goals, and provided three assists.

According to GoalPoint, he has also average 2.4 shots, 1.3 key passes, attempted 2.5 dribbles, won 0.9 fouls, and made 0.9 defensive actions in the opposition half per 90. He also has a successful dribbling rate of 54 percent.

For the first six rounds, Barrow would play on the left-wing in the 4-2-3-1 formation. From then on, Bologna coach Siniša Mihajlović has used the 3-4-2-1 formation or other back three formations, placing the Gambian on the left side of attack. 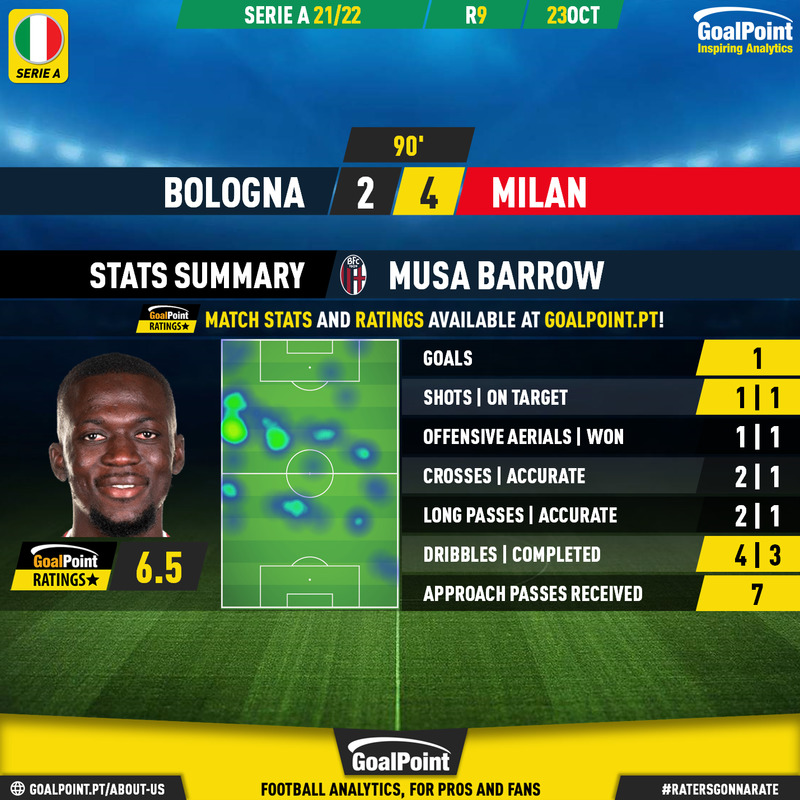 The match in which the Serbian tactician switched to the 3-4-2-1 was in the Felsinei’s 3-0 victory at home to Lazio in Week 7 and Barrow was in inspired form against the Biancocelesti.

The Gambian opened the scoring in the first half with an excellent bending right-foot shot from just outside of the penalty area and he then took the corner which allowed Arthur Theate to head the ball in for the second Bologna. Barrow then created the third goal for Aaron Hickey after switching the ball from the middle to the left flank.

His position in the game is intriguing because he was not always in the one area for too long. As the heat map illustrates, he was on the left-wing the most, but he would also move to other parts of the pitch to collect the ball.

Against Lazio, he was involved in all three goals, but his presence in the Biancocelesti penalty area was minimal to say the least.

It must be said that Bologna did play on the counter-attack throughout the game, but the 23-year-old showed that he was capable of influencing the play from outside of the box, with his goal being clear proof of that. 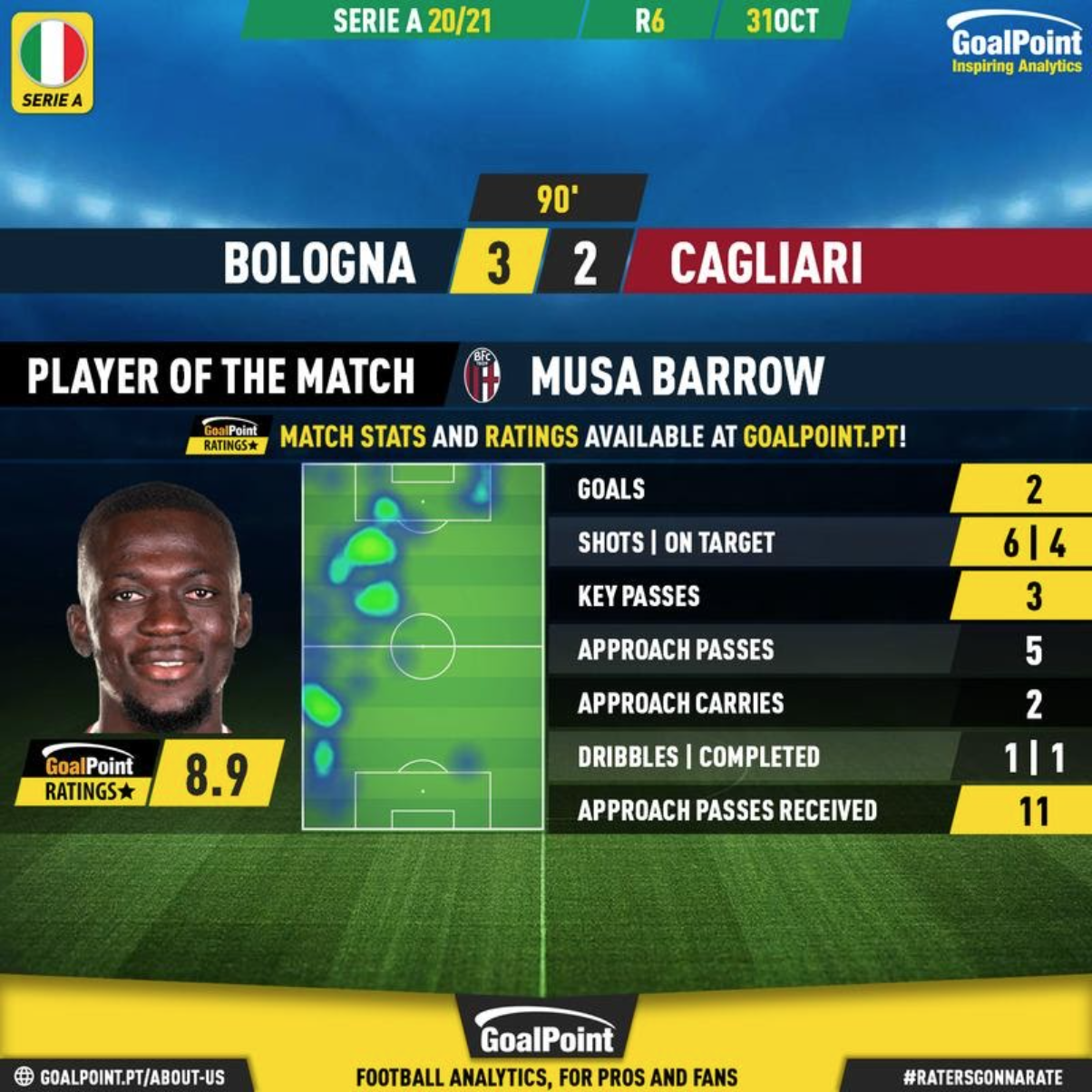 Another one of Barrow’s most impressive performances as a Bologna player was in Week 6 of the 2020/21 Serie A season, when the Felsinei won 3-2 in an exciting match against Cagliari and the Gambian scored twice.

Throughout the game, he was constantly an attacking outlet for his team and getting into dangerous positions.

He was not always fixed on the left-wing against the Isolani, and if anything, he was often in between the wing and middle. To used a dated football term, Barrow operated more in the inside-left channel.

His two goals came from six shots, four of which were on target, and he was a threat when advancing. He made three key passes, five passes on approach, and he received 11 passes while approaching the opposition box.

In addition to operating in positions similar to an inside-left of the past, the heat map indicates in this game that he was still able to perform defensive tasks and he dropped back into the left-back position on a few occasions. 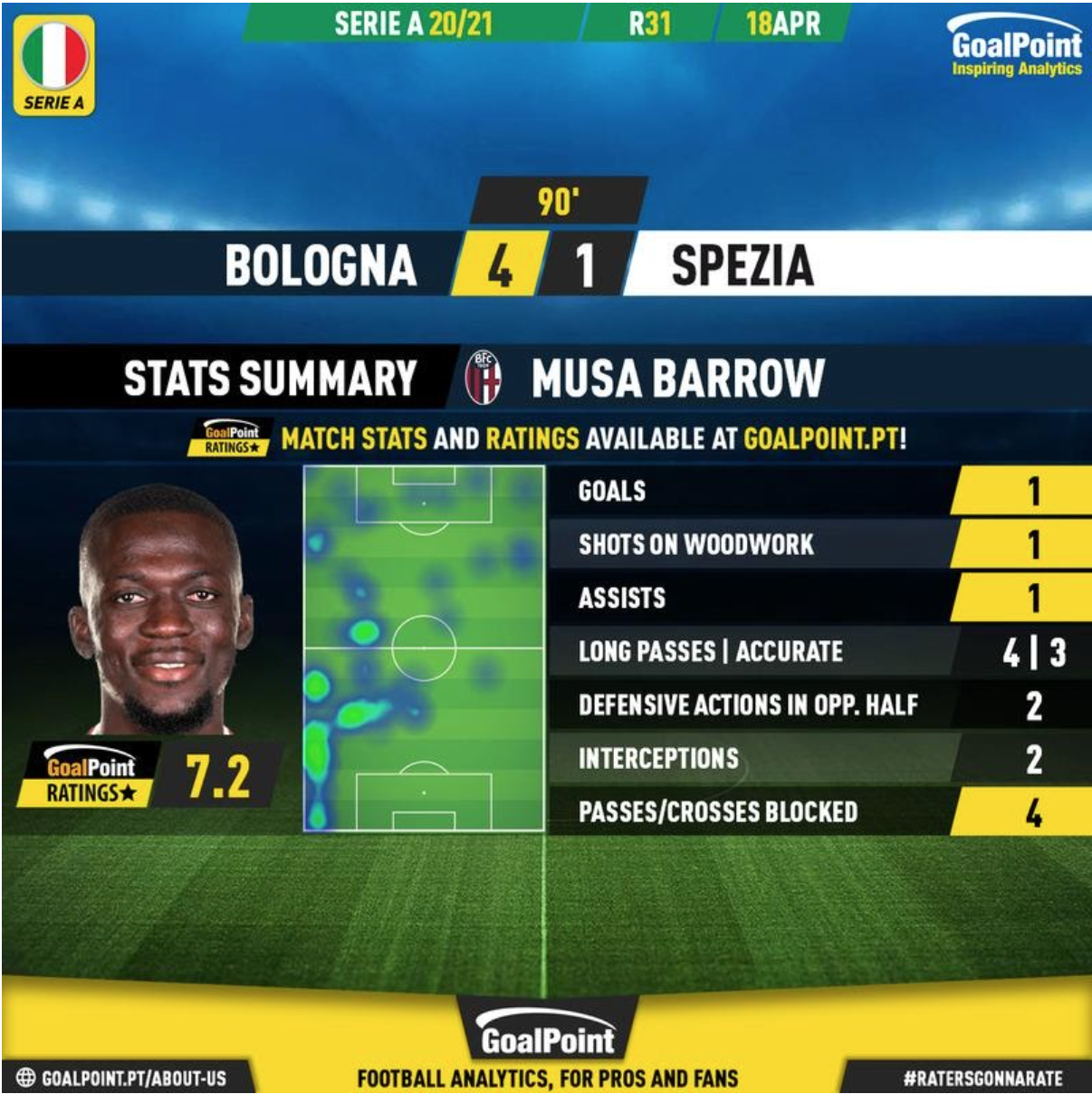 An anomaly in his performances was in the 4-1 victory at home to Spezia in Week 31 of the 2020/21 Serie A season. He scored once, hit the woodwork on another occasion, and he supplied an assist for Mattias Svanberg.

When looking at the heat map through, he made more of a presence in his own half than in the opposition one. This is perhaps due to Spezia having 59.7 percent of possession, forcing Bologna to be defend deeper than one would hope in a home game.

However, he did impress in some of the defensive statistics. Barrow made two interceptions, two defensive actions in the opponent’s half, and three out of four long passes were successful.

To have the impact that he did offensively in this game shows that there are matches in which he does not have a lot of the ball and he can use the ball to best effect.

His form with Bologna prompted the club to purchase him from Atalanta for €14.5 million in the summer of 2021 after spending 18 months on loan from La Dea. His performances in Italian football have also drawn the attention of his national team. 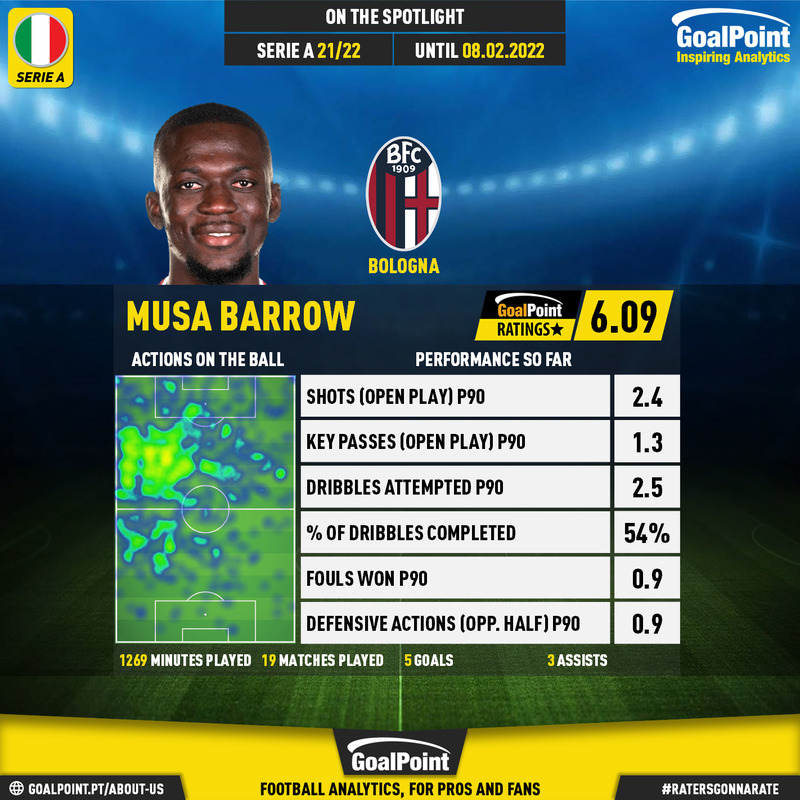 Barrow was selected to represent Gambia at the recent African Cup of Nations and he played in all five of his country’s games as it went on to reach the quarter-finals.

The 23-year-old played every minute at the tournament, scored twice, supplied two assists, and averaged four shots per game before hosts Cameroon eliminated the Gambians. Barrow now has four goals in 21 matches for his country but a player of his talents is capable of improving on that strike rate.

Musa Barrow is developing into one of the most exciting forwards in Italian football and his exploits have also drawn the attention of English giants Liverpool.

He has displayed his ability to score some lovely goals and also create chances for teammates while also helping his team defensively whenever called upon.

From a raw striker in his younger years, the Gambian is now an all-round forward with many facets to his game. If he does leave Bologna in the near future, coaches will be able to work with a forward that is both technically and tactically flexible.