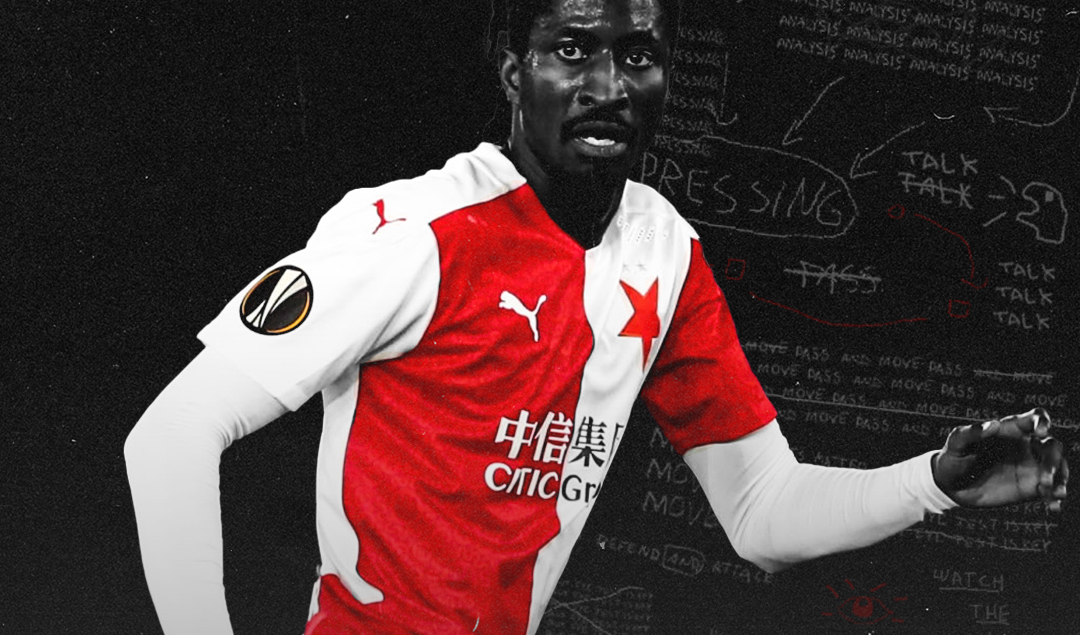 Standing at 6 feet and 2 inches tall, blessed with physical strength and an eye for goal, very few wingers in world football can boast of Peter Olayinka’s attributes. The Nigerian has all it takes to be a dangerous centre forward but he’s played primarily on the left-wing for most of his time in Europe. Peter’s positioning is so good it almost looks like luck. Whether he’s playing down the middle or on the wing, he’s more than likely to be on the end of a loose ball.

He runs the channel so well which makes him easier to find for his teammates, the same reason he scores a lot of tap-ins and easy-looking goals. Olayinka does most of his running off the ball and in behind the defenders rather than straight at them like a regular winger. He’s never static, always on the move looking to provide his teammates with an extra passing option and breaking the lines (pun definitely intended) defensively.

Slavia manager, Jindřich Trpišovský prefers to utilise Peter as a winger for his versatility. He can turn a standard 4-3-3 into a 4-4-2 very quickly without altering the shape of the team drastically. Slavia Prague’s fluidity in attack is dependent (to an extent) on Olayinka’s ability to strategically step in-field and back out when it’s needed. A prime example of his movement and the impact it has on opposition defences is the part he played in Slavia Prague’s 1-1 draw in the 2019 Champions League group stage opener against Inter Milan at the San Siro.

Olayinka scored Slavia Prague’s only goal of that game but his swift movement and decision-making in the phases of play leading to the goal was just as important as the goal itself. At the start of the Slavia attack, Olayinka was on the left flank making a seemingly harmless run across the Inter defence to the other side of the pitch.

In the process he had provided a passing option to Nicolae Stanciu which wouldn’t have happened had he stuck to his assigned position. Upon receiving the ball at the right edge of the Inter box, he displayed great vision and decision making to cut it back for his teammate to have a shot on goal which was saved by Samir Handanović.

For most players, that would have been the end of their involvement but Olayinka didn’t stop his run, as if he had anticipated the save and was right on hand to fire the rebound into the roof of the net. In one passage of play, he exhibited pace, high work rate, positional intelligence and awareness, great decision making, precise execution and composed finishing all within 17 seconds.

He did all that on the biggest stage in European football and alerted everyone watching of his abilities but what he since failed to do is prove that he can deliver consistently. With his height comes aerial threat, Olayinka contests and wins several headers per game both offensively and defensively. He also tackles quite well for an attacker and is more than willing to help out defensively whenever he’s needed.

The Ibadan native has come a long way since leaving Lagos-based 36 Lion FC, and after spells in Albania, Cyprus, Belgium and Czech Republic, it seems that he will need to make the move to a top 5 league in order to earn a recall to the Super Eagles for the first time since September 2019. At 25 years old and with two years left on his contract, this summer may be the perfect time for him to make the jump to a bigger club.