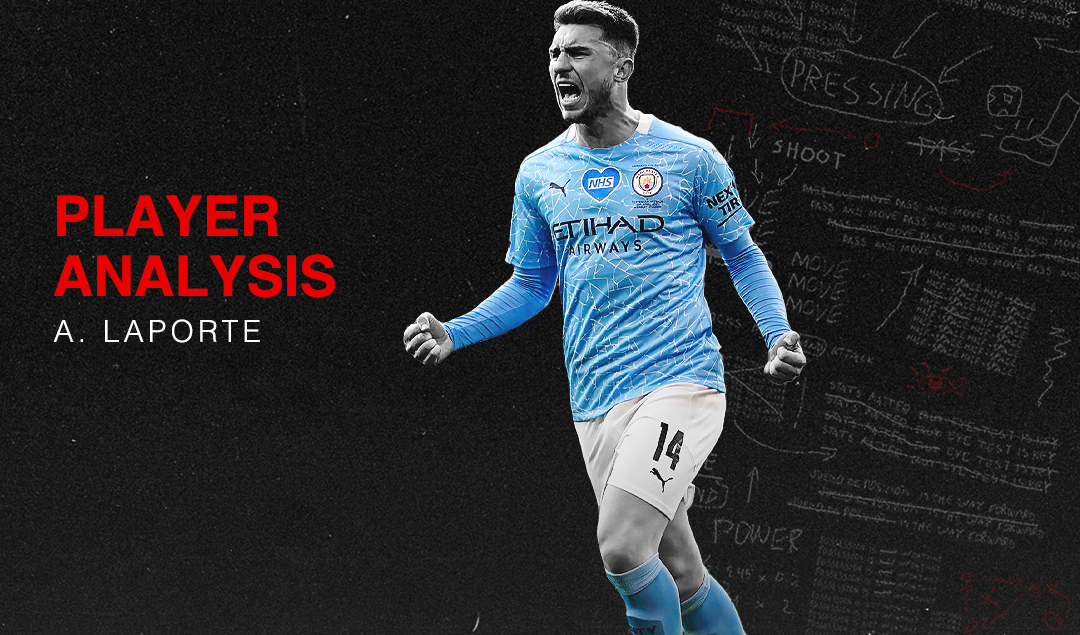 Aymeric Laporte is the biggest surprise in Spain’s squad for the EURO 2020, combined with the loss of Sergio Ramos. Once Luis Enrique perceived that Sergio Ramos would not be fit and ready for the tournament, the Spanish federation quickly initiated the process of making Laporte play with Spain. Since Laporte had not played any official games with France, he was eligible to play for Spain.

This means that Spain now holds another elite defender in their squad, one who has just won the Premier League and will try to win the Champions League. It is true that Laporte has been mainly the third choice at centre-back behind John Stones and Rúben Dias, but he has still played many minutes at a good level.  Apart from being a great centre-back, Luis Enrique was probably keen on Laporte because he is playing exactly the same style of football that Spain play.

Manchester City look to dominate games through possession and having a high defensive line to be able to counter-press after, identical to what Spain has been known for the past years. It is safe to say that Laporte is a near-perfect addition to Spain and to how they play. In this article, we will analyse Laporte’s characteristics, what he does best, and how he will fit in perfectly to Spain’s system. The data shown here will be offered with the help of FBREF.com.

In possession, Laporte is highly qualified. Otherwise, he wouldn’t play at City. Since City usually dominate possession, the build-up has to start from the centre-backs. This is the same situation in the Spanish national team.  He is very composed on the ball and can even drive with the ball at his feet. City normally plays with two centre-backs. However, during games they form a back three either with a full-back or with a midfielder who drops in between centre-backs.

When Laporte plays, he plays as left centre-back, and when the back three is formed, he also becomes the centre-back on the left. Opponents play with either one or two forwards, giving City a superiority in the initial phase of the build-up either way. Therefore, what City do is play around the centre-backs to move the forwards and once there is space in front, they exploit it to either make a pass or drive into it. This is proven in the image below.

City have played it around trying to look for an opening. Since Leicester in this case have two forwards, they have to continuously shuttle side to side. This is because they are in a 3vs2 situation against City’s defenders. Once City have passed it around, spaces get created. In this case, Laporte receives the ball with space ahead of him where he will drive into. 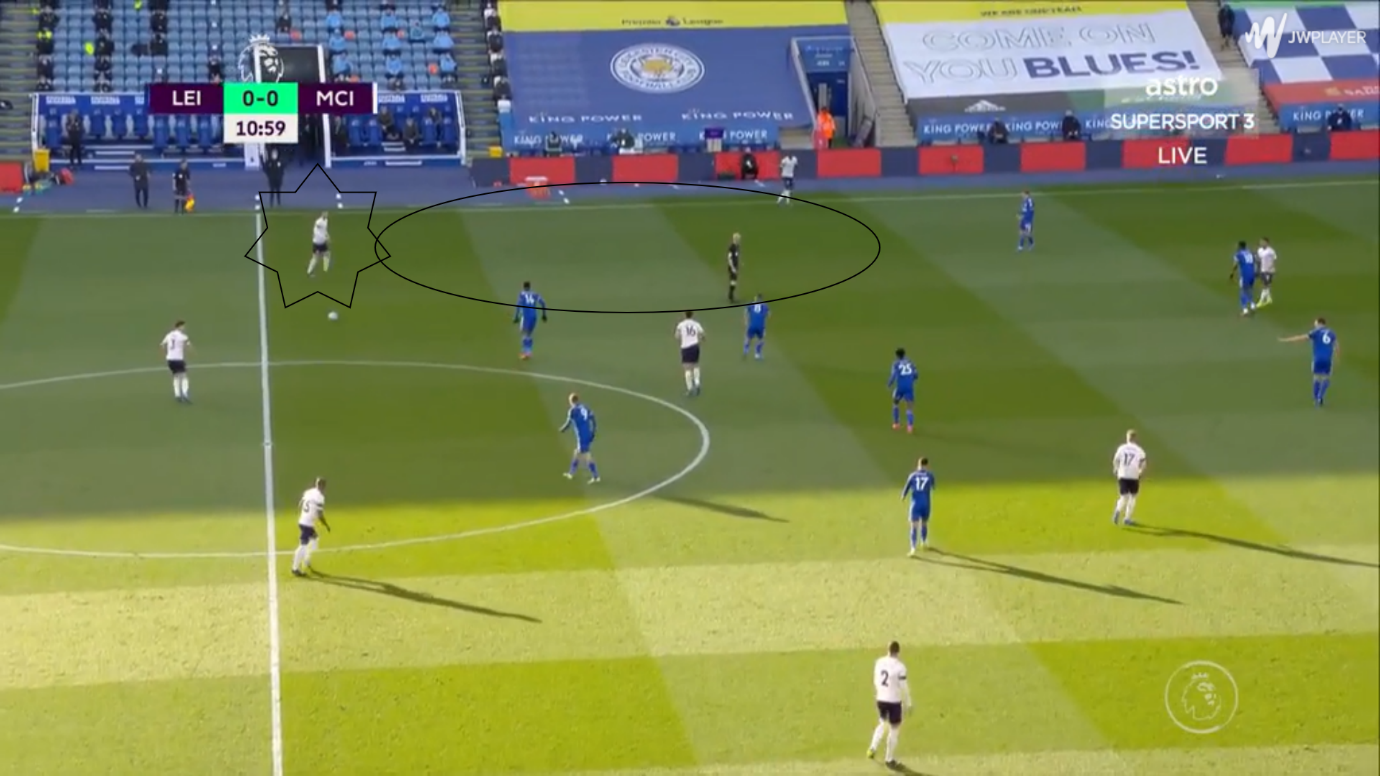 In the second image, we see how deep inside he has driven into. The purpose of this is to attract opponents to him as this will create more spaces for his teammates. In this image, it is now a midfielder that is marking him. In theory, a midfielder should not mark a centre-back but after having driven the ball, Laporte has now turned a superiority in the initial phase of the build-up, into a superiority in the midfield. 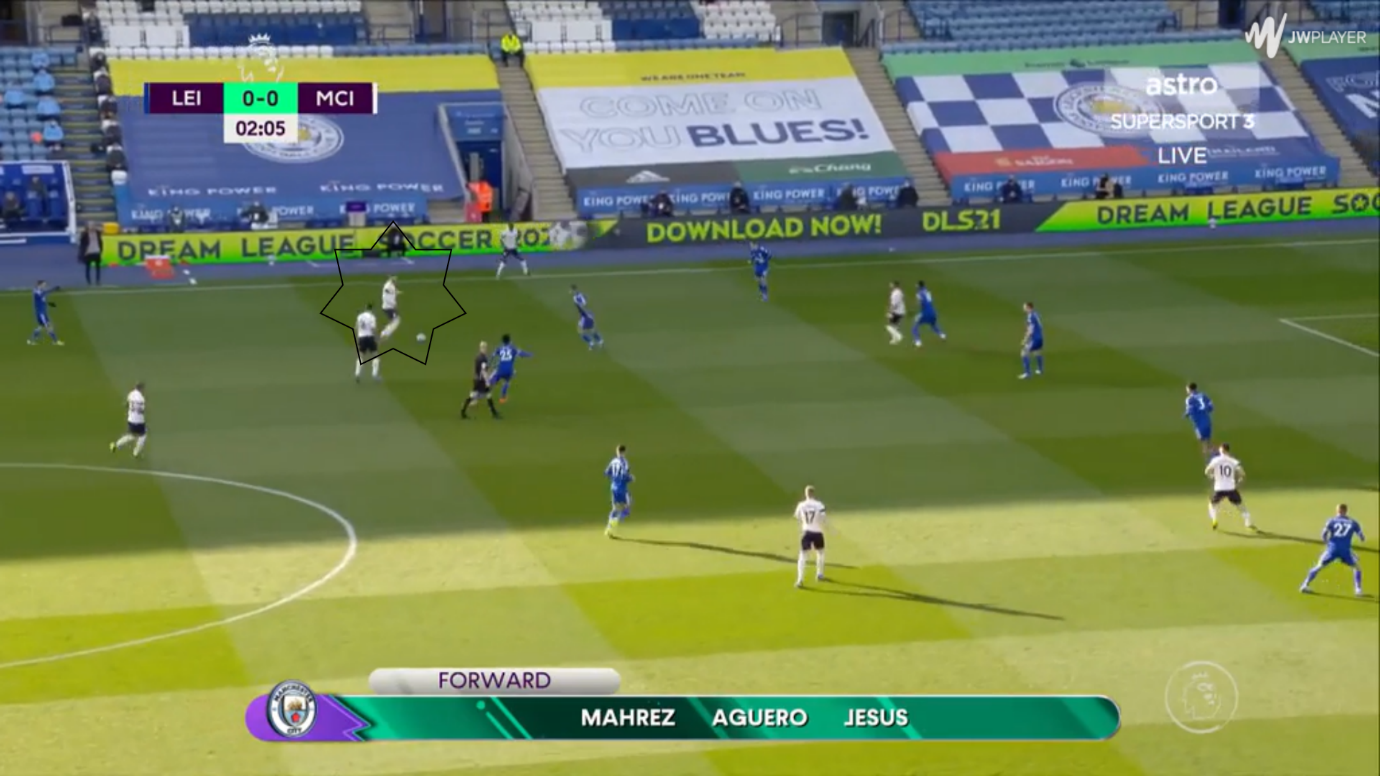 A better example of how him driving the ball inside liberates his teammates is shown below. In this example, N’Golo Kanté has had to come up to mark Laporte as he was driving the ball without resistance. By dragging Kanté to him, this has now generated the space for Raheem Sterling to come into the middle. Laporte sees this and passes it to Sterling, who can now turn and try to create danger. 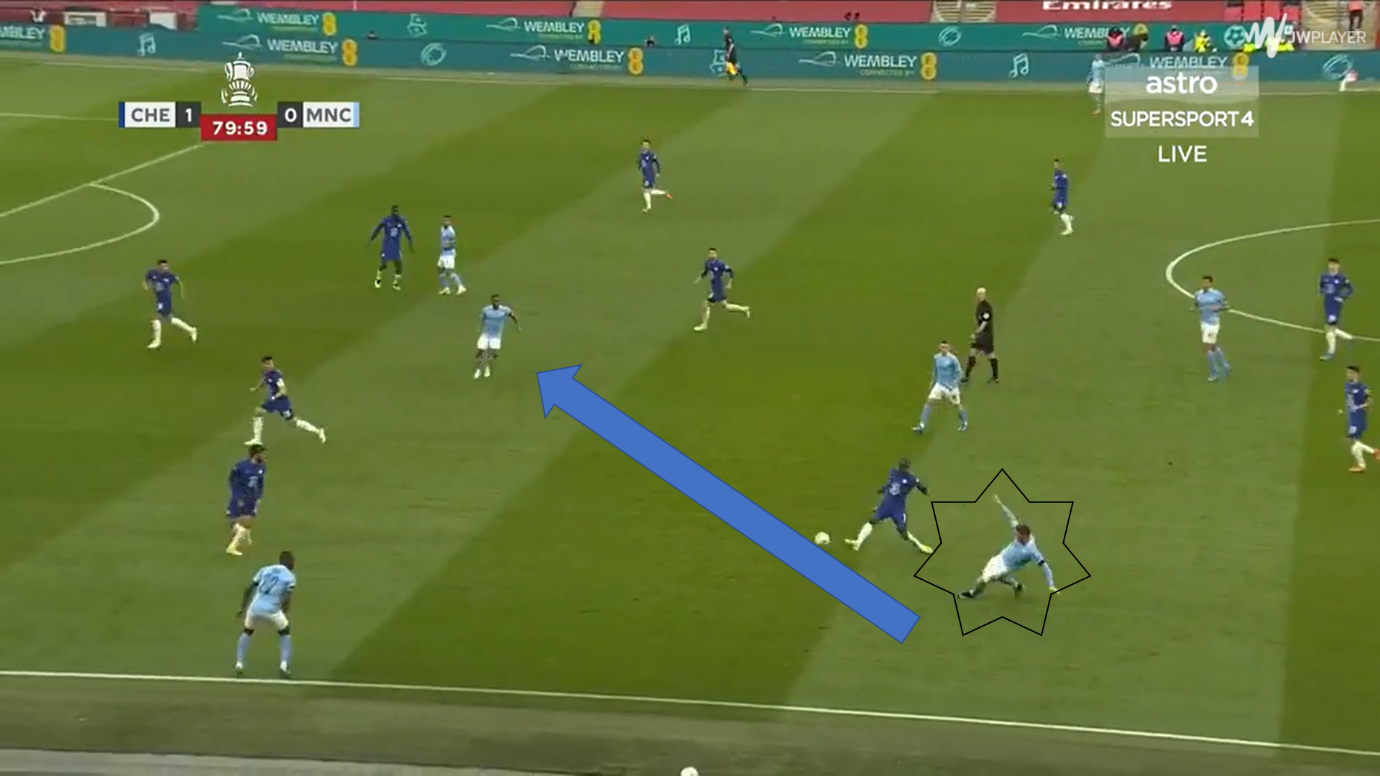 Laporte is one of the centre-backs who most helps his team progress and who is very comfortable on the ball. The only potential downside to this is that if he gets in such an advanced position and misplaces a pass or loses the ball, he leaves a lot of space behind for the opponents to exploit.

To start the build-up in the Spanish team, you have to be a great passer since Spain play a passing game to overwhelm the opposition. Laporte is no stranger to this as he possesses excellent passing abilities and has the data to show for it. However, first I would like to show an example of his passing prowess by sharing an image where he makes a difficult pass with complete confidence.

In the image below, Laporte is being pressed and his easiest passing option is the goalkeeper behind him. However, Laporte decides to play a bit riskier and makes a lobbed pass over a defender with his weak foot so that City can have a counter-attack. This pass was completed with no signs of urgency, showing his calm on the ball and the ease with which he can make complicated passes. This is also important because when Spain get pressed, they still want to play the ball out to exploit the space in behind, therefore we can see that Laporte will adapt to that strategy well.

As for his passing stats, they are truly impressive. He makes 87.93 passes per game with an average completion rate of 92%. These place him in the 99th and 97th percentile respectively, proving his passing ability. Furthermore, he makes 4.81 progressive passes per game as well as 7.82 passes into the final third, both of these being the highest among centre-backs. All in all, Laporte will have no problem adapting to Spain’s stereotypical passing game as he is currently performing the same style and with great numbers. 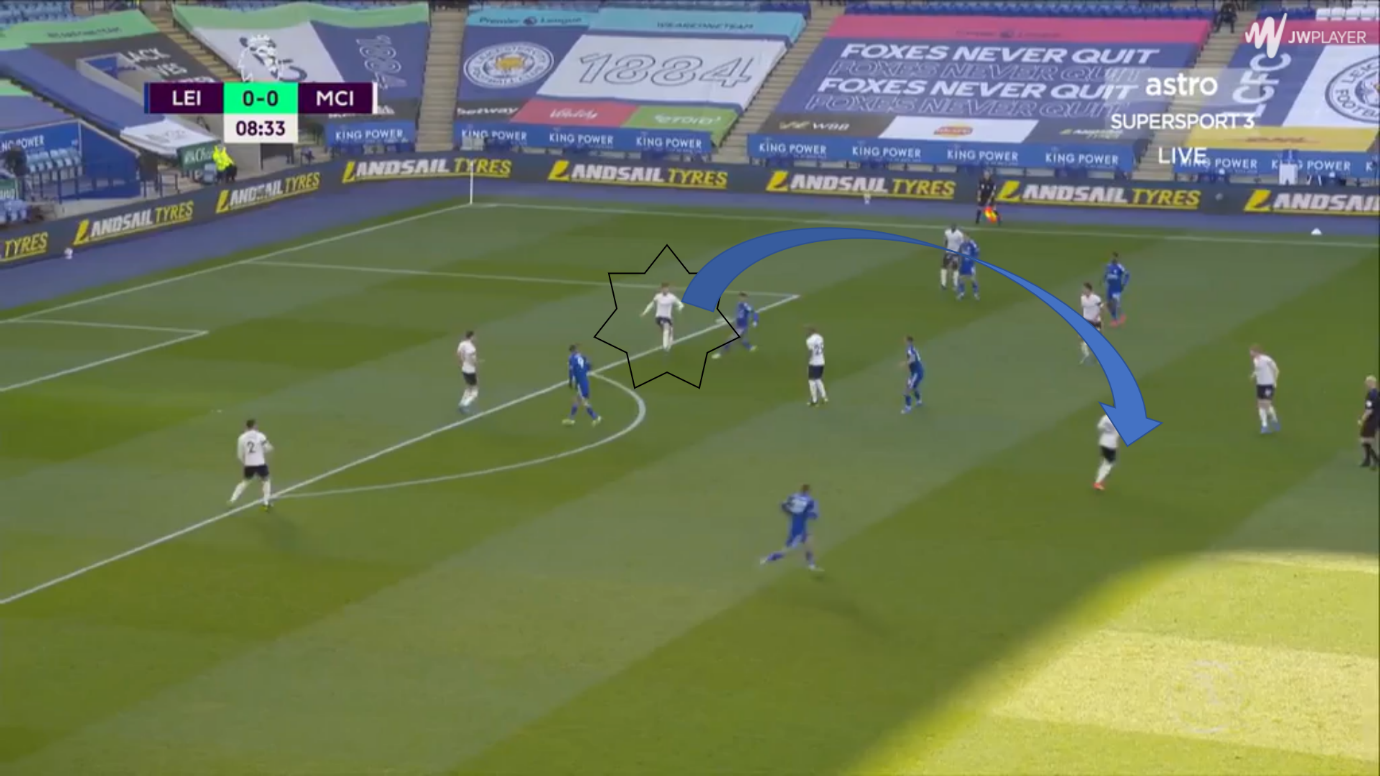 Just like Spain, City employ a high defensive line to dominate teams in the opponent’s half. This means that counter-pressing is more effective as the whole team is near the ball, but also means that there are huge spaces left behind the defence. These spaces are the most frequently attacked on by Spain’s and City’s opponents.

Therefore, Spain’s defenders have to be quick in order to protect their team of runs in behind during a counter-attack. This is no problem for Laporte who has shown that he can handle this physical necessity and we can see it below, as a through ball is made to Kelechi Iheanacho, one of Leicester’s in-form strikers.

It is true that Laporte’s starting position gives him a slight advantage but this was done on purpose by him to give himself a margin as he knows of the speed of Leicester’s strikers. Anyways, Laporte manages to get there before the striker and does a great slide tackle to clear the ball. 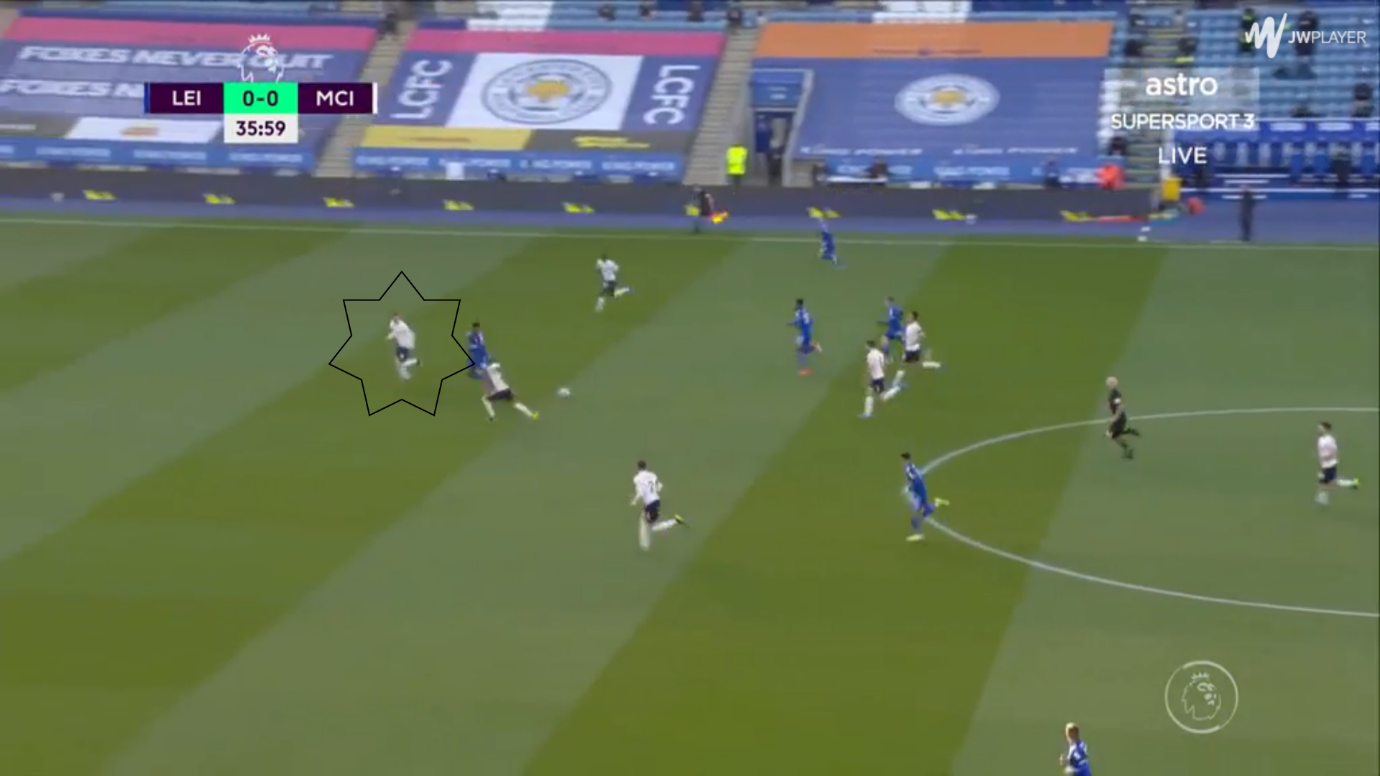 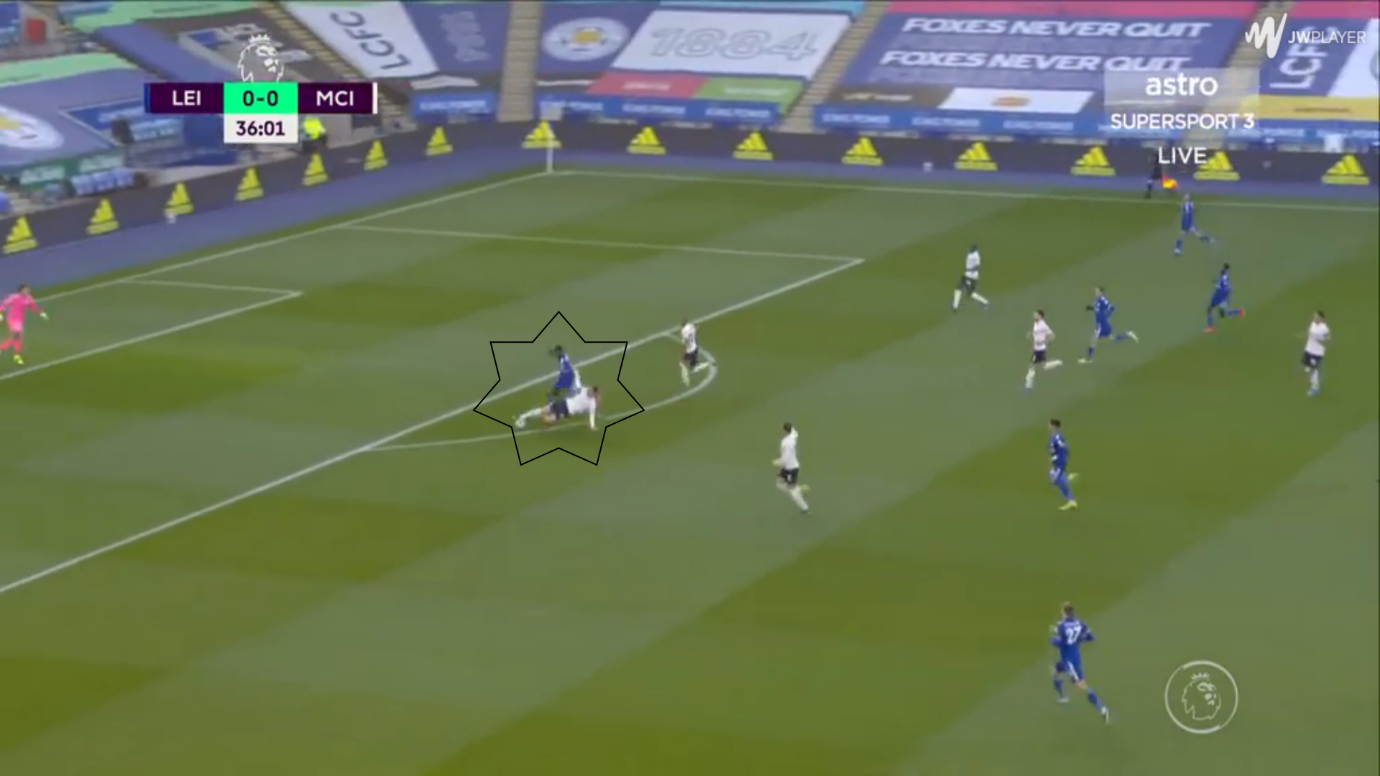 Another needed trait for any centre-back of the highest level is to position yourself well due to your good awareness. These two traits are intertwined as by being aware, it allows you to position your body to defend. Seeing how teams usually attack Spain in counter-attacks, having good these two characteristics is essential if you want to anticipate the danger and act accordingly.

We will use an example from the FA Cup semi-final against Chelsea. In the next three images we will see a sequence of play where Laporte had to defend Timo Werner during a counter-attack. The first image shows that the ball is on the side and that Werner is running into the middle. Laporte’s body positioning means he can look at the ball and at Werner’s movements at the same time. He is also running back at pace to keep up with Werner. 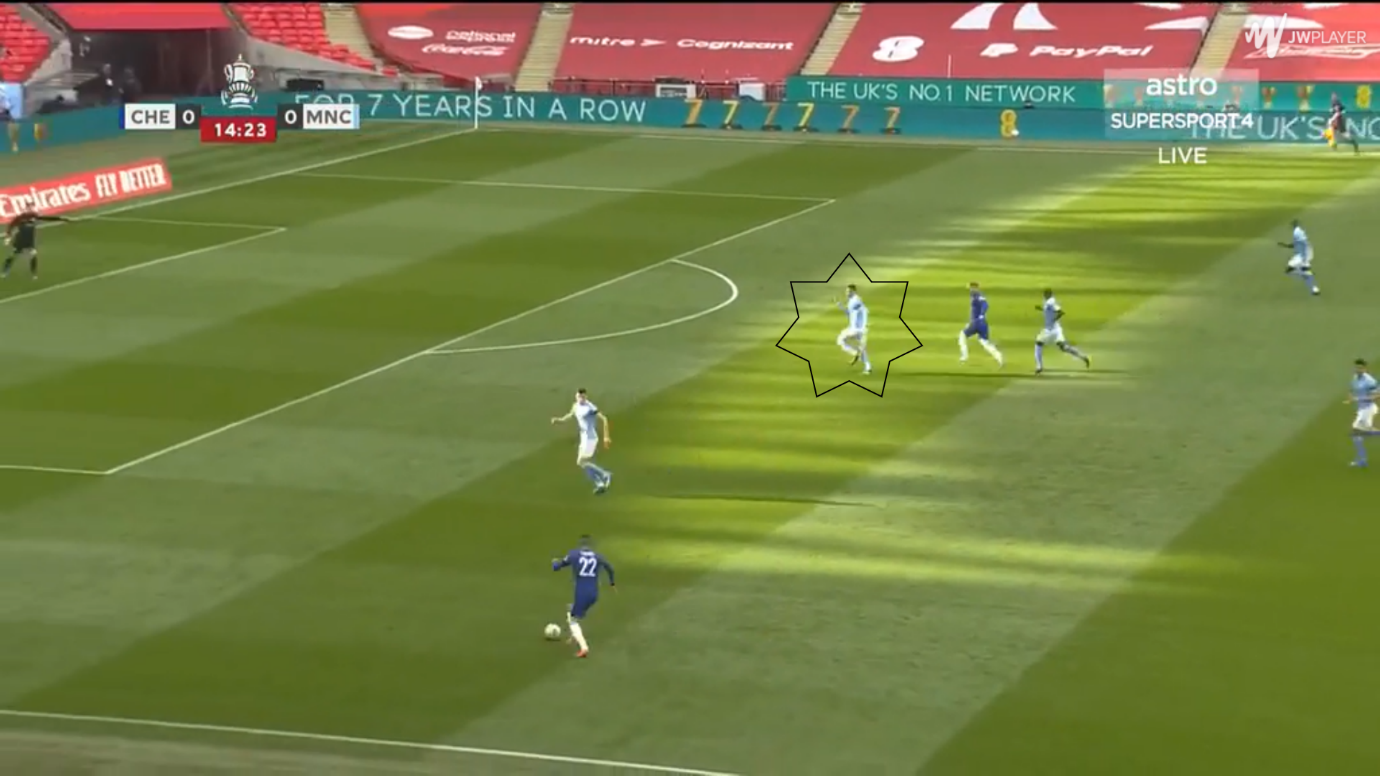 Now that the attacker in possession is closer to the area, Laporte’s mission is to put himself in the best position possible to defend the corner. Therefore, he still has his body facing the ball but is constantly looking back to see where Werner is. 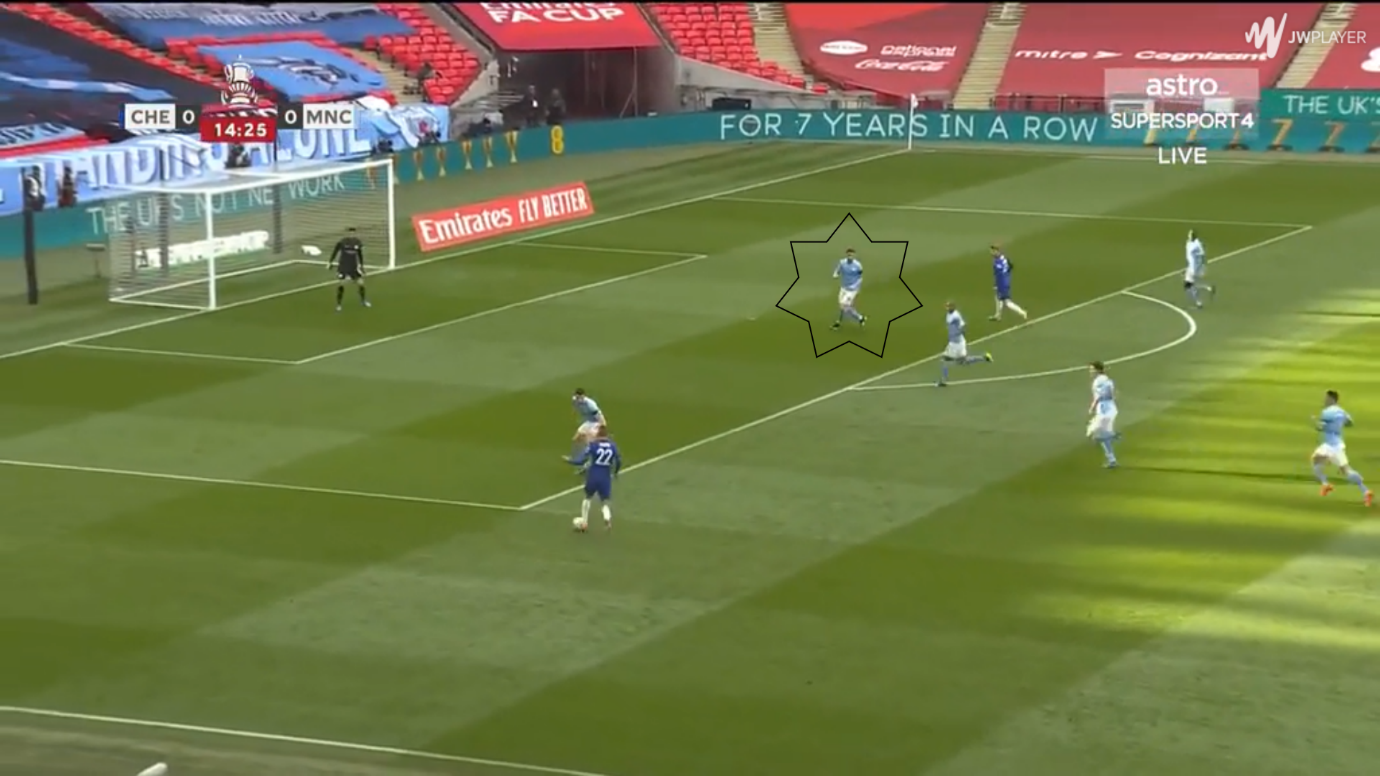 Thanks to his good defending, the man on the ball did not find a clear cross to make so had to try and win in a 1vs1 situation against his man. When he does put the cross in, Laporte is in the middle of the area with a secured position and clears the ball well. 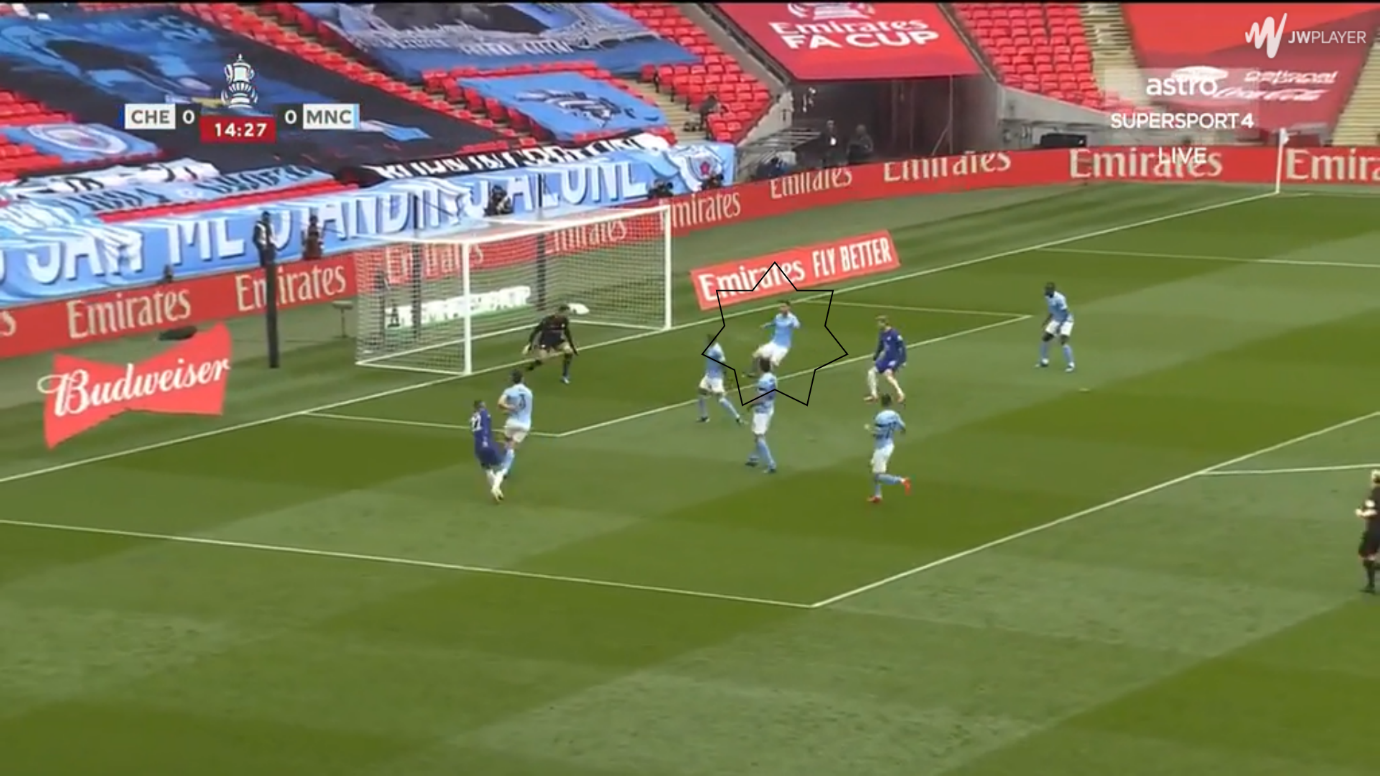 Overall, Laporte is the ideal man for Spain’s centre-back problems. He is an elite player who is playing in a system that simulates how Spain play. It is no wonder how Luis Enrique did not hesitate in luring him to play with Spain once given the chance. Honestly, thanks to his incredible passing ability and his defence against counter-attacks, it would not be a surprise for me to see him start in Spain’s opening game this summer. Hopefully he plays well and makes Spain forget that Sergio Ramos could not make it.