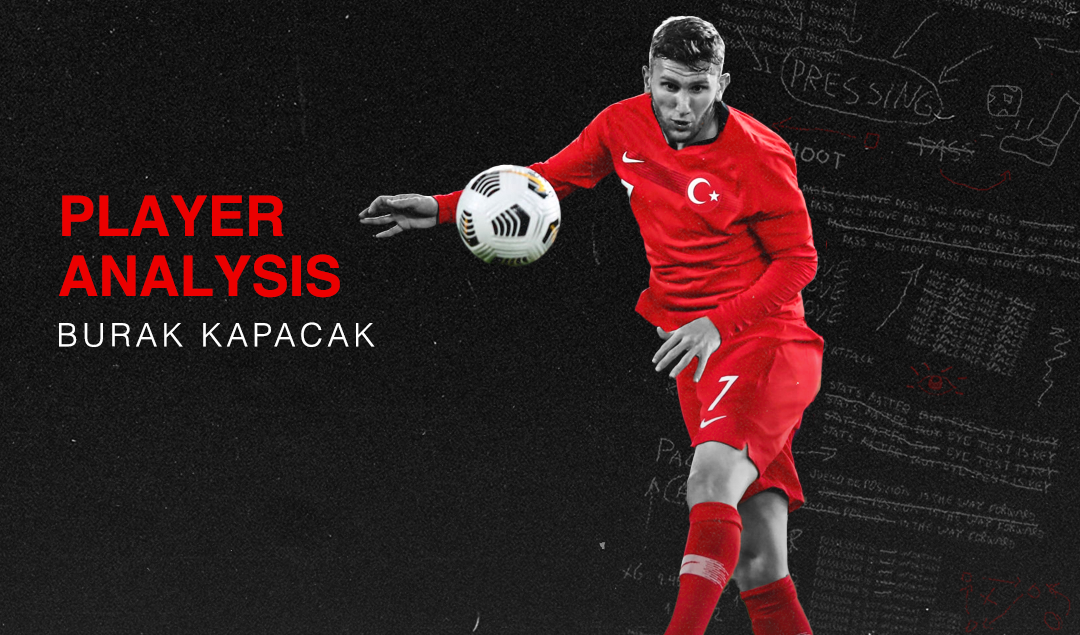 Burak Kapacak stands on the edge of the Altınordu box. Facing away from goal, he is aware of the space behind. Also the overlapping run of Emirhan Aydoğan. The result is a sumptuous back heel when nothing seemed on. It ends in a goal, and congratulations for the young provider from his teammates.

Born in the Osmangazi area of Bursa on 8 December 1999, Burak played for Tuna Gençlikspor and Altinsaban before joining Bursaspor’s academy in 2014. He made his debut on 18 May 2018 away at Gençlerbirliği, having been named on the bench against Trabzonspor a week earlier.

Burak then started two early matches in 2018/19, although lost his place once Aurélien Chedjou was signed to allow Barış Yardımcı to revert to right back. For the rest of the season he was mainly on the bench, although ended the campaign with 17 appearances to his name.

For Burak, Bursaspor’s relegation at the end of 2018/19 proved a blessing in disguise. New coach Yalçın Koşukavak was keen to revitalise the team. Young blood was the order of the day, and Burak was one of the first players he turned to.

Having developed as a right back, Koşukavak decided to solely use Burak in a more advanced role. This is a move that made sense. A right footer, his delivery from out wide is exceptional. Playing further forward has allowed Burak to use his equally good technique, touch and vision to unlock defences. 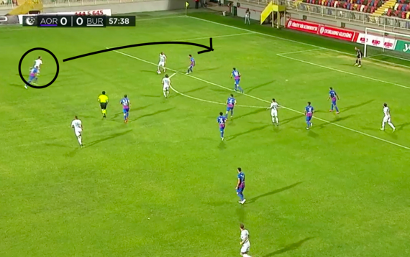 Burak just before playing his back heel v Altınordu. Note how far behind Aydoğan is when he decides to make the pass.

The formula is simple: when fit, Burak starts. In October 2019 he recorded his first assist in professional football, delivering an inviting ball for Kubilay Kanatsızkuş to head home the winner against Ümraniyespor. The next month saw Burak lay on another three for teammates, including for Onur Atasayar to score the only goal against high-flying Ankara Keçiörengücü.

An injury in February 2020 put Burak on the sidelines for a month, but he recovered to finish the season with eight assists from 24 games. Bursaspor would finish fourth, going on to lose to Adana Demirspor in the play-offs, but it had still been a good first campaign as a starter.

This mindset was one certainly present in the boardrooms of Fenerbahçe, Galatasaray and Trabzonspor. All three tried to sign Burak this summer, with the former coming closest. Fenerbahçe bid €1.6 million in September, around half Bursaspor’s asking price, and Burak remained in his home city.

With hindsight, it has proved the right decision. New coach Mustafa Er has switched Burak to the left of his 4-1-4-1 system, giving him the added weapon of being able to cut inside onto his stronger foot. The results have been excellent. On the opening day against Demirspor he delivered a corner for Ali Akman to head home. Whilst Bursaspor went on to lose 3-1, this foreshadowed the link up the young duo would enjoy this season.

The next match with Altınordu featured the aforementioned backheel, undeniably the standout of Burak’s four assists so far this campaign. Left back Aydoğan ran onto the pass, hitting the post before bundling home the rebound.

Not content with merely providing the goals, in his next two matches Burak took it upon himself to score as well. The first against Giresunspor saw him ride a challenge to burst into the box and curl round Tolgahan Acar. Meanwhile against Tuzlaspor he hit a bouncing ball sweetly on the half volley with the outside of his foot.

There were definitely worse ways to leave things before jetting off to England to debut for Turkey’s U21s. Burak came off the bench in a 2-1 loss at Molineux, playing the second half. He has been involved in the national setup since he was 16, and appears set for a long future in the famous red shirt.

It is far too soon for senior coach Şenol Güneş to use a 20-year-old playing in the second division. Then again, a case exists of why it will happen one day. Take Burak’s first game back at Bursaspor. Within 12 minutes against Balıkesirspor they have taken the lead. Akman is the scorer, but the goal is made by a wonderfully threaded pass from Burak. 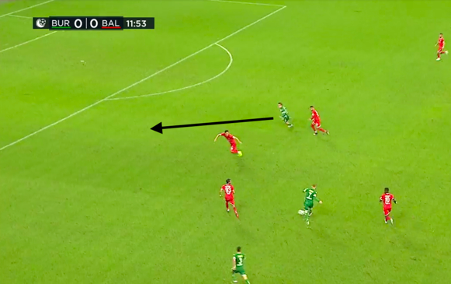 It is worth noting how youth is currently something Bursaspor’s team have in abundance. That the average age of their starting line-up is just 23 is both a blessing and a curse. It is a great environment for Akman, Burak and teammates to play with full confidence. On the flip side, inexperience is clear. Bursaspor have taken the lead in seven of their nine 1. Lig games this season, yet currently sit in mid-table.

Regardless, Burak has continued to perform. In the past month he has scored two further goals. Coming against Menemenspor and Boluspor, both followed the now familiar pattern of receiving the ball out wide, cutting infield and curling inside the far post.

In such form, it is a case of when not if Burak will leave Bursaspor. The question centres around destination. Will Fener come back in, pay up, and get their man? Or perhaps Burak’s future lies abroad, with Brighton, Leeds and Sassuolo all supposedly keeping tabs.

At the moment one cannot be sure where he will end up, but you can guarantee whichever club ends up calling Burak their own will not be disappointed.