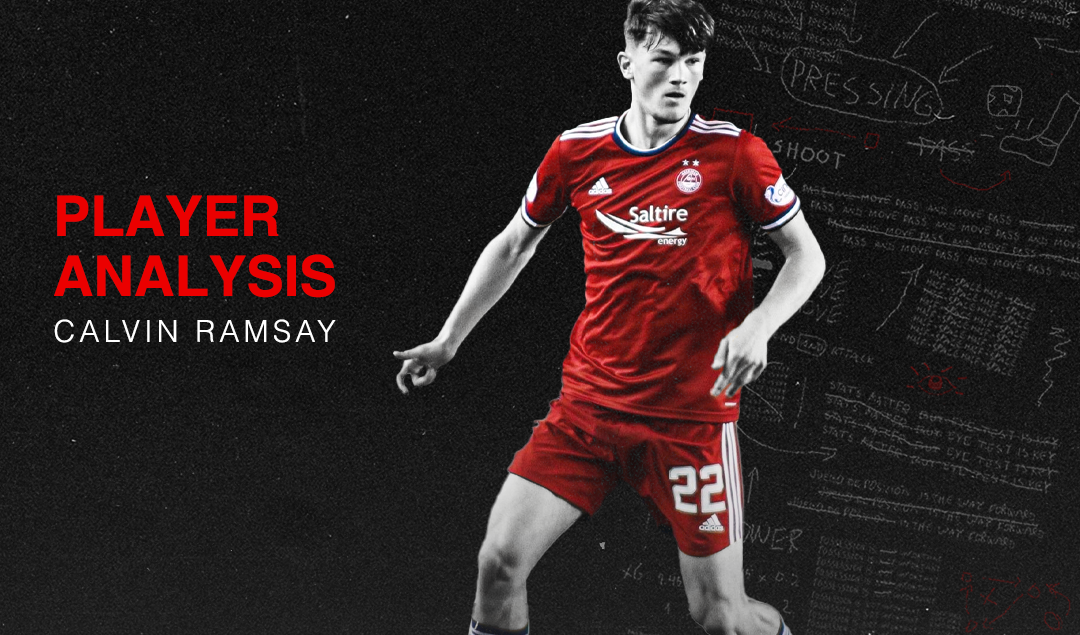 Scotland’s ability to produce world-class full backs in recent years has rightfully been well commended with Kieran Tierney and Andrew Robertson becoming two of the best in Europe. However, that has not translated to the right back position where Motherwell’s Stephen O’Donnell has tended to be the number one choice in recent years.

But a new generation of full backs is coming to the fore in the form of Rangers’ Nathan Patterson and, in even more recent times, Aberdeen right back Calvin Ramsay. Ramsay, still only 18, has made ten starts in 12 appearances for Aberdeen in all competitions this season and has become a pivotal figure in the revolution under progressive head coach Stephen Glass.

The Cove-born defender moved to the Aberdeen area at the age of six and has been local ever since, playing in the youth ranks of the club throughout his formative years – as a central midfielder in the under 10’s to 15’s.  And now he is grasped his chance to take hold of a first-team slot after the departure of Shay Logan and with Ross McCrorie being favoured in a central position.

New coach Glass arrived with a clear mandate to completely overhaul the playing style and structure of on-the-field matters after the departure of the more pragmatic Derek McInnes. Glass brought in the experience of former Celtic captain Scott Brown and ex-England set piece coach Allan Russell in order to bring a modern outlook to the club trying to play in a more expansive fashion.

Check out this assist from Calvin Ramsay in GW1! 👏 #FFScotland pic.twitter.com/skI9gOoZc0

Despite his youth, Ramsay has proven himself to be a leader on the field and is not afraid to be vocal – evidenced in a recent league game where he shouted at Scott Brown to get back into position. This kind of confidence in a leadership sense also translates to his style of play too.

That early central midfield experience has served Ramsay well with a composure on the ball befitting of a more advanced player, trying to play in tight areas being a clear identity of his play that matches what Stephen Glass wants to instil in his squad. Three assists so far this campaign evidences his ability to deliver from wide areas.

Now what is a fundamental aspect of Ramsay’s play is the variation of his delivery, with two of those assists coming from corners in the UEFA Europa Conference League – whilst his third came from a whipped near post cross into forward Christian Ramirez. 4.16 accurate crosses per 90 in all competitions and 7.28 crosses per 90 in the SPFL (the most in the division) is a clear indication as to where he feels he is best purposed in the wide areas.

His ability to cut inside and loft crosses from his weaker foot is just as good as driving to the byline and cutting the ball back across the edge of the area – highlighting that variation in play that put a spotlight on the likes of Kieran Tierney before him.

If you watch him play you can see that it is very rare that he plays a poor ball into the box and that any crosses which fail to meet a man tend to be diverted for corners because defenders are not able to progressively deal with the delivery.

Positional sense is always a big factor as to a full back’s success in the modern game and Ramsay’s awareness in this regard and reading of the game is that of a much more mature footballer. 6.89 recoveries in the opposition half per 90 and 4.92 interceptions per 90 evidence his ability to be a step ahead of play in order to react to situations where he can force a turnover.

He is aggressive in his off the ball work and this can sometimes mean he is dragged towards the ball too often losing a runner, but this is a rare occurrence and something which tends to be the case with younger players – being ironed out as they age. Another big question mark for young players in the SPFL is whether they can deal with the physicality of the league and Ramsay passes that test with flying colours.

Despite his relatively fragile physique, his positional sense and reading of the game means that he rarely has to go into difficult duels, his tackle stats are low because he tends to favour interceptions or recoveries higher up the park when forcing turnovers.

Judging by his play however, he is still well versed in winning aerial duels against some commanding opponents and is happy to go in with hard sliding tackles when required. He made his Scotland U21 international debut during the recent break despite still being 18 and instantly showcased the reason why with a goal-saving interception against Turkey.

There is a reason why Everton have now turned their interest to Ramsay after they were knocked back by Rangers for Nathan Patterson in the summer – joining Leicester, West Ham and Southampton in potential interest. “It’s how much the player wants it and Calvin clearly does,” his former youth coach Barry Robson told the Evening Express.

Whilst all of the attributes of his game are there to see, the intangibles in terms of his mentality and confidence are there to see as well – with captain Scott Brown already having a major influence on him.

Aberdeen have an ever-improving academy system and see the long term strategy of bringing through youngsters like they have with Ramsay, Jack MacKenzie and Dean Campbell playing progressive football as the more modern approach to closing the gap to the Glasgow giants.

Ramsay will already be commanding a high seven-figure fee should bids come in for him inevitably in January but more importantly for him on a personal level, he has all the hallmarks to make a bid for the Scotland national team right back position for the next decade onwards.