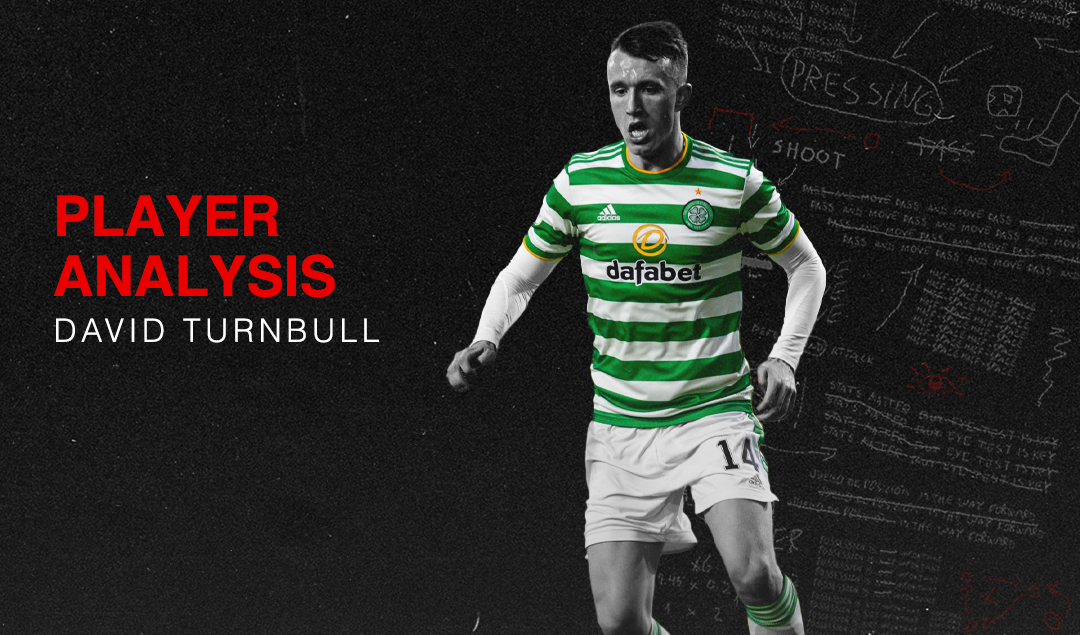 If you have watched Motherwell FC’s documentary, ‘David Turnbull: The Comeback Story’, you will have learned a few things: Motherwell have an exceptional media team, Scotland really does have terrible weather, and life can simply be cruel sometimes. The latter was certainly the case for David Turnbull.

After a phenomenal 2018/19 breakthrough season where he bagged 16 goals and 7 assists in 34 games, the midfielder was pictured at Celtic Park in June 2019 and had all but signed for the Scottish Champions. Neil Lennon had spoken with Sky Sports News to tell the world that he had arrived, and the midfielder had even been photographed wearing green and white next to his future boss. However, what transpired was the most unfortunate of cases.

The 19-year-old at the time subsequently went on to fail his medical after a precautionary CT scan highlighted a problem with his knee cartilage. In what was seen as a ‘freak scenario’, Turnbull said: “The surgeons told me I could play on for another five to ten years and it couldn’t hurt me, but that I could go into training tomorrow and it could go as soon as that and just snap off.”

Turnbull would require a subsequent knee operation which would see the deal called off. Thereafter, the midfielder would go through some of the darkest challenges, not only as a footballer, but as a person too. As his dream vanished overnight, his emotional, mental and physical strength would all be put to the test for the best part of eight months in his recovery.

Following his eventual rehabilitation, Turnbull would feature in cameo appearances for Motherwell before COVID-19’s impact across the globe would halt the 2019/20 season prematurely, with his Motherwell side in a stellar 3rd place behind Rangers. Another five appearances at the start of the 2020/21 campaign would be the end of his playing days at Fir Park as he finally completed his move to Celtic in August 2020 for a fee of around £3 million.

It was a highly coveted transfer, not just because of the previous dramas, but Turnbull was seen as an extremely viable asset to Neil Lennon’s side as they aimed to clinch ten league titles in a row and claim the bragging rights in Glasgow. Turnbull, certainly in the public eye, is a quiet operator. But when the midfielder takes to the pitch, he plays with the loudest character of them all; a driving force in midfield, constantly looking for an opening to create chances and attack.

Although Celtic subsequently failed to win the league,Turnbull’s integration has been one of the only shining lights in a largely dire campaign for The Hoops, and more importantly, it has been crucial as they head into a rebuild of huge proportion. In this article, I will analyse David Turnbull’s key contributions this season, and why he can be Celtic’s main outlet in that No.10 role for years to come.

In 31 games in all competitions, Turnbull has picked up 6 assists. Although it may not seem like the greatest return, Turnbull has completed a full 90 minutes in just 5 of the 31 games, often being substituted while looking like Celtic’s most dangerous and creative threat.

Turnbull’s first assist came in his third substitute appearance for the club – occupying the No.10 role, he laid off a perfect one-touch pass in behind for Moi Elyounoussi to finish. 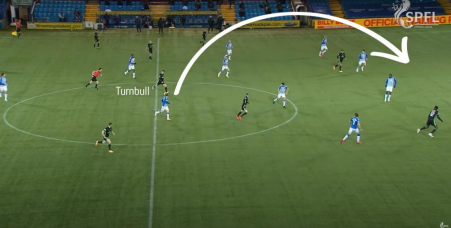 Yet another open play assist from David Turnbull – the midfielder takes one touch before looking up and playing a lofted ball which Odsonne Edouard goes on to finish. 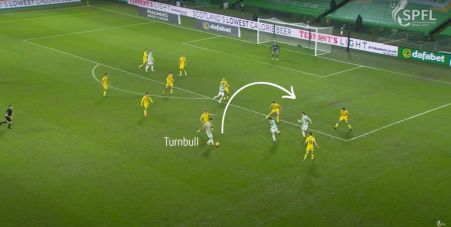 Fastly becoming one of his most dangerous tricks, Turnbull’s ability to chip the ball over defenders and find teammates is a skill that catches most defences off guard.

Yet again, another deftly chipped ball beats the press of three Dundee United players in an extremely compact area of the pitch.

This season would see Turnbull tested on the European front for the first time – albeit in a short Europa League campaign for Celtic, many fans were delighted to see the midfielder included against Lille in the last group stage tie. Celtic, already mathematically knocked out at this point, brought Turnbull and Ismaila Soro into the starting eleven in what was somewhat of a watershed moment for the pair. He grabbed another assist here – his first of four current assists from set-pieces.

Christopher Jullien finds himself in acres of space, and Turnbull picks him out to put Celtic 1-0 up against Lille.

Turnbull’s other two corner assists came when Shane Duffy bulleted in a header against Kilmarnock, and against Motherwell when Stephen Welsh – Duffy’s subsequent replacement due to poor form – scored his first goal for the club in a 2-1 win. Despite the corner threat that Turnbull provides, Celtic’s lack of height, physicality, and most importantly conviction has not done his assisting record any favours.

Consistently delivering good corners into an area where only one or two players are competent has resulted in a lot of missed chances for Celtic. The same can be said for his free-kick deliveries. Now Celtic’s most established set-piece taker, Turnbull has put in some excellent crosses, but the aforementioned lack of conviction from this season’s Celtic side has been an issue throughout.

Another great cross from a free-kick meets the head of Kristoffer Ajer who fails to test the keeper. 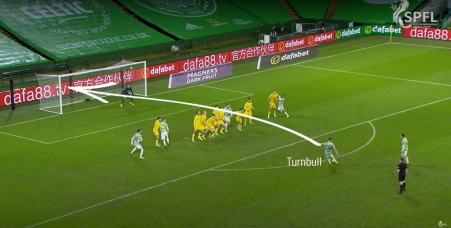 Turnbull fires a curling free-kick beyond Matt Macey and into the top-left corner.

Turnbull certainly wasn’t shy of goals before making his transfer to Celtic, the aforementioned 2018/19 season saw him score 16 goals in 34 appearances with a wide mixture of long-range efforts, tidy finishes in the box, penalties and free-kicks. It’s fair to say that this diversity in his attacking play has carried through to his performances with the Parkhead side.

His first goal for The Hoops came in the Europa League tie against Lille where he picked up a goal and assist on his European debut. The finish was indicative of Turnbull’s ability to pick up on the empty gaps left by defenders, and his technical ability to finish from different angles.

According to Infogol, the shot had an xG of 0.06, indicating a very well taken finish after some smart movement.  After scoring that goal, David Turnbull sparked to life in a Celtic shirt. Having not been given much game time early in the season, the directness and dynamism of the midfielder’s play gave Neil Lennon something to think about, and Turnbull went on to score 4 in his next 6 games.

From an opposition point of view, there are better ideas than leaving Turnbull space to shoot from range. 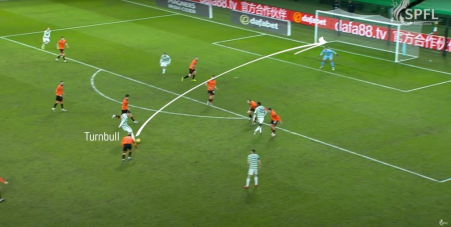 Turnbull manages to bend his shot round the Dundee United players and beyond the goalkeeper before it bounces off the post and into the back of the net.

Yet again left in space, the midfielder’s technique allows him to guide the ball around the opposition defenders, this time scoring the winning goal in a 1-0 victory against Aberdeen.

David Turnbull’s strengths are undoubtedly his ability to create; that of course being his main responsibility as an attacking midfielder. But, there is so much more to his game. His off-the-ball movement is crucial to Celtic’s 4-2-3-1 system in which he operates in-between Moi Elyounoussi – a player who often cuts on to his right foot – and James Forrest who can either be direct or cut inside and onto his left foot.

The 21-year-old’s link-up play and persistence in progressing the ball forward is naturally crucial to a team like Celtic who so often dominate the ball domestically against teams with compact defensive shapes. His defensive input is not often required domestically, with the two holding midfielders looking to deal with any action in the middle of the park, but that may be something he will still train for future European battles where he may be called upon more frequently.

For whoever the new Celtic Head Coach may be, having an asset like Turnbull as one of the players likely to remain at the club is a huge boost. For the way Celtic play most of their games, they are looking to break sides down, and a player like Turnbull who can find pockets of space, dink a pass over a tight defence, shoot from long-range when not being pressed and is an exceptional set-piece taker, you can’t ask for much more in that role.

His weaknesses arguably come with his lack of agility or pace that other players in his role possess, but for a team like Celtic, or for most teams who dominate the ball and look to attack their opponents, Turnbull is the ideal attacking midfielder. There is a big future in the game for David Turnbull.