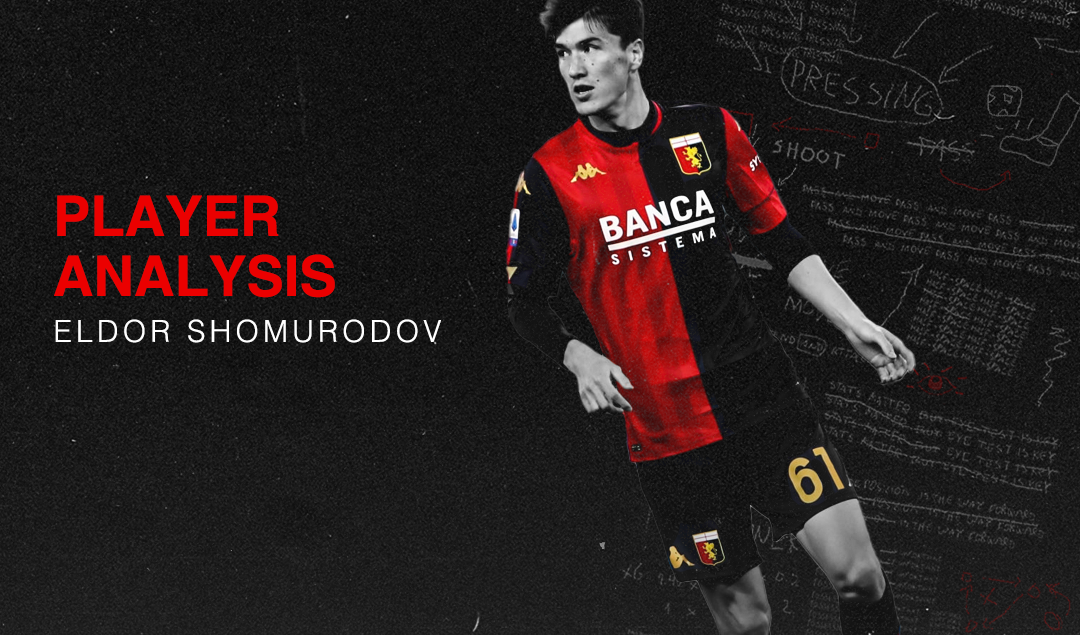 Genoa endured another tumultuous season in Serie A but the northern Italian club was able to avoid relegation for the umpteenth time. Volatile president Enrico Preziosi had hired Rolando Maran at the start of 2020/21 campaign but the former Cagliari coach was sacked in December and replaced by Davide Ballardini. The coaches placed their faith in experienced forwards Goran Pandev and Mattia Destro but the others made more than their share of cameo appearances.

Croatian forward Marko Pjaca played 35 times in Serie A while Gianluca Scamacca featured in 26 Italian league games. In addition to that quartet of strikers was a 25-year-old striker from Uzbekistan called Eldor Shomurodov, who became just the second player from the former Soviet republic after Ilyos Zeytulayev to have played in Serie A. Purchased from Russian club FK Rostov for €7.5 million in October 2020, Shomurodov proved to be a surprise revelation in Italian football, scoring eight goals in 31 matches throughout his first season in Serie A, including a run five goals in the last six rounds of the campaign.

A tall and slender striker with great mobility, the Uzbek wears the number 61 on his jersey and has his first name on it instead of his surname. With Genoa often lining up in a 3-5-2 formation, the 25-year-old would play more to the left side of attack whereas Pandev would be positioned more to the right or operate deeper. The majority of Shomurodov’s goals involved the Grifone either launching a counter-attack or capitalizing on mistakes made by opposition defenses leaving themselves open. 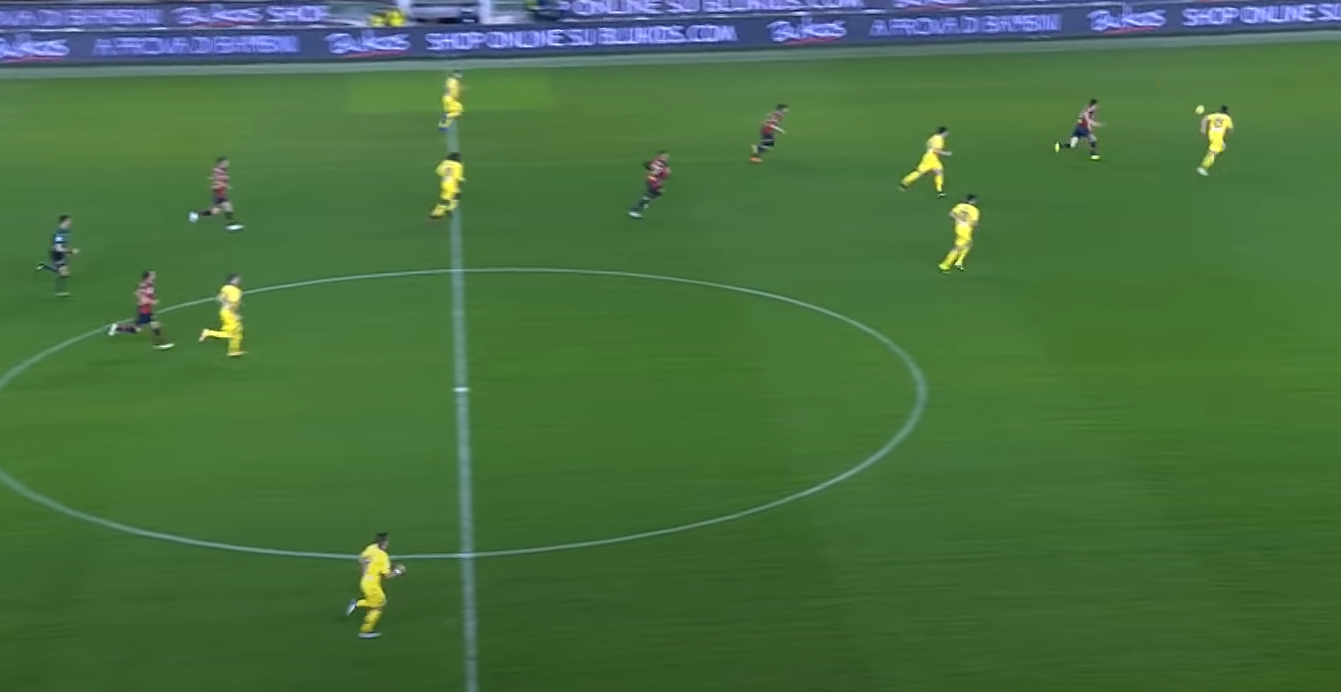 In the above photo is the build-up for his goal in the 2-2 draw at home to Hellas Verona in Week 23 of Serie A action. The Rossoblù were 1-0 down at half-time and the Uzbek striker came on to replace Slovenian midfielder Miha Zajc.

Genoa goalkeeper Mattia Perin kicks the ball long, it goes into the opposition half, and Destro heads the ball forward. Gialloblu defender Giangiacomo Magnani is able to comfortably beat Shomurodov to the ball and controls it but the Uzbek continues running.

Magnani though tries to play a back pass to Goalkeeper Marco Silvestri and his effort is very weak, which allows the Grifone forward to run into the path of the ball. After taking a touch, Shomurodov then blasts a shot past Silvestri with the side of his right foot.

It was a goal in which the 25-year-old displayed the instincts of a true striker. Even when Destro’s header was hard to reach, Shomurodov pressed and then pounced on the error in the Gialloblu defense, while the finish was textbook stuff for the forward: simple but clinical.

In Week 37 of Serie A action, Genoa lost 4-3 at home to Atalanta, but the Ligurian side was close to clinching a surprising draw and its Uzbek striker played a part in narrowing the deficit against La Dea. Shomurodov had come on as a half-time substitute, this time for central midfielder Francesco Cassata, and he was able to pull a goal back for the Grifone three minutes into the second half. 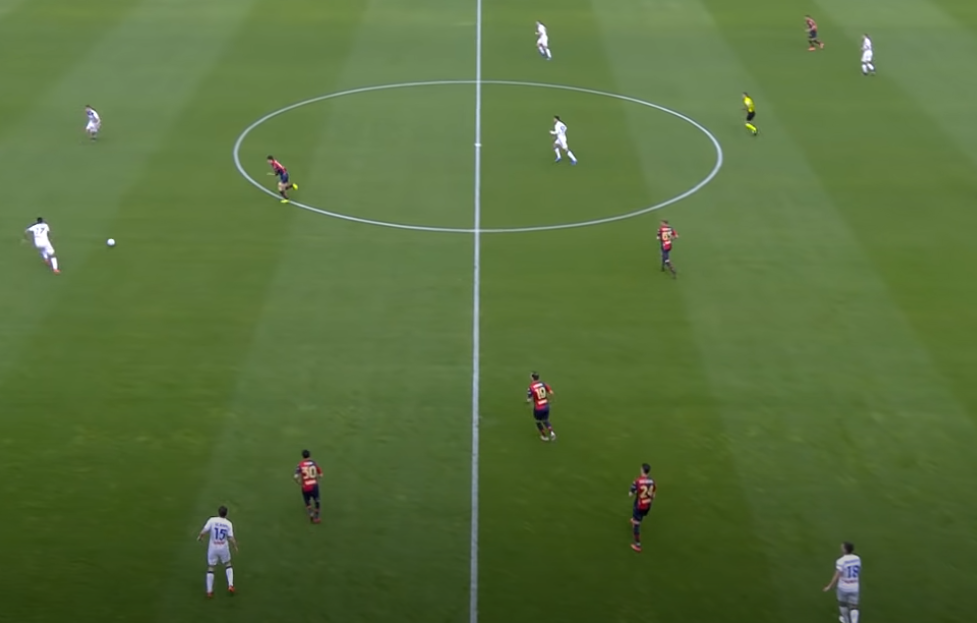 Atalanta midfielder Ruslan Malinovskyi was in the right midfield position when he played a long pass back into his own half. As soon as the ball came in the vicinity of La Dea defenders Cristian Romero and Berat Djimsiti, Shomurodov pounced on them. 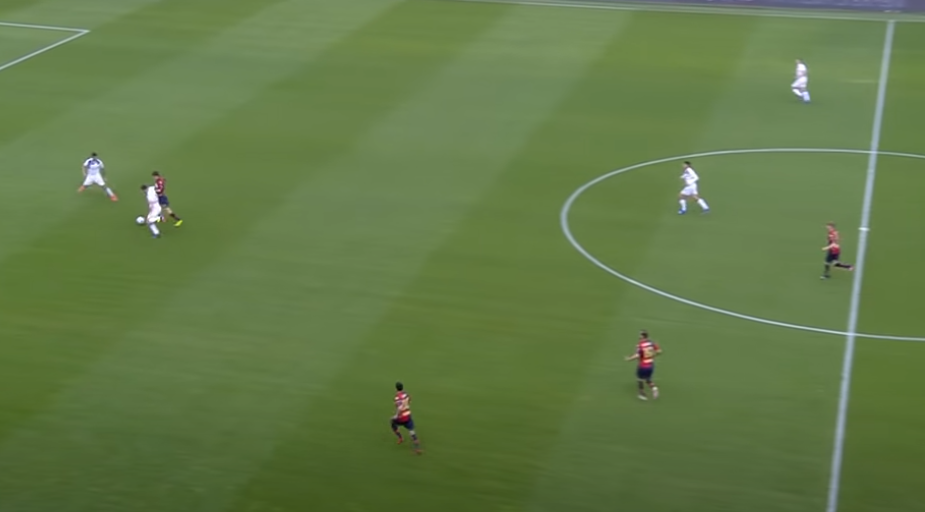 Djimsiti moved backwards and took a touch on the ball while Romero dropped further back to present a passing option. The Orobici defender botched his second touch and Shomurodov intercepted the ball. 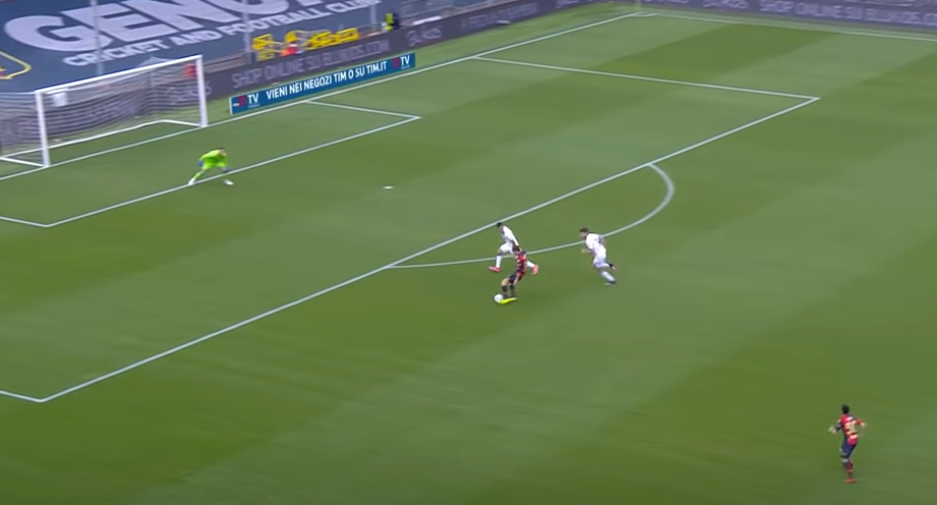 With his first touch, the Genoa striker swerves left, and before Romero could close him down, the Uzbek hits the ball with the inside of his left foot from outside of the penalty area. Atalanta goalkeeper Pierluigi Gollini dives in the right direction but the ball flies underneath him.

Once again, Shomurodov shows his determination to win the ball, sense an opportunity to capitalize on a mistake, and remain composed. With that first goal against the Bergamaschi, he also showed that he is more than capable of using his left foot to score goals. His second goal against Atalanta pulled the score back to 4-3 in the 84th minute and it stemmed from a mistake from La Dea midfielder Matteo Pessina.

A long-ball from the Genoa defense was easily collected by the Orobici midfielder but he decided to make a lateral run with the ball. Manolo Portanova chases him down and gets ahead of him. While this is going on, Pandev makes a run from deep, and Portanova then back-heels the ball into the path of the North Macedonian veteran.

As soon as Pandev received the ball, Shomurodov starts making his run. The North Macedonian took one touch after Portanova’s back-heel and then played the through-ball to the Uzbek. The Genoa striker was left unmarked and he controlled the ball with the outside of his right foot. Gollini charged off his line to try and close him down but the attacker is able to get his shot off on time and score with a shot from the inside of his right foot.

Shomurodov read the pass well, avoided getting caught offside, and he was not intimidated by the advancing Gollini, displaying the composure the put the ball into the net. The 25-year-old finished the season equal second in the goalscorers chart for Genoa with Scamacca, who also scored eight times, while Destro scored more than them with 11 goals.

Genoa ended the 2020/21 season in 11th place on the Serie A table with 42 points, two places and 10 points behind city rivals Sampdoria. Ballardini had set his team up to defend and hit on the counter-attack but he also had an even spread of goalscoring options as the Grifone avoided the drop. Shomurodov might not have been the first-choice attacker for the Rossoblù throughout the season but he demonstrated that he was capable of making an impact when granted the opportunity.