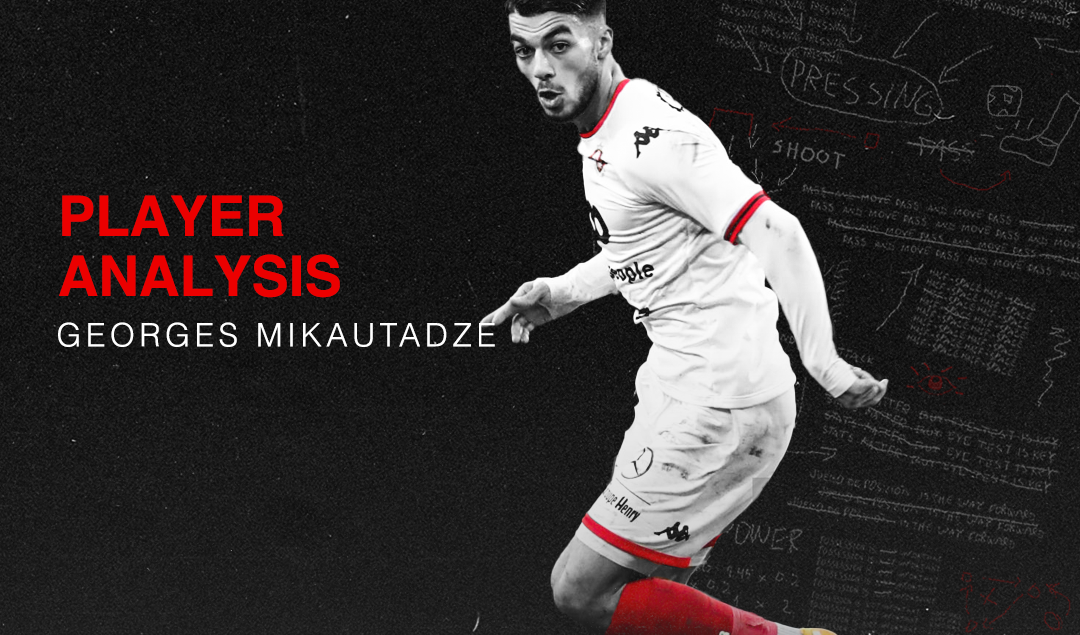 At 20 years of age, Georges Mikautadze is on track to have a breakthrough season. Born in France to Georgian parents, Mikautadze spent seven years at Lyon’s academy, before spending a lone season at AS Saint-Priest in the French lower tiers. He joined Metz’s academy in 2017, and in 2019/20, he scored eight goals in the French fifth tier with Metz B, and even made a brief substitute appearance in a 4-1 loss to Nice in Ligue 1.

Mikautadze joined Belgian second tier side RFC Searing on loan, and after eight matches, he currently leads the goalscoring charts in the Proximus League with 14 goals — 7 more than his nearest competitor Dante Vanzeir. Let’s take a look at what makes Mikautadze such an intriguing prospect.

Based on the first eight matches, it’s clear that Mikautadze has a genuine poacher’s instinct. While he isn’t the quickest forward, he has impressive movement and a clever acceleration over short distances that allows him to get into goalscoring positions with ease. His confidence is at an all-time high, and although he prefers to take shots with his right foot, he is a versatile finisher who can shoot with either foot.

Upon receiving the ball, Mikautadze has a clear understanding of where the opponents are and is adept at creating space with his first touch to get away from the opposition players. He is not a traditional central forward who will camp out in the box; he can drop deep to receive passes in the half-spaces and beat his man in a 1v1 duel. 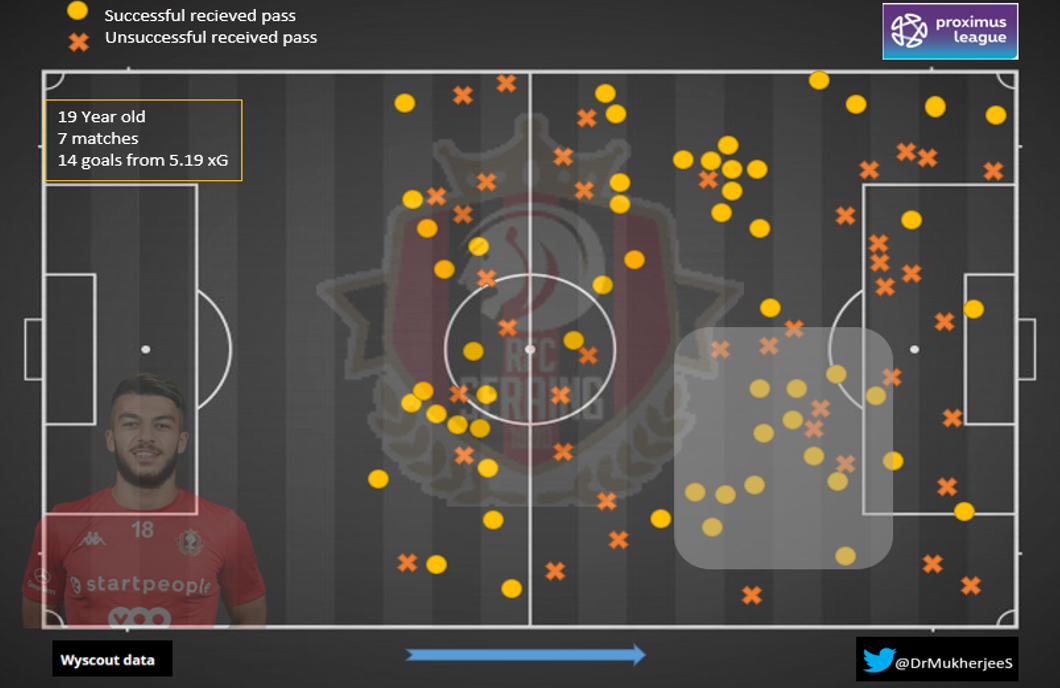 In the above picture, we can see via his touch map that he is an active player all across the pitch, and although he prefers to receive in the half-spaces, he is quite mobile in and out of the box.

If he keeps performing at this rate, he has a strong chance at becoming a member of Metz’s first team squad next season, with last season’s top scorer Habib Diallo being sold to Strasbourg for €10 million on deadline day and current top scorer Ibrahima Niane missing the rest of the season with a ruptured ACL. However, there are plenty of things he needs to work on if he is to get his shot in Ligue 1.

Mikautadze needs to improve in terms of his off-the-ball movement, as he doesn’t always make the correct run outside the box to receive the ball. Moreover, at 5′ 9″, he struggles in aerial duels and he clearly needs to bulk up in order to cope with the physical demands of France’s top flight.

To further analyze his profile, let’s take a closer look at his goals which have lifted RFC Searing to the top of the Proximus League table.

In his debut for the Belgian club, he scored four goals to lead Searing to a 5-3 victory against Lommel United. His second goal against Lommel (0.40 xG) showcased impressive movement, finishing and anticipation; Mikautadze finds himself at the right place in the right time, beating his defender for pace and slotting the ball into the back of the net after it bounces off the bar. 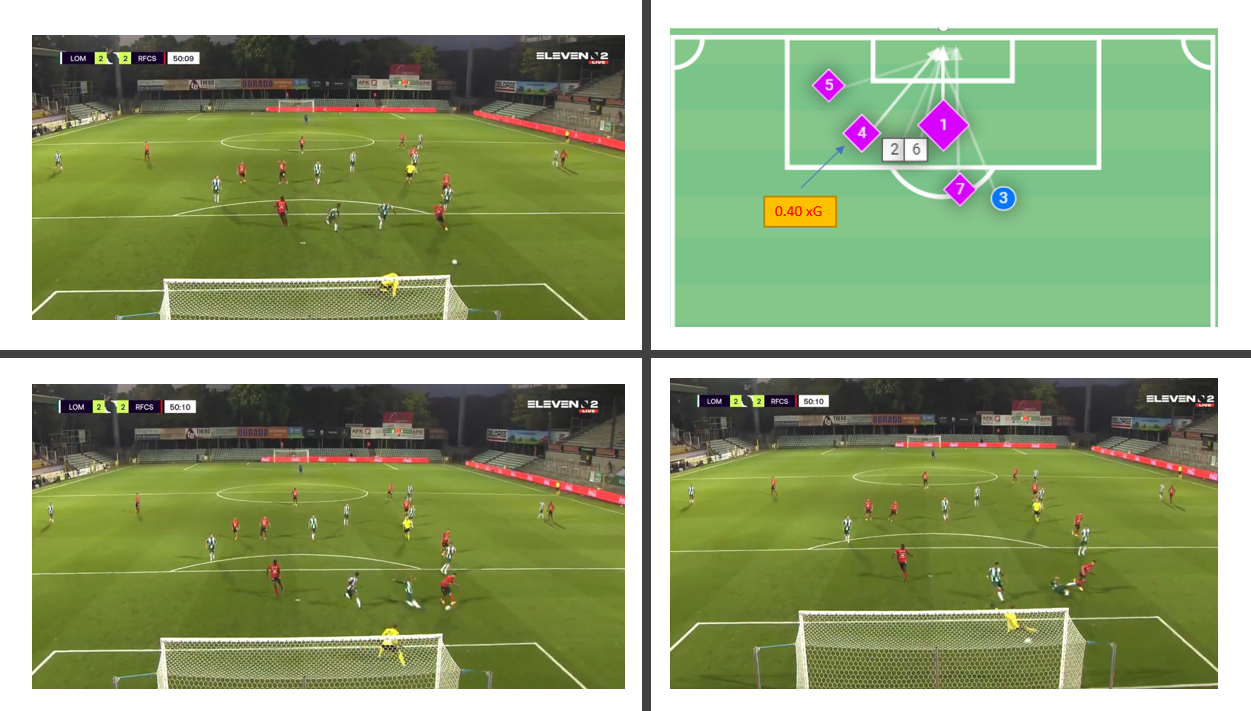 Five minutes later, he shows impressive dribbling skills to evade the defenders and create space for himself to shoot, beating Lithuanian goalkeeper Tomas Švedkauskas to put his team on the front foot and giving them the lead. 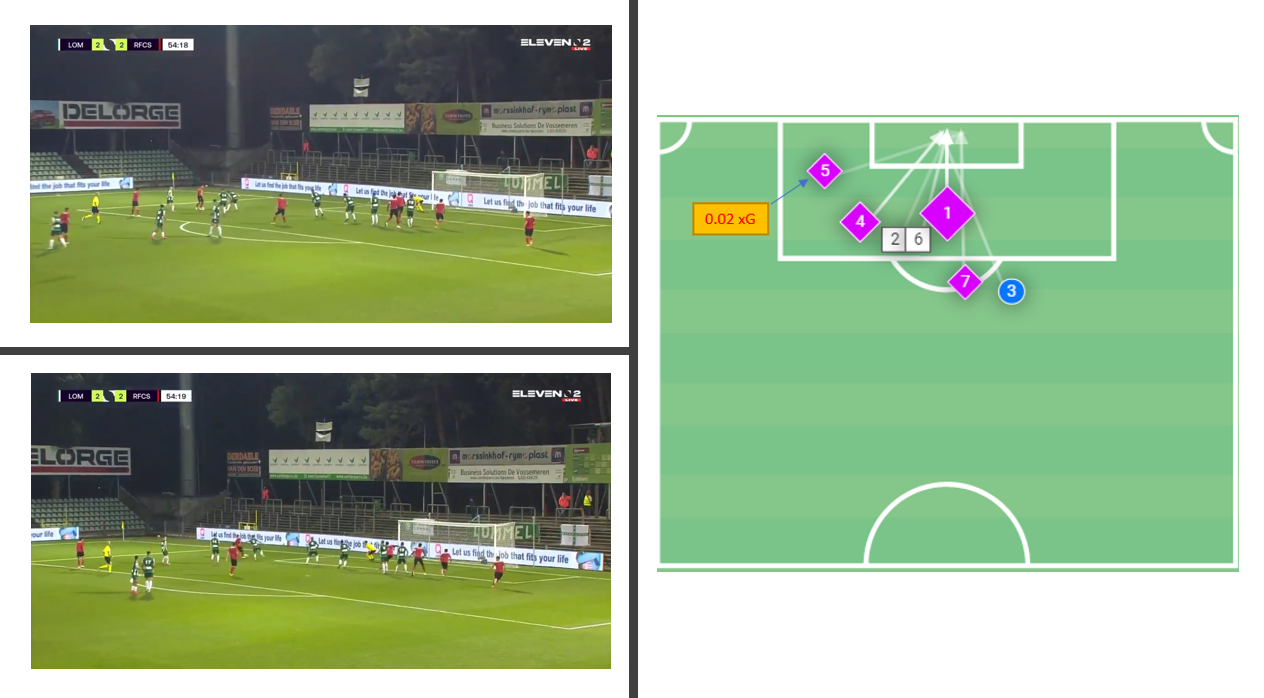 In the following match, a 3-2 victory against KMSK Deinze, he chases onto the through ball and beats the defender in a straight run. As Deinze goalkeeper Tom Vandenberghe is closing in on him, the French-Georgian forward keeps calm in a 1v1 situation with a composed lob over the goalkeeper and into the back of the net. 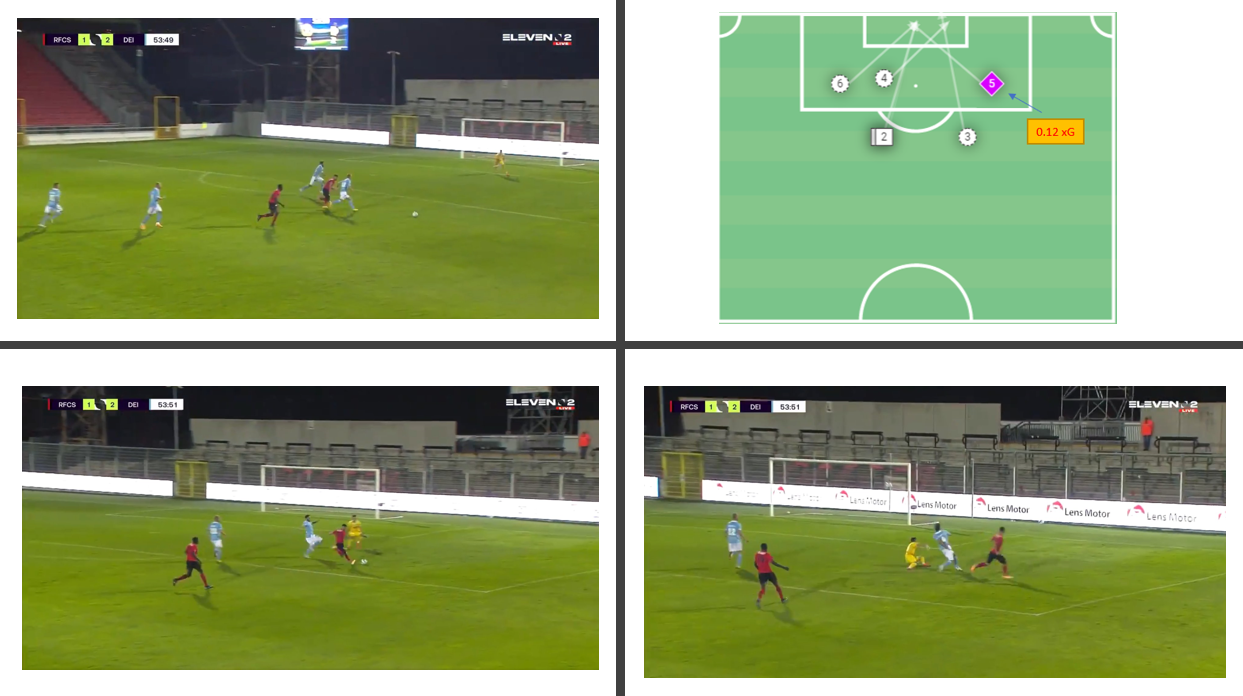 Mikautadze started the following match against KVC Westerlo, but was subbed off in the 70th minute for Abelhafid Al Badaoui Sabri as Westerlo won 2-0. During the following match, he leveled the scoreline in the 59th minute, although Union Saint-Gilloise would go on to win 3-2 via a goal from Yahya Nadrani.

Against Union, he runs onto a through ball, controls it with a well-taken touch, keeps himself ahead of the defender, and takes the shot. However, Union goalkeeper Antony Moris clearly makes a mistake here, as seen in the xG of 0.05. 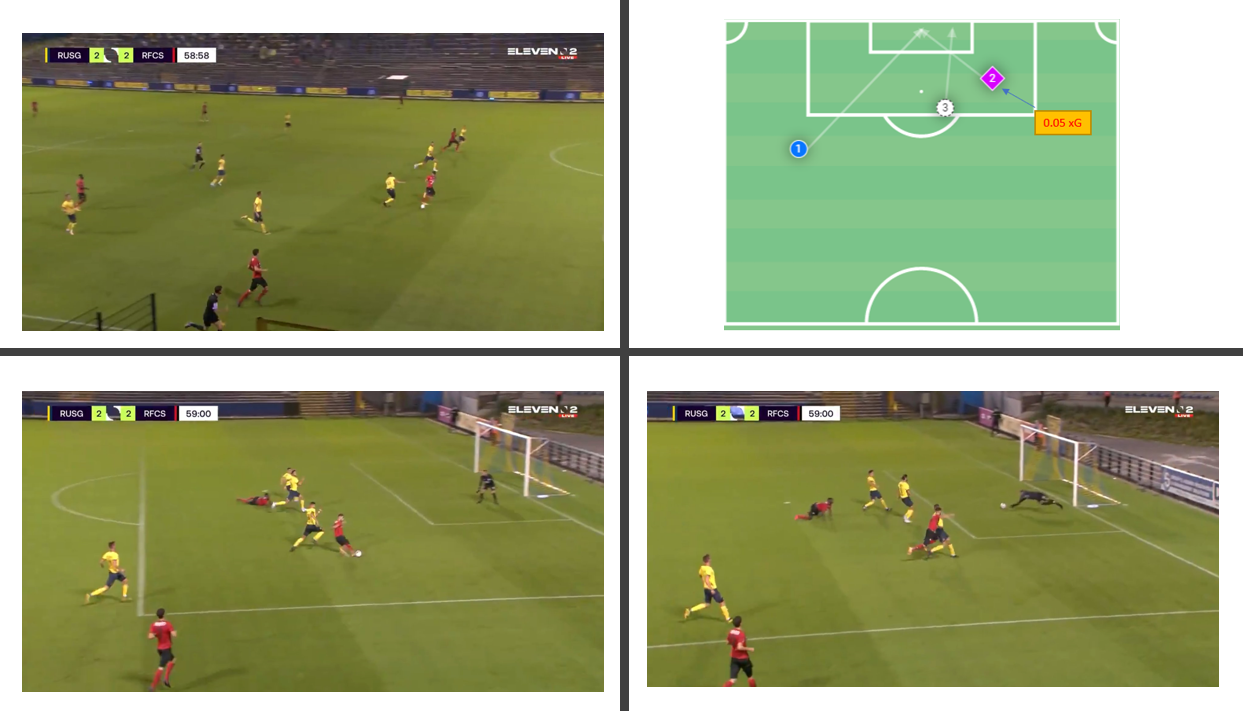 To get a better idea of his shot selection, let’s take a look at his shot map in the first seven matches of the season, provided by Wyscout. 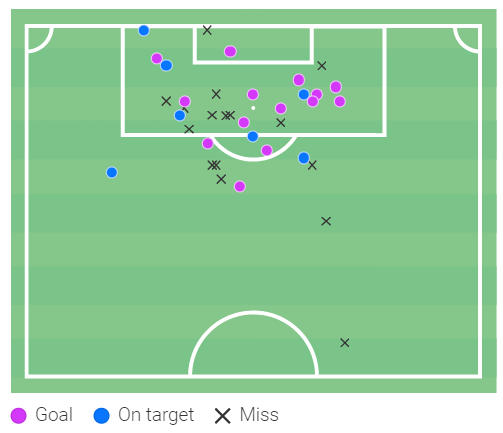 The level of defending and goalkeeping in Belgium’s second tier is relatively mediocre, and it’s obvious that he’ll need to adapt to tougher opposition if he is to return from his loan and join Metz in Ligue 1. However, his phenomenal performances during the opening weeks of the season have put RFC Searing on the verge of promotion to the Jupiler Pro League for the first time in their 102-year history, and he’ll be looking to continue his stellar goalscoring form over the course of the season.