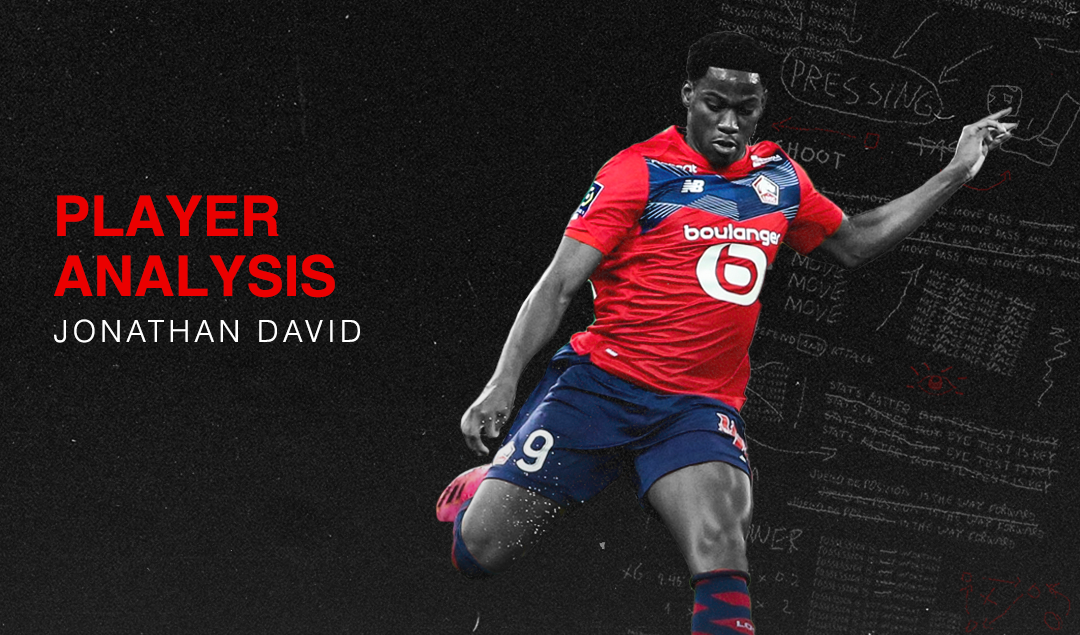 A mere eight months after ending Paris Saint-Germain’s domestic dominance and winning their first Ligue 1 title in a decade, Lille find themselves 12th in Ligue 1 after a summer exodus that saw them lose Boubakary Soumare, Luiz Araujo, Mike Maignan, and perhaps most importantly, manager Christophe Galtier. However, perhaps the lone shining light in Les Dogues’ worrying form is the breakthrough campaign of 21-year-old Jonathan David.

Born in New York City to Haitian parents, David moved to Port-au-Prince, Haiti when he was three months old before emigrating to Ottawa, Canada at the age of six. David remained in Canada until 2018, when, after finally turning 18 years of age, he left for Europe and joined Belgian side Gent.

David made his professional debut on August 4, 2018 against Zulte Waregem and scored a stoppage-time goal to salvage a 1-1 draw; one month later, he made his senior debut for the Canadian national team and bagged a brace in a 8-0 win against the U.S. Virgin Islands. Overall, David would score 37 goals and 15 assists in 83 appearances for Gent, earning the attention of Lille who signed him on a five-year contract on August 11, 2020.

Perhaps the pressure of being the most expensive Canadian transfer to date, the pressure of replacing outgoing striker Victor Osimhen, and the adaptation to Ligue 1’s physical style of play can all be attributed to David’s slow start at France. David did not score his first goal in France’s top-flight until November 22, netting the final goal and picking up an assist in a 4-0 win against Lorient.

Two weeks later, David opened the scoring in a 2-1 win against Monaco, but it wasn’t until his 21st birthday on January 14 that his fortunes began to turn around. After scoring a 91st-minute winner against Reims on January 17, David came to the rescue the following week by scoring the lone goal of a 1-0 win against Rennes.

The Canadian forward grabbed the final goal of Lille’s 3-0 victory over Bordeaux and followed it up with braces against Nantes, Marseille, as well as scoring the sole goal of a decisive 1-0 victory against Paris Saint-Germain. As Lille and PSG went neck in neck for the title, David delivered three goals and one assist in the final five matches of the campaign to edge Mauricio Pochettino’s side by one point to the Ligue 1 crown.

His debut season was a successful one as he formed a unique frontline partnership with veteran striker Burak Yilmaz, 15 years David’s senior. Between them, they scored a combined 29 goals, 16 for Yilmaz (4 of which were penalties) and 13 for David. The value of his goals was of great importance as they contributed to 22 points out of the 83 points that Lille finished the season with.

He scored the lone goal in a one-nil away win over Stade Rennais, scored a brace in the two-nil away win at Nantes, as well as scoring another brace in the two-nil win at home to Marseille and a crucial goal against PSG on matchday 31 at Parc des Princes, where his shot deflected off of Thilo Kehrer and into the back of the net to give Lille an early lead and a crucial victory.

David is a typical fox in the box type of striker, albeit with good off-the-ball movement and blistering speed. He is a clinical finisher who scores a wide variety of goals, whether shooting it with power or going for accuracy with the side of his foot. He scores with both feet confidently and has a strong aerial ability, boasting a unique combination of physical and technical attributes that will surely see him get a big move soon. 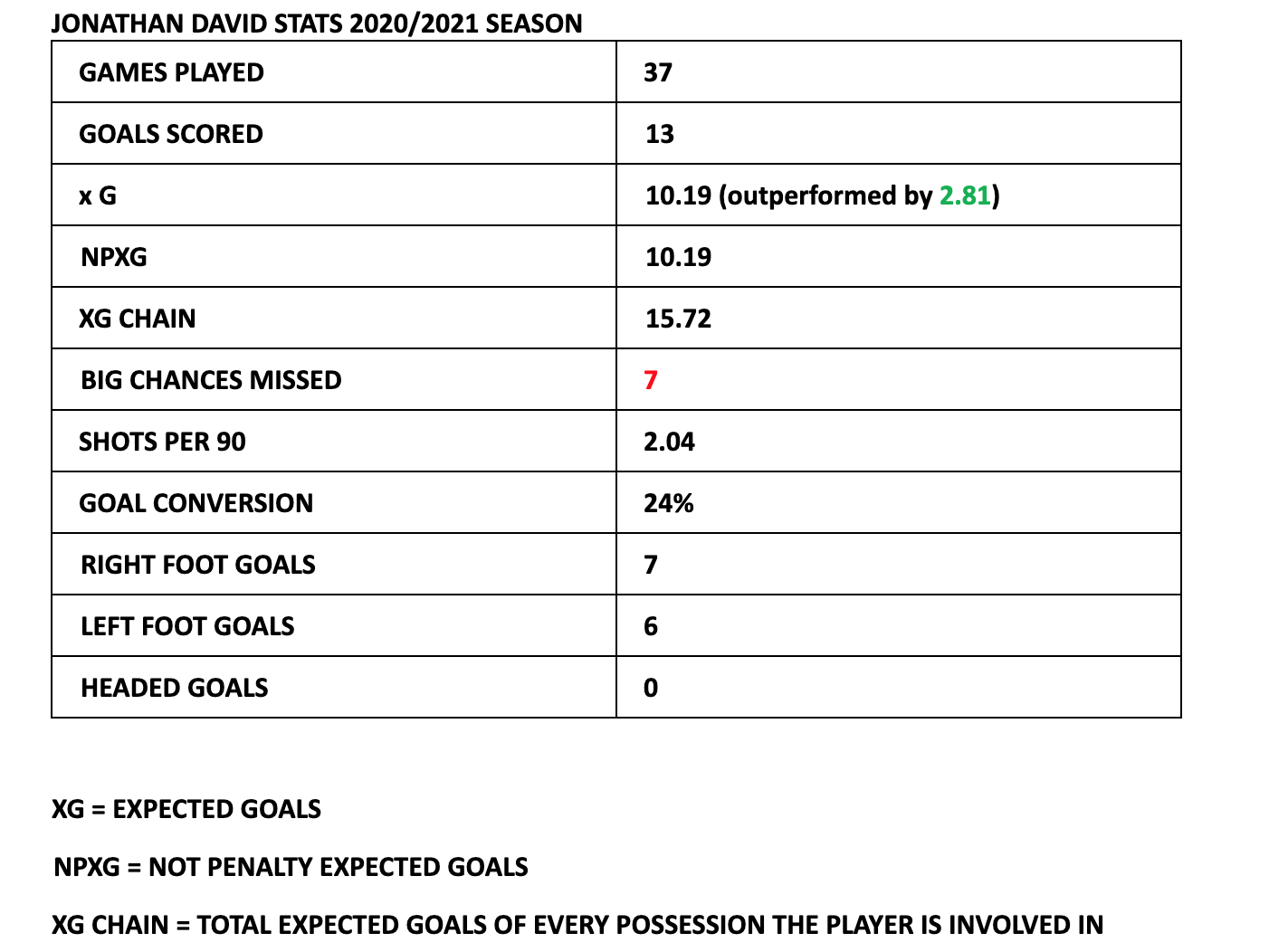 David is already showing signs of great improvement in his sophomore season as he has  scored 10 goals in 14 matches and is currently the league’s top goal scorer, ahead of the likes of Kylian Mbappé and Lionel Messi. In fact, despite Lille’s collective decline, David has already scored 12 goals in all competitions — one fewer than his entire total in 2020/21.

On the international stage, his goals have been pivotal in the CONCACAF Division of the World Cup  Qualifiers, where Canada sit in first place ahead of USA and Mexico with Jonathan David being the 3rd top goalscorer with 7 goals — only Canucks teammate Cyle Larin (11) and Salvadoran forward David Rugamas (8) have more.

The top 3 countries will qualify directly to Qatar whilst the fourth-placed team will play an inter-confederation playoff. Whilst David will surely be playing for Canada when they co-host the 2026 FIFA World Cup, there is a good chance that he leads John Herdman’s side to their first World Cup since 1986 and their second overall.

The year 2019 was a remarkable one individually for David with the Canadian National team where he finished as the CONCACAF Gold Cup’s Top Scorer with 6 goals despite Canada’s quarter final elimination to Haiti. He was the only Canadian player selected in the Team of the Tournament and was voted as the Canadian Men’s Player of the Year in 2019.

There’s plenty of time for the 21-year-old forward to improve his game and establish himself as one of the sharpshooters in world football, and he has already shown that in this current season as he has already scored 10 league goals in 14 matches, making him the league’s top scorer. Given Lille’s financial problems and the unlikelihood of heading back to the UEFA Champions League next season, it would be a shock to see him remain in Lille for the following campaign.

David is up there with the best young forwards in the game today such as Victor Osimhen, Dusan Vlahovic, Alexander Isak, and Mason Greenwood. Even though Greenwood has mostly played as a right winger this season, we will include him as center forward as that is his natural position. We have also deliberately excluded Erling Haaland and Kylian Mbappe, two world-class players who are outliers in their age group.

The numbers speak for themselves: Jonathan David is up there with the best young attackers in European football, and at 21 years of age, he’s still a few years away from entering his prime. David’s contract at Lille expires in 2025 although it is highly unlikely that he will remain at Les Dogues after this campaign; instead, he will likely end up next to Victor Osimhen and Nicolas Pepe as one of the biggest sales in club history.