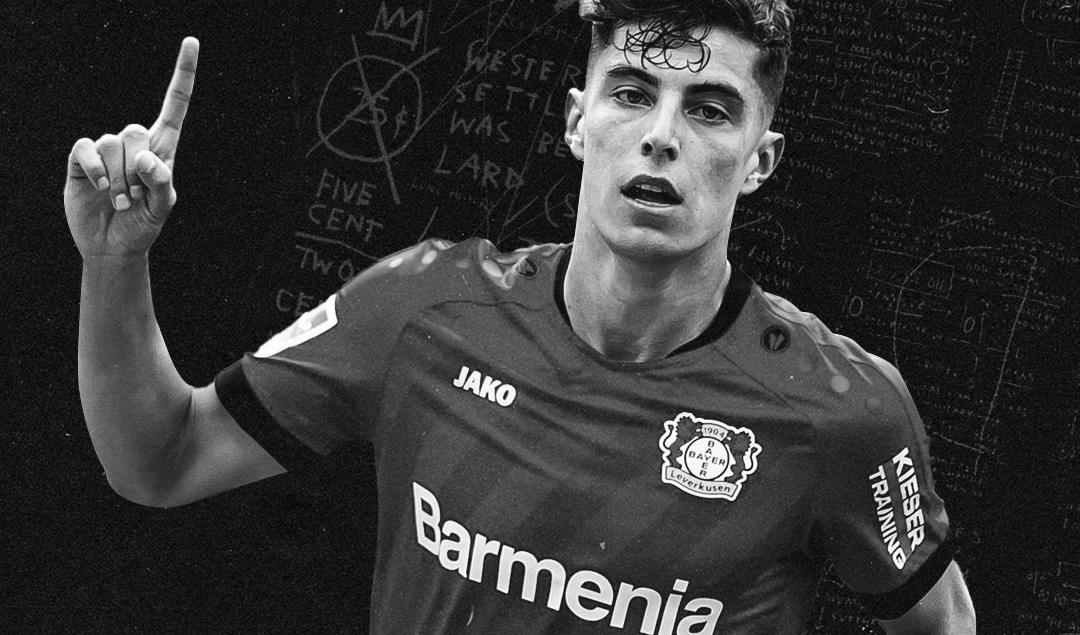 A mercurial talent, aged just 20, Kai Havertz has set the Bundesliga alight the last two seasons, scoring 20 goals in all competitions last term. He has followed that up this season, notching 15 so far.

With the skill, flair and tenacity of the talent frequently produced in South America, twinned with the typical intelligence and workman-like attitude of a typical German footballer, Havertz has attracted the attention of Europe’s biggest clubs.

Peter Bosz has found his ideal formation at Leverkusen, implementing the 3-4-3 formation in recent games. Bosz has also experimented with variations of the 3-4-3, as well as playing with a four-man defence, utilising a 4-2-3-1/4-3-3 earlier on in his reign.

In this 3-4-3 system, Havertz plays a vital role. Traditionally an attack-minded central midfielder, he has been deployed as lone-striker, in a ‘False Nine’ role, akin to that of Roberto Firmino at Liverpool. Havertz has also been asked to fulfill a wide-right role as well, but has seemed to have found his feet operating as a false nine. 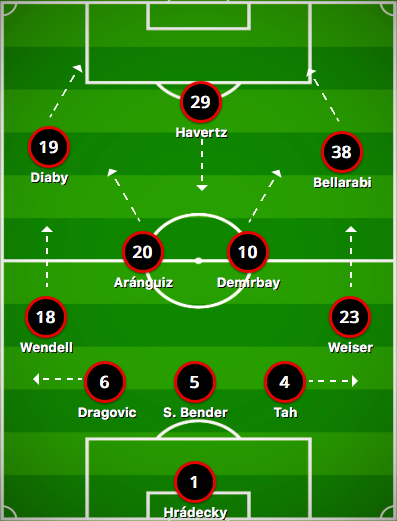 Havertz as a ‘False Nine’

Interestingly, Havertz showing deep creates a scenario where an opposition central midfielder engages him, as opposed to a ‘False Nine’ traditionally drawing out a central defender.

As a consequence, this leaves a large pocket of space between the midfield and defensive line for the wide-forwards to come narrower to exploit, with the wing-backs pushing on, with the aim of creating an overload in the attacking third. 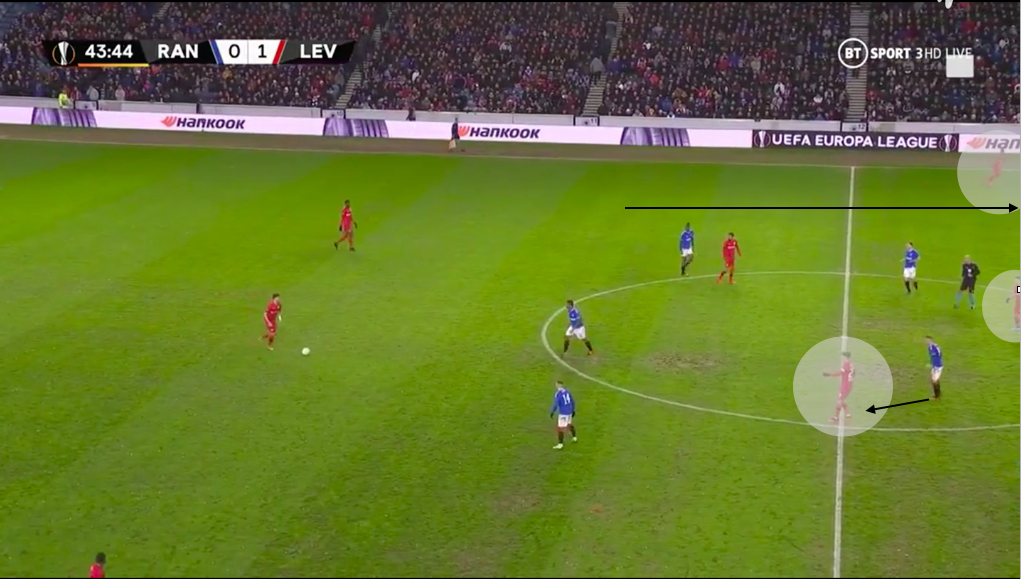 Despite being just 20 years old, Havertz displays tactical and situational intelligence way beyond his age. A lot of his game is based around creating space for others, and acknowledging when a potential overload in a certain part of the pitch is possible.

As shown below, Havertz vacates the space where a traditional number nine would operate to create an overload on the wide right. This creates space between midfield and defence for other players to penetrate.

Alternatively, as seen many times this season, he also shows the requisite skill to receive the ball and use his skill to manoeuvre past opponents into the space to create a goal-scoring opportunity. 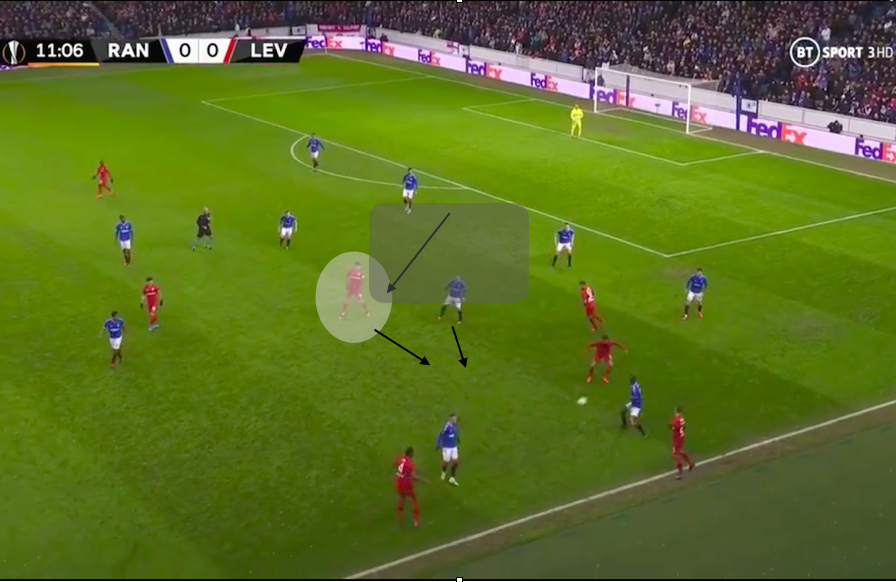 It would be unfair to just identify Havertz for his attacking prowess, as his intelligence on the pitch is also a key factor when implementing Leverkusen’s defensive organisation.

Typically, Leverkusen look to be vertically compact and seek to guide the opposition into playing passes into wider areas, where an effective zonal counter-press can be initiated. As such, Leverkusen, when not winning the ball in the attacking third, often retreat to a mid-to-low block to protect the defensive third.

Havertz plays a critical role in the defensive side of Leverkusen’s game. When out of possession, he is tasked with protecting the central areas, as shown below. He becomes the first defender and possesses the intelligence to know when to press and marshal the team up the pitch, but also when to dictate play out wide and protect the team from penetration through the centre of the pitch. 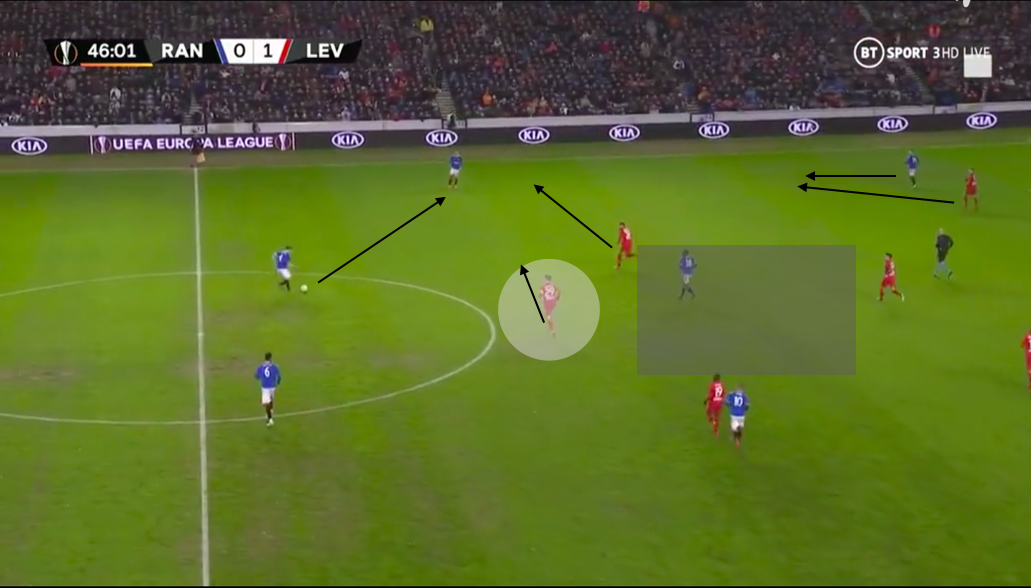 Havertz’s reputation as one of the most exciting protégés is well deserved. He displays the natural talent to warrant a place in any side in Europe, but more impressively, he has the end product to back up his vastly growing reputation, scoring 35 goals over the last two seasons and assisting 15 over the last two terms.

Bosz has started Havertz in 87% of Die Werkself’s matches this season, a team that is constantly being tweaked to fit tactical and physical requirements from specific games. They are a match made in heaven, with the Dutchman finding a position that Havertz thrives in, and one that is well suited to his skills and understanding of the game.

The German will attract plenty of attention when the transfer window opens, and with a number of clubs seemingly interested, it seems unclear at this time where his immediate future will take him. What is clear, though, is that Havertz has the potential to be a big player for both club and country in the coming years.