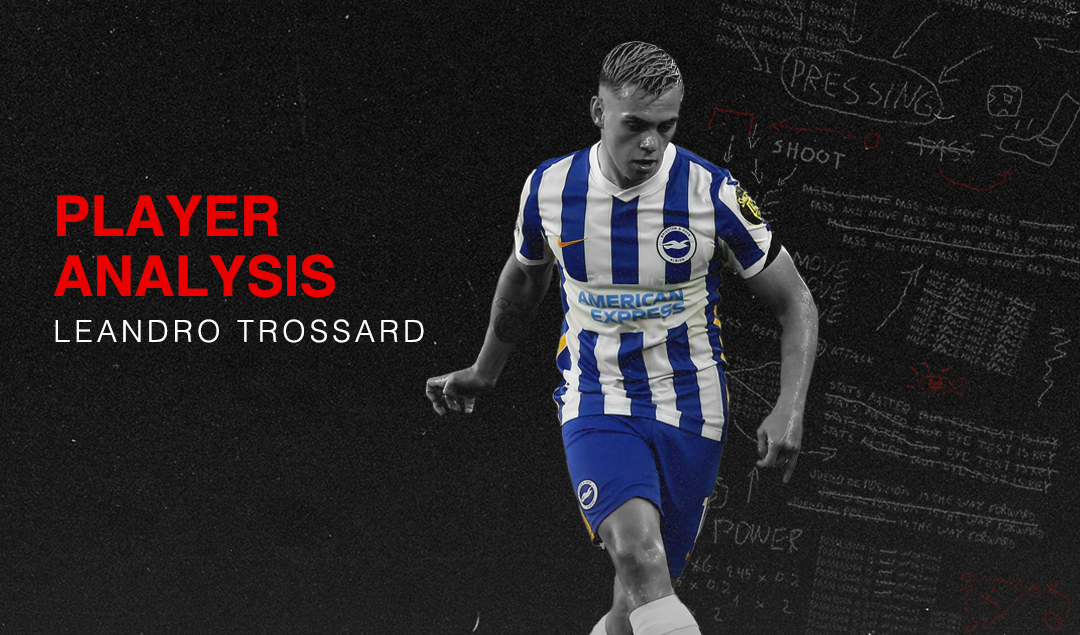 Brighton & Hove Albion have had an inconsistent first half of the season with the Seagulls winless in 12 games in all competitions after winning the first 6 of their 7 fixtures of the season.

The constant loss of important players such as Lewis Dunk (out until February), Pascal Gross, and Adam Webster have all missed large parts of the season. But a player who has been relied on all season to get Brighton out of their poor form is Leandro Trossard.

Trossard is another representation of a smart signing from Brighton with the likes of Yves Bissouma from  Lille and Robert Sánchez from Levante at a young age and then through the youth team gaining similar plaudits from football fans.

It has been a successful two and half years at Brighton for Trossard; showing his quality as a Premier League player, cementing his status in the Belgium national squad, and becoming a valuable and important player in the Brighton squad.

Leandro Trossard is a guaranteed starter in the front 3 for the Seagulls usually starting off the left but mainly occupying a more central role behind two strikers with the responsibility to offer support to the midfield and to get involved with the build-up play on the ball – a tactical change Graham Potter has made in the last couple of months with the resurgence of Danny Welbeck in going into a 3-5-2/3-4-3 shape. 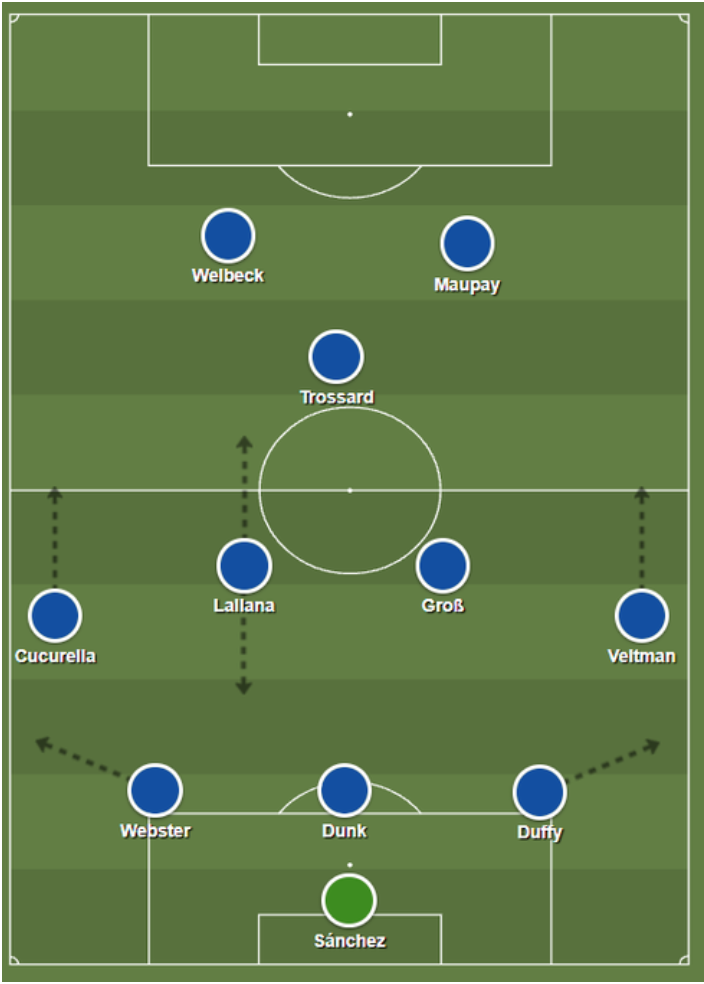 Brighton’s system is reliant on the wing-backs when it comes to ball progression and attacking transition – which encourages Trossard to drift into the wider positions if he is central. A lot of the time, he is asked to be a second runner off the ball, and get in behind the opposition defense that may be out of structure due to the movement that will be created by the two strikers.

The creative hub of Brighton is mainly centered around Trossard and that’s, not a surprise in the way he plays and the directness of his play. From central and even wider positions, he has proven to be a major threat if he is allowed too much time and space on the ball.

He establishes a passing connection with the central midfielders and the players in the wider areas. With the ball at his feet, he can either act as a decoy to create space for his teammates by garnering attention from the opposition defense or could provide and even go on to score.

Just to emphasize the passing nature of his game he ranks in the top 2% percentile among forwards for passes completed and attempted, passes into the final third and penalty area, and touches in the attacking third. 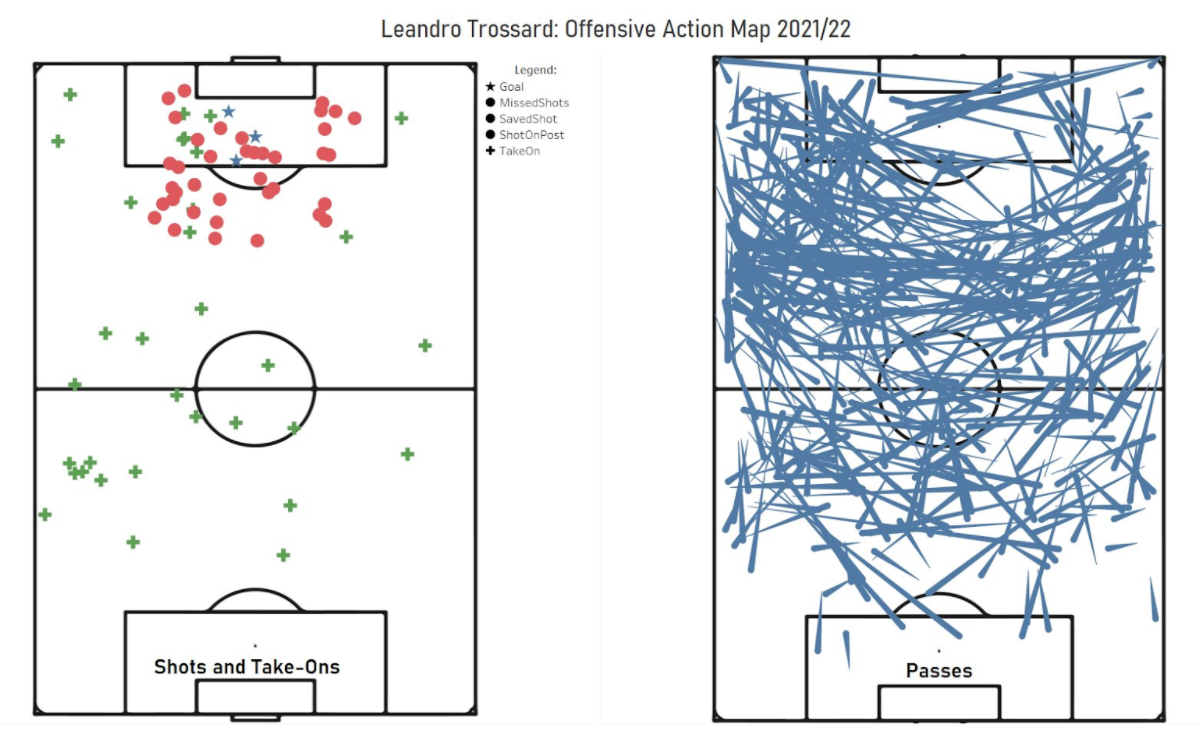 Alongside being one of Brighton’s most creative outlets, Trossard is also another player that helps Brighton progress up the pitch as well as the wing-backs in Tariq Lamptey and Marc Cucurella.

Trossard is not afraid of dropping deep to get the ball and progress the ball up the pitch. It’s not an overstatement to say he’s among some of the finest ball-carriers in Europe. That’s not just because of his capability to beat players: Trossard excels at carrying the ball over long distances.

The Belgian’s progressive carrying distance of 119.13 yards ranks him in the top 9 percentile among forwards. He averages 5.76 progressive carries per 90 by combining his close control and dribbling allows him to shift the ball quickly.

His balance combined with his quick, frequent touches of the ball also means he can efficiently change movement while carrying the ball, making him very tough for opposition defenders to stop. This is why it’s common for him to energetically run into crowded areas of the pitch — he relies on his close control to keep the ball amidst opposition challenges.

Trossard is naturally a hard-working player and this is seen in the system he plays – Brighton’s high-pressing system allows him to show off his defensive ability as an attacking player as seen in the graph below. 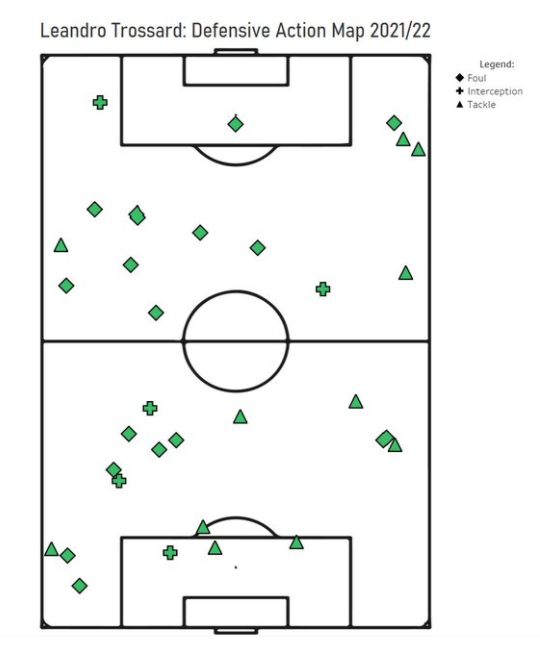 In Leandro Trossard, Brighton has an explosive, exhilarating, and influential progressive and creative presence who will continue to excite the fans in the club’s project. And playing under Graham Potter will only help him, even more, develop as a player.

He’s 27, so he’s about to enter the peak years of his career and he’s good enough (if he wants) to make the step up and play at the higher level and prolong his international career, and potentially become a more vital part of Belgium national team for years to come.