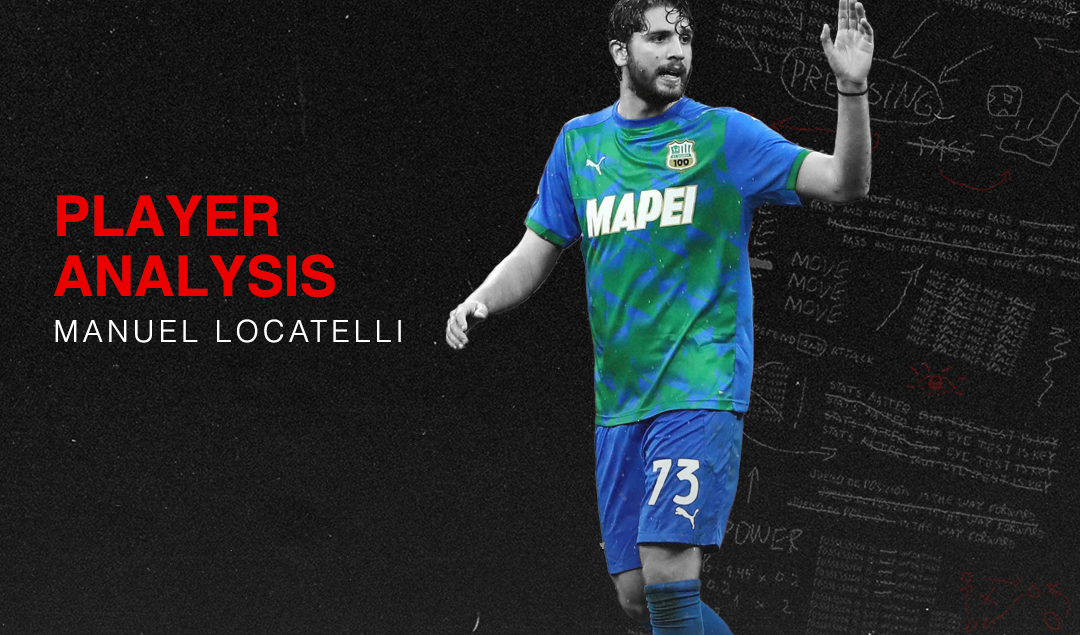 When Manuel Locatelli was promoted from the youth team at AC Milan, the midfielder seemed to be a player with maturity beyond his years. He had a spell during the 2016/17 Serie A season in which he had scored crucial goals in victories against Sassuolo and Juventus but he was able to consistently replicate those heroics. After a move to the Neroverdi in the summer of 2018, Locatelli has blossomed as a footballer. Thriving under the tutelage of Roberto De Zerbi, the 23-year-old is one of the best deep-lying playmakers in Italian football and he has also established himself as an international player for Italy.

Born in Lecco, situated about 50 kilometers from Milan, Locatelli rose through the youth ranks at AC Milan and he was given his senior debut in the 2015/16 Serie A season by interim coach Cristian Brocchi. After featuring twice in the league in that campaign, he played 25 times in the league under new coach Vincenzo Montella in 2016/17. His two outstanding performances were in the matches in which he scored. The Rossoneri were 3-1 down against Sassuolo, the midfielder came on as a substitute for Riccardo Montolivo, and he scored the equalizer with a stunning left-foot volley before they went on to win 4-3.

Two games later, AC Milan hosted Juventus, and the Diavolo struggled to break down the Bianconeri defense, but in the 65th minute, Locatelli scored the only goal of the match. Suso had the ball at the right corner and passed the ball backwards to the young midfielder. Locatelli controlled the ball with his first touch and then beat Gianluigi Buffon in the Juve goal with a thunderous angled drive.

Scoring against such high-quality opponents perhaps overwhelmed the AC Milan midfielder and he did not reach the same heights. Aside from his confidence, one of the flaws in his game was that he would pass sideways and backwards too often, and not make enough vertical balls. Locatelli only featured 21 times during the 2017/18 Serie A campaign and then he was sent on loan to Sassuolo for the following season.

The Neroverdi had hired a new coach for the campaign called Roberto De Zerbi, who had been in charge of Benevento, and the Serie A debutants were relegated after just one season. His work with the Stregoni was still impressive as he had given the team a clear attacking identity despite containing a lot of players who were not Serie A standard. Since De Zerbi has been in charge of the club from the Emilia-Romagna region, he has used the 3-4-3, 4-3-3, and 4-2-3-1 formations. Regardless of the formation, he has made Locatelli one of the mainstays of his midfield and the former AC Milan youth player has benefitted from it.

In the 2018/19 season, Locatelli scored twice and provided four assists in 29 Serie A matches, prompting Sassuolo to acquire the midfielder from the Milanese giants for €13.5 million. He then went scoreless in 2019/20 but provided five assists in 33 league matches, and he has played 33 times so far in 2020/21, scoring four times and supplying two assists. According to WhoScored, the 23-year-old has averaged 80.3 passes per game, five long balls per game, and he has a passing success rate of 88.3 percent in Serie A this season.

His best performance statistically surprisingly came in Sassuolo’s 3-1 defeat to Juventus in Week 36, where he made 116 passes and his passing rate was at 94.8 percent. In the next league game, he produced a season-high 12 long balls and scored in a 3-1 victory against Parma. From being a player lacking in confidence, Locatelli has developed into a key midfielder at Sassuolo and his progress has made it easier for De Zerbi to phase club stalwart Francesco Magnanelli out of the midfield.

The 23-year-old is a footballer that can make wise decisions on the ball, pass vertically and diagonally instead of just going either lateral or horizontal, and he is a capable ball-winner as well. He has averaged 2.3 tackles, 1.6 clearances, and 0.5 blocks throughout the 2020/21 Serie A season. Locatelli has also represented Italy at various youth levels, which included 23 appearances with the Under-21 team, and he has played nine times for the senior squad under Roberto Mancini, making his debut in a 1-0 victory against The Netherlands in September 2020.

Some of Locatelli’s best qualities were well-highlighted when Italy defeated Bosnia and Herzegovina 2-0 in a UEFA Nations League A match in November 2020. The midfielder was involved in both goals in Sarajevo, demonstrating his ability to win the ball back as well as pick the right pass. 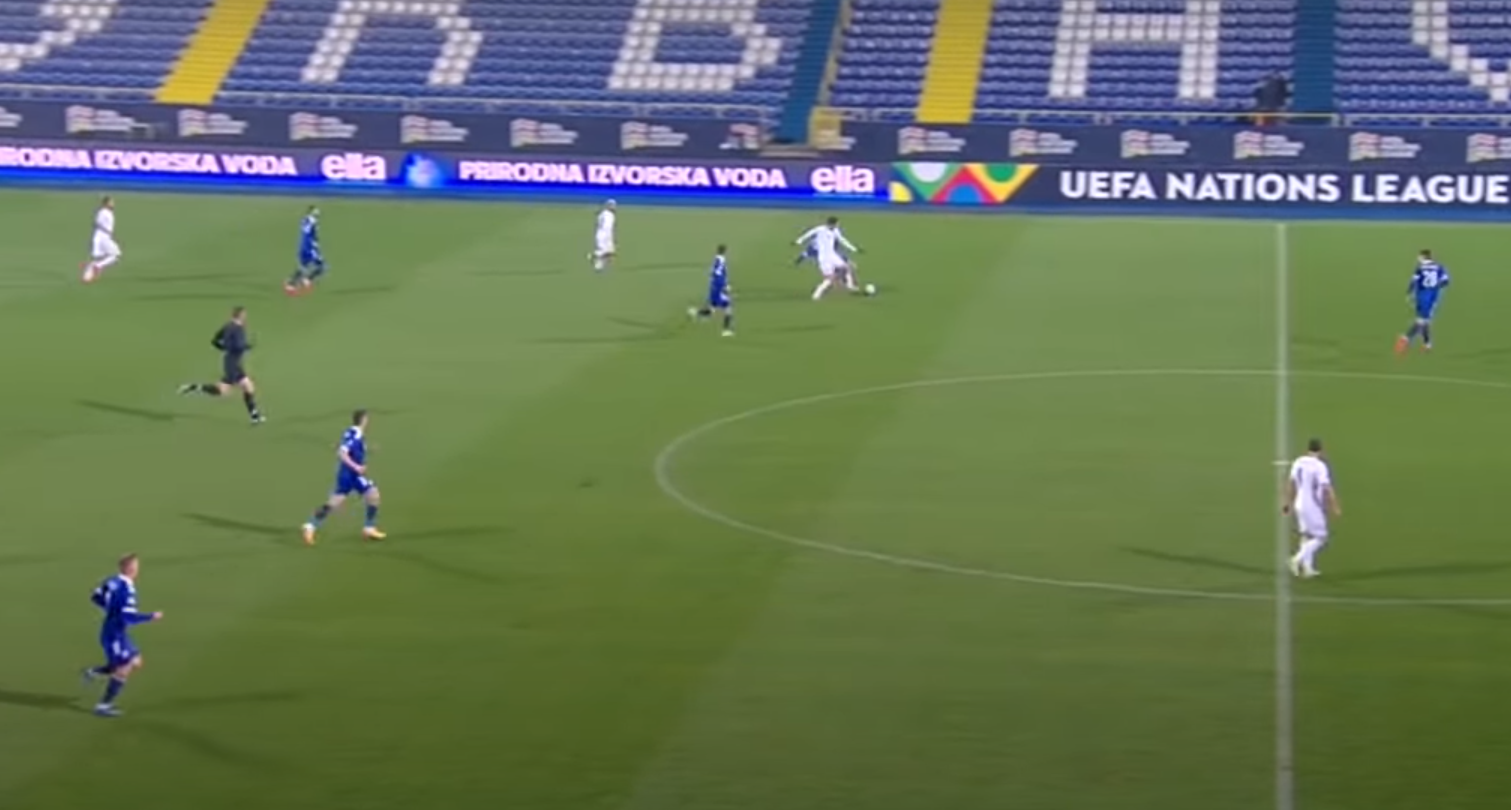 In the first photo, he is seen winning the ball back off one of the Bosnian players. He has beaten his opponent in the chase and managed to get in front of him. Locatelli gets in a tangle and loses his balance but he is still able to pass the ball into space.

Behind the Italian midfielder is Azzurri left-winger Lorenzo Insigne, who notices the one-on-one battle that his teammate is in. He then decides to make his run from deep and he sprints into the space where Locatelli passes the ball. 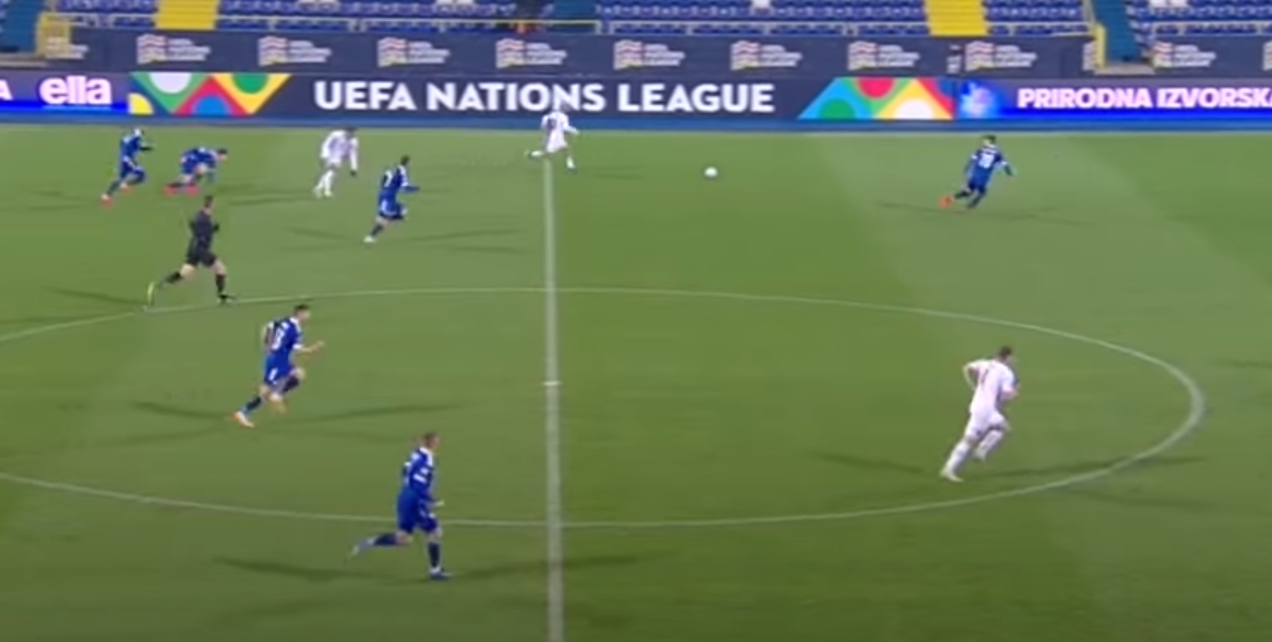 By the time that Locatelli has gotten back onto his feet, Insigne has run into the space to collect the ball, and their opponents were not quick enough as well as too far away to press the Italian winger. Insigne then crosses the ball into the box for Andrea Belotti to stretch out his right leg and divert the ball into the net.

For the second goal, Locatelli passes the ball to Emerson Palmieri on the left-wing, and the Brazilian-born defender passes it back to the Sassuolo midfielder, who remains unmarked. Locatelli notices the run of club teammate Domenico Berardi, who is making a diagonal run and is looking to break the offside trap. 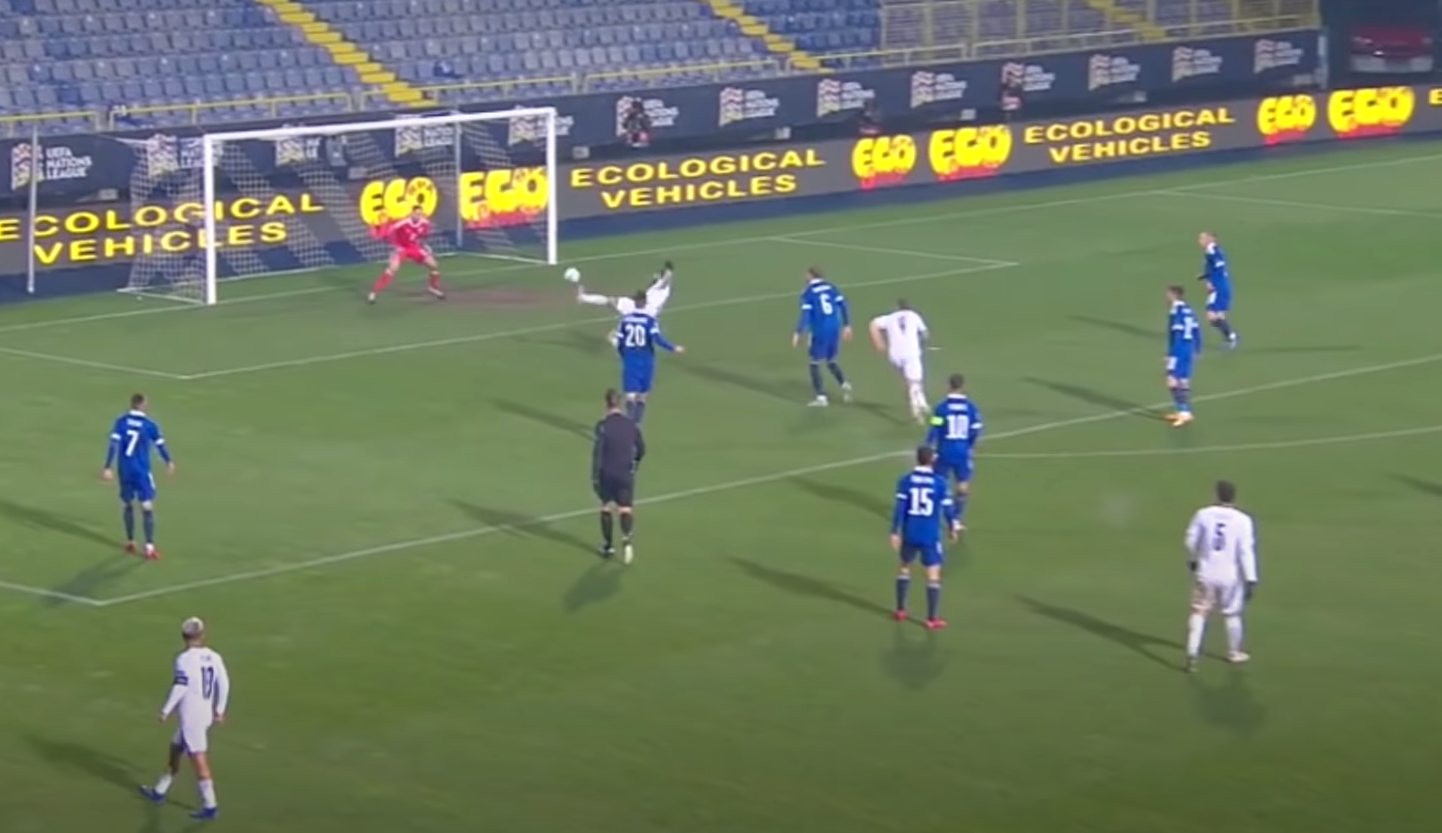 Locatelli then lobs the ball over the Bosnian defense while Berardi continues running, and as the ball drops, the right-winger turns clockwise and volleys it into the net. The central midfielder has maintained his impressive form for his country in 2021 and he scored his first goal for Italy in March in a 2-0 victory away to Bulgaria in a qualifier for the 2022 World Cup. He had come on as a substitute for Stefano Sensi in the 68th minute and he scored his country’s second goal eight minutes from time.

Marco Verratti was holding off a defender when he had the ball in the area and he then back-heeled the ball into the path of Lorenzo Insigne. The Napoli winger ran to the ball, drew some of the Bulgarian defenders out, and turned backwards.

Insigne quickly noticed that Locatelli was unmarked just outside of the box. Instead of passing the ball to Verratti, who was closer, the Italian winger passed to the Sassuolo midfielder instead.  Locatelli had made the run into the box and had time as well as space to control the ball. With Bulgarian defenders coming to press him, the central midfielder curls the ball around three opponents and beats Bulgaria goalkeeper Plamen Iliev at the far post.

With Marco Verratti a doubt for the European Championship due to a knee ligament injury, the 23-year-old might take on a greater role for his country than first expected. Despite playing for a provincial club like Sassuolo, he has the potential to reach another level. After spending years with the Neroverdi improving his game and gaining valuable match experience, Locatelli will have a great platform to showcase his talents in June.