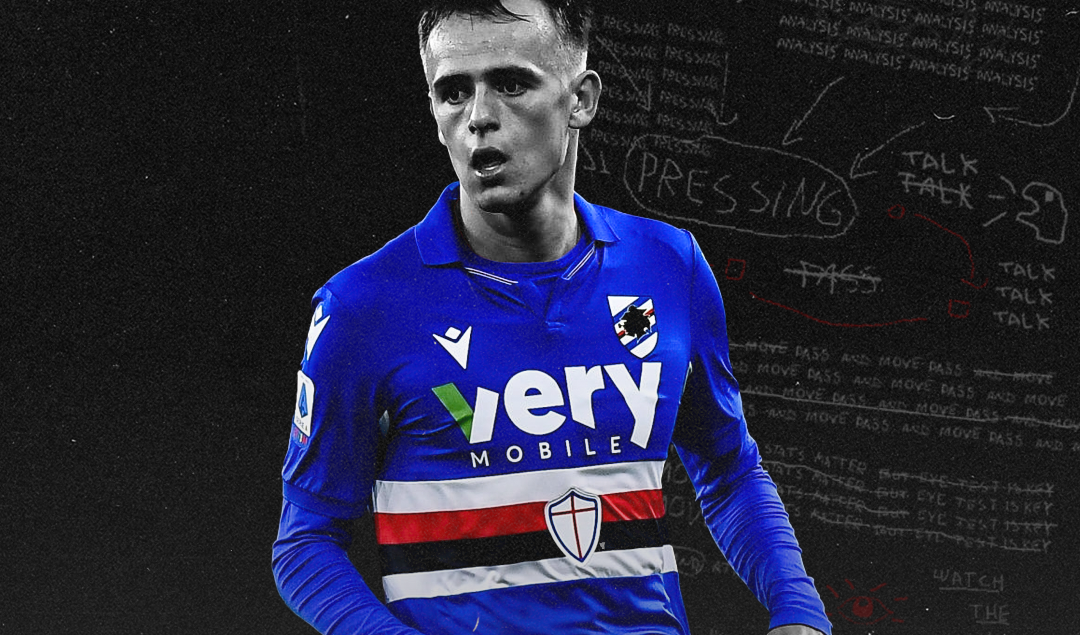 When Danish international Christian Eriksen joined Inter in January 2020, his unveiling by the club was a glamourous one. He was presented at La Scala, the premier opera house in Milan, and wore a stylish black suit, which was quite fitting considering the city’s status in the fashion world. Unfortunately for the former Tottenham Hotspur midfielder, he has had a terrible time in Italy. He has not been able to produce the type of form that he had at Spurs and his inability to adapt to the tactics of Nerazzurri coach Antonio Conte does not help.

Meanwhile, one of his younger compatriots is starting to emerge in Serie A. Mikkel Damsgaard was purchased from Nordsjaelland for around €6.5 million in February 2020 and he has shown plenty of potential since he was permitted to join in July. So far in the 2020/21 Serie A season, the 20-year-old has scored twice and provided three assists in 17 matches, but the start of his time in Liguria should not be heavily defined by stats.

Naturally a left winger, he has quickly adapted to the tactics of experienced coach Claudio Ranieri, often playing as a left midfielder in the 4-4-2 formation. In a Doriani squad consisting of bright youngsters and seasoned veterans, Damsgaard has been one of the standouts in the former category. The Danish starlet had impressed at Nordsjaelland for three seasons, which drew the attention of Sampdoria. In 93 competitive matches for the Tigrene, he scored 13 times and provided 21 assists.

It was his form in the 2019/20 Danish Superligaen that really captured the eye. Damsgaard scored nine goals and provided four assists in 25 matches, predominantly as a left-winger in a trident attack. With the likes of Antonio Candreva and Keita Baldé Diao arriving on loan deals, the purchase of the Dane was their most expensive one in the summer, and he has displayed the qualities of a player who should increase in market value.

Ranieri’s implementation of wing-play tactics has really been beneficial for the wide players. Left-back Tommaso Augello has been in superb form while Candreva and Jakub Jankto have impressed in the wide positions. However, despite the performances of Candreva and Jankto, ‘The Tinkerman’ still makes room for and sufficient use of Damsgaard.

The 20-year-old made his competitive debut for the Blucerchiati in their 3-0 defeat to Juventus in the opening round of the 2020/21 Serie A season but he did not feature in their next game against Benevento. Ranieri decided to start him in the Week 3 victory against Fiorentina and featured for 69 minutes. Damsgaard was relegated to the bench for the match against Lazio but he made an impact when he came onto the pitch. Il Doria earned a 3-0 victory against the Biancocelesti and the Danish starlet scored his first Serie A goal.

Veteran striker Fabio Quagliarella had a shot saved by Aquile goalkeeper Thomas Strakosha but Patric failed to clear the ball away and he was dispossessed by Doriani midfielder Valerio Verre. As Verre was retrieving the ball, Damsgaard made a rapid diagonal run from the left-wing into the penalty area. After the attacking midfielder released the ball, the Dane jumped past two opponents, and then kicked the ball onto the crossbar and into the net. 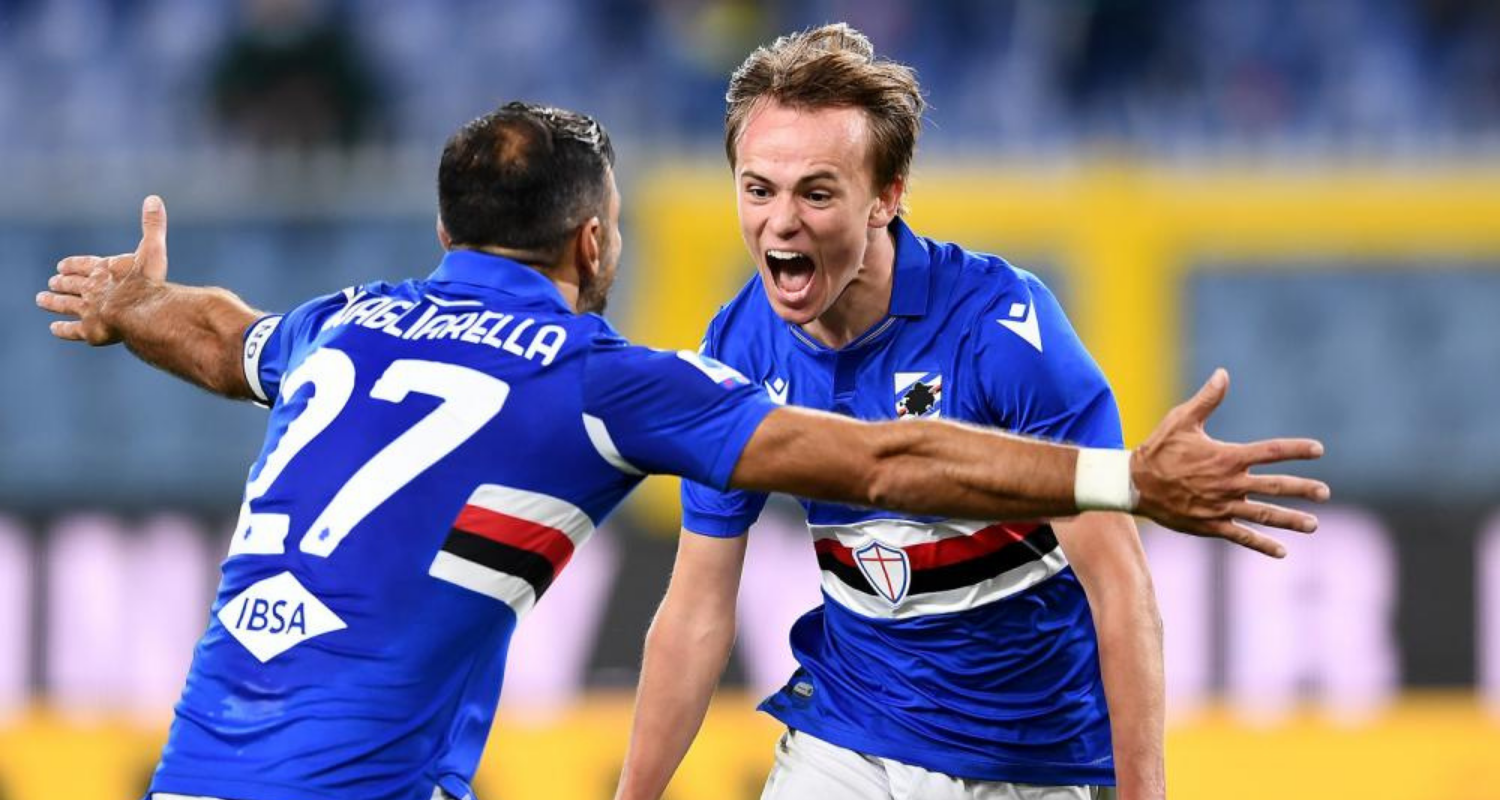 For the next league match against Atalanta, the 20-year-old was granted another chance to start for Sampdoria, and he assisted in the first goal in Il Doria’s 3-1 victory. Damsgaard started the move as the Genoese side went on the counter-attack. He played a one-two with a teammate and sprinted down the middle, then played a through-ball for Quagliarella, who scored with an angled left-foot drive.

Damsgaard would remain a regular feature in the Samp side, but his next goal involvement was in the 2-1 defeat to AC Milan in Week 10, when he supplied the assist for Albin Ekdal from a corner. Sampdoria earned a 3-1 victory against Crotone in Round 13 in which the Danish winger scored his second Serie A goal. It was a finish typical of a poacher than a winger, as Jankto provided a low cross from the left-wing and the Dane ran in to slide the ball into the net.

Three matches later, Sampdoria earned a surprise 2-1 victory against Inter. Damsgaard provided a superb assist for Keita Baldé to score the second goal of the match, a delightful effort in which he demonstrated a fine blend of technique and persistence.

Just inside the opposition half, Morten Thorsby passed the ball to the Dane, who had his back facing the goal. With a 270-degree turn, he beat one Inter defender, surged towards the goal, and then beat two defenders after knocking the ball into space. He managed to regain control of the ball and crossed low from the right to Baldé, who timed his run to perfection.

Moments like that evidently show that Damsgaard is a player with maturity beyond his years. He has also played as a right midfielder and an attacking midfielder, demonstrating his versatility, and he is very comfortable on the ball. Ranieri’s approach is predominantly a pragmatic one but players like the Dane add a healthy dose of attacking flair.

His performances have certainly impressed those at the Ligurian club and sporting director Carlo Osti recently sung his praises.

“Damsgaard has done very well to settle in Italy and in Italian football,” Osti told DAZN. “He is alert and learns easily. I think his position on the field is being defined, he has played excellent games, but also as an attacking midfielder and behind the strikers, so he can play anywhere up front.”

Damsgaard is contracted until June 2024 but Sampdoria are known to be a selling club so a talent like the Danish winger will probably be elsewhere by then. He also earned his first senior cap for Denmark in November 2020 and has the ability to earn several more caps.

In the meantime, Blucerchiati fans can enjoy watching this young gem dazzle on the wings, supply some delightful assists, and discover ways to get into scoring positions.