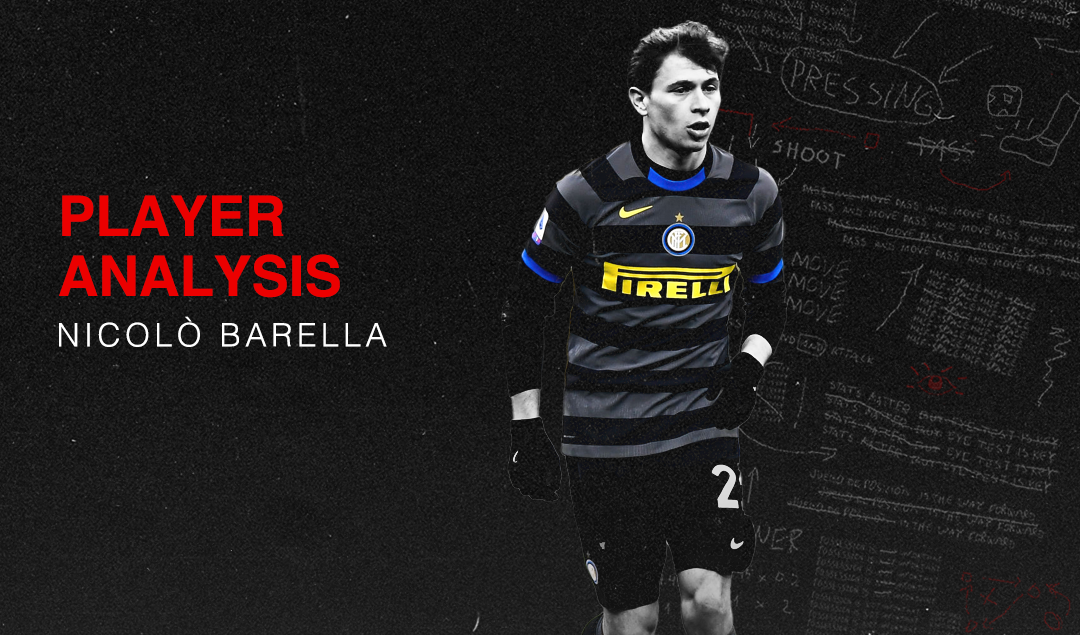 “The lads are giving me their soul, but in games like this, our limits emerge. You need experience, and who do I ask? Sensi taken from Sassuolo or Barella taken from Cagliari? Maximum respect for them, but unfortunately they lack it.”

That was the blunt assessment made by Inter coach Antonio Conte in November 2019 when the Nerazzurri squandered a 2-0 lead and lost 3-2 away to Borussia Dortmund in the group stage of UEFA Champions League. The Italian giants were indeed lacking in players with experience in big European matches but the former Juventus and Chelsea tactician singled out young Italian midfielders Stefano Sensi and Nicolò Barella as well as the provincial clubs that they were purchased from.

Although Sensi has struggled with injuries since arriving from the Neroverdi, Barella has developed into one of Inter’s best players since arriving from the Isolani in the summer of 2019. In his second season, he has built upon that form and become arguably its standout midfielder. During the first half of the 2020/21 Serie A season or the “andata” as it is known in Italy, the 23-year-old played in all 19 matches, scored twice, and provided six assists.

Barella operates as a box-to-box midfielder in Conte’s 3-5-2 formation. More specifically, he operates in the right central midfield role or as a mezzala destra as it is known in Italy. As the heat map indicates, the diminutive Sardinian is often positioned on the right side of the pitch. He is known for his strength and stamina but the 23-year-old is also a fine technician with tidy skills on the ball.

With either Achraf Hakimi or Matteo Darmian operating as the right wing-back, Barella would be expected to drop back whenever possible. However, the heat map suggests that the Italian midfielder is capable of providing options in the attacking phase of the game. Barella is one of the most complete midfielders in the Inter squad and he has been very important in the construction of attacking plays in the first half of the 2020/21 Serie A season. 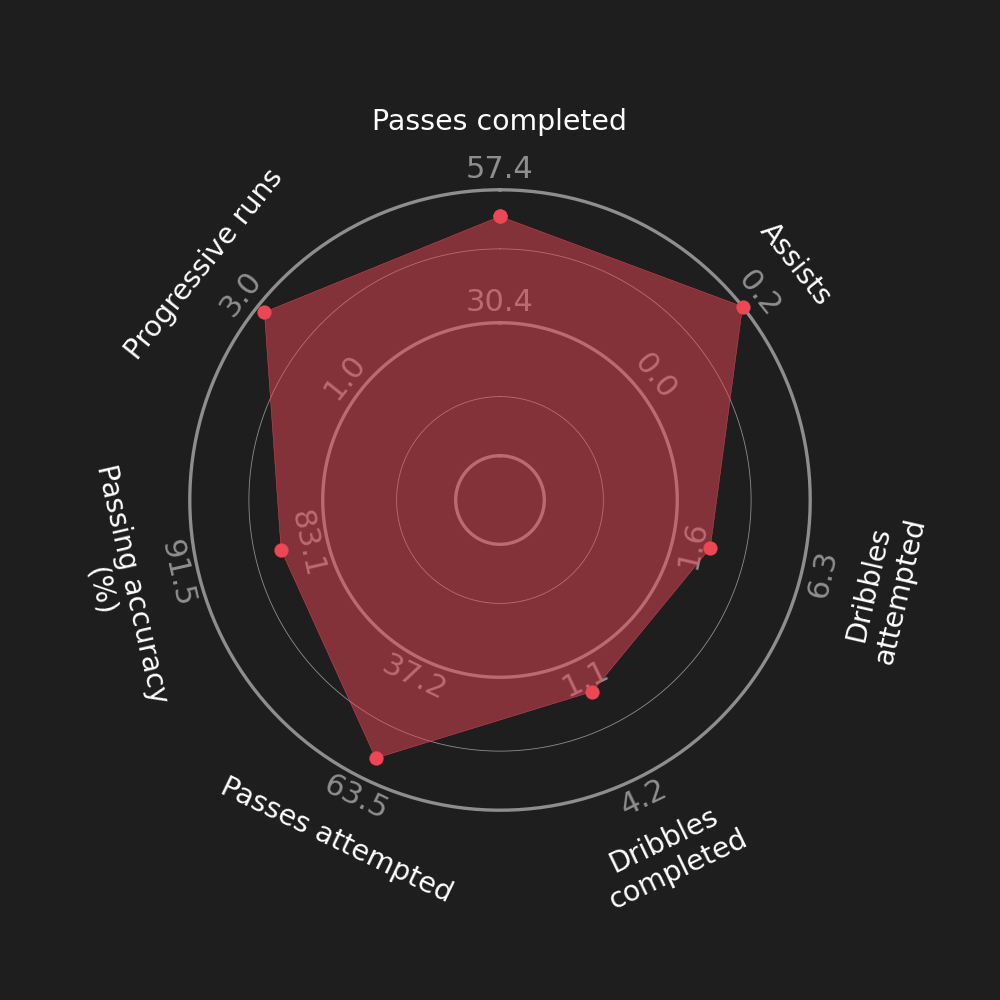 The Sardinian’s six assists are the most by a Nerazzurri player for the season so far, with Marcelo Brozović coming second with five. In terms of passing, Barella has completed 796 out of 927 passes, resulting in 85.87 percent passing accuracy, and he has completed 45.81 passes out of 53.34 per 90. Only four more teammates have succeeded in completing more passes, with center-back Alessandro Bastoni completing the most with 983.

Dribbling is a skill of Barella’s that deserves more praise. The 23-year-old has completed 26 out of 39 dribbles, which is fifth overall and the most for someone who is not a striker or a wing-back in Conte’s system. On average, 1.5 out of 2.24 dribbles per 90. He has made 44 progressive runs so far, which is more than any of his teammates and illustrates his ability to be a ball-carrier in the Biscione midfield.

In the defensive phase, Barella has made an impact all over the pitch, but it is on the right side where he has had the most influence just like when Inter attacks. The 23-year-old is fifth in defensive actions for Inter by completing 123 out of 180, sixth for interceptions with 56, and second to Alessandro Bastoni for defensive duels won with 10. Unfortunately, he is the first for fouls committed with 32 and equal first for yellow cards with Brozović and Bastoni with four. 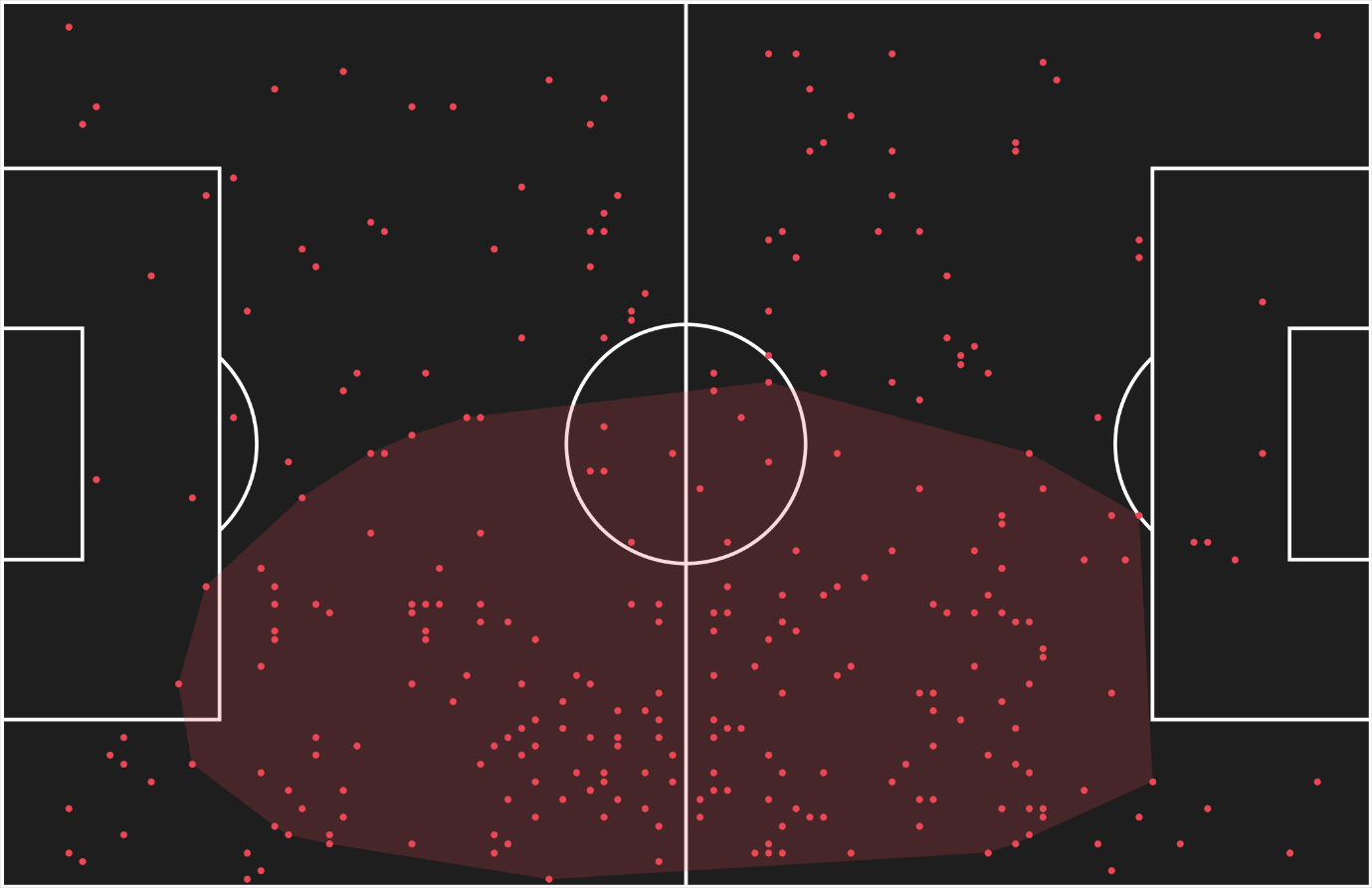 If we assess his stats per 90, Barella falls down the rankings and he does not make the Top 10 in a few categories. That being said, he has played 1,564 minutes in the first half of the Serie A campaign, more minutes than any of his outfield teammates, and he is a midfielder that is involved in both phases of the game. While the likes of Roberto Gagliardini and Arturo Vidal have more defensive tasks and Brozović operating in the regista role, Barella has made more of an impact going forward.

Conte had been critical of Inter’s lack of big-game experience after that defeat to Borussia Dortmund in the 2019/20 UEFA Champions League and the club had dropped into the Europa League after finishing third in Group F. The Nerazzurri fared much better in Europe’s second competition, progressing to the final which they lost 3-2 to Spanish side Sevilla. Barella was one of the best performers in their run to the final, scoring in the 2-1 quarter-final victory against Bayer Leverkusen, and was also named in the Europa League Team of the Season by UEFA.

In 2020/21, his greatest impact in a big game came in Week 18 of the Serie A campaign when Inter hosted Juventus. The 23-year-old dominated the midfield and was involved in both goals, providing the cross for Vidal to open the scoring and then ran onto a Bastoni through-ball to double the Biscione’s lead. In the Coppa Italia quarter-finals, Inter came back against city rivals AC Milan to secure a 2-1 victory, and Barella had an influence on the game, earning the penalty which allowed Romelu Lukaku to level the score.

Italy coach Roberto Mancini has made Barella a key part of his Azzurri squad, even when the diminutive midfielder was still at Cagliari. Playing at one of Serie A’s giants has given the 23-year-old valuable experience, and he has been one of the Azzurri’s best performers as they have qualified for Euro 2020 and finished on top of their group in the 2020/21 UEFA Nations League.

Conte has often lamented the lack of experience in his Inter squad since taking over in the summer of 2019 and thrown countless tantrums due to the club supposedly not signing the players he wants. Despite an abundance of experienced foreign players arriving in the summer of 2020, it is one of the Italian youngsters that has truly stood out in his Nerazzurri squad.

Nicolò Barella as a footballer is a complete package and has shown that he has more than enough talent to atone for a perceived lack of experience. Inter and Italy can be thankful that they have such a dynamic midfield at their disposal.