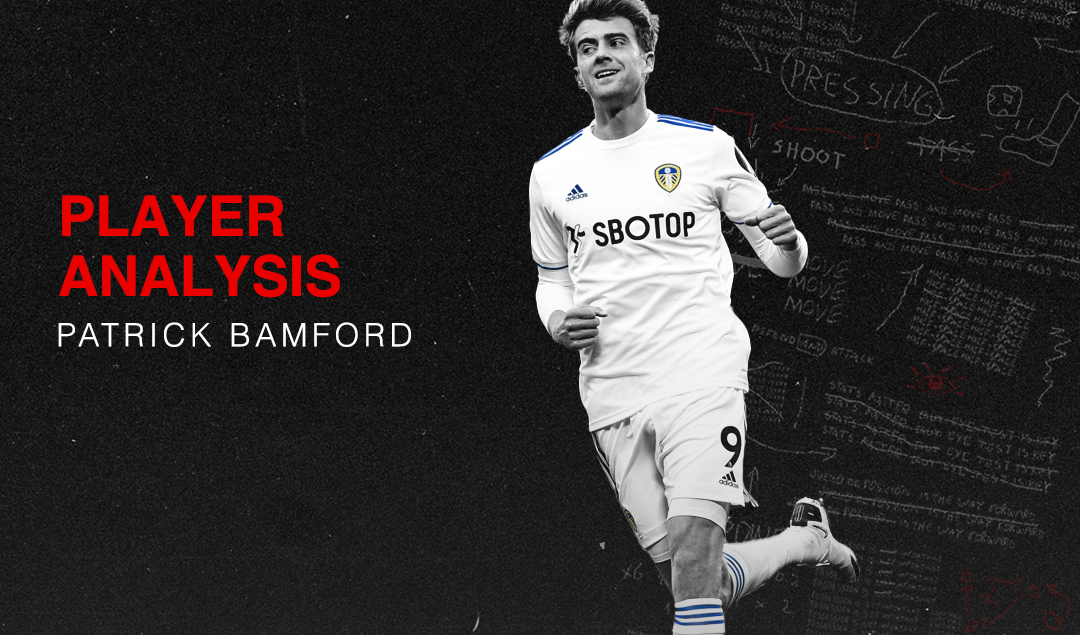 Bolstered by the unshakable trust of Marcelo Bielsa, Patrick Bamford has come into his own in the Premier League this season since Leeds’ return to the top-flight last summer. A player who has previously proved erratic, a culmination of finishing maturity and refining his role in a highly functional attacking unit has seen Bamford catch the eye of the general public- and the analytics community.

Investigating Bamford’s numbers is a good place to analyse the sustainability of his performance as a starter at the top level. He is receiving a high volume of chances per 90, in dangerous positions (Leeds are one of the top teams at penetrating the penalty box), thus accumulating high levels of expected goals (xG) per 90. His xA is reasonable too, helping to provide substance to the notion that he is performing sustainably at this level (see the y-axis on the visualisation below). 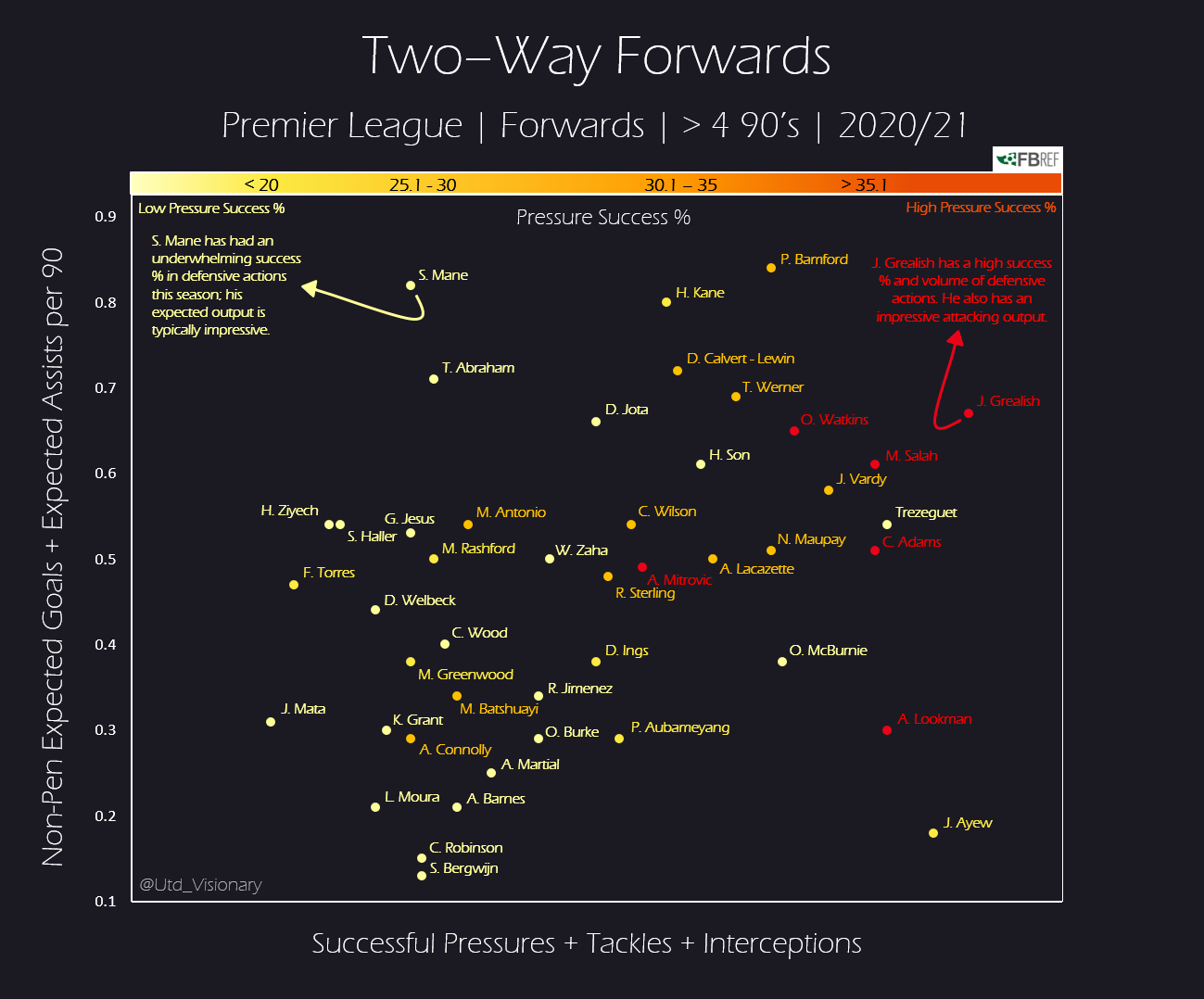 Reasons for this include the aforementioned (that Leeds are a potent attacking unit who produce good chances in and around the box), but others include the variables that Bamford can affect himself (movement, choice of runs, positioning) and his role.

Bamford’s role for Leeds is what could colloquially be described as cushy. In other words, he largely plays between the goalposts, high up the pitch. While he does drop to create and provide decoy runs and vertical movement to complement his teammates, he primarily sits on the last line looking to run in behind in transition and 2nd phase possession or to be in a position to make runs across his defender when the ball approaches the box. Bamford’s heatmap helps to provide evidence for this observation. 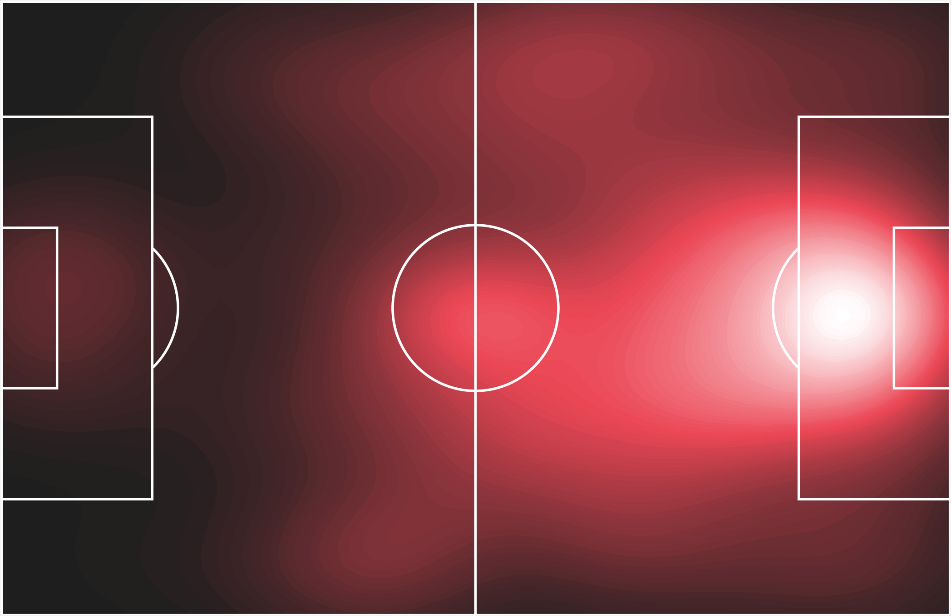 In the knowledge of Bamford’s role and subsequent positioning, we can view his shot map through a more contextualised lens. While Dominic Calvert-Lewin is Everton’s primary target man, and Anthony Martial, Roberto Firmino and Harry Kane are most frequently seen heavily involved in build-up, Bamford primarily has one job: to get in positions to finish good chances.

Leeds balance this by playing Rodrigo Moreno deeper between the lines, Jack Harrison wide to produce said chances and Rahpinha wide to add some deep/wide progression and 1v1 impetus. The club’s shot-assisted map shows how they create a plethora of good chances for Bamford to finish. 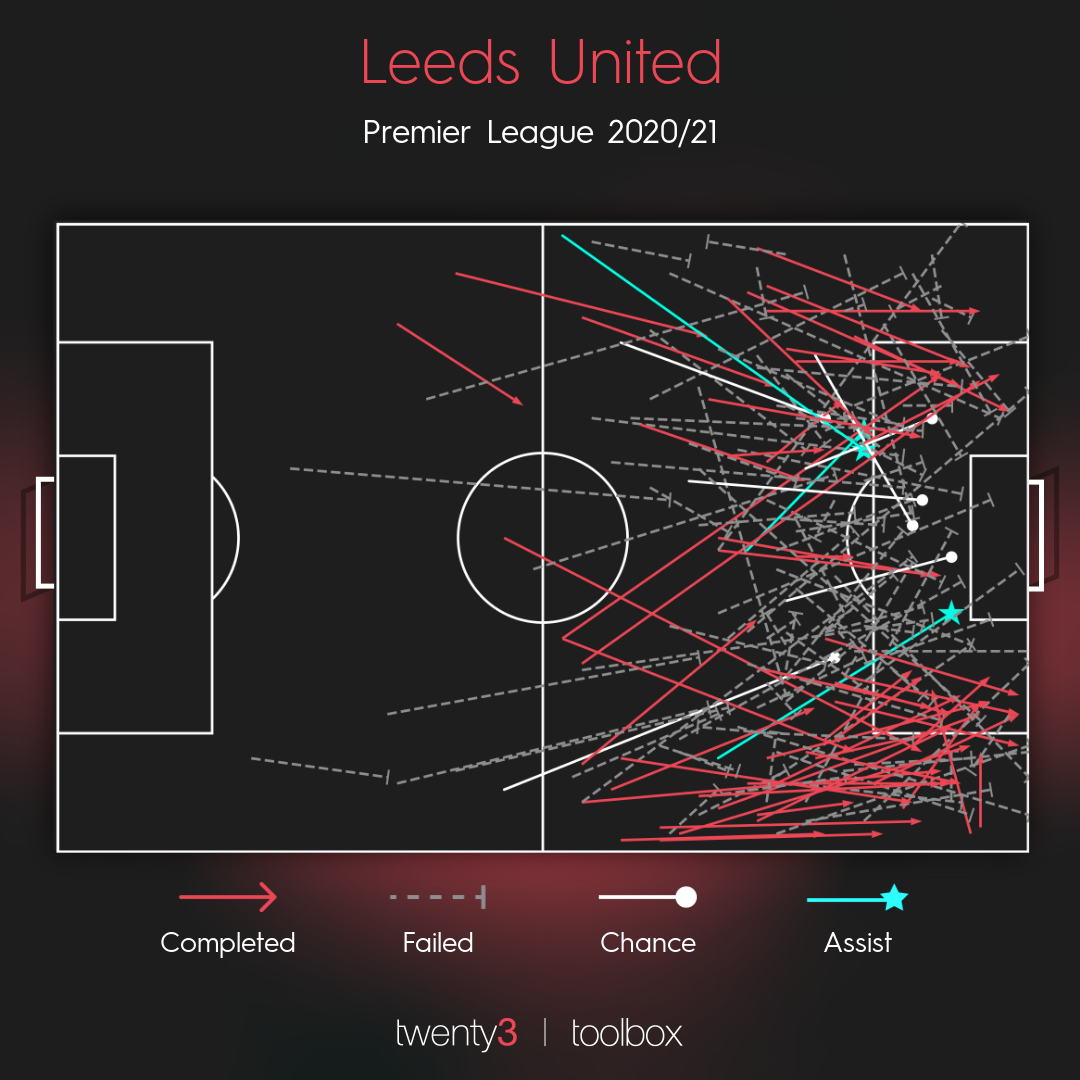 Bamford’s xG shot map shows how Bamford gets into positions to finish these chances and he does so extremely well. What we can see, is that his shot locations are highly refined; he only shoots from central areas, fairly close to goal. This goes some way to explain why Bamford racks up such a high xG per 90 from relatively few shots. 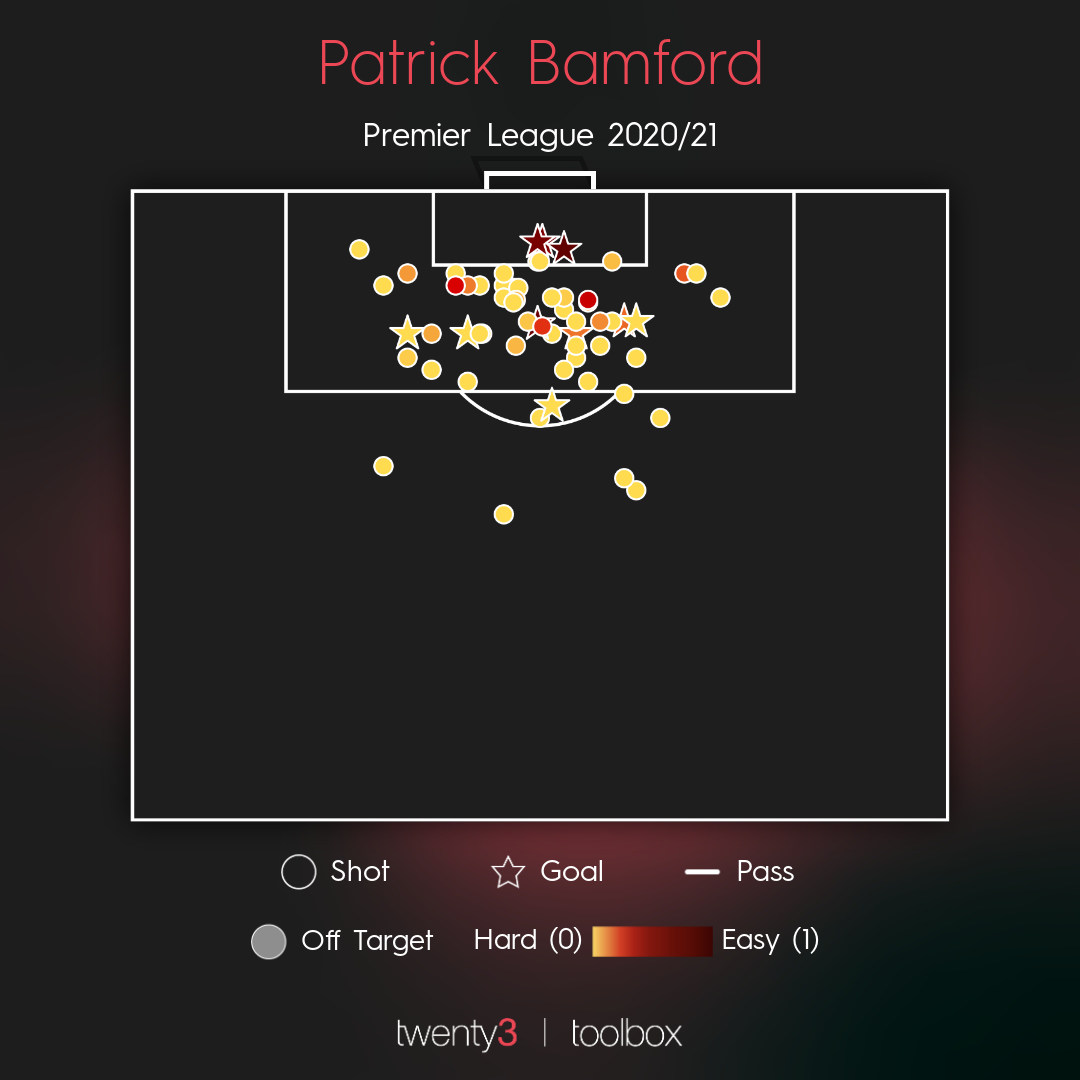 This information leads smoothly into the next topical question: how does Bamford get these chances? Other players are tasked with merely scoring, finishing off team moves. The primary answer here is movement; the timing and choice of runs made by Bamford.

Bamford has a wide variety of runs in his repertoire. He is very good at timing the ‘‘feint away then dart across’’ the defender. This gets him near post opportunities from balls into the box. Bamford is also very good at holding a position anchored between centrebacks. This means that he is well stationed to finish any pinpoint passes/crosses into his path.

The English striker’s speed of thought is also very good, from what can be observed. This primes him for rebounds when Leeds have entered the box. Finally, Bamford is a threat in behind; he times curved runs in behind defenders well and is often found on the last shoulder when Leeds are looking for longer passes in transition against high lines.

Bamford’s mean movements are portrayed below, although this must be contextualised by in-game observations. His movement in behind best shown by his goal at Stamford Bridge or the penalty he won against Burnley in late December. 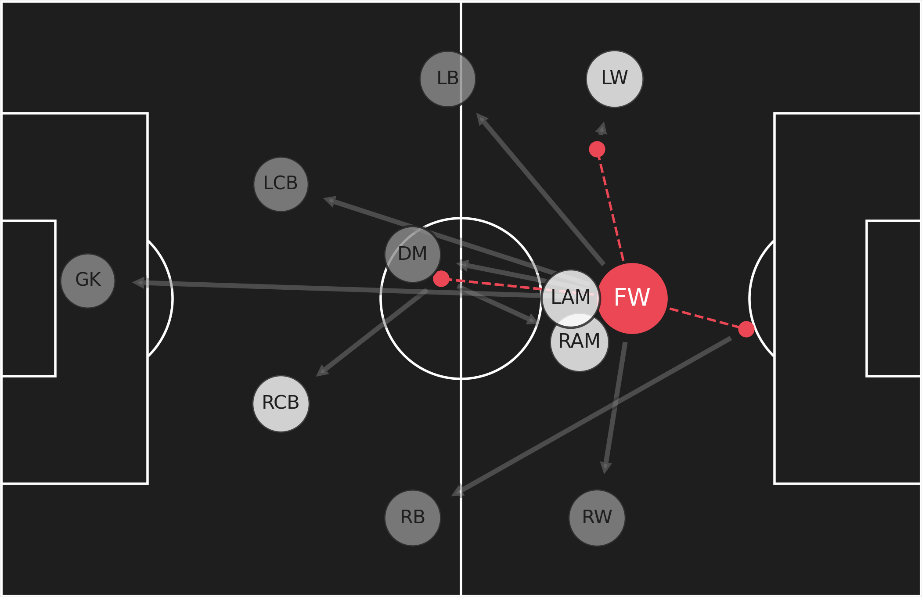 The final point to note, and perhaps the one of most debate is Bamford’s finishing ability. Observationally, this appears quite variable; a plethora of ‘‘good’’ chances missed are sandwiched by performances where he exemplifies what it is to be a clinical striker. His hat-trick at Villa Park was scored off just 1.6xG (per FBref). 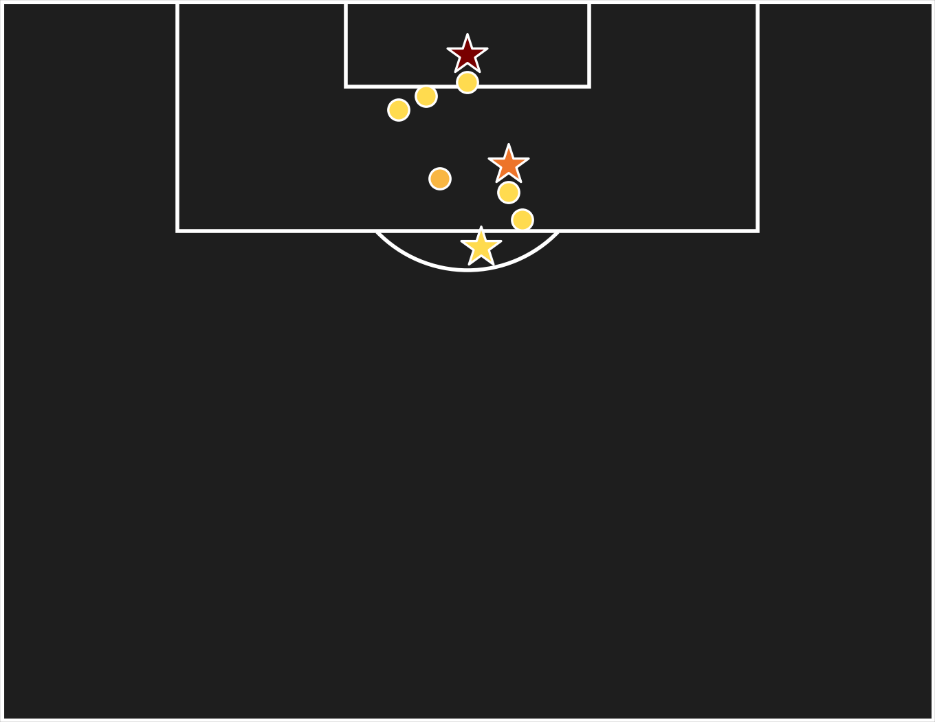 Ultimately, Bamford’s finishing abilities will likely remain variable; he will have bad days where he misses a couple of ‘‘good’’ chances. The key point is, that Bamford (almost) invariably gets ‘‘good’’ chances each week. Whether Bamford begins to consistently over-perform xG (at an acute level), or whether he remains in this state of finishing fluctuation, while producing the goods often enough for Leeds, remains to be seen.

What is for certain, is that Bamford has found his feet at Premier League level; gaining admiration and adulation as he plies his trade. With ten goals and two assists to his name, with less than half of the season gone (and only one of these a penalty goal), Patrick Bamford is proving to be quite the Premier League standard striker.