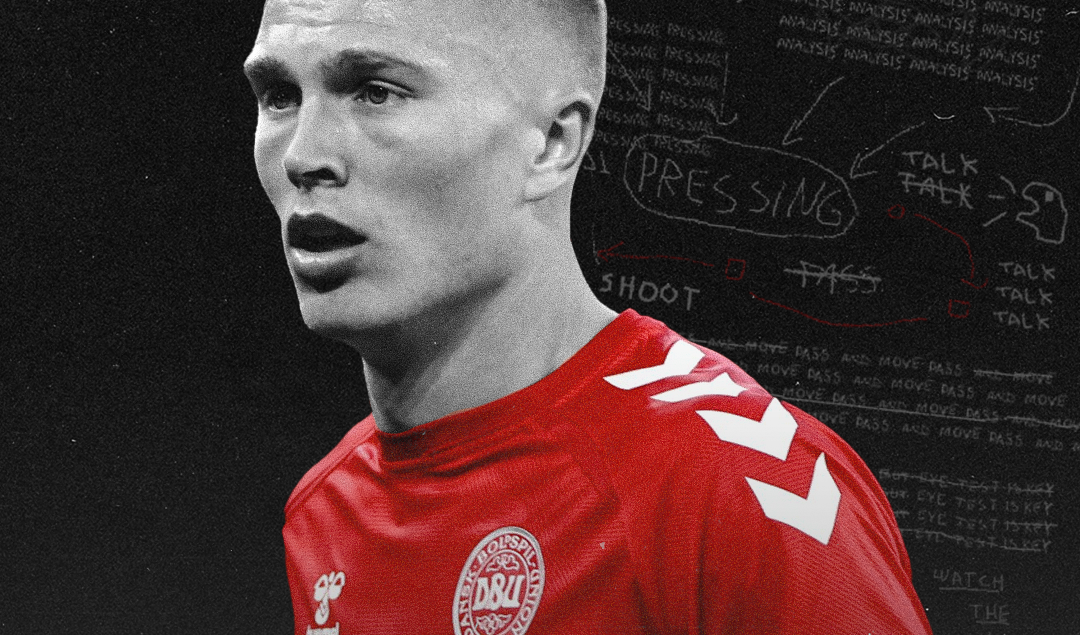 Leeds United have been hard at work to ensure their new manager Jesse Marsch has the tools to compete and avoid suffering from a lack of depth after barely securing a third consecutive Premier League campaign following a last-minute victory against Brentford to send Burnley to the second tier on the final day of the season.

Marc Roca has arrived from Bayern Munich — whether that’s to partner Kalvin Phillips in midfield or replace him remains to be seen — whilst Salzburg duo Brenden Aaronson and Rasmus Kristensen have taken their total expenditure to £45 million thus far.

Born in Brande, Denmark on July 11, 1997, Kristensen grew up and grew up amongst a family of footballers, the nephew of former Sturm Graz midfielder Sigurd Kristensesn and a cousin of ex Midtjylland defender Leon Jessen, who notched four appearances for Denmark before retiring in 2016.

Leeds’ Summer So Far and Their Left Back Conundrum

Kristensen would begin his development at local academy Brande before heading to Midtjylland where he would spend eight years, eventually becoming a key player in the 2016/17 season before moving to Ajax in January 2018.

He was unable to establish himself as a starter under Erik ten Hag, making just 20 Eredivisie appearances and struggling behind Noussair Mazraoui in the pecking order, before eventually moving to Red Bull Salzburg, ending his Dutch adventure after 1.5 years.

This proved to be the right decision for Kristensen who started each of Salzburg’s six Champions League matches and established himself as a key player under new manager Jesse Marsch, although his progress was limited after being sidelined for the second half of the season due to hamstring problems.

Marsch’s Salzburg would utilize a 4-2-2-2 formation, a proactive approach off the ball with his 2-2-2 block shifting the press towards one flank. If the opponent circulated the ball horizontally, Salzburg’s players followed the circulation of the ball to remain compact and organized. 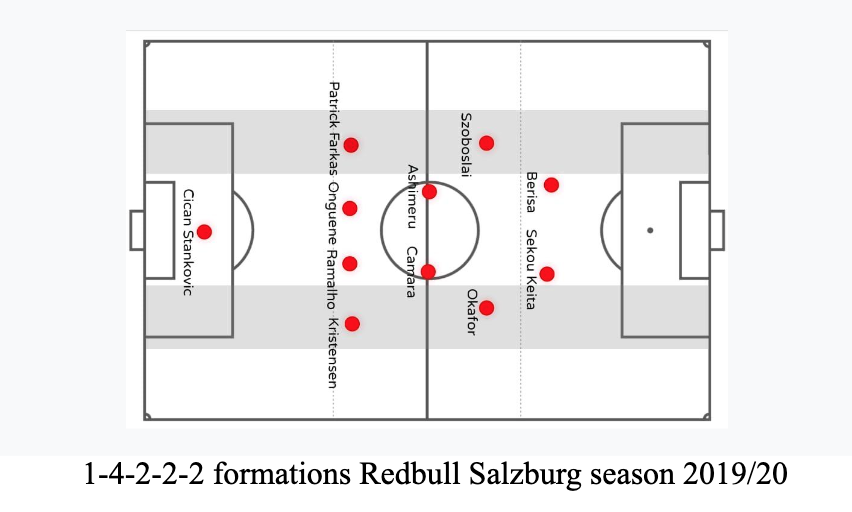 When the team isn’t in possession, Rasmus Nissen Kristensen would keep things tight at the back, constantly staying concentrated and aware, as seen in the below picture where he moves sideways to close down the opposing forward and prevent him from shooting in open space. 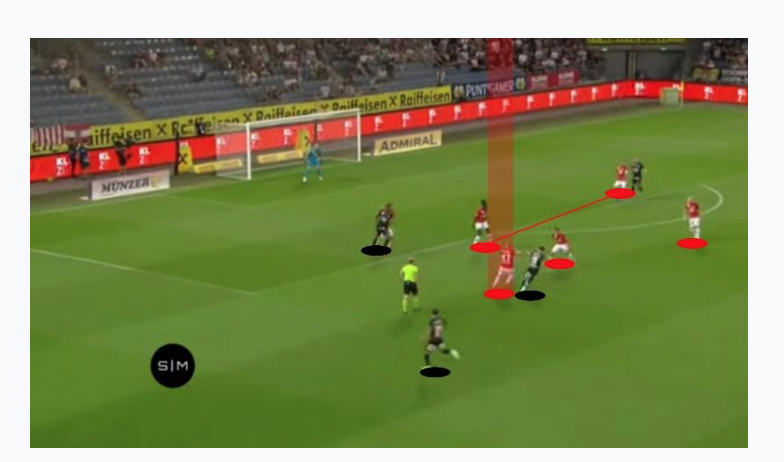 When Salzburg defended in the mid-block, again Kristensen made a defensive action with the right reaction. He comes from behind in zone 6 and has to leave his position to go out and press until in zone 9 or the bottom third of the right half. 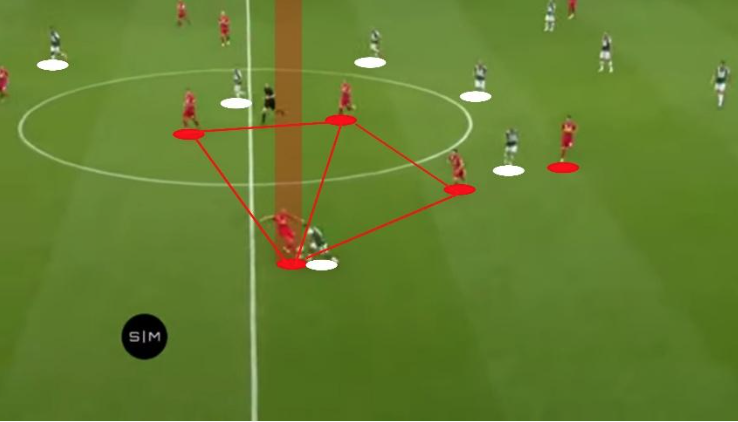 When the team is attacking, Kristensen becomes the team’s attacking outlet on the right side, often making overlapping runs and scoring goals from tight angles. In this picture, Kristensen received a lob and fired a dangerous shot that led to the goal. 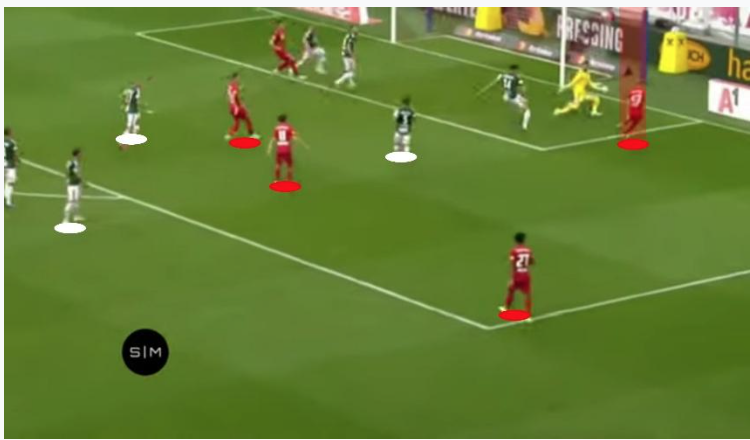 In this example picture, Rasmus Nissen Kristensen, in possession of the ball, instead of dribbling, however, instead provides an out-swinger cross into the 16-yard-box and Karim Adeyemi in zone 14 or between the center and the half-space. 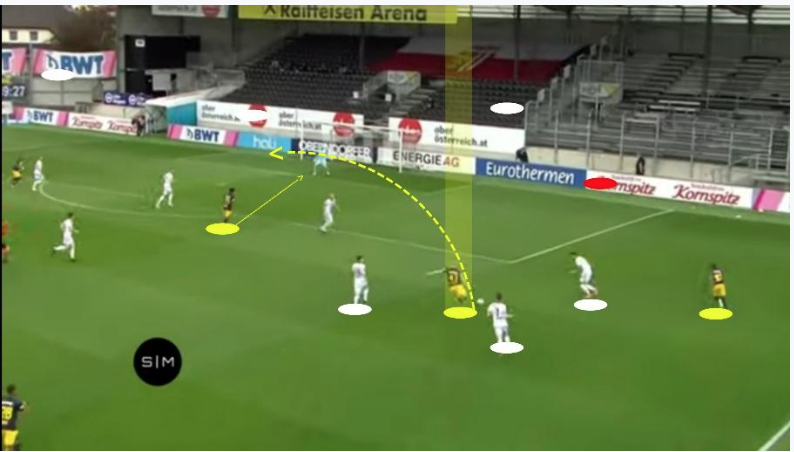 Kristensen quickly became a key player under Marsch in 2020/21 after an injury-plagued 2019/20, scoring 3 goals and 9 assists in 43 appearances as Salzburg won the domestic double. Despite losing Marsch as well as Zambian duo Patson Daka and Enock Mwepu in the summer, they would once again win the double under Matthias Jaissle as well as qualify for the Champions League knockout round for the first time in club history.

“Rasmus is a player who developed a lot over the last three years,” stated Marsch. “He established himself at Red Bull Salzburg as one of their best players, a very good Champions League full-back, and a Danish international. I am totally convinced that he will continue to grow into a great Premier League full-back as well.”

It has been a busy start to the summer for both clubs — Salzburg have lost Cameroonian center back Jerome Onguene on a free transfer to Europa League champions Eintracht Frankfurt, whilst also selling Karim Adeyemi to Borussia Dortmund, as well as Rasmus Kristensen and Brenden Aaronson to Leeds for a combined fee of €80 million.

With Leeds veterans Stuart Dallas and Luke Ayling sidelined for the foreseeable future with injury, Kristensen has everything it takes to lock down a starting spot and become a key player for both the short term and the long term at Elland Road. As he approaches his 25th birthday, Kristensen is set to take the opportunity by the scruff of his neck and do everything to convince Leeds supporters and Marsch of his value.