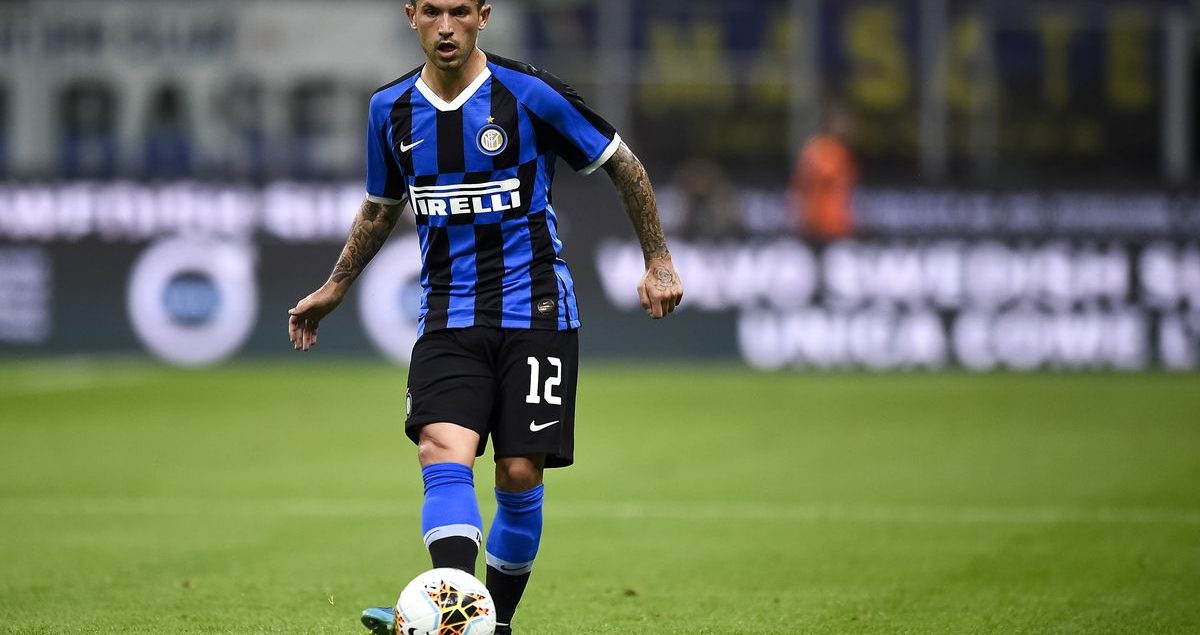 Player Analysis
As half-time approached and it seemed that the players of Inter and Udinese were heading to the dressing room scoreless, up popped the smallest man on the field, to score a header. That man, was 24-year old central midfielder Stefano Sensi who at 5 ft 6 inches somehow rose high to meet a Diego Godin cross to score the first and only goal of the night at the Guiseppe Meazza.
The look on the faces of the Friulians after they came to the realisation of just what had happened was worth a meme or GIF. His goal meant that Inter opened their Serie A season with a perfect record from their first three matches.
The man from Urbino came through the youth academy of local side Urbania, before three year stints at Rimini and Cesena. His professional debut came at San Marino in the Lega Pro six years ago, where he developed a bit of a reputation as a “hot head”, as he was sent off several times during his couple of years there.
By his own admission, he was  not “professional”.
Speaking to Sky Sport following the Nerazzurri’s win, he said “I’m recovering the first years of Serie A that I left behind for some nonsense of my own. To have the mentality I have now, I needed to make the mistakes of the past years, I was not professional as I am now.”
Sensi has clearly matured and he is obviously fully aware that he is entering the prime of his carear, so now is the time to fulfill his undoubted talents.
Those talents from the man who was inspired to play football by his older brother, has since seen him move up the ranks, both on the domestic and international level.
Sensi really established his game in Emilia-Romagna with Sassuolo, first under Eusebio di Francesco and then Roberto Di Zerbi. Blessed with super technique, ball control and significantly, tactically aware, which allowed him to operate in a variety of midfield roles, his growth in the last three years has been immense. Every season at the Mapei Stadium, he increased his appearances and goal output, and last season, which consequentially was his last with the Neroverdi, he ended the campaign with two strikes and four assists.
Not just were clubs looking on with a keen interest, but Azzurri manager Roberto Mancini was as well and he gave the “pocket rocket”, his national team debut, in their 1-0 victory over the USA in November 2018. He opened his account with his nation in a UEFA Euro 2020 qualifying encounter with Liechtenstein, with a, you guessed it, a header, as the 1968 European champions ran riot to win 6-0 at home in just his third game.
Sassuolo finished a respectable 11th place in Serie A last year and inevitably, Sensi was courted by a number of top clubs during the summer transfer window.
It was il Biscione who won the race to his signature for an initial loan fee of 5 M Euros, with the fee to make the move permanent, requiring a further 20 M Euros, from the three times European champions.Given his phenomenal start to his life in Lombardy, it is guaranteed that he will indeed be at Inter next year and the transfer amount is already looking like bargain.
So far in a mere three matches for the club, he has been arguably their best player, as he also scored in the opening round of the season, a 4-0 rout of Lecce and he ran the show in Sardenia, as well in the second game. Against the home team Cagliari, from his central midfield position, it was his cross to Lautaro Martinez, that allowed the Argentine to give the team the lead and he won the penalty in the second half, that was converted by Romelu Lukaku, as they triumphed 2-1.
He also appeared in both of Italy’s recent Euro 2020 qualifiers versus Armenia and Finland, replacing club teammate Nicolo Barella in the first from the bench and starting in place of the suspended Marco Verratti in the latter.
With both his club and his country, Sensi is being played in basically a three-man midfield set-up and he has thrived in whatever role has been asked to play. Earlier in the article, it was pointed out that he is very tactically astute, which means he is being played right across the middle of the park. Due to his all-round ability, he has played in both offensive and defensive roles, covering an enormous amount of ground.
Whether it’s picking out defense splitting passes, making slide tackles to stop opposition counter-attacks or always being readily available to his teammates, Sensi’s play over the last year has been one of the best stories in Italian football.
It’s why he seems set for years to come to play a vital role with both Inter and Italy.
By: Vijay Rahaman
Photo by Nicolò Campo/LightRocket via Getty Images
Share:
TwitterFacebookEmailLinkedIn