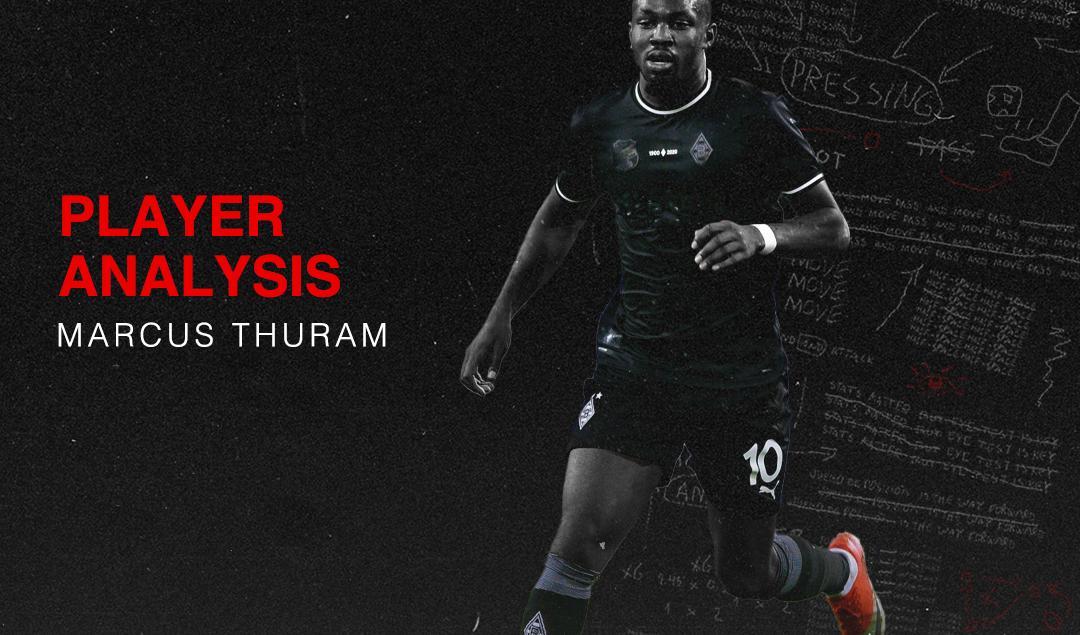 It’s a challenge to find a player who better embodied Borussia Mönchengladbach‘s collective demise last season than Marcus Thuram.  The West-German outfit finished outside of the top half of the table for the first time since 2011, and the once-influential French international looked a shadow of his former self.

Of the 37 games Gladbach contested in the league and cup, Thuram missed 13 through injury, and even when fit, the Frenchman rarely provided the level of performance that had sparked the interest of multiple European top clubs over the summer.

His 3 goals and 1 assist were a measly return for a player who had held 15+ goal contributions in each of his last two Bundesliga seasons, but even this sore fact was overshadowed by the general impression Thuram gave off in 972 minutes of league action.

Whether as a starter or a sub, the 4-time France international struggled to integrate himself into Adi Hütter’s match plan, and the knee ligament tear he suffered in the off-season left a lasting impression on his fitness and top speed.

One Unique Stat for Every Bundesliga Team

Even his mentality was questioned, with Lothar Matthäus  – legendary Gladbach and Germany midfielder and influential Bundesliga pundit – making his opinion known after another lacklustre performance in early March.  “He just doesn’t care… does not care! It’s the entire season already.  I experienced Thuram last year: speed, enthusiasm, going for goal, effort – all gone.

With a contract due to expire at the end of this season, a World Cup spot looking out-of-reach, and all of Thuram’s A-list offers to flutter away in the wind, this once dazzling young superstar was suddenly an underperforming 25-year-old standing ahead of a make-or-break-campaign at the Borussia-Park. Would the French forward rise to the occasion, or become the next fading talent to sink under the weight of expectations?

If the first 16 matches are anything to go by, Thuram has chosen to rise to the challenge. With 12 goals and 4 assists, the French forward has already more than doubled his output from the 2021/22 season and is only behind Niclas Füllkrug and Christopher Nknuku in the Bundesliga’s goal-scoring charts.

His consistent output has even made him an argument for the French national team again after missing out on every international camp since the European Championships. Only Kylian Mbappé has scored more in one of Europe’s top 5 leagues this season.

The reasons then why Gladbach are climbing up the table – and Marcus Thuram is suddenly one of the most prolific forwards in Europe – are numerous, but chief amongst them is the position that Thuram is taking up on the pitch. In his first 3 campaigns in Germany, Thuram split time between centre forward and left wing, but this season he has exclusively been used up top by manager Daniel Farke.

It’s a masterful decision from the former Norwich City boss, as the entire side has profited off of Thuram’s ability to both create and get into goal-scoring opportunities with his uniquely balanced skill set. At 1,92m Thuram is taller than an elite aerial poacher like Anthony Modeste (1,88m), or a strong hold-up forward like Romelu Lukaku (1,91m), but his imposing size and physical presence have done little to reduce the elite pace which made him such an eye-catching winger when breaking through at EA Guingamp.

Despite notable knee, ankle, and muscular injuries, Thuram remains a dynamic threat, clocked at an impressive 35.72 km/h this season. That’s the 7th top-speed in the entire Bundesliga after 10 matchdays, and the most any out-and-out centre forward has managed since Erling Haaland last season (36.3 km/h).   With the capacity to hold up possession, provide an aerial threat, and threaten in behind, Thuram offers a trinity of skills that is truly unique amongst strikers in the German topflight.

Gladbach’s 2-2 draw versus VFL Wolfsburg on October 15 highlighted the full-range of talent that Marcus Thuram offers. Not only did he score two goals, but the Frenchman constantly showed his ability to hold up possession, contest aerial duels, and operate in tight spaces.

Gladbach have turned an underperforming winger into one of the deadliest centre-forwards in Europe. But it’s no coincidence that Thuram has come alive in a position where he is constantly getting into dangerous shooting positions.

Whereas Bundesliga forwards like Sheraldo Becker, Nils Petersen, and Oliver Burke earn plaudits for their ability to take every chance that comes their way, Marcus Thuram is quite the opposite, needing a steady supply of opportunities to end the season with an elite goal-scoring tally.

In three full seasons, Thuram has taken 151 shots and scored 21 goals – a rate which averages out to an unremarkable average of a goal every 7th shot. Not only is this quite poor compared to other elite strikers, but amongst the forwards with notable minutes in the Gladbach squad, only Alassane Pléa converted fewer shots into goals during the same time frame (below). 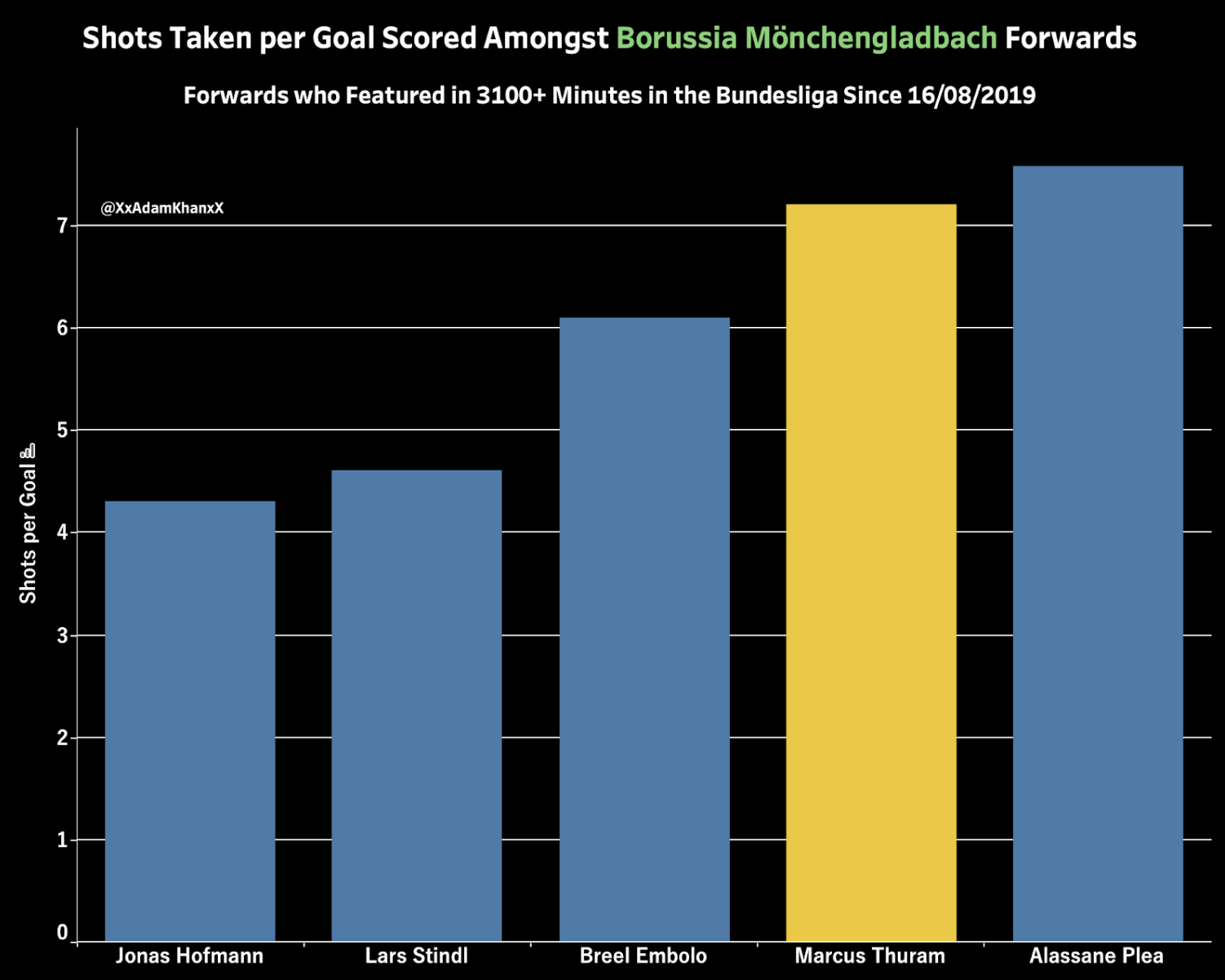 When on the wings, Thuram was rarely afforded the number of shooting opportunities to turn fairly average finishing into elite-level output. As a central focal point now, the 25-year-old is finally getting into positions where a missed chance isn’t proving fatal.

This is reflected in the data: no Bundesliga player has taken more shots, or shots on target than the French forward. A constant string of chances is what Thuram has needed to see his output explode, and if he can pair this elite-level shot creation with more reliable finishing, it’s hard to see where his ceiling lies. 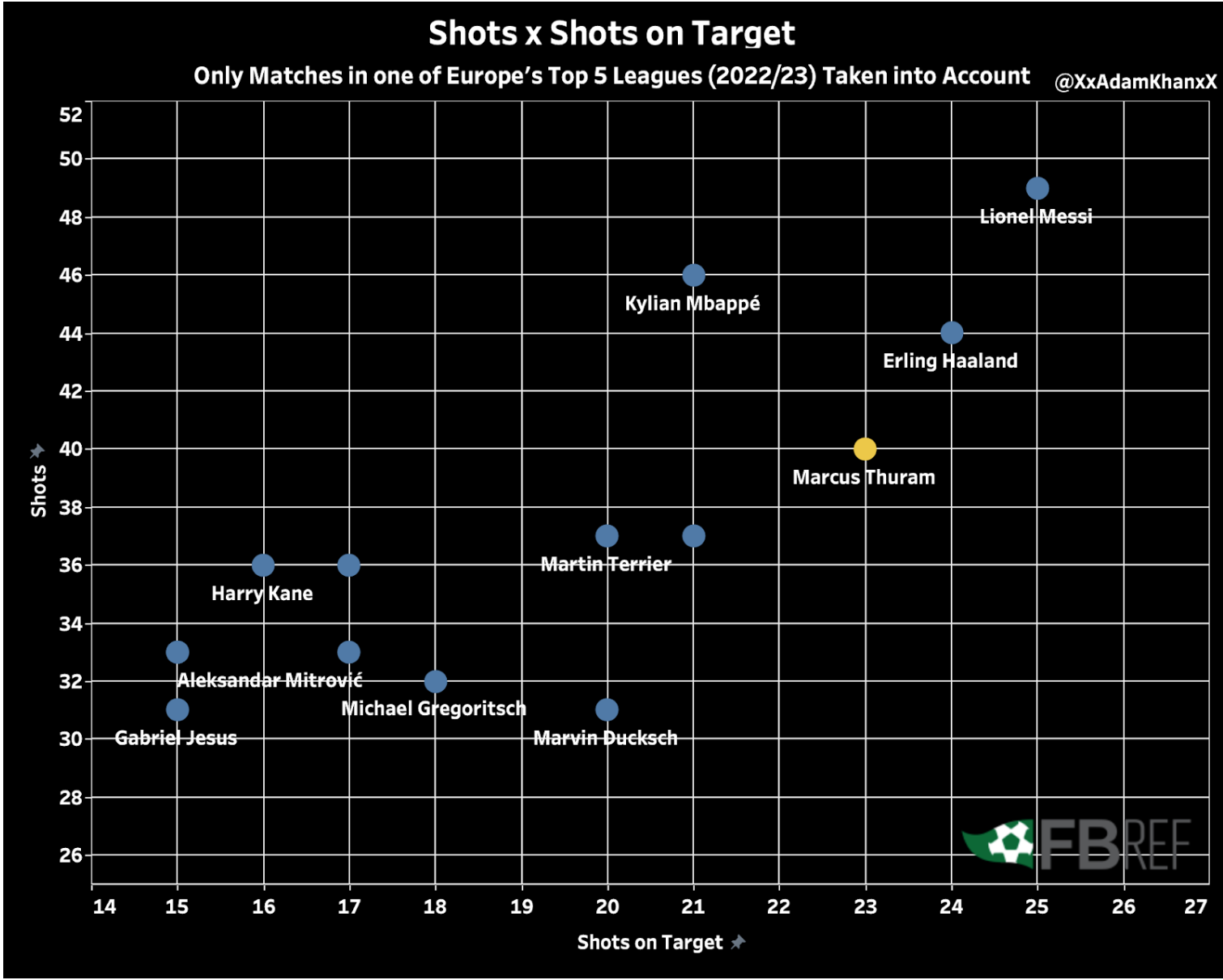 To take the next step in his career Marcus Thuram will need to become more effective with the chances he creates, but it’s notable that in Europe’s top 5 leagues only Lionel Messi, and Erling Haaland have let off more shots on target.

The move to centre-forward has not only been crucial in getting the most out of Thuram’s varied skill set, but a transition away from the wings has also been pivotal in alleviating the issues surrounding the French international’s poor fitness. Under two managers (Marco Rose and Adi Hütter) heavily influenced by the Red Bull school of thought, Thuram was required to contribute a lot in the defensive phases.

While willing to put in the effort, it often had a negative effect on the Frenchman’s impact in possession.  Knackered by the 60th minute, one typically got the impression that Thuram left multiple goals on the table simply due to his inability to keep up the intensity.

The numbers only support this assessment. Across the last two seasons, Thuram has gone the full 90 minutes on just 5 occasions in the Bundesliga, and of the 21 goals the Frenchman scored between 2019 and the beginning of this season, only 4 came beyond the 60th minute.

A full pre-season, extra shifts in the weight room, and a summer without international duties have helped Thuram return to Gladbach in the optimal physical state, but a lot of the credit for Thuram’s return to form also needs to go to Daniel Farke.

The former Norwich City boss has simplified the Frenchman’s demands both in and out of possession, allowing him to concentrate his limited energy on the key moments in the final third. After 10 matchdays, Thuram was averaging the fewest tackles and pressures in his Gladbach career, yet even this statistic is overshadowed by his (almost) complete inactivity in controlled-possession phases.

With 32.5 touches per game, Thuram is completing 10 fewer touches than his previous Bundesliga average, and the long stretches he spends without possession make him by far the least involved player in the Gladbach squad. 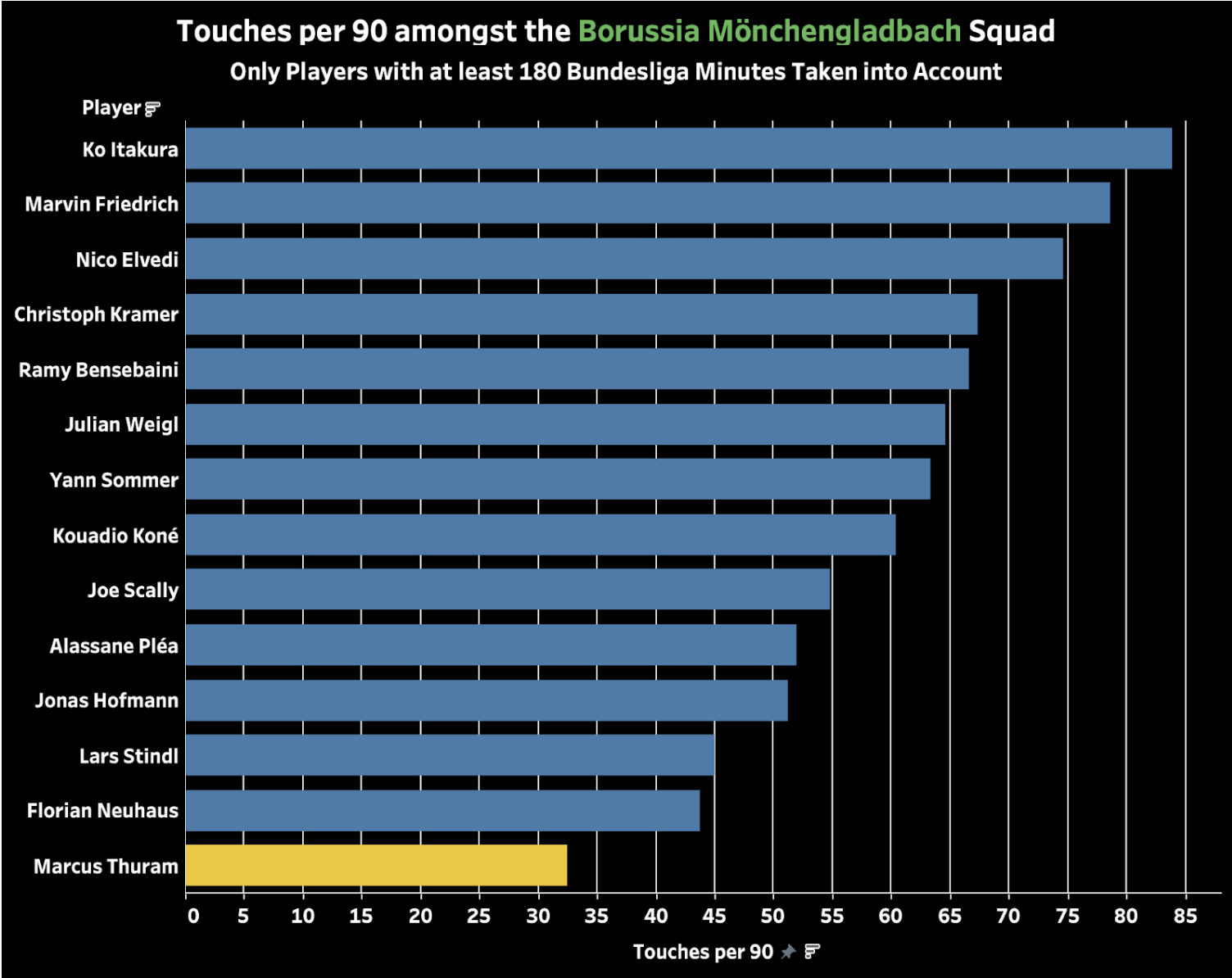 This simplification of the French international’s game has not only enabled Thuram to be on the pitch for all but one minute this season, but it’s also completely redefined his role in the final minutes of matches. Whereas last season the 25-year-old was the individual often falling behind in pace and endurance, this campaign, Thuram is setting the tone in the dying embers of matches.

4 of his 7 goals in the league after 10 matchdays came after the hour mark, a tally that only Füllkrug was able to equal with the helping hand of 3 penalty kicks. Though we are only months away from Marcus Thuram’s contract expiring at the Borussia-Park, there is still a sliver of hope that he may extend his tenure amid the renaissance of form he is experiencing under Daniel Farke.

Gladbach are in with a chance of returning to Europe next season, the club will do anything not to lose another key performer, and influential personnel like Jonas Hofmann and Alassane Plea have already paved the way with their own new deals earlier this year.

More than anything though, what speaks in favour of a long-term renewal is the return of the emotional bond binding the club Borussia Mönchengladbach, and the player Marcus Thuram. As Daniel Farke said in an interview with Sportbild earlier this season, “Marcus has his heart in the right place. He’s an emotional player who needs to feel comfortable and secure. In an atmosphere where players feel valued and accepted, performances are always better.”

Whereas last season the Frenchman cut the figure of a dejected passenger seemingly desperate for a change of scenery, under Farke, the inner green & black fire has returned within the Frenchman. With elite performances this season, Thuram will once again be spoiled for choice on the international market, but it will be up to him whether the chapter at Gladbach ends this season, or this remains just the beginning of an impressive renaissance for a club patiently waiting for a major trophy for almost 3 decades.