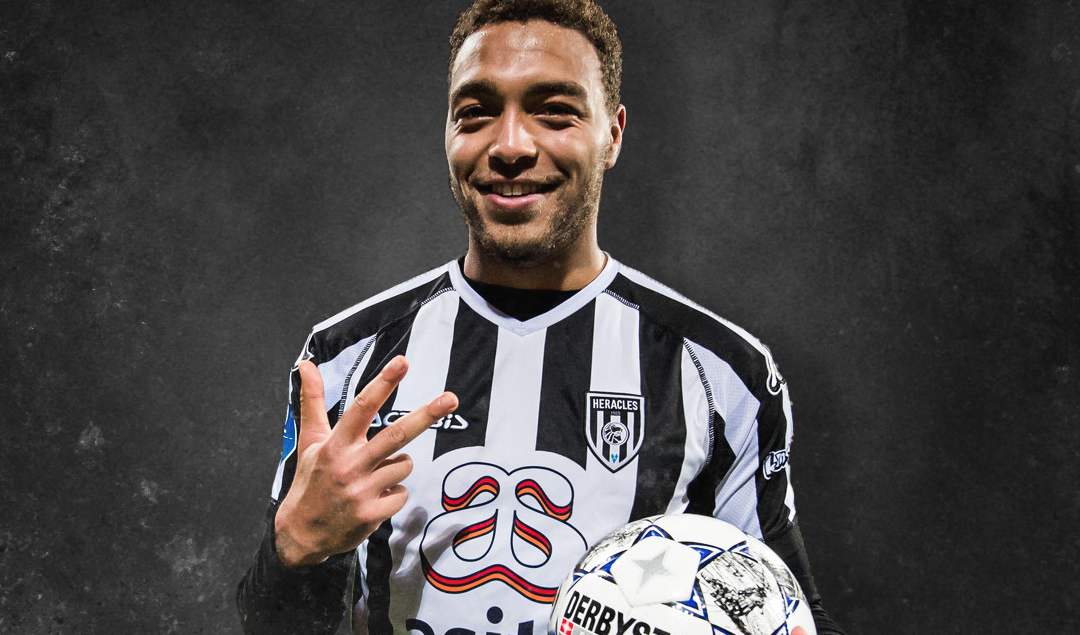 Player Analysis
It was like every other Sunday in the Eredivisie. Kick off was at 4:45pm CET at the Polman stadion, Almelo. Ninth placed Heracles hosted current champions & leaders – Ajax Amsterdam – who were six points clear of AZ Alkmaar prior to the start of the game.
If José Bordalás’ Getafe made Erik ten-Hag think twice about why they flattered to deceive in the Champions League, Frank Wormuth’s side were about to blow the title race open.
Fast forward to the 75th minute. Ajax midfielder, Ryan Gravenberch fouls Heracles on loan winger, Delano Burgzorg in the home side’s half. Up steps Heracles goalkeeper, Janis Blaswich (who has the 4th highest number of clean sheets in the Eredivisie this term) to take the free kick.
A simple long ball to the Ajax defence, the ball bounces behind Daley Blind. As expected, Cyriel Dessers is the first to react, with a volley Robin van Persie would be proud of. Dessers’ shot catches Andre Onana off-guard & the ball flies in the top corner. 1-0, Heracles Almelo take the lead, Polman Stadion erupts. Dessers had 14 goals going into this game, but it was this one that announced him to Europe as the real deal. Of course it would. It was against last season’s Champions League semifinalists, Ajax.
The Dutch league over the years has produced some of football’s greatest minds. From Johan Cruyff to Nwankwo Kanu, Finidi George to Arjen Robben, the Eredivisie is clearly Europe’s cradle of the finest footballing talent. Of the top five goalscorers in the Eredivisie, three are under the age of 26 & are of African descent. AZ Alkmaar’s duo – Myron Boadu (Ghana/Holland) & Oussama Idrissi (Morocco/Holland) are aged 19 & 24 respectively.
Their combined goal contributions to Alkmaar’s season is at a whopping 69%. Compare that to the top scorer, 25 year old Cyriel Dessers (Nigeria/Belgium) who’s contributed 55% of Heracles’ goals in the league thus far (15 goals, 5 assists). This alone shows what a special player he is.
Dessers began his career at arguably Europe’s youngest top flight club, OH Leuven, which was founded in 2002 in his native country of Belgium. At the age of 19, young Dessers was tearing it up in the Belgian reserve league for Leuven.
Following injuries to so many first team players, he was promoted to the senior team but was limited to just two appearances in the league. Relative successes followed after he moved to Lokeren, NAC Breda & FC Utrecht before German tactician Frank Wormuth convinced the Heracles board to double the €350,000 Utrecht paid for him to bring the talisman to Almelo.
A quick, skillful centre forward, Dessers’ main strength is his link-up play. His ability to work with his teammates in & outside the box & mobility makes him a 21st century striker. He’s also a threat at set pieces & finishes almost every clear cut chance he gets.
At the age of 20, he was called up to represent the Belgian U-21 team in a UEFA Euro U-21 Qualifying game versus Moldova, but was an unused substitute in the end. His performances this season has obviously taken him to another level, 20 goals & assists for the “Brighton & Hove Albion of Dutch Football” is no mean feat.
Off the pitch, Dessers is represented by Stir Associates, a Belgian football agency with big names like Tottenham’s Toby Alderweireld & Napoli’s Dries Mertens on its clientele.
Considering how good their careers have both panned out, we can safely say the young man knows what he’s doing. This is undoubtedly his breakout season & Heracles know they may not keep him beyond this. With Hakim Ziyech joining Chelsea at season’s end, it won’t be a surprise Ajax sign him to bolster their attack. A move which would make perfect sense.
Recently, he made known his desire to represent Nigeria on the international stage. “The family & everyone is waiting & hopeful” he said. It’s now a matter of when will Gernot Rohr (Nigeria’s manager) give him a call.
Nigeria now boasts of the strikers with the most match winning goals in Europe’s top five leagues (according to whoscored.com), Lille’s Victor Osimhen, the man who shocked the Bernabeu, Brugge’s Denis Bonaventure, the first player in English football to be awarded a goal due to VAR, Leicester’s Kelechi Iheanacho & the reason I wrote this article, Cyriel Dessers.
All under the age of 25, we can safely say the future of the Super Eagles is bright and maybe, just maybe a Nigerian wave is about to hit European football in gargantuan fashion as it did when the likes of Finidi George, Daniel Amokachi, Taribo West, Jay-Jay Okocha, Kanu Nwankwo, etc were in the prime of their careers.
As we say in Nigeria, “This na our game, we go play am cos we sabi”.
Photo: Goal.com
By: @DezReport
Share:
TwitterFacebookEmailLinkedIn