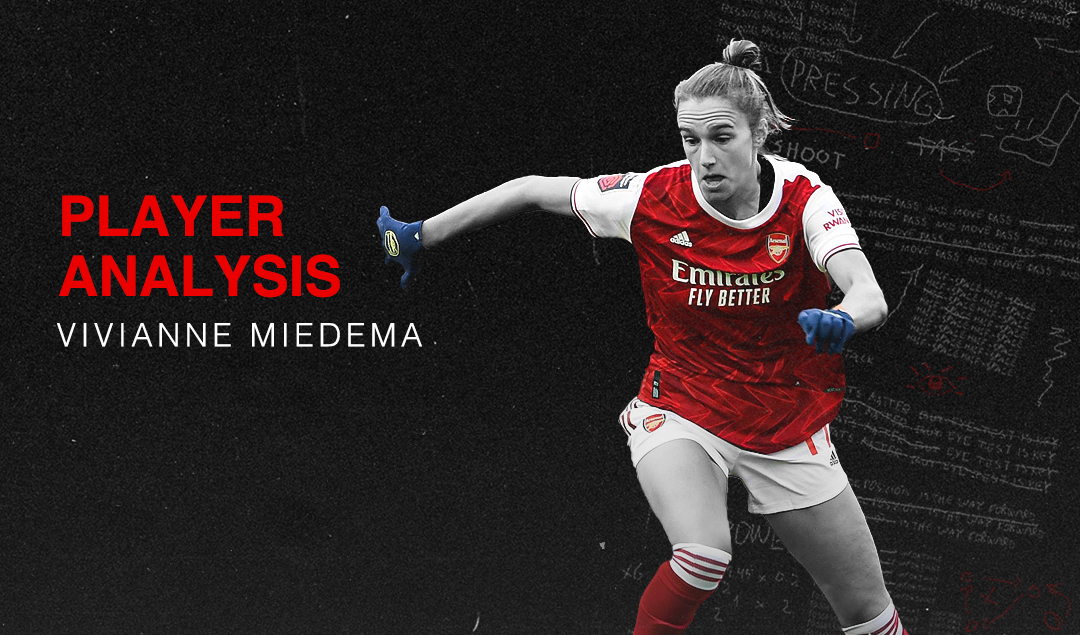 When we talk about female strikers, there is one name that pops up instantly – Arsenal’s number nine, Vivianne Miedema. The Dutch striker is arguably the most prolific striker to have graced the world of women’s football, let alone the Women’s Super League (WSL). As Ian Wright rightly tweeted, “Every single goal Viv scores is a history-making goal. We are lucky to watch her.”

Of the several records Miedema has conquered and now holds, the one that has to stand out is her being Netherlands’ all-time top-scorer across both the women’s and men’s formats with 70 goals. She is also the WSL’s historic leading goal-scorer with 53 goals (as of November 2020).

The list, however, keeps continuing. In the 2018-19 WSL season, Miedema made history by scoring a total of 22 goals; while also scoring 6 and assisting 4 in a game against Bristol City the same year. Inevitably, she also has the most goal involvements (75) in WSL history by a single player. It is little surprise that, even at 24 years of age, she is already being called the greatest player in the league’s history.

Stunningly, Miedema signed her first professional contract with SC Heerenveen at the mere age of 14. She made her debut for the Eredivisie club a year later in the 2011-12 season, becoming the youngest debutant in the history of the competition. Not only that, she scored 10 goals over the course of the season, finishing second on the goalscoring charts.

However, we all know Miedema loves to outdo herself. The Dutch scored 27 goals the next season and 41 in the season after that. At just 17 years of age, she won the highest goal scorer award in the 2013-14 Eredivisie season, scoring 15 goals more than the player who followed her. Having long been scouted by Bayern Munich, Miedema signed with the German giants in 2014, but an ankle injury kept her off the pitch for most of the 2014-15 Frauen-Bundesliga season.

She came back stronger the following season, scoring 14 goals and helping Bayern Munich to a second straight German title. However, Miedema quickly found Bayern’s long-ball tactic very unsatisfactory and decided to enter into contract negotiations with other clubs, and the lucky club that signed her in the summer of 2017 was Arsenal. As she used her first season at the club to settle down and get used to WSL, Miedema’s breakthrough moment came in the WSL Cup final in which she scored the winning goal in a 1-0 win over Manchester City, leading her team to the trophy.

Indeed, Miedema rode on this momentum and took the league by storm in the 2018-19 season. She scored a hattrick in her first game of the season against Liverpool in a scintillating 5-0 win. Miedema ended the season with 22 goals, a WSL record which also meant she was honoured with the PFA Women’s Player of the Year award; as Arsenal also clinched the WSL title the same year. The following season, Miedema scored 16 goals in 14 games – including a mind-blowing six goals and 4 assists in an 11-1 battering of Bristol City. For her achievements in the 2019-20 season, she was named the FWA Women’s Footballer of the Year.

Miedema broke Nikita Parris’ WSL goals record in October last year, scoring every 83 minutes compared to Parris’ 171 minutes. Deservedly, she was also named in FIFA’s FIFPro Women’s Team of the Year for 2020. In the current season too, Miedema already has 11 goals to her name while also having recorded three assists. 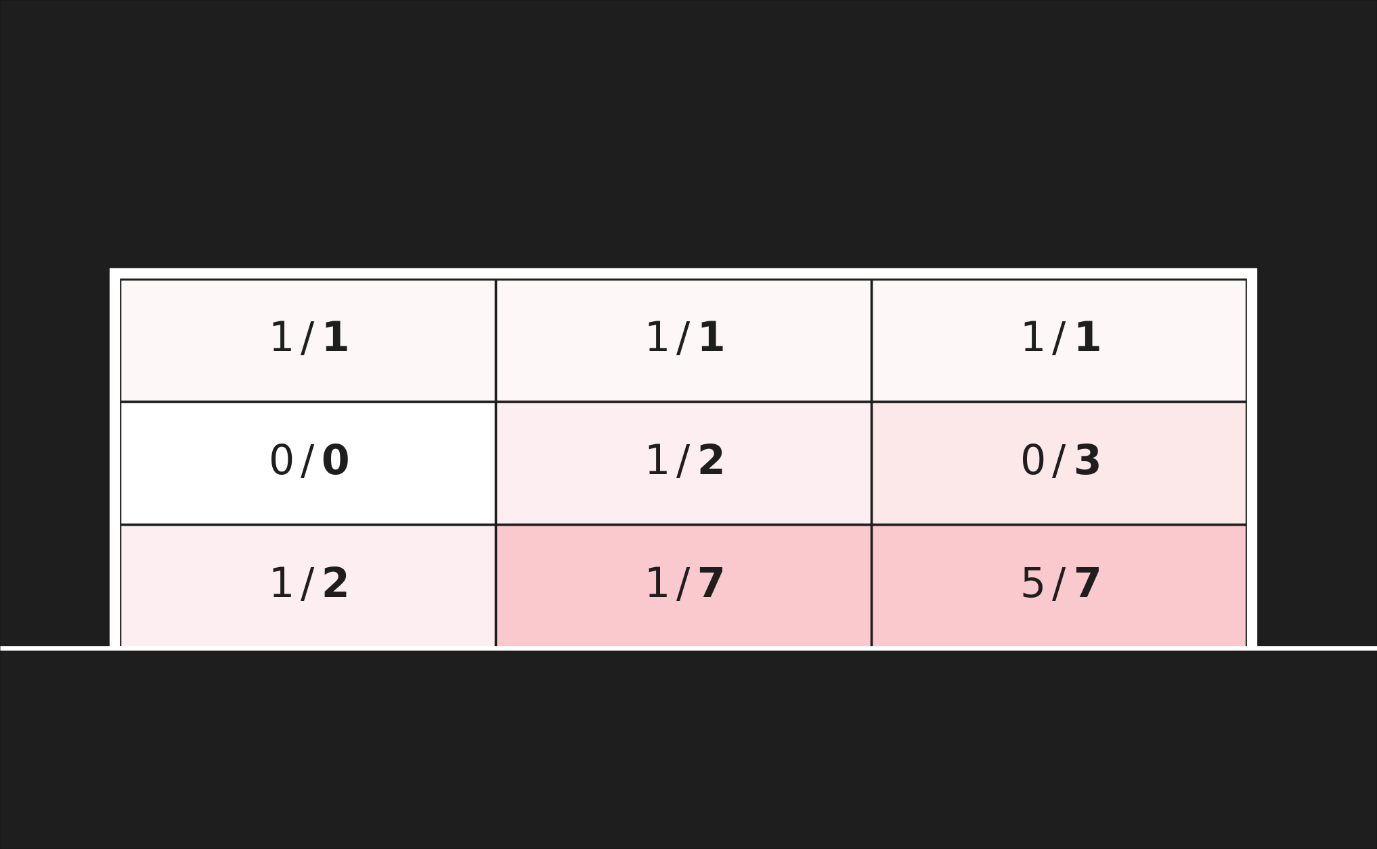 Miedema made her international debut in September 2013 as a substitute against Albania. A month later, she scored her first goals for the Netherlands in a thumping 5-0 win over Portugal. However, she was plagued with injury through most of 2014 and couldn’t impact the 2015 Women’s World Cup as she would’ve liked to.

She even admitted later that she felt certain “pressure” during the tournament. As she was rehabilitating, the 2017 Euros came about. This time, there was no stopping her. Although Miedema didn’t quite replicate her goal-scoring form, she was excellent throughout the competition. Her two crucial goals in the final against Denmark also saw the Netherlands crowned as champions of Europe.

In June 2019, Miedema broke the all-time Dutch goal-scoring record, surpassing both the men’s and the women’s tallies. She once again sparkled at the 2019 Women’s World Cup, the only blip being Netherlands falling victim to the United States in the final.

At a height of 5’9” – with a mix of superb movement off the ball and lethal finishing, Miedema has all the exact qualities you would want in a striker. This also makes her perfectly suited for the role of a “Target Woman.” A target woman is a striker who can receive long balls, hold up the play and create chances for herself as well as her teammates running beyond her.

A common attacking tactic deployed by manager Joe Montemurro is cutting the ball back from the flanks, and Arsenal know how to use it very efficiently. With Miedema playing through the centre and holding the ball up, the wingers can run into space on the flanks to receive the ball from her. As one winger prepares to cross or cut the ball back, Miedema makes her way into the box. Her clever movement causes huge problems for opposing defences and her deadly ability to finish helps Arsenal tons of goals from these situations.

Another very vital aspect of her game is ball retention. Miedema has excellent close control and this is also the reason she wins so many fouls both inside and outside the box. It also allows her to turn quickly and create goalscoring opportunities for herself, most of which she converts. She has the most touches in the opposition box (66) by a player in the WSL this year. 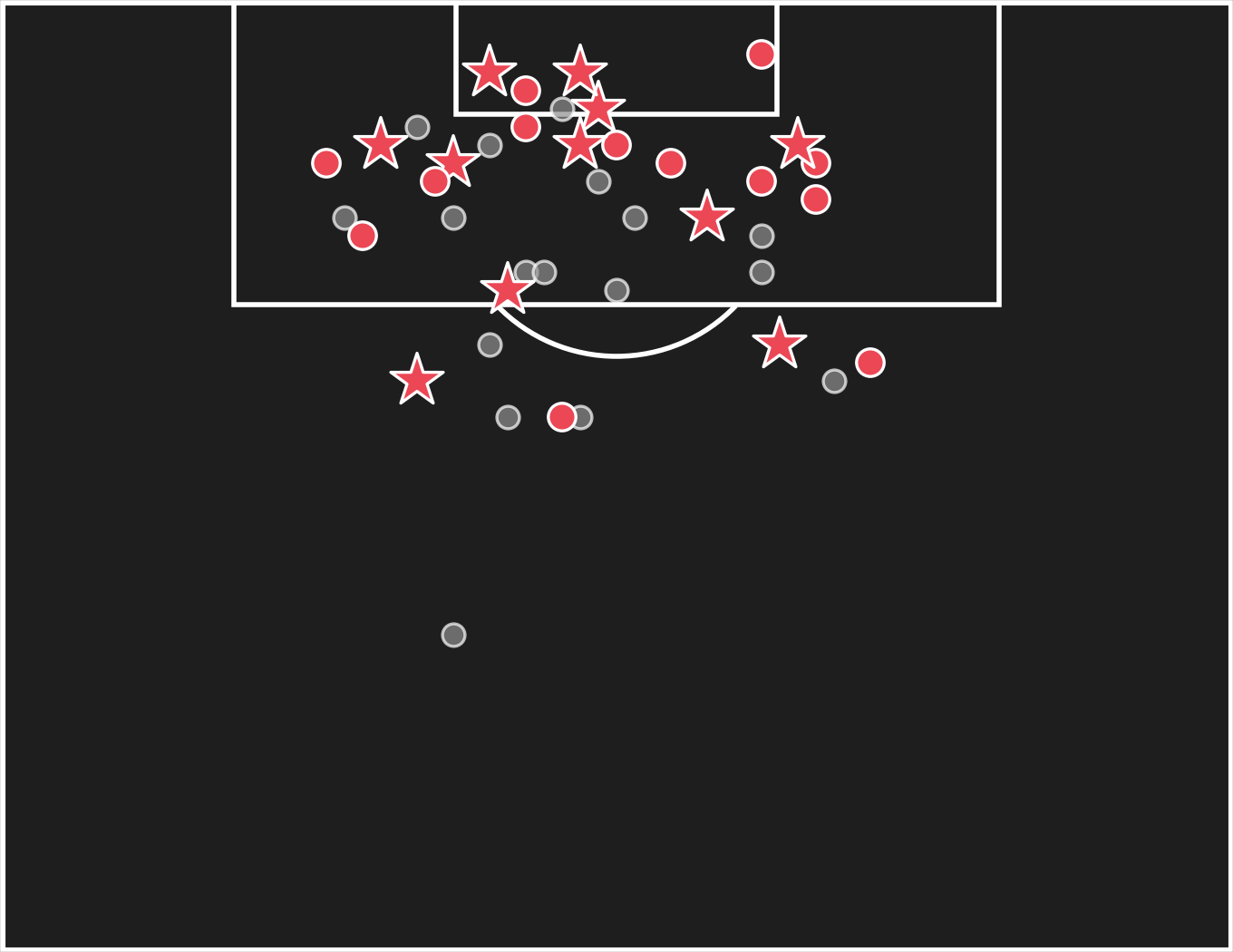 The fact that Miedema scores 1.15 goals every 90 minutes just goes to show why she’s the best striker in the WSL. Extraordinarily, she has an xG of 7.05 and a post-shot xG of 9.39 – way, way higher than Sam Kerr who sits second on that list. She has also taken the second-most shots in the league (41) while engaging in the second-highest number of attacking duels (142). Some of these statistics make her better than even the best male strikers out there, almost superhuman.

Not only that, Miedema doesn’t even need to worry about her weak foot because she doesn’t have one. Equally adept on both feet, she can torment defenders with her unpredictability on either side. She has a 27.6% goalscoring percentage, with about 66.70% of her passes towards the penalty area being inch-perfect. This highlights another one of her strengths – creating chances. The Dutchwoman has the second most successful through passes in the league (7) this season as well as 77.67% passing accuracy. 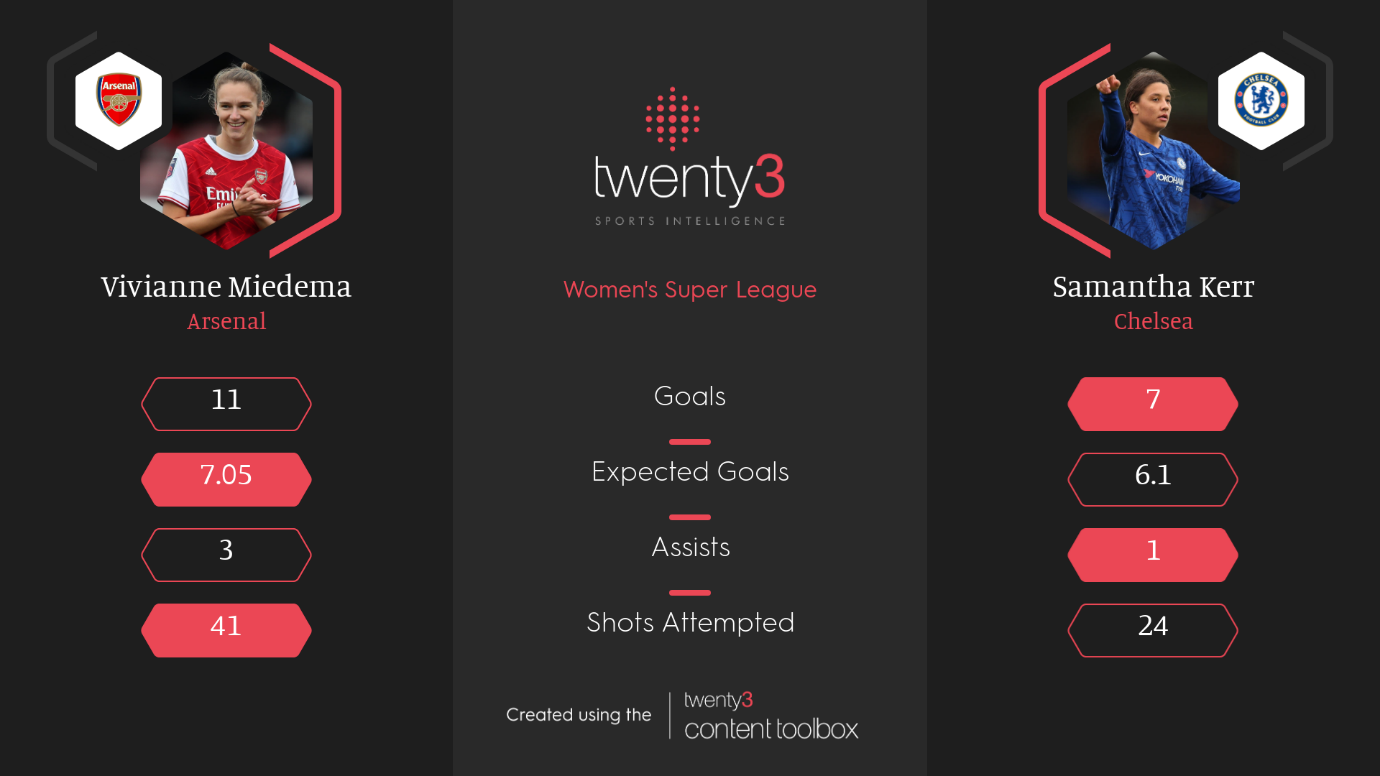 We discussed above how Miedema plays brilliantly as an out-an-out forward. However, her artillery also includes the role of an “Inside Forward.” Although she hasn’t played this role very often, she excels at it whenever she does take it up.

Basically, an inside forward is tasked with exploiting space out wide and bringing the ball back in, either to shoot or passing it to the overlapping runners. With about a 64.1% dribble rate, it’s unsurprising that Miedema chooses the former option more frequently. Interestingly, Miedema’s heat map shows a small bias towards the left side of the pitch. This comes from her being right-footed and receiving more diagonal passes from the players on the right. 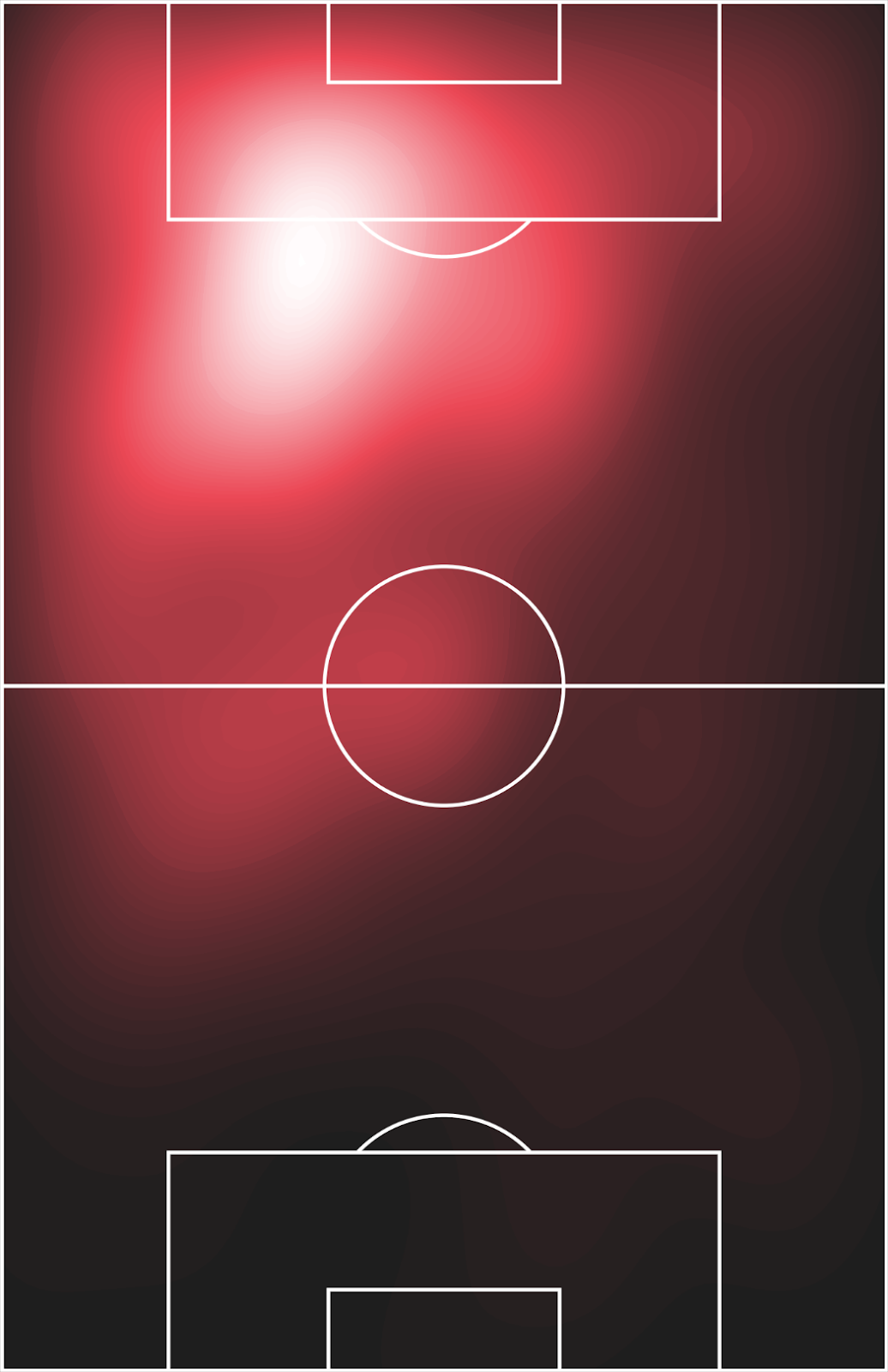 At 24 years of age, Vivianne Miedema is already staking a claim to being the greatest striker in the history of women’s football. The competition is fierce, with the likes of Christine Sinclair, Mia Hamm and Marta having more complete résumés, but Miedema is already the all-time leading goalscorer in the history of the WSL as well as the Leeuwinnen, and she will have a chance to avenge the defeat in Lyon and lead the Netherlands to glory in the 2023 FIFA World Cup.