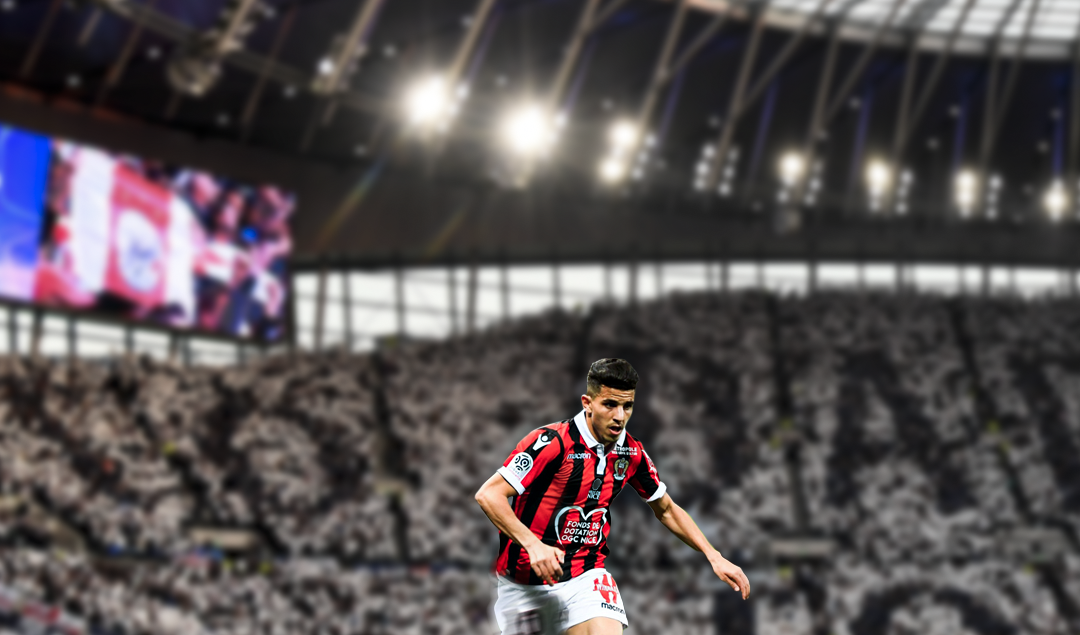 Tottenham Hotspur have enjoyed a successful transfer window so far. They wrapped up the double signing of Tanguy Ndombele and Jack Clarke at the start of July for a combined £65 million and have good reason to feel optimistic ahead of the 2019/20 campaign.

The two acquisitions the club have made are shrewd both for the here and now and for the future. Ndombele is the marquee signing in midfield that Mauricio Pochettino has craved since Mousa Dembélé’s departure, while Clarke is a bright prospect, and will ply his trade back at Leeds United in the upcoming season.

However, the job is nowhere near done just yet. If Tottenham are serious about challenging the dominance of Manchester City and Liverpool at the summit of the Premier League, further reinforcement is necessary, particularly following the recently-confirmed departure of Kieran Trippier to Atlético Madrid.

The England international was sold to Diego Simeone’s side for £21.7 million after he endured a difficult campaign with Spurs. On the back of a successful World Cup last summer, he failed to impress, and this has led Pochettino to allow him to leave the club for pastures new in the top flight of Spanish football.

With Trippier gone, though, Tottenham have a gap to fill. Their priority must now be to sign a new right-sided full-back, with concerns over the reliability of Serge Aurier and Kyle Walker-Peters still lingering. Simply put, the team have little chance of challenging for a Premier League title if they have a weak link – as they did last term – down the flank.

Pochettino will undoubtedly have his targets in mind, but if he is on the lookout for a dynamic, quintessential modern-day right-back with the potential to become among the world’s elite in his position, he should look no further than Youcef Atal.

The 23-year-old had a superb debut season with OGC Nice, flourishing under Patrick Vieira. Having recruited him for only €3 million from Belgian Pro League side KV Kortrijk, the defender has undergone tremendous improvements and is now ready to step up and play football at the highest level.

Atal featured for Algeria at this summer’s Africa Cup of Nations, but following a fractured collarbone injury against Ivory Coast in the quarter-finals, he saw his tournament cruelly cut short. Until the injury sidelined him, he had been in fantastic form for his country, capping an exceptional breakthrough season at club level.

In the previous fixture, the Nice star turned in one of the best individual performances of this summer’s competition. As Djamel Belmadi’s men eased to a 3-0 victory over Guinea in the round of 16, Atal was in inspired form. He was obstinate in defensive situations, making six interceptions and three successful tackles, but equally impressive going forward, as he drove ahead and assisted his team’s third of the match, dispatched by Adam Ounas.

Displays of this quality have hardly been irregular occurrences in the past season. Atal was among Nice’s best players and benefitted from Vieria’s tactical flexibility. As the Frenchman attempted to discover a winning formula, the young defender was deployed in a multitude of roles, including at right-back, the right-hand side of a front three, and even on the left wing.

In fact, Atal’s most eye-catching display of last season arguably came in the unfamiliar role on his unpreferred flank. He lined up on the left, with the enigmatic Allan Saint-Maximin on the right, and turned in a decisive performance against EA Guingamp. He opened the scoring with an expertly-timed, weak-footed volley into the bottom corner before doubling his side’s lead with a remarkable solo run and finish. The Algerian capped a memorable performance with a third goal, marking an unlikely hat-trick, as he tapped home a cross having drifted into the box unmarked courtesy of a blind-side run.

It is Atal’s qualities in the final third that make him such an appealing prospect for the future. He utilised his close control, excellent balance and notably outstanding dribbling to good effect for Nice last season, emerging as one of the best runners with the ball in Europe. He attempted approximately eight dribbles per 90 minutes – completing half of them – and this is a trait that will undoubtedly be of interest to potential suitors across the continent.

The prerequisites for the modern-day full-back entail the ability to cope well in one-on-one situations, the tendency to vary runs infield and out to the touchline, and also the presence of mind to combine with teammates and exploit space. Atal fits these demands to a tee, and far more so than Trippier did in a typical Pochettino system.

Tottenham’s tactical approach is complex, with a multitude of pressing triggers, organisational features and preferred combinations in the final third considered. However, the intangibles are also crucial, with aspects such as confidence and bravery merely expectations of the Argentine coach. As represented by his dribbling figures, and evidenced clearly in his style of play, Atal would fit the mould of a determined, athletic full-back who is willing to push high and wide up the pitch and contribute in attacking transition for his team.

Trippier was not a player who favoured carrying the ball forward for Spurs, instead looking to drive low passes into the feet of attackers such as Harry Kane or Dele Alli and favouring lofted crosses into the box when the chances presented themselves. However, his capabilities in defensive situations, along with his credentials in attacking phases down the wing, came into question last season, and it was little surprise to see Pochettino sanction his exit from North London.

Atal’s crossing is not yet of an elite level, but this is not to say that the Algerian is incapable, and with more proficient attackers around him, he could find himself assisting goals more regularly. This is a consequence of a direct stylistic difference between him and Trippier; the former is a flexible runner, drifting infield more regularly, often even finding himself in the opposing box, whereas the latter ensures that he is the spare man out on the touchline, allowing him more time to execute crosses into the box accurately.

Having worked high up the pitch under Vieira, irrespective of which position he occupied, Atal has the experience of operating as a lone figure on the flank. Pochettino is known to favour a front three with two creative attackers flanking Kane, with a back three also favoured. This provides an onus on the wing-backs to push into advanced areas, fashioning one-on-one situations on the flanks. Trippier was not especially adept at beating his man or even exercising quick combination play with his surrounding players to move around his marker, but this is where the Nice star thrives.

Atal regularly made third-man runs in 2018/19, bursting beyond the opponents’ last line of defence to either shadow his teammates’ runs or latch onto through balls in behind. In Pochettino’s system, the likes of Alli and Heung-min Son occupy halfspaces, and in turn, aim to create passing sequences with the nearest full-back and central midfielder. While Trippier was not reluctant, as such, to burst forward, but noticeably limited as he does not possess outstanding athletic qualities, the Algeria international would be a perfect suit given his technical ability, dynamism and eagerness to play the ball quickly.

Such desire to speed play up can work both for and against Atal. He can occasionally rush his passes, ergo surrendering possession a little too easily, but the benefits of this urgency prevailed last season, as he frequently took up positions in advanced areas after distributing the ball, positioning himself well to counter-press when necessary. Pochettino is an admirer of this quality in his full-backs; players with the intelligence to anticipate their teammates’ actions, along with the knowledge of when to activate pressing triggers, are invaluable to the Spurs boss.

Tottenham do not press quite as intensely as they once did under the former Southampton manager, but they do still initiate rapid bursts off the ball in advanced areas of the pitch. The team – including the wing-backs – aim to cut off passing lanes while ensuring that the ball carrier is left with little time to play a pass accurately. Atal fits this requirement well given his speciality in aggressively intercepting opposing players’ attempts at progressive passes, as well as his relentlessly energetic approach out of possession. He may need to refine his decision-making, regarding exactly when to time his pressing, if he were to arrive in the Premier League, but his reading of the game would likely result in a near-seamless adaptation.

Upon the retrieval of the ball high up the pitch, Atal regularly seeks to exploit space in behind disorganised defences. He favoured one-twos with the closest midfielder to him at Nice throughout last season, hoping to draw defenders out to his initial move infield, before accelerating into the gaps between the opposition back-line, making penetrative runs.

In defensive situations, too, Atal is certainly no liability. With the emphasis placed upon full-backs’ usefulness in the final third in today’s game, the traditional job of keeping opposing wingers quiet is often overlooked. However, having completed 2.7 tackles per 90 minutes in Ligue 1 for Nice, the defender was solid. He tucked inside close to central defenders when necessary, made excellent recovery challenges, and performed with determination and drive as well as style.

As is often portrayed by his exuberance and erratic movements towards the ball, the former Kortrijk man is by no means the finished article. However, at 23-years-old, he represents an exceptional, long-term option for potential suitors such as Tottenham, who are in need of a new right-sided defender having afforded Trippier the chance to revitalise himself elsewhere. Not to mention, Atal is five years younger than the new Atlético signing – nowhere near his peak just yet – and with an undoubtedly higher ceiling.

The Premier League season is just weeks away, and time is running out for Spurs. Mauricio Pochettino needs to add a quality option to the right-hand side of the pitch, and Daniel Levy may have to dig deep into his pockets once again. Youcef Atal, OGC Nice’s classy, confident and exciting full-back, would be the perfect addition.