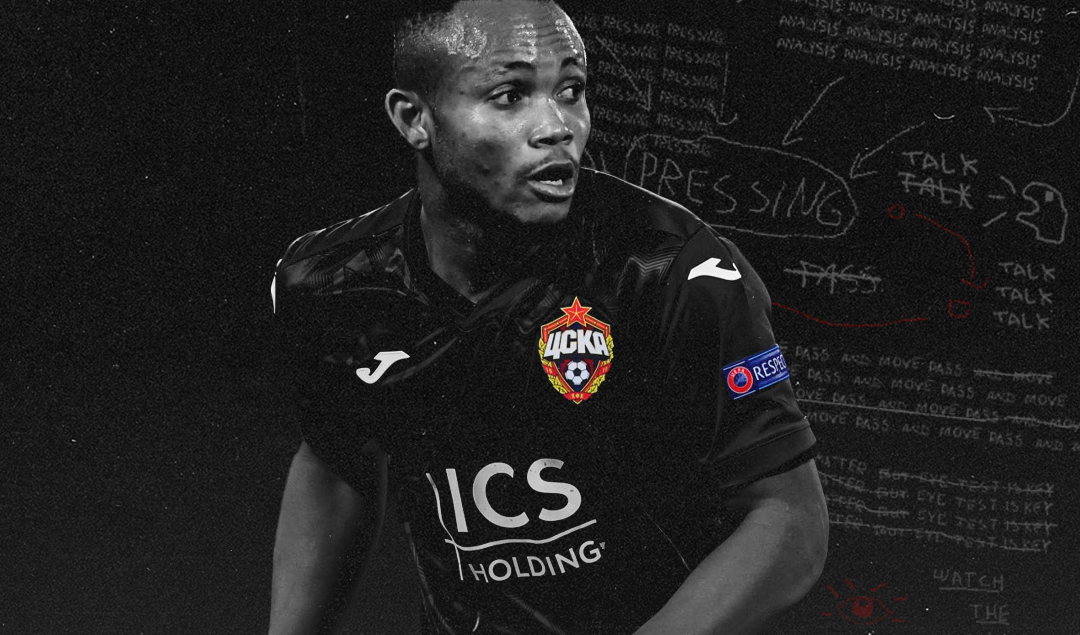 2019/20 was Chidera Ejuke’s breakout season in European football, Heerenveen paid €2 million to sign him from Norwegian giants Vålerenga in what turned out to be a profitable deal for all involved. The Nigerian winger quickly established himself as Heerenveen’s best player, his impressive performances backed up with his 10 goals and 6 assists in all competitions put Chidera on the radar of bigger European clubs.

He joined CSKA Moscow in the summer transfer window for €11.5 million after a one-and-done in the Netherlands, and many expected Russia to be the next step in Ejuke’s development but that hasn’t quite happened so far. He’s been playing well for CSKA, pretty much a guaranteed starter now but it’s still underwhelming. Perhaps adjusting to a new league and country played a part, but a player of his quality should have more than 3 goals and 2 assists in 29 games so far.

Ejuke is a gifted footballer, a winger blessed with flair, pace and dribbling ability, whocan terrorise any full-back in the world on his day. The issue is, “his day” doesn’t come very frequently, some times he’s a world-beater with genuine world-class potential, other times he’s a pedestrian letting the game just go by him without really having any impact.

The 23-year-old is plagued with inconsistency. He last scored in consecutive matches in July 2019 for Vålerenga; 2 straight games on the scoresheet is the best streak he’s managed so far and even that has only happened 3 separate times in his career. That was acceptable early in his career but not anymore, now 23 years old at the start of a 4-year deal in Moscow, Chidera must add end product to his game if he intends to attract attention from the top 5 leagues.

His first goal for CSKA came in the Moscow derby against Spartak after coming off the bench in what was only his 2nd game for the club, he fired in to secure a 3-1 win. The goal stands out because of Ejuke’s execution, he took the ball in a crowded box, beat his marker with a simple but quick feint and fired it low and hard into the far corner.

Chidera Ejuke has arrived. First CSKA goal under his belt to seal the Moscow Derby. pic.twitter.com/677GHYg3MI

The goal represents everything Ejuke should emulate to achieve on a consistent basis, he was sharp and decisive in that moment while still maintaining his skillful approach. The Nigerian normally tends to showboat and take his time on the ball before shooting, which is the main reason his stats aren’t as great as they should be. When he does shoot, he does so with beautiful technique, curling home from the left after cutting in on his right foot could become his trademark like Phillipe Coutinho if he can do it with more consistency.

Another attribute of his that has helped Chidera Ejuke cement his place in the CSKA Moscow team is his work rate. He’s not one to idly stand about while his team is out of possession, he chases back and leaves everything on the pitch. Ejuke also offers flexibility, his ability to play multiple positions across the forward line makes him an asset. Primarily a left winger but he’s featured competently on the right side and down the middle in the past.

The word that best describes Ejuke right now is ‘Potential’, he’s already a good player as it is and has what it takes to become even better but he needs to improve his game exponentially to become a top player. He’s only been called up to the Nigerian national team 4 times, making 2 appearances, both off the bench in the final 12 minutes of games against Tunisia and Sierra Leone.

Four years after leaving Nigeria for Europe, Chidera Ejuke is settling into his third new league, a physically challenging competition that takes a while to adjust to. The 23-year-old still needs to improve in terms of consistency and end product, but with time, he may just find himself leading CSKA to their first league title since 2018 and end Zenit’s dominance next season.