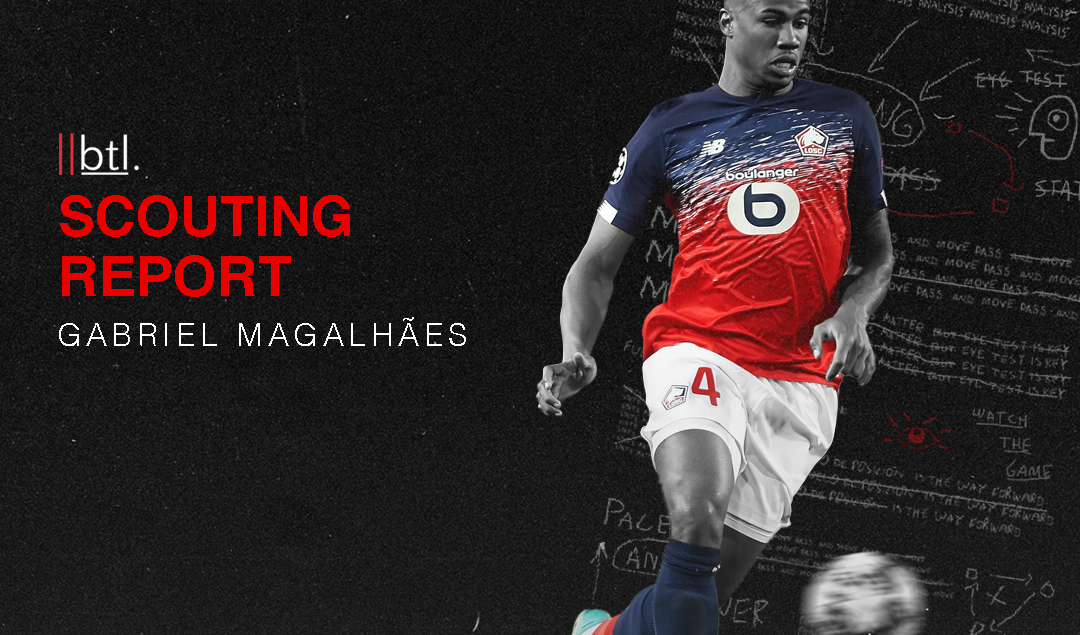 At 22 years old, Gabriel Magalhães has emerged into one of the brightest defensive prospects in Ligue 1, forming a solid pairing alongside Portuguese veteran José Fonte in the heart of Lille’s defense. The Brazilian has been linked to a plethora of clubs such as Arsenal, Everton, Inter, Paris Saint-Germain and Napoli.

The most recent transfer rumor arrived on Saturday, with the Daily Record‘s Duncan Castles reporting that Manchester United are keen to sign the Brazilian center back, as manager Ole Gunnar Solskjaer eyes a new defensive partner for Harry Maguire. Napoli have reportedly agreed terms with him already, so if United want to sign Gabriel — who is valued at £25 million — they’ll have to act fast.

But just how good is Gabriel, and would he be a successful partner for the most expensive defender of all time?

When we analyze a ball-playing centre back, we want him to tick a certain amount of boxes. A ball-playing centre back needs to relieve pressure off his defensive line by driving forward with the ball at his feet, but also be able to break lines with his passing. Whilst Gabriel doesn’t tick all the boxes yet, he has shown promising signs so far.

He averages 62.8 attempted passes per 90 with a successful rate of 84.3%, but his best asset is his ability to ping balls over the top. When playing long balls (of which he has a 72.3% accuracy), Gabriel breaks multiple lines of play and delivers the ball to dangerous areas. He is also able to switch the play from left to right which is a very useful asset for a top side.

In the below example, Gabriel plays a long ball which ends up into his opponent’s feet. However, the Ajax player didn’t clear the ball as his pass was hard to deal with, Lille midfielder Yusuf Yazıcı recovers the ball, leading to a chance on goal.

When we look at his ball-progression stats, we can see that Gabriel is a more complete player than both Maguire and Victor Lindelöf, as he can progress the ball via not only his passing, but his dribbling as well.

However, it should be remembered that he still has work to do in both areas. This is also shown on the scatter plot below, as the Brazilian finds himself in the middle for both metrics.

As always though, the data test must be accompanied by the eye test. Gabriel is able to hit long balls to break multiple lines, but if he wants to be a complete ball-playing centre-back, he also needs to break the lines by hitting accurate ground balls.

Below, we can see two different situations. On the first one, Gabriel is able to progress the ball centrally and breaks two lines whilst doing so. However, this is a very rare occurrence.

Gabriel can break lines with his ground passing, but he doesn’t do enough, perhaps due to a lack of confidence or a message from his manager Christophe Galtier to not play such risky passes. However, this can improve with experience.

He would rather give the ball to his full-backs instead of passing it centrally, as shown on the second image below. Indeed, while he could pass it to Boubakary Soumaré who is free in the middle of the pitch, he decides to pass it to left back Domagoj Bradarić.

All in all, we can say that Gabriel still needs to refine his skills before he can be multi-dimensional asset in possession for his team.

However, he is on the right path, having already shown promising signs this season, and his unique ability to ping accurate long balls would be a great asset for United’s defense.

The Brazilian has a rather impressive build, standing at 190 cm. Despite this strong build, he is still very fast, even more so for a centre back, and his speed allows him to catch up forwards who get in behind.

His speed is his second-best asset after his ability to ping long balls. Below, he does a great job of covering depth as he outpaces and outmuscles Toulouse forward Aaron Leya Iseka.

On the scatter plot below where I took the highest rated centre-backs in Europe this season and added United’s centre-back pairing, and once again, Gabriel appears as one of the most complete centre backs around.

He is also a good defender when it comes to cutting passing lanes in the box, as he knows how to read the game when there is less space to cover. As highlighted below, he shrewdly cuts the passing lane to prevent an easy chance for his opponent.

Gabriel is tasked with being the passive centre-back within Lille’ setup, but he comes deep too soon, and Lille are not able to sustain pressure in their own half because of this.

His timing isn’t great, and since he is the first Lille defender at moving from his initial position when in the defensive phase, his teammates are following him deeper. Lille’s opponents pin them back in their own half, and Gabriel’s positioning doesn’t help Lille’s defensive line in being more aggressive.

On the first picture, he already decides to come deeper to follow his closest man even though Hakim Ziyech is still far away from Lille’s goal. On the second image below, we can see that by coming too deep, Gabriel allowed space for Ziyech to pass the ball into the penalty area, and this created a chance for Ajax.

He also has to improve his spatial awareness as he doesn’t always know where his opponent is. In the example against Ajax, he forgets his opponent in his blind side, something he has done more than once this season.

This is a weakness that other clubs will easily spot and they will try to exploit it by sending in crosses from the half spaces, as highlighted below.

Gabriel also needs to improve his reading of the game higher up the pitch, as his errors in anticipating the path of the ball as well as his positioning in advanced areas can cause his team to lose their defensive stability.

Below, Tammy Abraham drags him out wide, although Gabriel should’ve rather stayed narrow to intercept the ball. Instead, he allows Mason Mount far too much space inside to exploit.

All in all, Gabriel’s profile is still hard to discern. Indeed, he has work to do in order to not be caught too high, but he finds himself too deep when he is tasked to be more passive.

At 22 years old, he still has to improve in this sense in order to become a world-class defender, but his physical build and explosiveness will put him above the rest once he will improve his defensive game.

Why Would Gabriel Be Valuable to United?

Maguire has been played as a left-sided centre-back this season alongside Lindelöf, with Aaron-Wan Bissaka and Luke Shaw patrolling the flanks from the right back and left back positions, respectively.

While both Maguire and Lindelöf don’t record a lot of pressures per game (around six pressures per 90 minutes), the Englishman has been ranked in the 76th percentile for centre backs who are least efficient in the tackle.

Adding to this, Maguire is often not covered by Shaw on the counter, which exposes him due to his slow turn and recovery pace, as seen below.

On the offensive side, Maguire has seen his amount of progressive passes cut in half this season compared to the 2018/19 campaign when he was at Leicester City. While Maguire and Lindelöf are respectively at 2.89 and 2.78 progressive passes per 90 minutes this season, Gabriel surpasses both of them at 4.31.

With Solskjaer reportedly looking for a left-footed centre back capable of building play from deep, Gabriel seems to be a significant upgrade in this regard.

Indeed, Gabriel will allow Maguire to shift over to the right, where his lack of pace will be compensated for by Wan-Bissaka playing on his side, whose impressive recovery speed and 1v1 tackling ability has the potential to mask Maguire’s defensive flaws.

One thing to keep in mind when analyzing Gabriel’s potential is the fact that this is his breakout season, and he doesn’t have that much experience facing off against elite opposition. Having developed at Avaí Futebol Club, Gabriel joined Lille shortly after his 19th birthday, with Lille paying £1.5 million for his services.

However, he struggled for playing time behind the pecking order of Adama Soumaoro, Marko Baša and Júnior Alonso, and was shipped out on loan to newly relegated Troyes. Once again, he found minutes hard to come by under Jean-Louis Garcia, and returned from his loan in January before being sent on loan to Dinamo Zagreb. 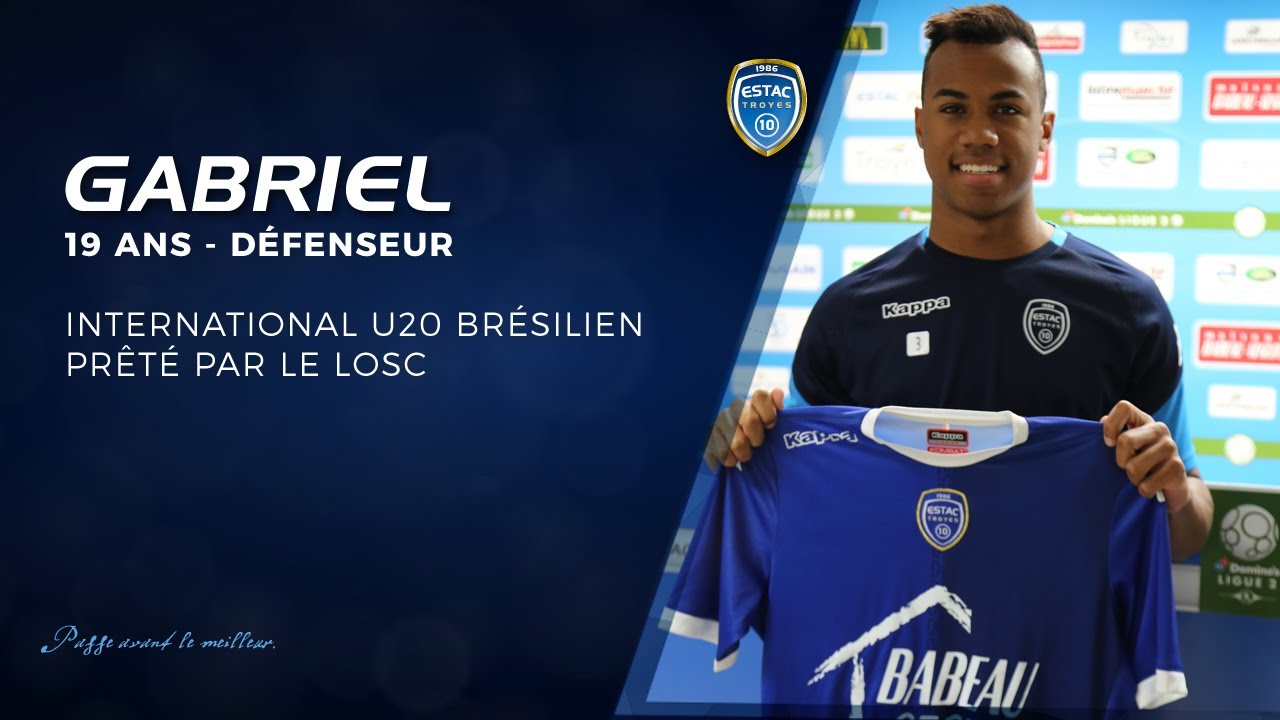 He didn’t fare any better in Croatia, making just one appearance for the first team whilst mostly playing with Dinamo Zagreb’s B side in the second tier.

Gabriel returned Lille in the summer of 2018 and mostly found himself on the bench, before making his first Ligue 1 start on February 10 against Guingamp, replacing the suspended Soumaoro. Lille went on to win 2-0, and would go on to finish second in the league, clinching qualification to next season’s UEFA Champions League group stage.

Moreover, the Brazilian’s luck began to change from that point on. He made five consecutive starts in Ligue 1, conceding just two goals in the process. However, he was caught napping in the final minute against Monaco, with Carlos Vinícius scoring a last gasp winner to take all three points.

Galtier benched him for the new two matches, but he returned to action against Paris Saint-Germain, replacing the injured Soumaoro. He entered the match at the end of the second half, with Lille drawing to the eventual champions. By the time the match was over, Lille had won 5-1, with Gabriel heading in the fourth goal.

Since that point, Gabriel has forged an unbreakable partnership with Fonte in the heart of defense, causing Soumaoro to depart for Bologna in January in search of regular minutes. However, with Europe’s top sides swooping in for the Brazilian’s signature, it’s likely that he won’t be at the club anymore by the time Les Dogues play their first official match on August 22.

Gabriel still needs to improve in key areas such as his confidence to break lines with his ground passes or reading of the game, but with his remarkable physical attributes combined with his pinpoint long balls, he is the ideal defensive signing for Manchester United to partner Maguire. Moreover, his relatively cheap asking price of £25 million will allow United to focus their funds on other pressing needs without dedicating too much of their budget to fixing their defense.