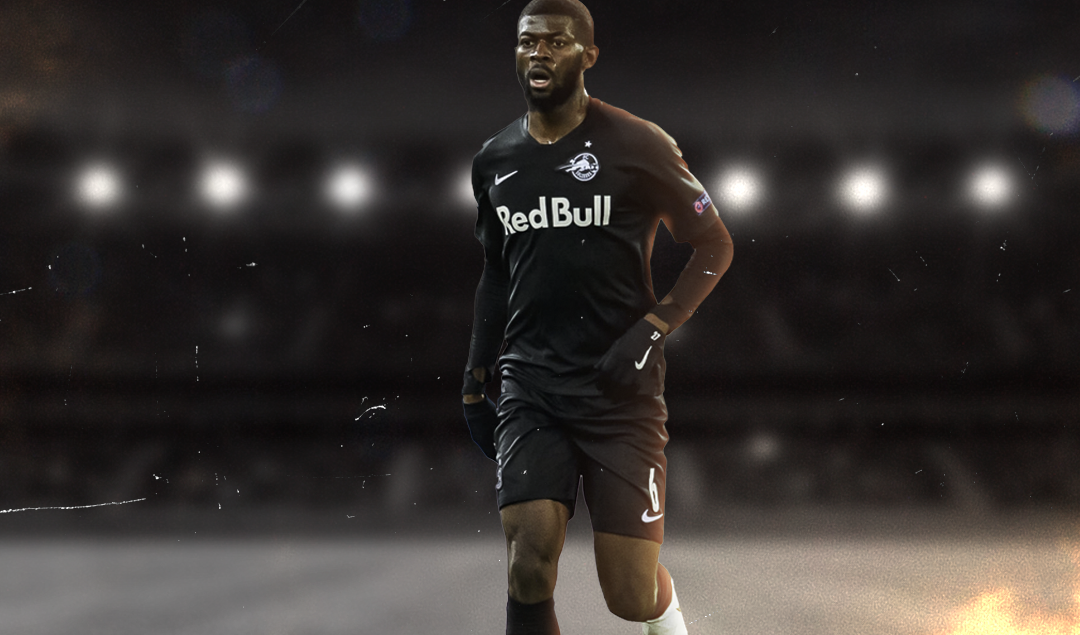 The Red Bull Salzburg production line shows no signs of slowing down. The Austrian Bundesliga side are the market experts in buying young, talented players from lesser-scouted regions and selling them on to teams in the so-called ‘Big Five’ leagues for a hefty profit. The German Bundesliga alone has seen an influx of nine Salzburg players over the last two summer transfer windows and it would be reasonable to assume this summer will see a few more follow suit.

One strong candidate is Jérôme Onguéné, the 22-year-old Cameroonian centre-back who came through the ranks at French side FC Sochaux-Montbéliard before arriving in Austria via a six-month spell in Germany with VfB Stuttgart. He has become a key part of Jesse Marsch’s side in a season that has featured a memorable Champions League campaign and a serious threat to their league dominance from LASK Linz.

Onguéné tends to go under the radar at times as the style of play that has become synonymous with Salzburg and the Red Bull football brand in general does not always reserve praise for the defence, with the focus instead on pressing high up the pitch and attacking with speed. This can leave the defence overexposed when possession is lost, as reflected in the 26 goals conceded from 22 league games this season.

Onguéné has been used as a right and left-sided central defender, as well as part of a back three, as Jesse Marsch has experimented with both a 5–3–2 and 4–2–2–2 formation. He is a well-rounded defender; tall, strong and quick whilst also providing a big attacking threat from set-pieces.

It is Onguéné’s athletic qualities that mark him out as a high performing defender, standing at 6’2 with long legs and an impressive turn of speed. Simply put, he is a beast in the air. He is incredibly dominant, rising high and attacking the ball aggressively to win 72% of aerial duels in the Austrian Bundesliga this season. He closes down angles well, limiting attackers’ options and smothering them in possession. He has only been dribbled past 0.3 times per 90 minutes and averages 2.2 interceptions, showing it is very difficult to evade him under pressure.

His speed is very important to this Salzburg side who like to defend high up the pitch, allowing him to recover lost ground and keep up with pacy attacking players. This strength was not lost on Jesse Marsch, who started Onguéné in both matches versus the all-conquering Liverpool, preferring him to the long-serving André Ramalho against the likes of Mohamed Salah and Sadio Mané.

There are at times, however, question marks over his decision making as he can be sucked into a challenge in the middle of the pitch, leaving space in behind for attackers to exploit with direct passes. He can tend to switch off positionally, with André Silva’s first goal in the 2–2 draw against Frankfurt in the Europa League a prime example.

A cross came in from the left and Onguéné was caught flat-footed as Silva got in front of him at the near post and headed in. This is not uncommon for young players, with the mental side of the game still developing in a sport where one lapse in concentration can have such a big impact on the result. He does, though, possess excellent defensive qualities, often being able to out-jump, out-run or out-muscle opponents, making him an impressive centre-back option.

Onguéné registers good passing stats, completing 51.3 passes per 90 minutes in the league with an 83% success rate, often opting for a pass over dribbling out from the back. His accuracy decreases considerably to 73% when in the opposition half but that is typical with defenders when attempting more intricate and progressive passes. Virgil van Dijk, for example, enjoys an average of 89% pass accuracy in the league which decreases to 81% when in the opposition half.

The Red Bull philosophy requires the central defenders to prioritise bringing the ball down and looking for the pass as opposed to launching it long and Onguéné fits this mold well, averaging only 3.5 clearances per 90. At times this can lead to over-playing and loose passes, as reflected with Onguéné losing possession 11.3 times per 90. This could, however, be the result of a high-risk style of play combined with an aforementioned proneness to lapses in concentration rather than an obvious lack of technical ability.

Onguéné is a constant threat from set-pieces, finding space and timing his jumps well to frequently find himself on the receiving end of a corner or free-kick. He scored four goals in the league in his first season in Salzburg and three in his second, although failing to register so far this season.

He did, however, find the net in the Europa League versus Frankfurt, displaying good attacking movement and heading accuracy to fire in from a corner. He is very difficult to mark, able to make intelligent runs to the near-post for a glancing header or to use his dynamism to generate power from deep. Red Bull Salzburg are not a team short on attacking talent, with Onguéné adding another string to the bow of a side boasting impressive speed and movement in the offensive third.

At 22, Onguéné still has a lot of improving to do but has ample time and the ideal environment in which to do so. Another season at Red Bull Salzburg would be beneficial in giving him space to improve on the technical side in a league where they have enjoyed so much success, whilst testing his defensive capabilities against some of the world’s best in European competition.

Teams will surely come knocking though, with mid-table Premier League teams such as Everton, Southampton and Crystal Palace all in need of some defensive stability. The path to Red Bull Leipzig from Salzburg is a well-worn one, although with their wealth of defensive options teams such as Eintracht Frankfurt and Borussia Mönchengladbach, now managed by former Salzburg coach Marco Rose, could provide a more realistic next step.

Onguéné has the physical attributes to be an excellent defender. If he can bring his decision-making and mental aptitude up to the same level, we will see him performing regularly at the highest level. He is already a Cameroonian international and his exposure to international football will no doubt increase his confidence and leadership skills. It is now a case of making the right step at the right time to build on the promising early stages of his career.