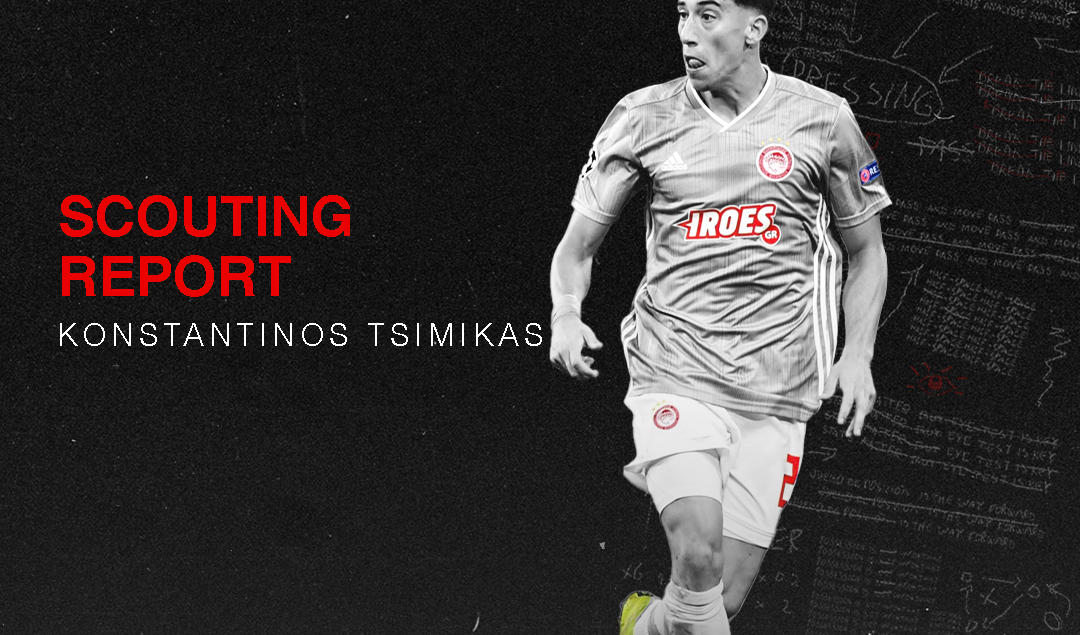 Yesterday, Konstantinos Tsimikas was announced as Liverpool’s first signing of the summer 2020 transfer window, the first ever transfer window in which the Reds have been reigning Premier League champions. Liverpool agreed to pay £11.75 million for the Olympiakos man after failing to negotiate a fee for Norwich City’s Jamal Lewis.

He’s already impressed against the likes of Bayern Munich and Arsenal in the Champions League and the Europa League this season, and he’s been brought in to provide rotation at the left back position for the consistently magnificent Andrew Robertson, but just who is Kostas Tsimikas?

Tsimikas arrived at Olympiakos from Panserraikos for €35,000 in 2014, and he didn’t take long to make an impact. He impressed in the 2014/15 UEFA Youth League for Vasilis Vouzas’s U-19 side, starting at left back as the Erythrolefki finished ahead of Juventus and Malmö before being eliminated by Shakhtar Donetsk in the Round of 16. 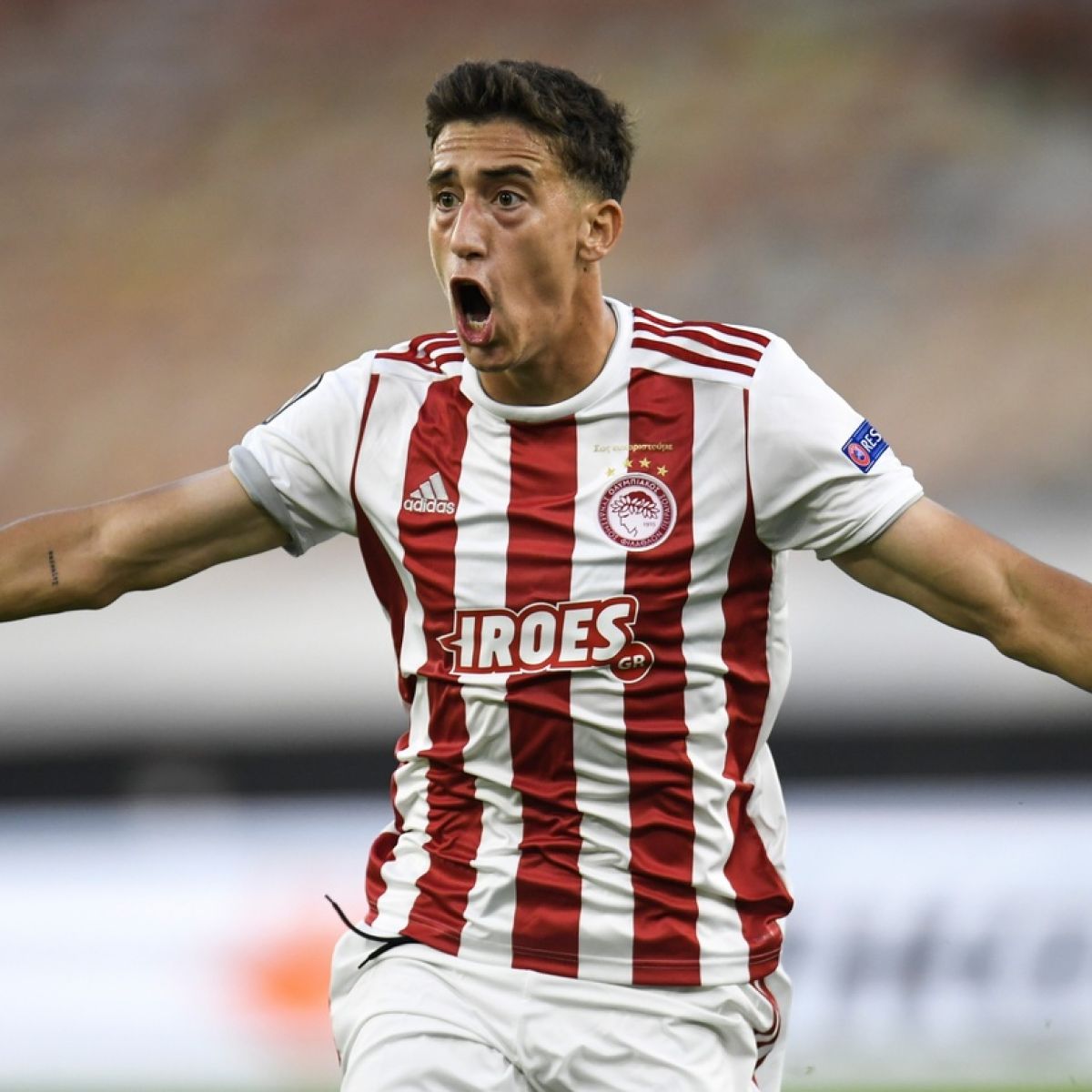 The Lefkonas native made his debut for the first team on December 19, 2015, but he would register just 11 more appearances before being loaned out to Danish Superliga side Esbjerg. It was here in Denmark that Tsimikas first gave promising signs of his attacking output, scoring 4 goals in 13 matches before returning to Olympiakos.

The following season, Tsimikas once again departed on loan, this time for the Netherlands, joining Willem II on a season-long contract. He was a regular starter in Tilburg, once again providing signs of his offensive end product with 6 goals and 4 assists.

He returned to Olympiakos in the summer of 2018, only this time, to stay. While he originally found himself on the bench in favor of Brazil-born Greek international Leonardo Koutris, Tsimikas eventually won a starting spot under manager Pedro Martins during the final weeks of the 2018/19 season.

This season, he’s become one of the first names on the team sheet for an Olympiakos side that has won its first league title since 2017, reached the Greek Cup Final, eliminated Mikel Arteta’s Arsenal from the Europa League, and taken points off the likes of Tottenham Hotspur and Bayern Munich in the Champions League.

Tsimikas is an explosive full back who can deal with both attacking transitions as well as defending against counterattacks to perfection, although at times, he puts his team in jeopardy by taking unnecessary risks in possession, and he’ll need to correct this side of the game if he is to become a success at Liverpool.

However, at 24 years of age, he’s only a year older than Robertson was when the Scot arrived at Anfield, and like Robertson, he’ll take leaps and strides both on and off the ball under the tutelage of Jürgen Klopp. 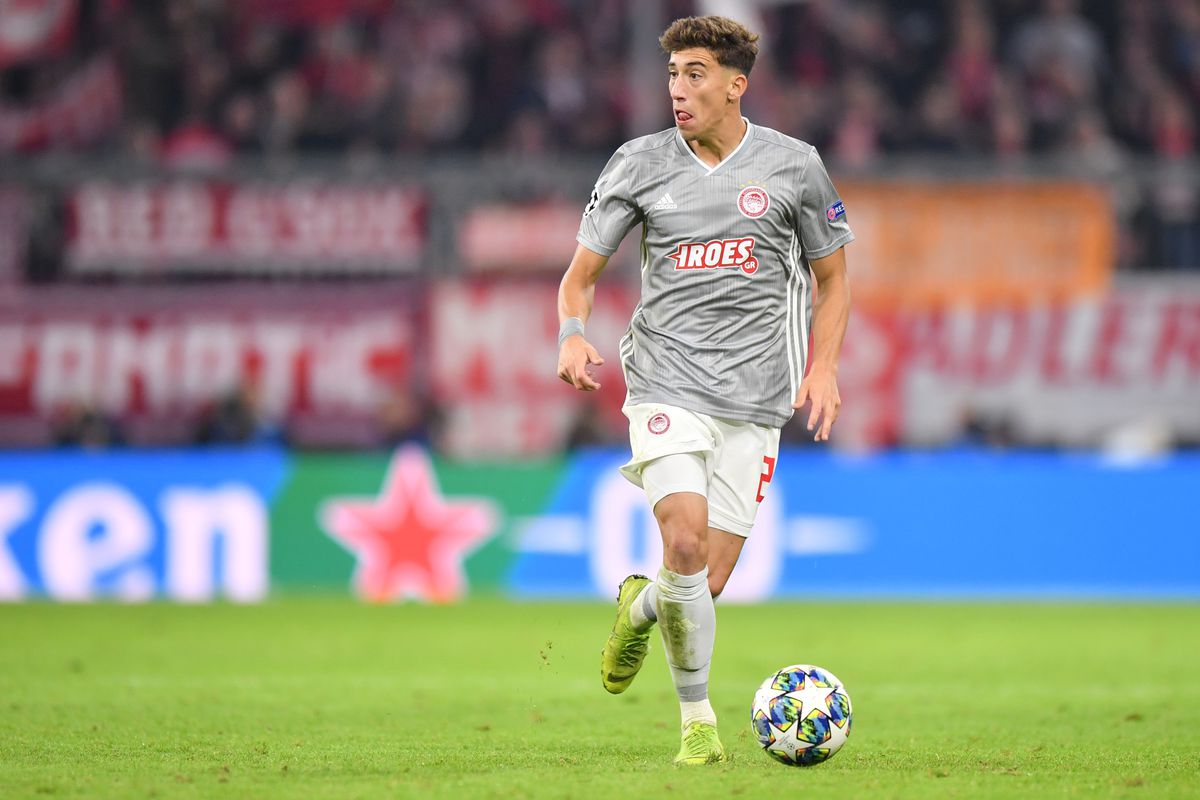 It’s easy to see what Michael Edwards and the rest of Liverpool’s recruitment department saw in the Greek left back as a Robertson backup. While he’s a fairly lanky player at 5’10” and 154 lbs, he has the speed, cunning, and vision to wreak havoc on the counter as well as pick out teammates in advanced areas.

With so much attacking panache on display, it’s easy to assume that Tsimikas neglects his defensive tasks, but he is a complete fullback and he’s improved his positional awareness this season in order to avoid making clumsy errors. Klopp has had to resort to using 34-year-old central midfielder James Milner at left back in order to relieve Robertson of his workload, but with Tsimikas, he’ll now have a natural replacement in his deck of cards.

Tsimikas’s first major test of the season came on October 22, when Bayern Munich paid a visit to the Karaiskakis Stadium. It didn’t take long for him to make his presence known; just 23 minutes into the match, he made an overlapping run down the left flank before floating an excellent cross into Youssef El-Arabi, who headed home from close range to open the scoring. He continued to wreak havoc on the left with Giorgos Masouras, making life incredibly difficult for Joshua Kimmich and Benjamin Pavard.

Moreover, he didn’t slouch on his defensive duties either. Tsimikas denied several clear-cut goalscoring oportunities with a wide range of defensive actions. He headed away a Kimmich cross that looked destined to meet Thomas Müller at the near post, he made a last-ditch block to prevent Philippe Coutinho from getting on the end of a low cross from Serge Gnabry, and each of his 10 duels. It proved insufficient for Olympiakos as the Bavarians went on to win 3-2, but Tsimikas began to be linked with a bevy of clubs ranging from Lyon, Napoli, Leicester City, and Inter.

After an impressive Champions League group stage campaign that saw him provide 16 key passes (1.7 per match), Olympiakos dropped down the Europa League after finishing third in their group behind Bayern Munich and Tottenham Hotspur, where they were drawn against Mikel Arteta’s Arsenal. The Gunners took the first leg 1-0 via a late goal from Alexandre Lacazette, but at the Emirates, it was a different story. 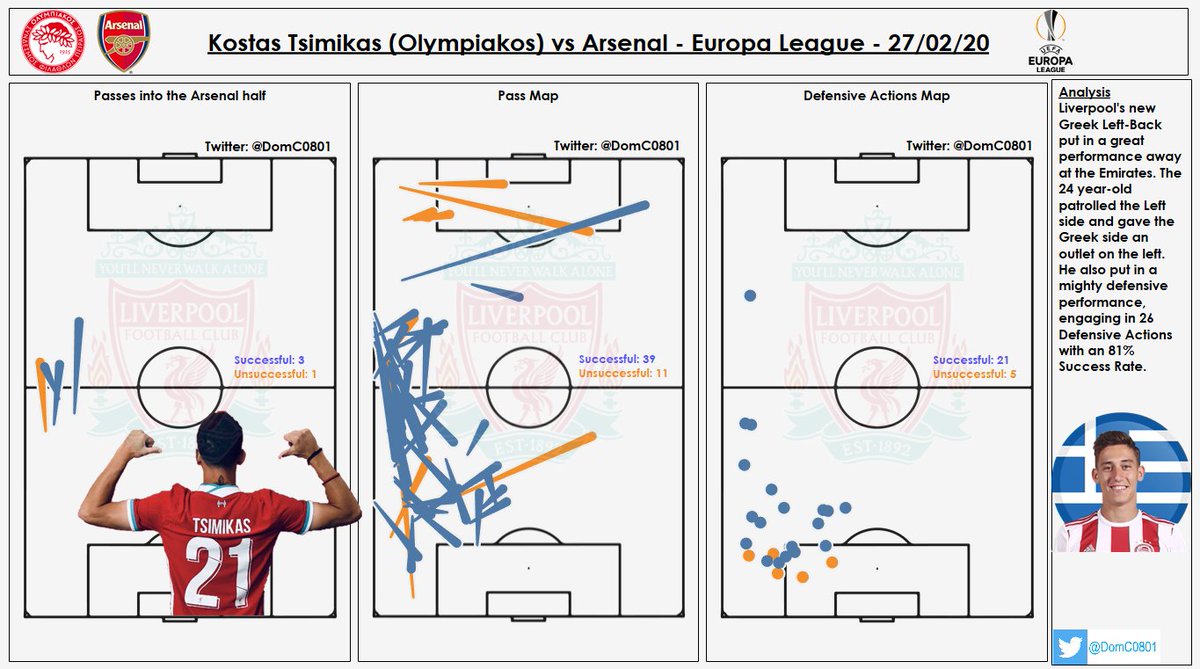 Once again, Tsimikas gave a composed performance on both ends of the pitch. In search of a decisive second goal, he cut inside from the left whilst breaking on the counter, evading Nicolas Pépé and Héctor Bellerín before firing a rocket of a shot that an outstretched Bernd Leno pushed above the bar.

Moreover, Tsimikas got the job done on the defensive side of things, winning 9 out of 14 ground duels, making two clearances and four interceptions, whilst emerging with a 81% success rate in his defensive actions.

It remains to be seen how Tsimikas will adapt to the Premier League’s demands, but for €13 million, Liverpool look to be getting an instant-made backup for Andrew Robertson.