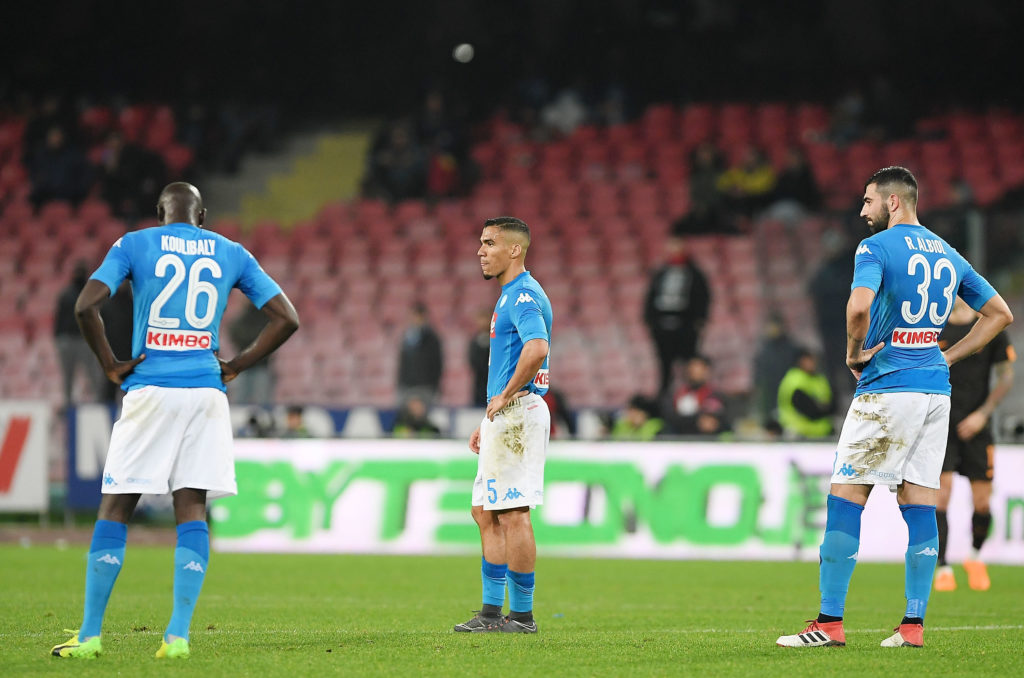 Squad Analysis
The Partenopei’s season seem to be falling apart as the President, players, coaching staff and fans are all on the edge. Can they possibly salvage their campaign in Campania?
It all started so well for Napoli, as five wins in their first seven matches gave hope to the fans that this was indeed “their year”, despite the dramatic loss to Juve away from home.Fast forward a couple of months, and what seemed like the fondation to build a successful season for the 1989 UEFA Cup winners,has since seen that fondation crumble like a pile of bricks.
The mummers began following a defeat to Roma in the always passionate Derby del Sud. Matters were made worse, when the club failed to beat both Red Bull and Genoa at home, being held to draws. Those results have left Napoli 13 points behind league leaders Juventus already with just 12 games gone. It should be remembered that during the Bianconeri’s recent dominance of Calcio, it has been Napoli that has ran them the closest, finishing second several times.
President and movie mogul Aurelio de Laurentiis may have thought he was witnessing a “bad movie” at the theatre at what was happening at his club. He instructed the players to have a “ritiro” of sorts with a week long training camp, which was unceremoniously rejected by the players.The significance of said “disobedience” of the order was the fact that it was the senior players that led the mutiny.
Club captain Lorenzo Insigne, star forward Dries Mertens and key components in the form of central midfielder Allan and winger Jose Callejon have all been listed as the leaders. Insigne being a Neapolitan has that emotional connection to the club and his relationship with De Laurentiis has reached a breaking point that will at best be difficult to repair.
It should come as no surprise to anyone who follows this sport, that when any team is going through a difficult period, it’s best players are linked with moves away. It did not take long for the four players mentioned to have potential suitors for the upcoming January transfer window.
Should that were to materialise, it would be nothing short of a disaster for the two time Scudetto winners!
Not only are a number of players being heavily linked with moves away from the club, but the manager Carlo Ancelotti’s position on the bench is on thin ice as well.”Carletto” made his feelings about the retreat public and it was definitely not what the President would had in mind, as the three times winning European Cup manager had dis-agreed with the retreat. Remember the backs to each other photo between Ancelotti and De Laurentiis that was used to announce the manager taking over the San Paolo just last year? That seems like a distant memory now…
And so now onto the fans…
They are very few, if any sports fans that are as passionate about their club as the Napoli supporters and the controversy surrounding their beloved Azzurri has caused a swift reaction from the tifosi. During training sessions, the players have been insulted, banners have been hanged outside with messages branding the players “mercenaries”, while also taking a shot at De Laurentiis saying “Only you are winning.”
These were displayed by the Ultras and whether people like them or not, they wield a heavy influence and considerable power at clubs in Calcio.It was all too evident in Napoli’s last two matches where the players were jeered while on the field and literally everytime there was a mis-pass, a chance spurned for a goal or when the defense was under pressure from the opposition, the tension created onto the players from the fans was immense.
So where does the club stand now as we speak a week before they resume their season following the international break?
The club itself have issued a press silence, there have been reports of an offer from Qatar for the five times Coppa Italia champions and Ancelotti has reportedly been given until at least the end of the Champions League group stage to repair the damage.
This current international window probably came at the best time for the club and all involved. It has allowed the players to go away with their national teams, the coach to work with the players left back without the pressure of an upcoming game, the fans to quell their anger and the President to sit in his office and think thoroughly about the best way forward for the club.
The fact still remains there is a long way to go in the season and it would be a shame if events that has happened in late October & November have such an effect that it completely destroys Napoli’s ambitions.They still can salvage their season, but it’s going to take humility, compromise and all and sundry involved to see the bigger picture.
The Stadio San Paolo will mark it’s 60th anniversary on the 6th of December and the club with such a rich history needs everyone to roll up their sleeves, get to work and give the occasion a fitting tribute.
By: Vijay Rahaman
Share:
Twitter Facebook Email LinkedIn Google+