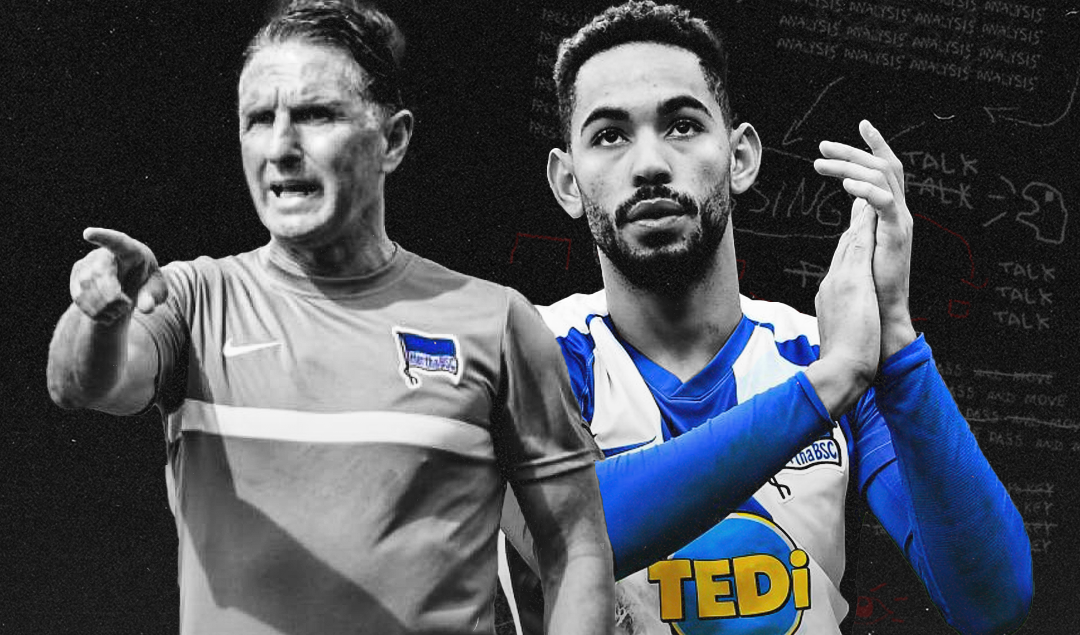 Despite a stuttering campaign last season which saw four different managers take charge of Hertha Berlin, the team from the west of Germany’s capital enjoyed a brief revival following the resumption of the Bundesliga post COVID-19 lockdown. Under new manager Bruno Labbadia, Hertha returned to action by winning three and drawing one of their first four Bundesliga matches before eventually dropping off the pace.

Whilst playing some exciting attacking football along the way, the Berlin side missed out on European football next term by just 8 points despite a dismal start to their league campaign. Spending just shy of £100 million over the past year in order to bolster their playing squad and with rumours of more spending on the horizon, next season could Hertha Berlin once again qualify for European football?

Spending £70 million in the winter transfer window at the beginning of 2020, Hertha Berlin have already begun to build expectation for their proposed return to European football in the near future. Despite many thinking in January that Hertha paid over the odds for their incoming players, there’s structure to the investment in their squad.

The four players brought to the Olympiastadion over the winter break have an average age of just 22 meaning Die Alte Dame have invested heavily in the long term. The Bundesliga side will either keep these players for the foreseeable future, improving their squad drastically in the short term or they’ll potentially make profit from these signings over the next few seasons.

Either way, with the big money arrivals of Krzysztof Piątek, Matheus Cunha and Lucas Tousart, who was sent immediately back to Lyon on loan, Hertha have now signaled their intent to the rest of the Bundesliga that they mean business. 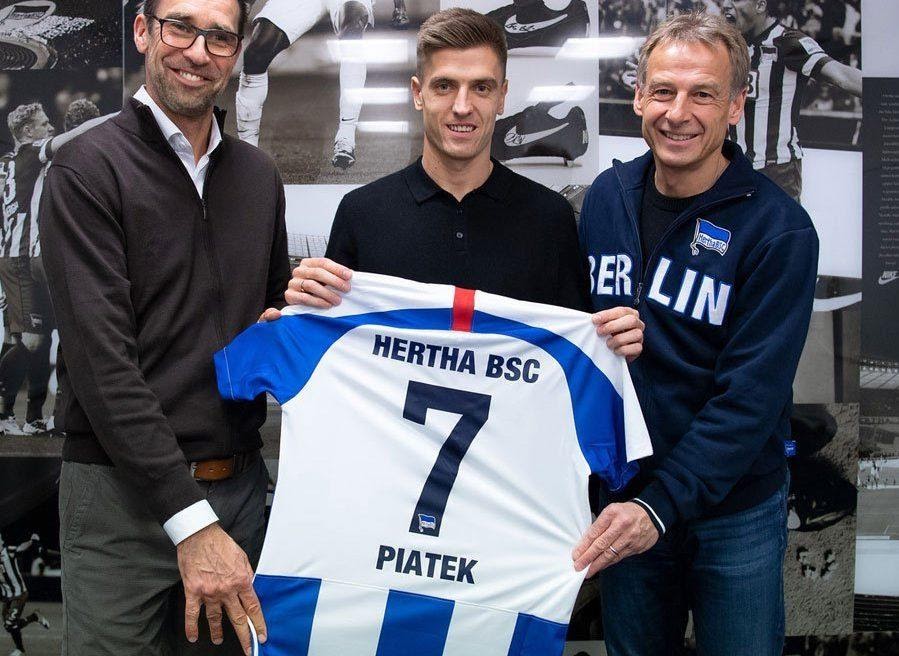 Starting the 2019-20 Bundesliga campaign under the tutelage of Croatian manager Ante Čović, it would be an understatement to call Hertha’s season a disappointment. With many pundits tipping them for a top eight finish at a minimum, the Berliners’ start to the campaign was dismal. Amassing just three wins from their first 14 German top-flight matches, Hertha struggled to assert their identity in matches during the early part of the season.

On the pitch, Čović regularly switched formation, moving on an almost game by game basis from back three systems to back four and as a result his team lacked any sort of identity. On five occasions the Croatian oversaw his team concede three or more goals in league matches. With his side languishing towards the relegation places, his tenure was halted in November and German national team legend Jürgen Klinsmann was installed as the new manager.

Hertha enjoyed a brief bounce and revival under his management. Despite a 2-1 home loss to Borussia Dortmund in his first match in charge, Klinsmann then saw his side go four unbeaten, including a big away win at Bayer Leverkusen, heading into the domestic winter break.

Klinsmann had Hertha playing some lovely football and the club’s fortunes looked to have positively changed, but following a 3-1 home loss to lowly Mainz and exit from the DFB-Pokal to Schalke in the same week, he left the club with immediate effect much to everyone’s surprise.

Following a short spell with interim boss Alexander Nouri in charge, veteran Bundesliga manager Bruno Labbadia joined Hertha Berlin as manager during the halt of the German top-flight due to the COVID-19 outbreak. For many teams, the halt of play had been damning, but for Hertha and Labbadia, it came as the perfect time. 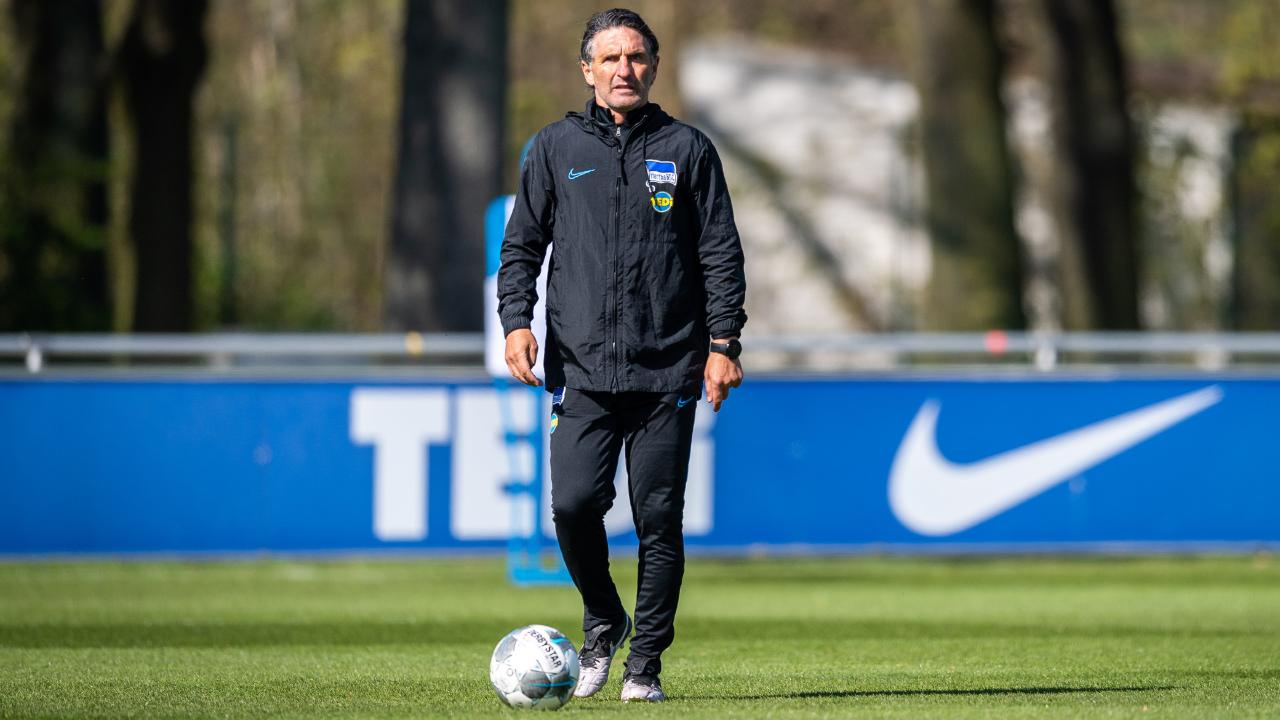 With new signings still bedding into the squad, the seasoned gaffer was able to use the break to gel his squad together in training and to implement a system that made them difficult to beat in the last eight matches of the 19-20 Bundesliga campaign. The change of Hertha’s system by Labbadia to possession-based play across the defence mixed with their lightning fast counter-attacks made them one of the more exciting teams to watch during the Bundesliga restart.

Adopting the 4-2-3-1 as his main formation, Labbadia made a flying start as Hertha boss. Much like Klinsmann previously, Die Alte Dame mustered up three wins and one draw in Labbadia’s first four matches in charge and despite losing four of the last five matches of the domestic season, those losses were much closer and hard-fought than previous, apart from in a 4-1 loss at home to Eintracht Frankfurt.

In his short spell to date with Hertha, Labbadia has also gotten the best out of new Brazilian striker Matheus Cunha who managed five goals and two assists in 11 matches with Hertha after his move from RB Leipzig. If Labbadia can further add to the first team squad at the Olympiastadion in his own way, he could make Hertha a force in the Bundesliga next season.

Where Do Hertha Need to Improve for Next Season

Recruitment for the 20-21 Bundesliga campaign has already begun. Goalkeeper Alexander Schwolow joined last week from SC Freiburg for a fee of around £7 million. Schwolow enjoyed arguably his best season in professional football last term and at the age of 28, the German shot stopper will become Hertha’s number one between the sticks when 35-year-old Rune Jarstein retires in the near future. 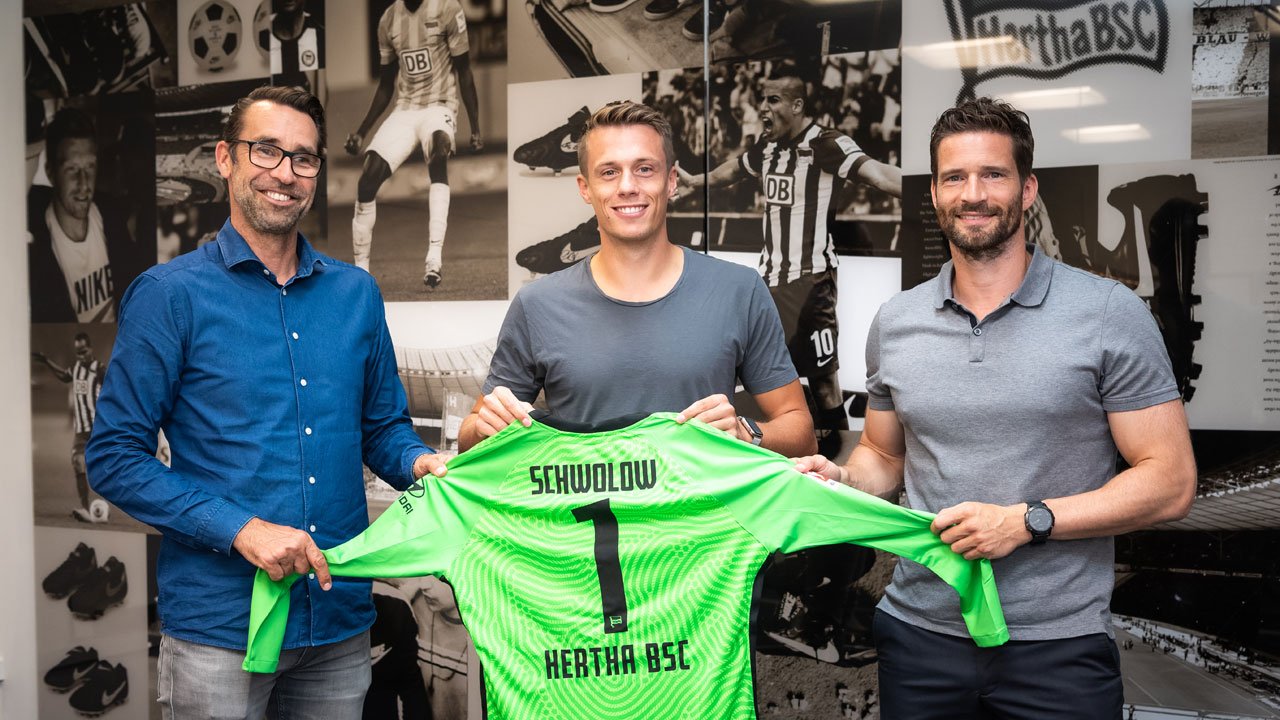 Schwolow is the club’s only acquisition to date this early on in the shortened summer transfer window, but Lucas Tousart has also joined up with his new Hertha teammates after returning from his loan spell with Lyon. The strongest rumour to date this summer is the likely permanent return of midfielder Marko Grujić from Liverpool who could prove to be another great signing for Hertha.

Regardless of any more incoming transfers though, it’s the players that Hertha already have in their squad that could push them onto European qualification next season. Not only have Hertha now invested in some real quality players over the past season or so but the squad depth they have is also strong and important.

The club’s central midfield in particular, especially after the capture of Tousart, is very strong and if a deal can be done with Liverpool to bring Grujić back permanently, it will only get stronger. A midfield three of Niklas Stark, Tousart and Vladimir Darida could prove to be one of the strongest in Germany next term if all three can play to their highest level.

Whilst Stark can break up the play through the middle of the field, Tousart is expected by many to come in and play as the ‘deep-lying playmaker’ alongside the once capped German international. Tousart enjoyed another really solid season with his boyhood club Lyon this term. With a pass completion rate of 85.4% last term, the French midfielder instantly becomes Hertha’s best passer upon joining the German side and his vision could prove to be the missing detail in Labbadia’s midfield.

Partnering them two through the middle, Darida would operate as an attacking ‘box-to-box’ midfielder linking the attack to the midfield and now a year older, his experience is becoming vital for Hertha. 18-year-old Lazar Samardžić will also likely be used in that attacking midfielder position if he stays with the club as interest from English side Chelsea and Italian giants AC Milan grows. 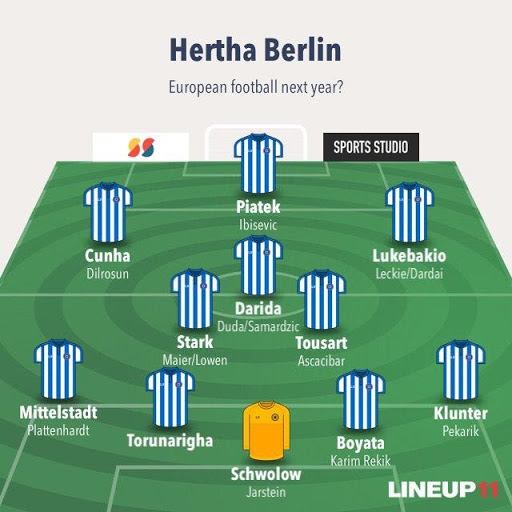 As you can see below with the club’s first team squad depth chart, not including some youth players, the biggest area Hertha need to address comes at centre back. Even though Stark can provide cover in this position, Hertha only really have three natural central defenders to pick from. Dedryck Boyata enjoyed a solid campaign last season after joining from Celtic whilst 22-year-old Jordan Torunarigha continued to impress with some very assured performances.

In terms of depth at centre back Hertha have former Manchester City and Marseille defender Karim Rekik but with him yet to make an appearance under Labbadia, his future looks limited with Die Alte Dame. Even if Rekik is given a chance next term, Labbadia must go out and find a suitable central defender to join his club. There’s been few names mentioned to date in terms of rumours but a move for Malang Sarr of Nice or closer to home, a player like Robin Koch from Freiburg could prove an inspired choice for the Berlin side.

Elsewhere on the pitch, Hertha’s depth at both full-backs is strong especially given that the club are supposedly close to bringing right-back Deyovaisio Zeefuik to the club from Dutch side FC Groningen. The club could perhaps invest in another left winger however that should not prove too vital if not addressed however with Vedad Ibišević a year older up top, there could be a need to bring in a top class second striker this summer.

That could become a worry if Cunha swaps Berlin for Paris to join PSG this summer with rumours of a possible £50 million switch being circulated as of late. If Cunha stays this summer and Hertha don’t lose any key members of their first team squad, it could only take a few minor tweaks and transfers to push the club on towards European qualification next term.

The Future Is Bright for Hertha

With a plethora of young talent knocking on the door of Labbadia’s first team squad, Hertha have seen their academy start to produce some top-class talent over recent seasons. The academy, where Jérôme and Kevin-Prince Boateng started their careers amongst others, has enjoyed some steady growth over the past few years across all age groups. This season in particular has seen the club’s youth sides thrive. 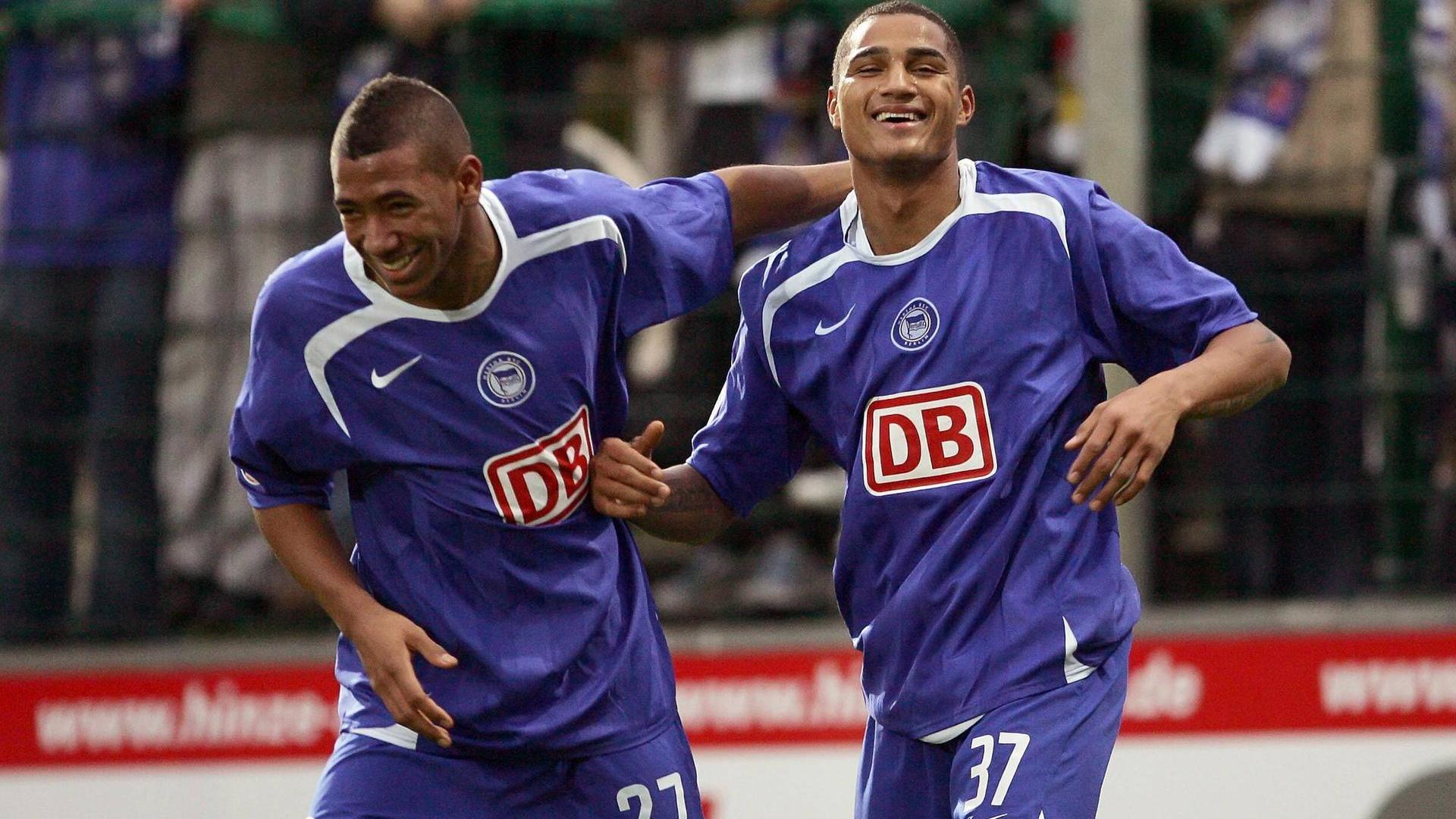 Hertha Berlin’s U23 side finished 4th in the Regionalliga Nordost whilst every youth team down to the U9 side finished in the top four of their respective leagues. The club prides itself on bringing young local talent into the first team at the Olympiastadion and that’s something academy manager Benjamin Weber believes is incredibly important.

“Working with the youth is one of the most important building blocks of the DNA of the club. This is what we’re working towards in the academy, that we bring the players to the first team. Currently about 13 players from the youth academy programme are in the main squad, three are in the starting team.

Players won’t be pressed into one system. We educate them in playing football, not only in the high press like RB Leipzig but being able to play different systems. That’s our DNA, to have flexible players who can adapt to different styles of play and situations on the pitch, who can identify with the club.”

Since the academy opened its doors in 2001, over 70 players from the club’s youth set-up have played minutes for Hertha’s first team. The club’s connection with the local area doesn’t just include players though, most coaches in the club’s youth academy also hold strong ties with the club, many having played for Hertha during their own professional careers. It’s hoped that the added bonus of the connection between a young player, the local area and his local team is enough to drive on his development quicker and stronger.

It only takes one look at Hertha’s first team squad to see the club’s ties to the city are still present and important. Arne Maier, Torunarigha, Maximilian Mittelstädt, Samardžić, Palko Dardai (son of former Hertha coach Pal Dardai) and Jessic Ngankam all made appearances for the first team this season and were all born either in Berlin or surrounding areas and cities.

Without a German championship since 1931, there’s a real hope that this connection between Hertha and the city she lives in can be enough to push the Berlin-based club upwards over the coming decades.