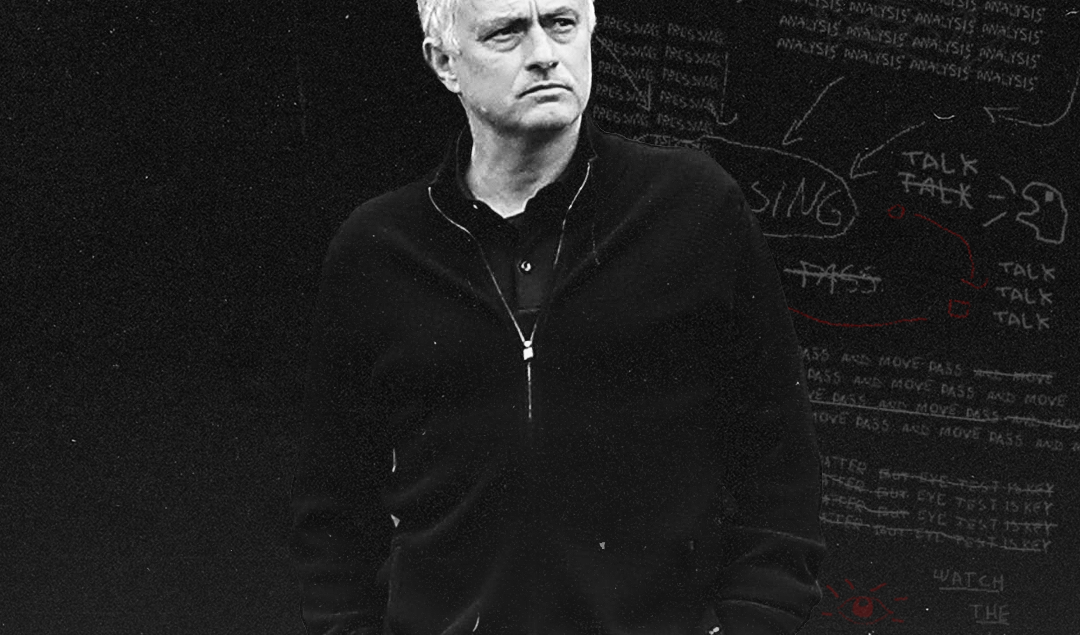 I am quite a bookworm and have been reading a lot recently, two of the books I enjoyed are The European Game by Daniel Fieldsend and The Barcelona Legacy by Jonathan Wilson. Both books mention the ever-controversial Jose Mourinho and his chosen method of training, known as Tactical Periodisation.

What is Tactical Periodisation? It is a training methodology developed by Sports Scientist Vitor Frade about 30-35 years ago, (as a football coach myself I was aware of the basis and ideas behind the method but have really delved into it recently to develop my knowledge and understanding).

The methodology has since gone on to be used most famously by Mourinho but does have other subscribers such as Brendan Rogers, Nuno Espirito Santo, and Andre Villas-Boas to name a few. So, the idea is that the Tactical Element of the game is the overarching element that is the most important while the other three elements; Physical, Psychological and Technical should be trained in a way that compliments/reinforces the tactical aspect.

A separate session for tactics would take place, meaning players would get an overview of how the coach wanted them to play but would not have had the training sessions to teach them how to implement this in-game. 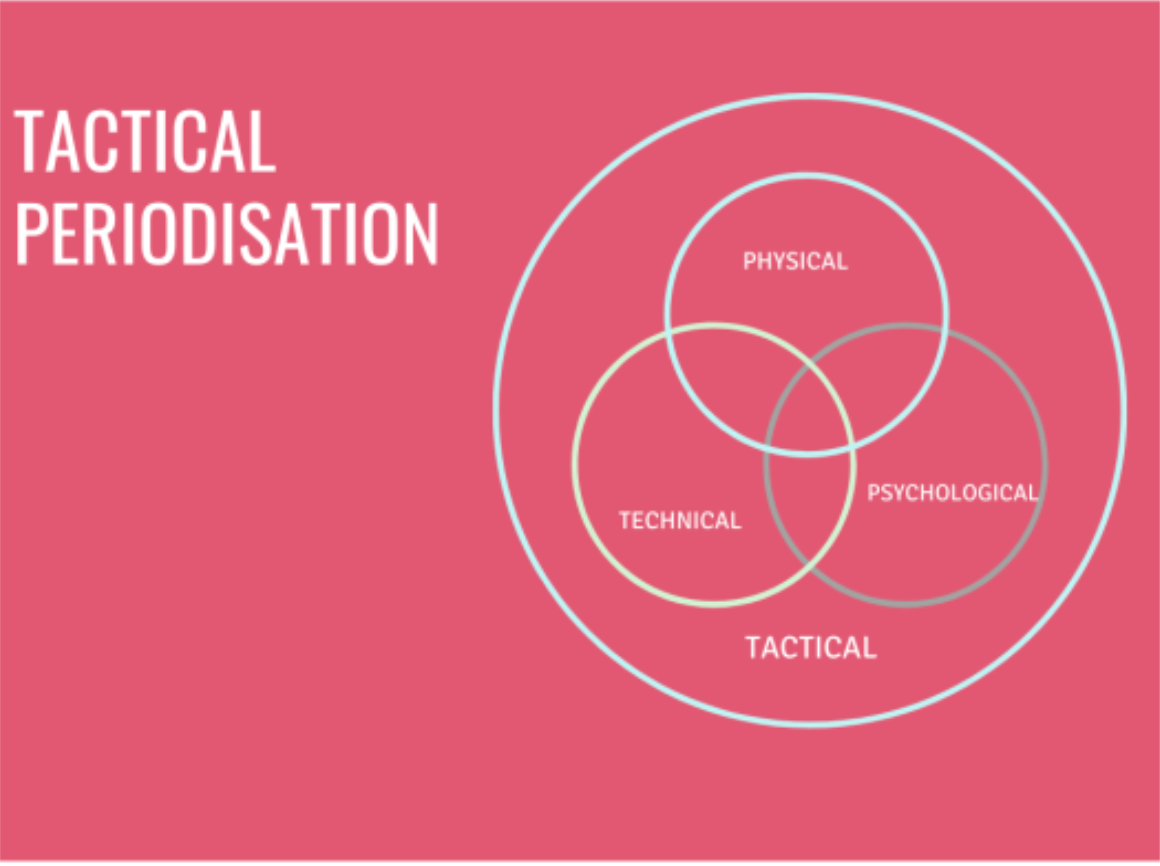 By using the method of Tactical Periodisation, the main objective for the training sessions is for a coach to be able to teach/coach his/her players in the ‘Game Model‘ they desire. The Game Model is the key, this is the tactical element, AKA the way the coach wants their team to play.

Four Moments of the Game…this is quite simply the idea that a football match consists of four moments; Attacking Moment: this moment is when the team has possession of the ball, and their opponent is holding their defensive shape. The Attacking Moment lasts until the team in possession loses the ball.

Defensive Moment: This moment is when the team is in their defensive structure while not in possession of the ball.

Transition From Defence to Attack: This moment begins when the team regains possession of the ball and their opponent is not yet in their defensive shape, in this moment the team in possession has the choice to launch a counterattack or maintain possession and enter the Attacking Moment. Example of the four moments of the game: 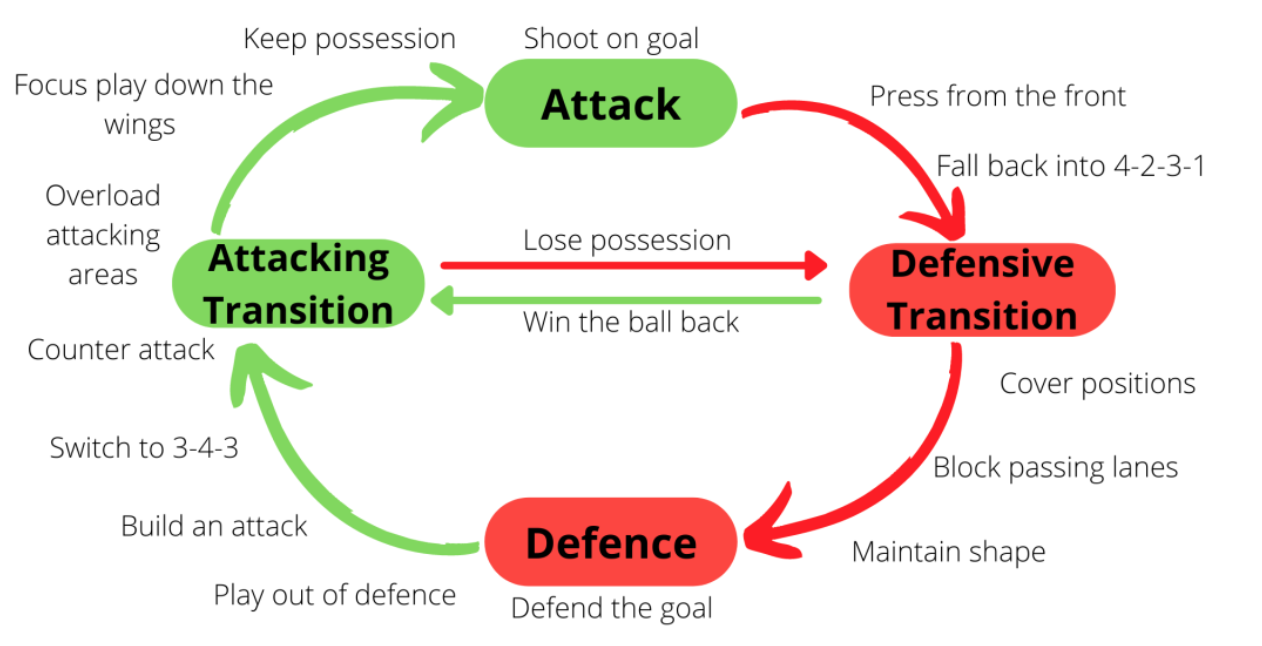 Principles of the Game Model… The principles of the game model are essentially the style of play that the coach wishes to implement. This can be broken down into 3 parts:

Main Principles: This is the identity of the team. This principle never changes, for example if a team’s main principle is to keep possession, they will not change this from game to game as loss of their identity would have a negative effect. This is the core of the team so training sessions based around the Main Principles will involve all the players.

Sub Principles: For the most part the Sub Principles remain the same, with small amendments during the weekly morphocycle. Here, the team is split into groups/sectors to work on specific movements to implement in the upcoming game. For example, if the upcoming opposition is a high-pressing team, training may consist of new variations of the Game Model to accommodate a DM dropping deeper to aid playing out from the back.

Sub-sub Principles: This is specific individual training (or very small groups of 2 or 3). The Sub-sub Principles are adaptable and change depending on the opposition. This is the most flexible element of training, this is where the small tweaks are made depending on the variables such as who the opponent is, for example, a Central Defender who will be playing against a Centre Forward who runs in behind and has plenty of pace will have to adopt a different approach than if they were playing against a Centre Forward who likes to play with their back to goal and hold the ball up. 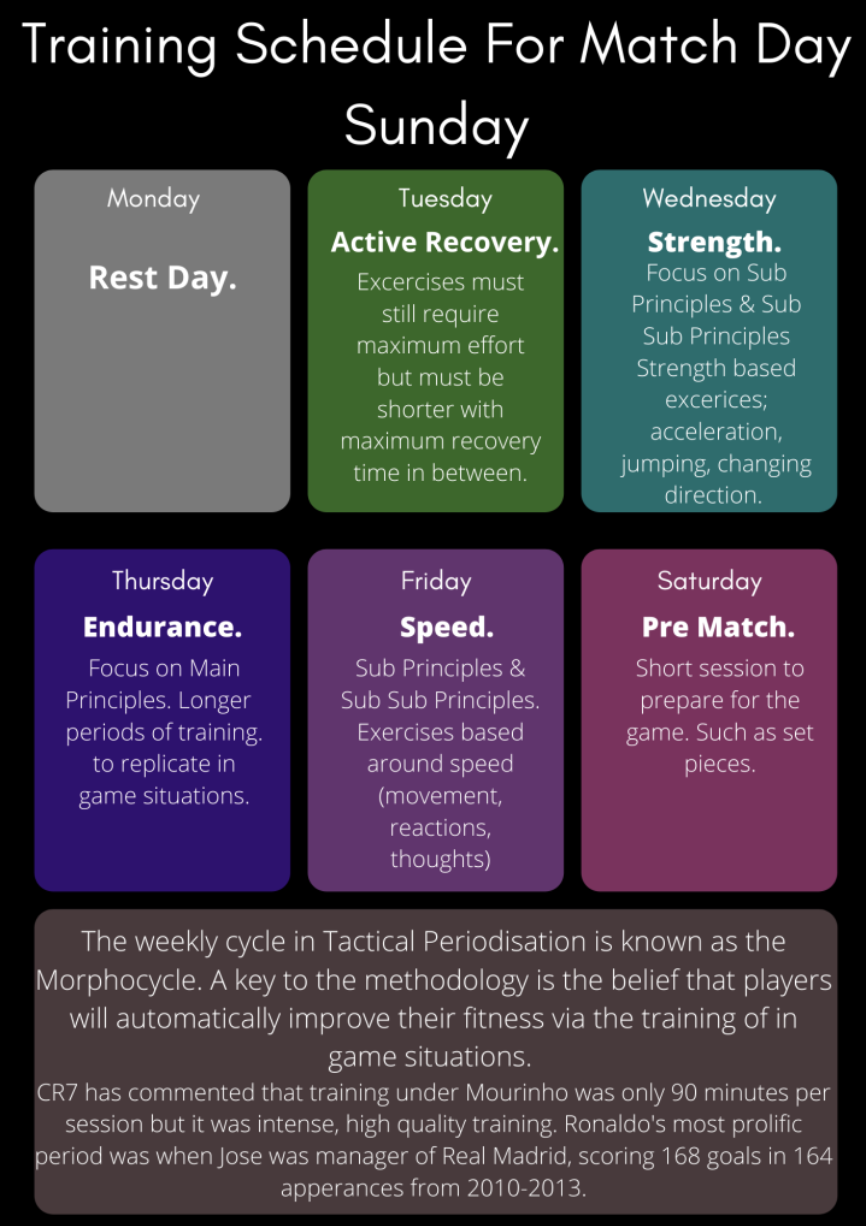 Scales of the Team… These are the groups that the squad is broken down into in order to implement the above training methodology. Collective: this is the whole team; the Main Principles are geared towards the Collective.

Inter-Sectorial: This involves two areas/lines of the team such as defence and midfield, or midfield to attack. This would involve training the relationship between the two lines which would aid/improve the team in transitions.

Sectorial: This involves one line of the team such as defence, focus on the defensive line working as a unit to prepare for in game situations. Group: This is even more specific as it involves certain positions from different lines/areas that play close together such as Central Defenders and Defensive Midfielders or Full Backs and Wingers.

Individual: This is specific training for one player to develop the coach’s desired behaviour or trait. The entire training cycle is based around improving a players in-game intelligence to help them make the right decisions.

Everything is centred around what happens on the pitch, fitness training is integrated into football-based training sessions to boost a player’s fitness components while also ensuring it is relevant to in game situations.

Therefore, Jose Mourinho’s assistant for 17 years was Rui Faria, a Sports Scientist who has a clear knowledge and understanding of fitness training but also has a UEFA Pro Licence meaning he is an equally adept football coach with great tactical knowledge. In short, this methodology is about using training to improve a player’s tactical intelligence to help them make the right decisions in game situations.