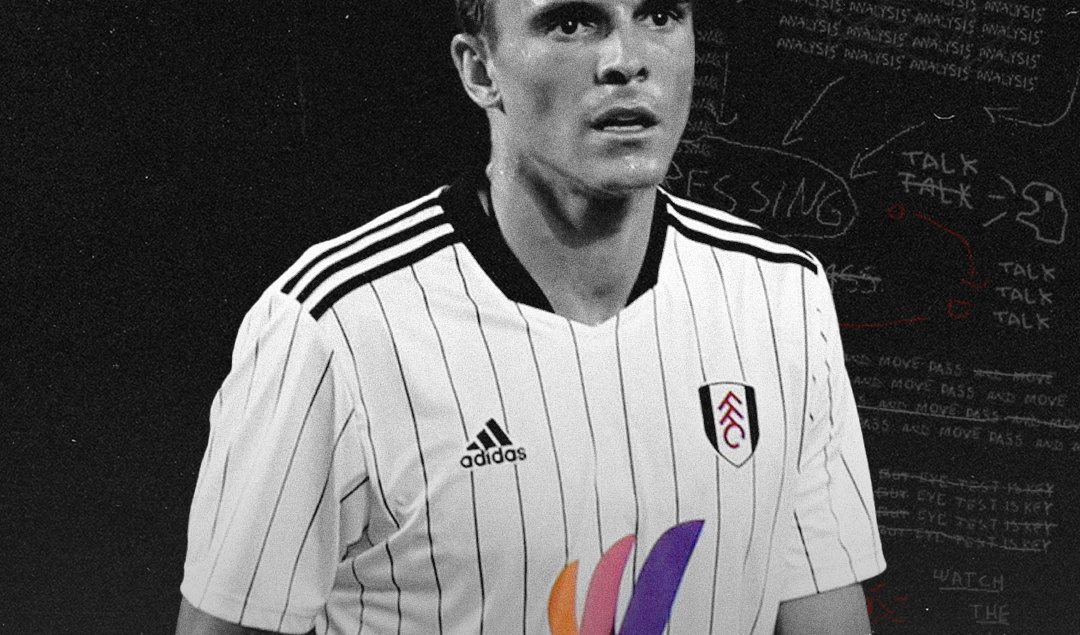 From Nicolas Jover at Arsenal to Bernardo Cueva at Brentford to Gianni Vio at Tottenham, more and more Premier League teams are investing in set-piece coaches and creating goal-scoring scenarios with well-worked set-piece routines. Today, we’ll be taking a look at four unique corner kicks from the past few weeks of the Premier League season.

In this routine, Arsenal’s four players are clustering in the goalkeeper zone before dividing into specific positions. Below, with Bukayo Saka taking the inswing corner, Gabriel Magalhães and Eddie Nketiah are out of the six-yard ready to attack the near and far post zones respectively with their dynamic advantage over the defenders there.

Furthermore, Oleksandr Zinchenko and Martin Ødegaard are out of the box in the rebound zone ready to collect the 2nd balls and acting as a part of the rest of defence ready to prevent any transition. Brighton are using a zonal-marking approach with only one player marking Gabriel. 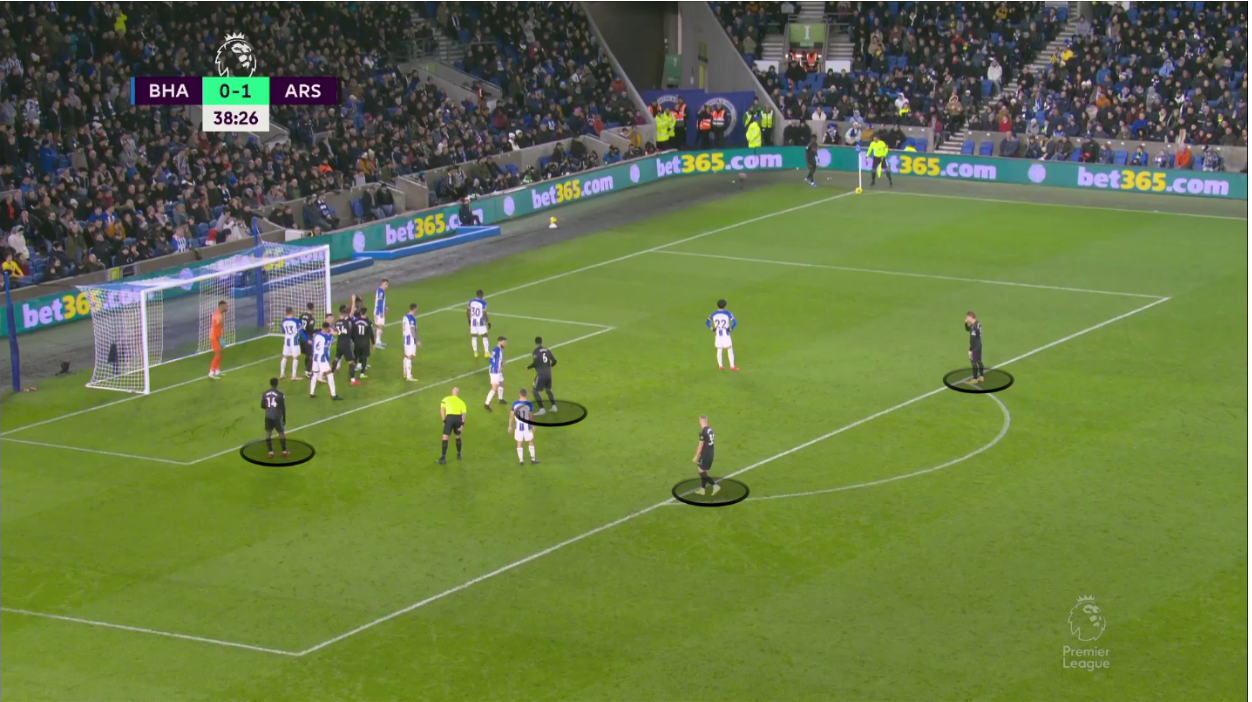 Immediately while Saka is taking the corner, Arsenal’s players split. Below, in red colours, the players are responsible for freeing up space in the near post for the main target Gabriel who succeeded in creating separation from his marker. Gabriel Martinelli quickly jumped to the flicking zone to take the attention of the 1st two defenders there. Thomas Partey blocked Tariq Lamptey from joining the targeted space meanwhile Granit Xhaka turned his body and made a backward block to Lewis Dunk thus preventing him from tracking Gabriel’s movement. William Saliba is also stuck in his position deeply confusing the goalkeeper. 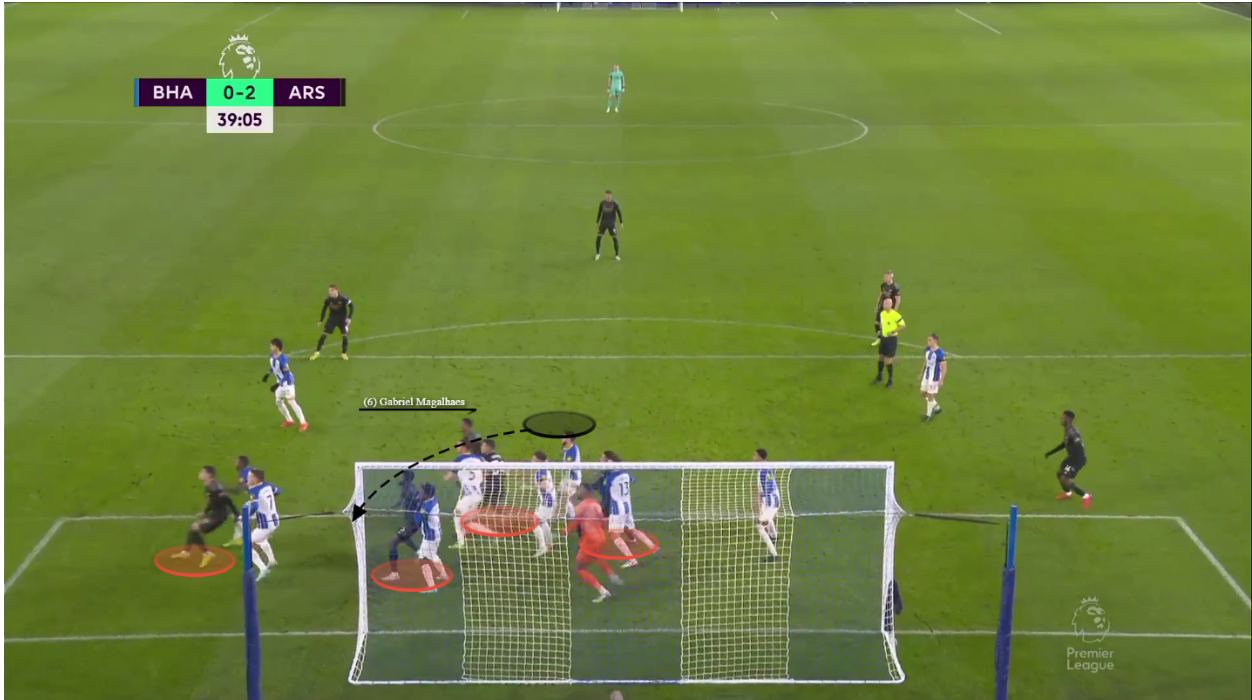 Before Gabriel didn’t reach the ball and then the defender distributed it away, Kaoru Mitoma stepped left three steps which is opening the lanes to Ødegaard who was in the rebound zone ready to take it. Mitoma’s three steps to the left might be a part of a potential transition but it was harmful here because it stretched the distance in his attempt to block Ødegaard’s shot. The crowd of players in front of Robert Sánchez confused the Spanish goalkeeper while Ødegaard fired the ball to his left. 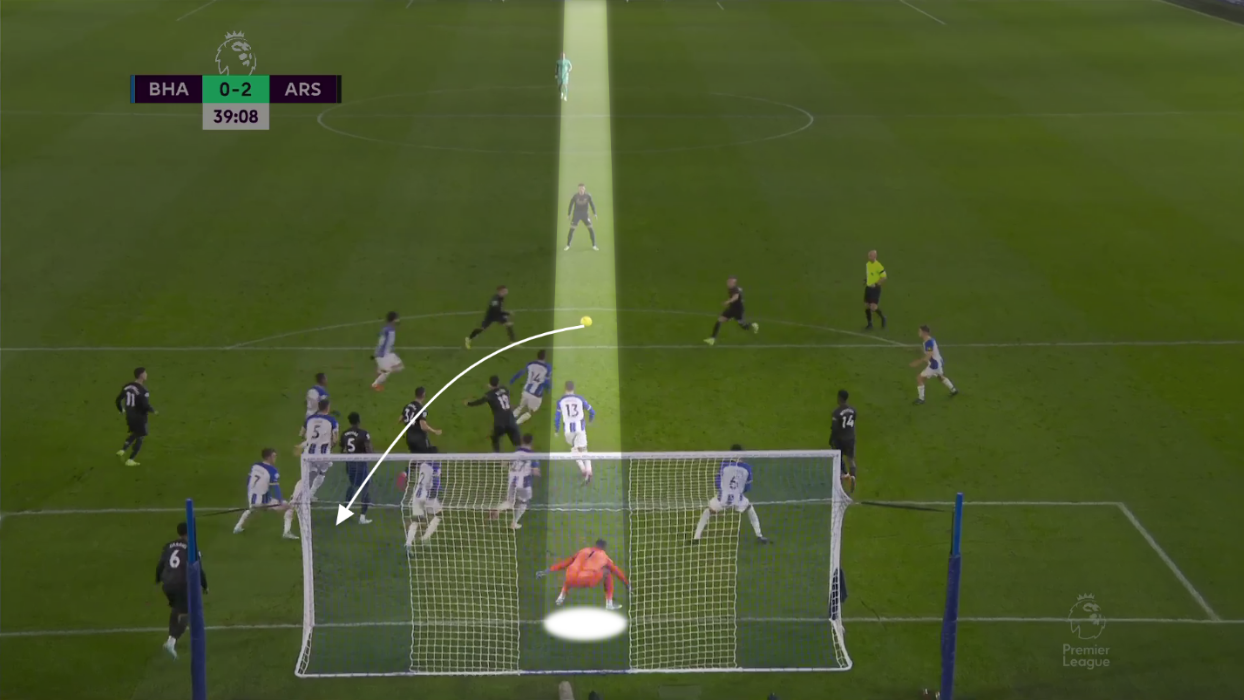 Having gone two goals clear of the Seagulls at halftime via goals from Saka and Ødegaard, Arsenal bolstered their lead in the second half via Nketiah, restoring their three-goal advantage via Martinelli after Mitoma cut into their lead, and surviving a nervy final minutes after Evan Ferguson pulled one back for Brighton and Mitoma had his second disallowed. The Gunners would go on to close out the year with a 4-2 win at the Amex to remain atop the Premier League table.

Andreas Pereira’s goal against Southampton was also from operating the rebound zone but it was a direct connection. While Willian prepares to in-swing delivery, Southampton are using a man-marking coverage approach.

Fulham’s players (white) are distributed in the routes ready to run to their indicated positions. Pereira (yellow) is free in the centre of the rebound zone meanwhile Harrison Reed (red) is near the kicker for a short corner dragging Samuel Edozie (grey) which extended the distance between him and Pereira. The routine is to drag the defenders away from the targeted space, and Fulham’s centre-backs did it very well. 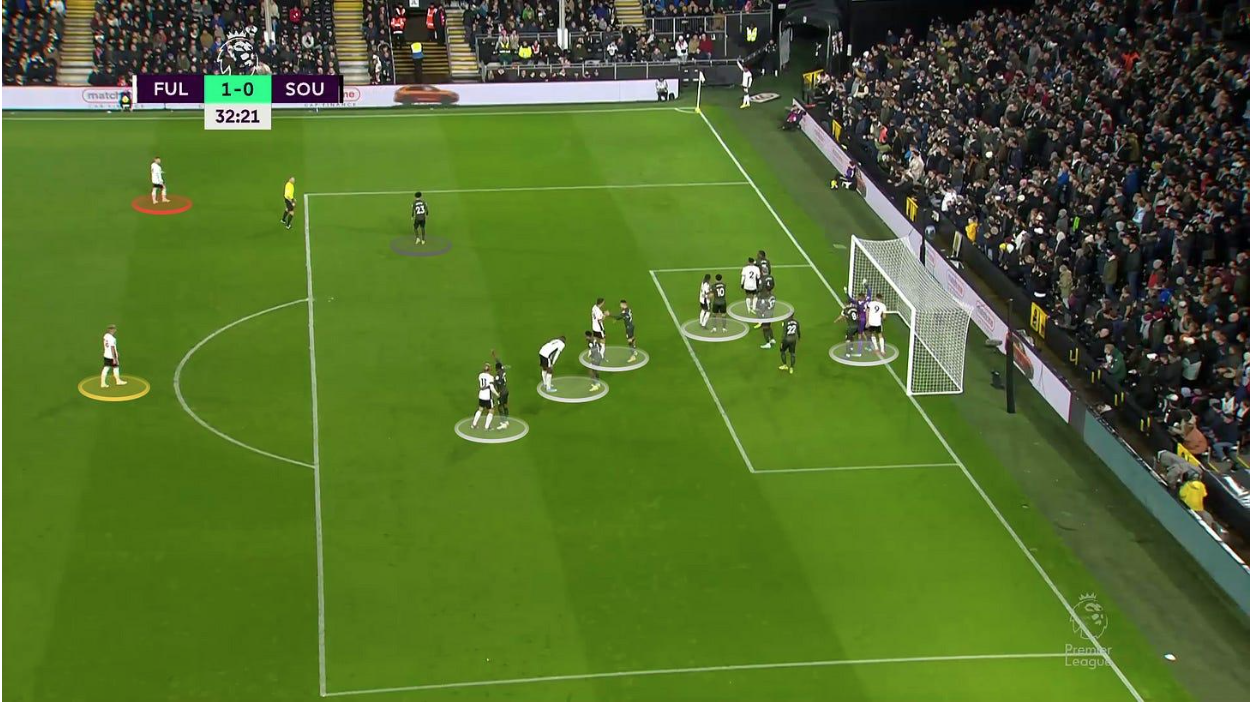 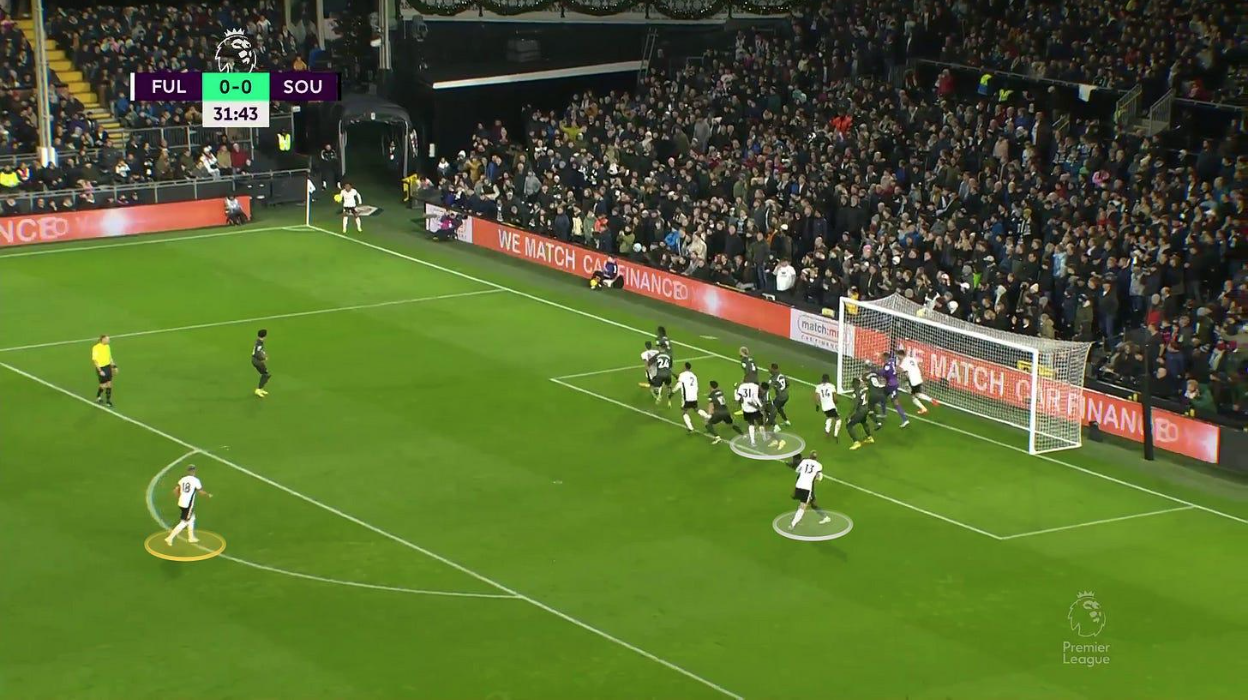 Here, Willian played the corner towards Andreas Pereira. Tim Ream is holding and blocking his marker, whilst the American’s central defensive partner Issa Diop also is using his arm to block and prevent the defender from blocking the shot. 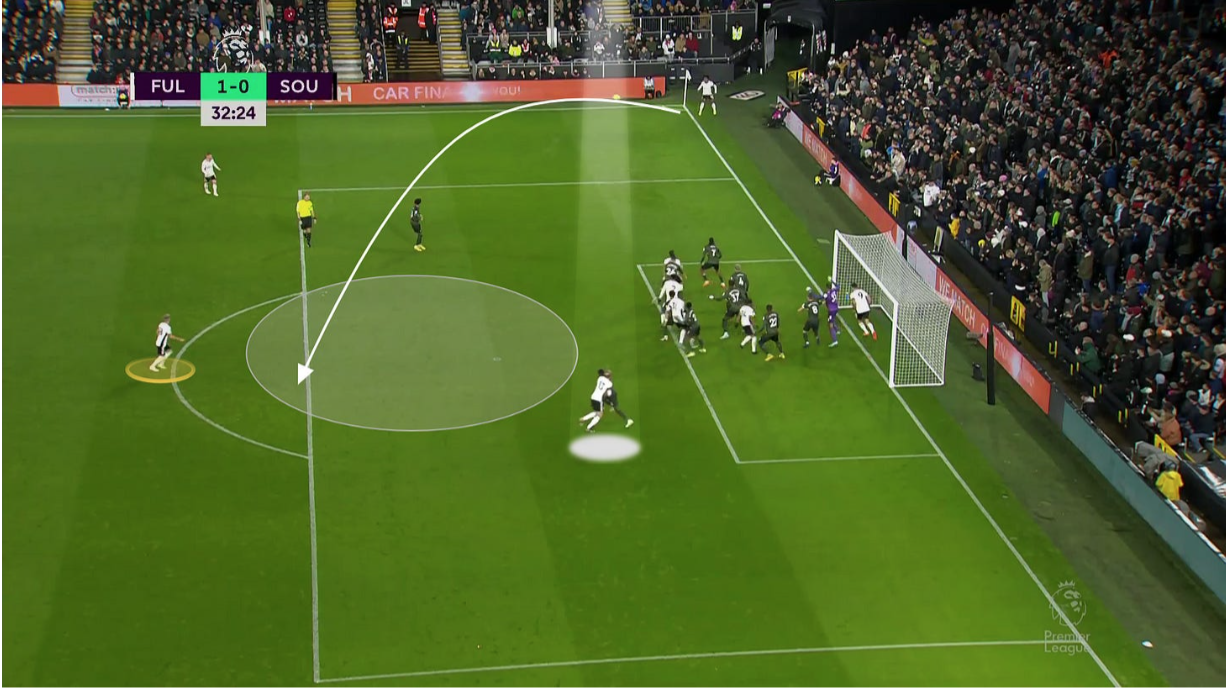 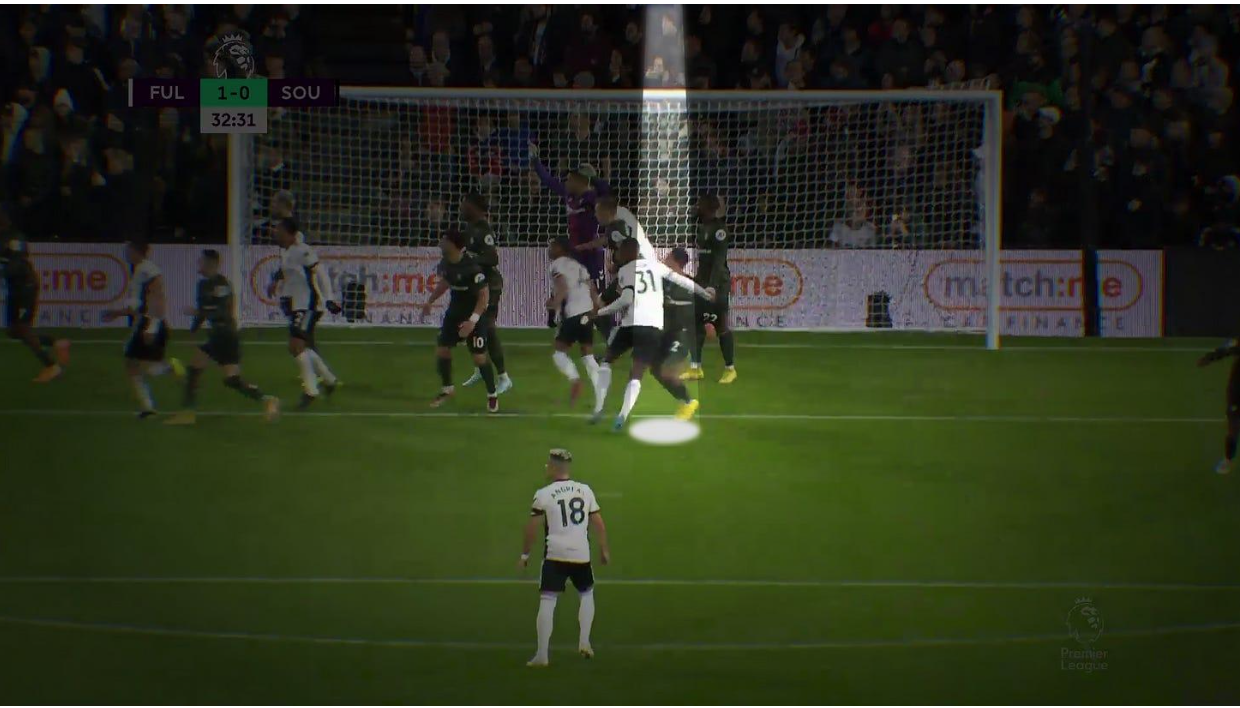 Andreas Pereira launched a shot that deflected off James Ward-Prowse and into the back of the net, giving Fulham the advantage within a half-hour. Ward-Prowse would atone for his own goal by equalizing in the 56th minute, only for João Palhinha to score a late winner to snatch a 2-1 victory for Marco Silva’s side at Craven Cottage.

Unlike the previous two situations, this corner kick did not lead to a goal in Arsenal’s 0-0 draw against Newcastle, but it is nevertheless worth delving into. In this attacking routine from Newcastle, the Gunners are using a hybrid defensive system a combination of zonal and man-marking approaches. While two players are in the rebound zone, three players are lined in front of the six yards marked by Arsenal’s defenders.

The delivery was targeted at the near post (flicking zone) by an inswinger corner from Kieran Trippier and then deliver to the far post. The main targeted players are Joelinton (yellow) and Fabian Schär (grey). Callum Wilson is in the far post. Using the run for flick-ons, the ball-near delivery can manipulate the 1st line to make movements toward the ball, which can open the possibility of latching onto the 2nd ball. 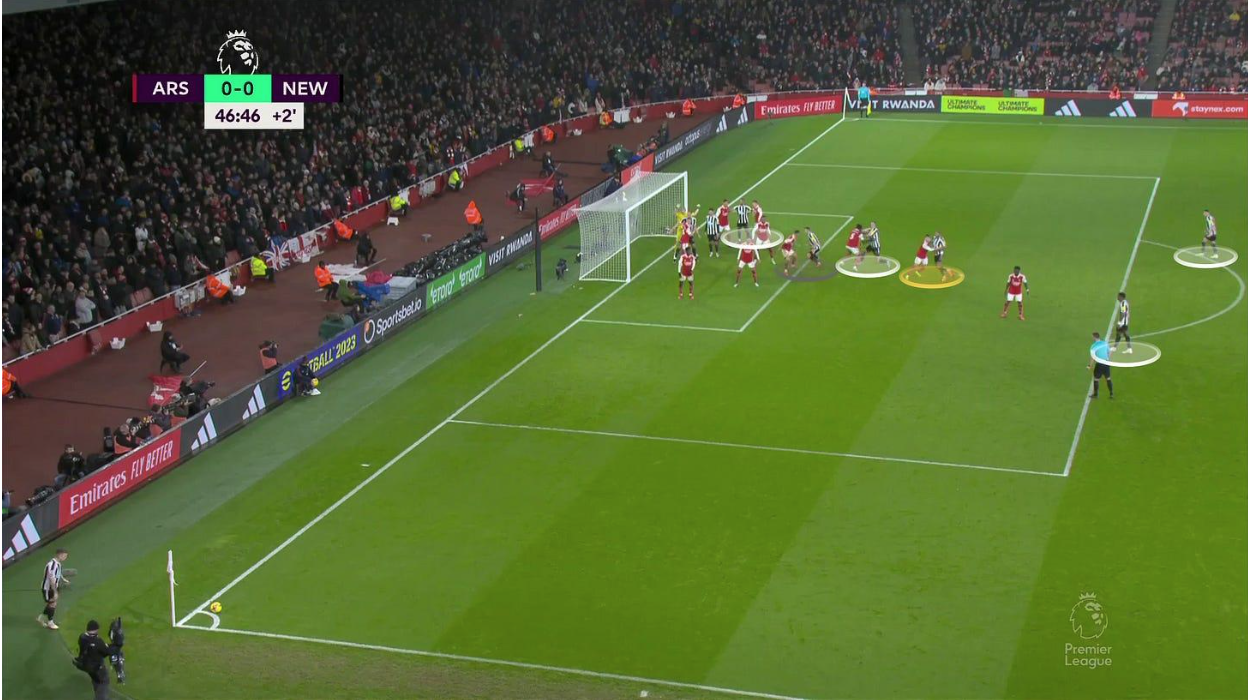 Furthermore, Dan Burn and Bruno Guimarães are occupying the goalkeeper’s zone in an attempt to stop Aaron Ramsdale from coming off his line and swatting away the set-piece. 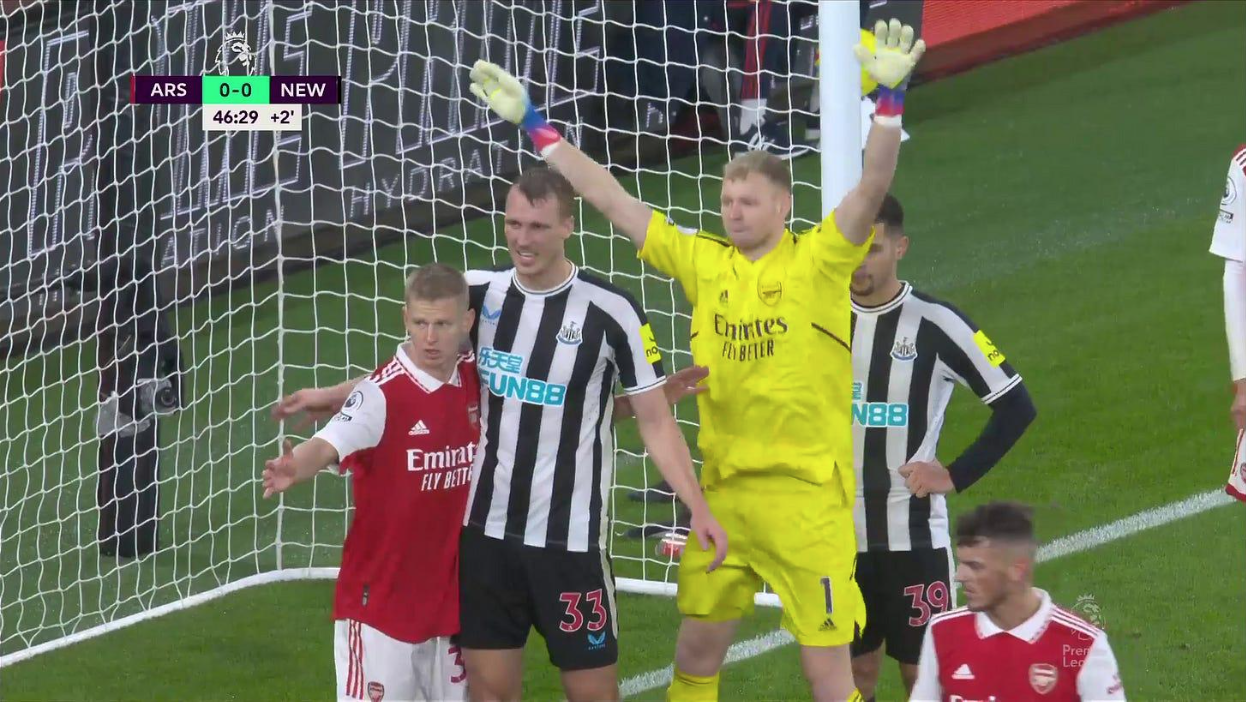 As Kieran Trippier is about to deliver the corner kick, Joelinton did a shrewd body feint (countermovement) to escape the marking of Martinelli whilst Fabian Schär pushed Granit Xhaka away and made a clear run to the flicking zone. 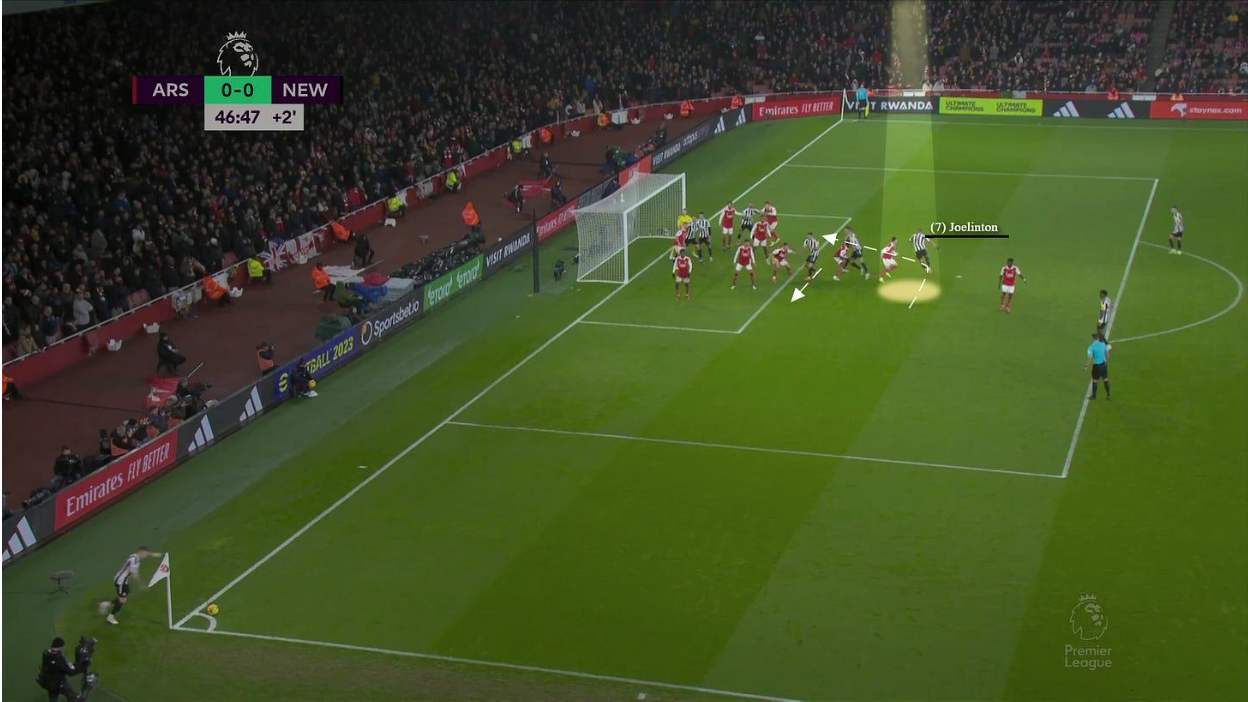 In the below scene, Fabian Schär succeeded in flicking the ball above White. Dan Burn still preventing Ramsdale. Callum Wilson and Sven Botman are disrupting and holding up Thomas Partey and William Saliba respectively. The ball arrived at its destination and Joelinton came close to scoring. 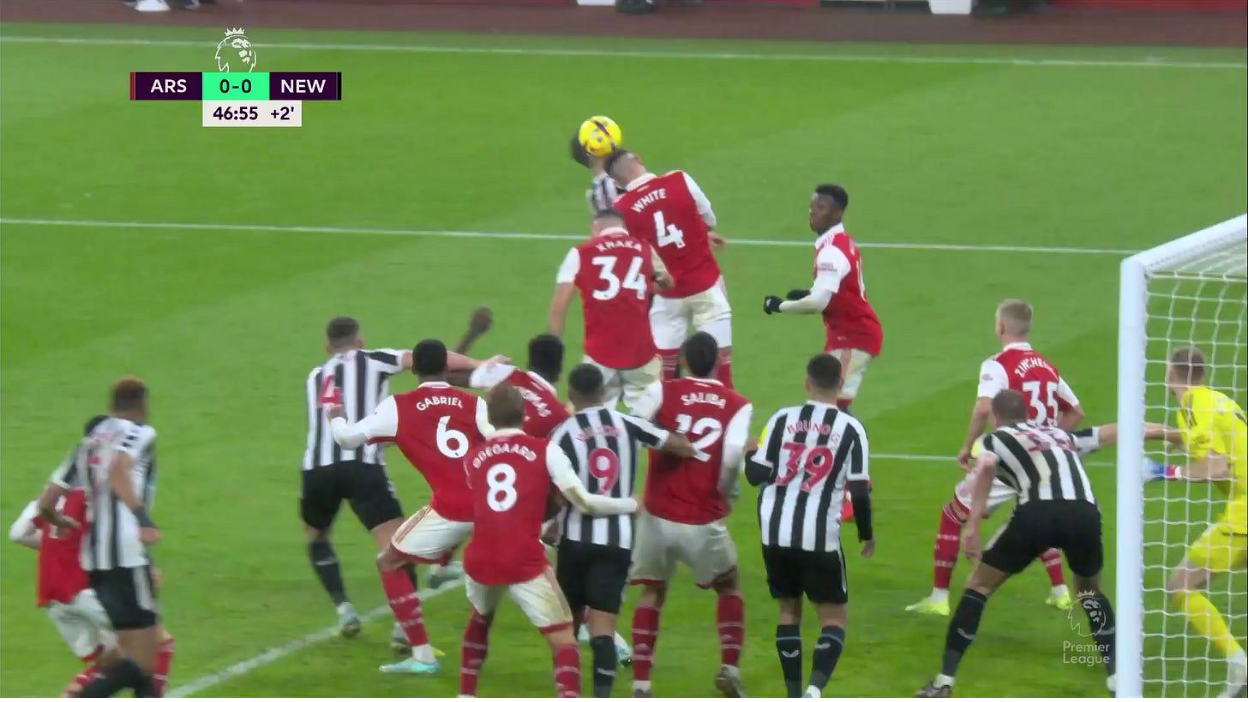 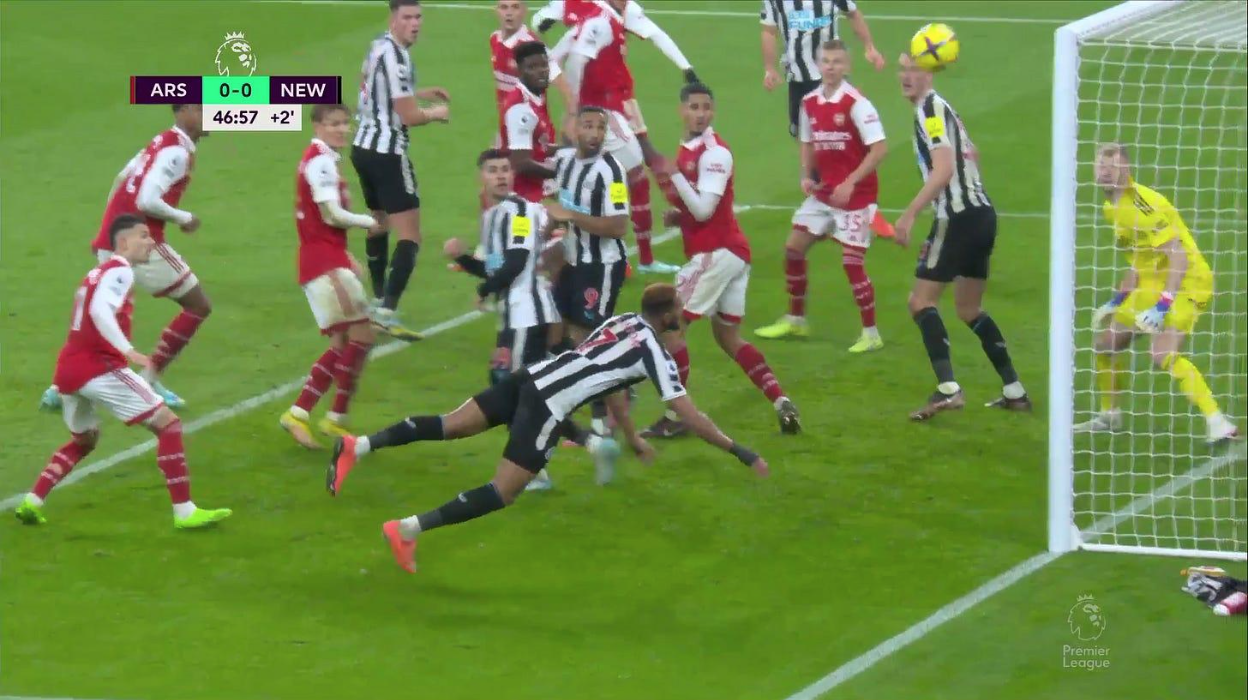 The concept is the same as the previous one: using the run for the flick-on zone. The delivery was targeted to the flicking zone by Andreas Pereira’s inswinging delivery and then flicking it to the far post. Below, Southampton are using a system that combined zonal and man-marking approaches.

Fulham are having six players inside the box, two players in front of the goalkeeper while three players are marked and a single player in the near post is free. Furthermore, while Fulham still forming two players in the rebound zone, the position of the defender who is ready to defend against them is changed versus Pereira’s goal. The players in yellow are the targeted players. 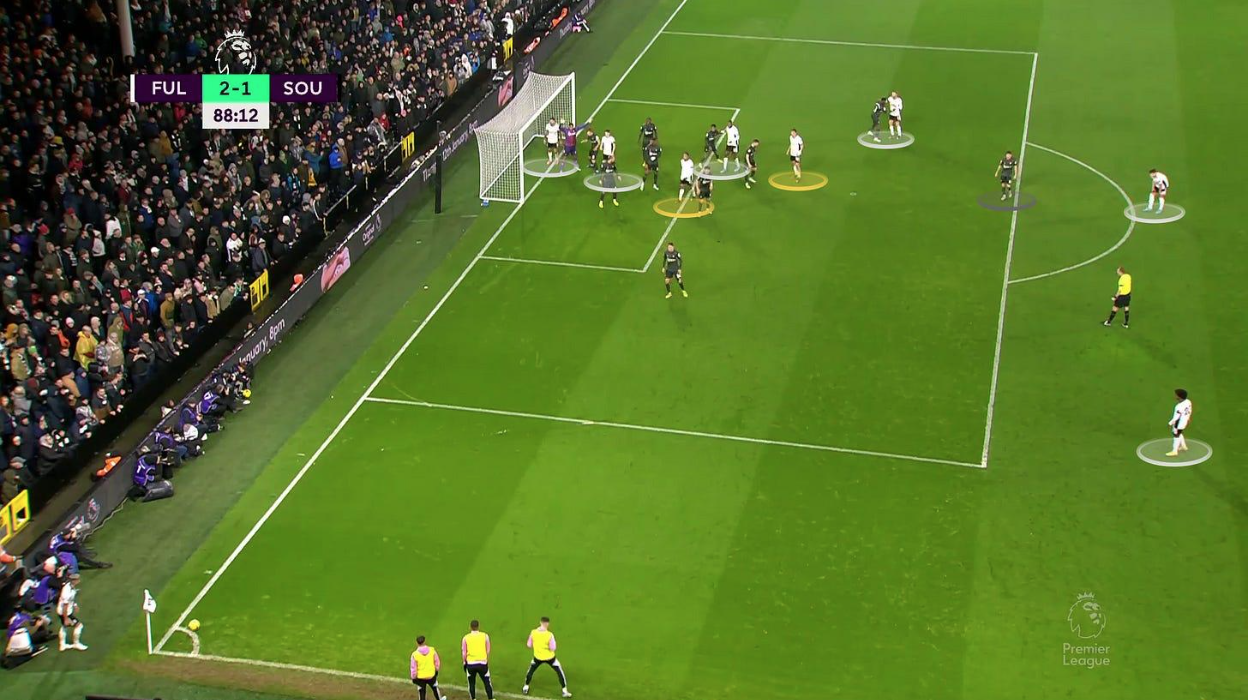 During the beginning of the corner kick, Aleksandar Mitrović would move from the blindside of the goalkeeper and join the near post with Tete. João Palhinha and Tim Ream would try to beat their markers and attack the far post. 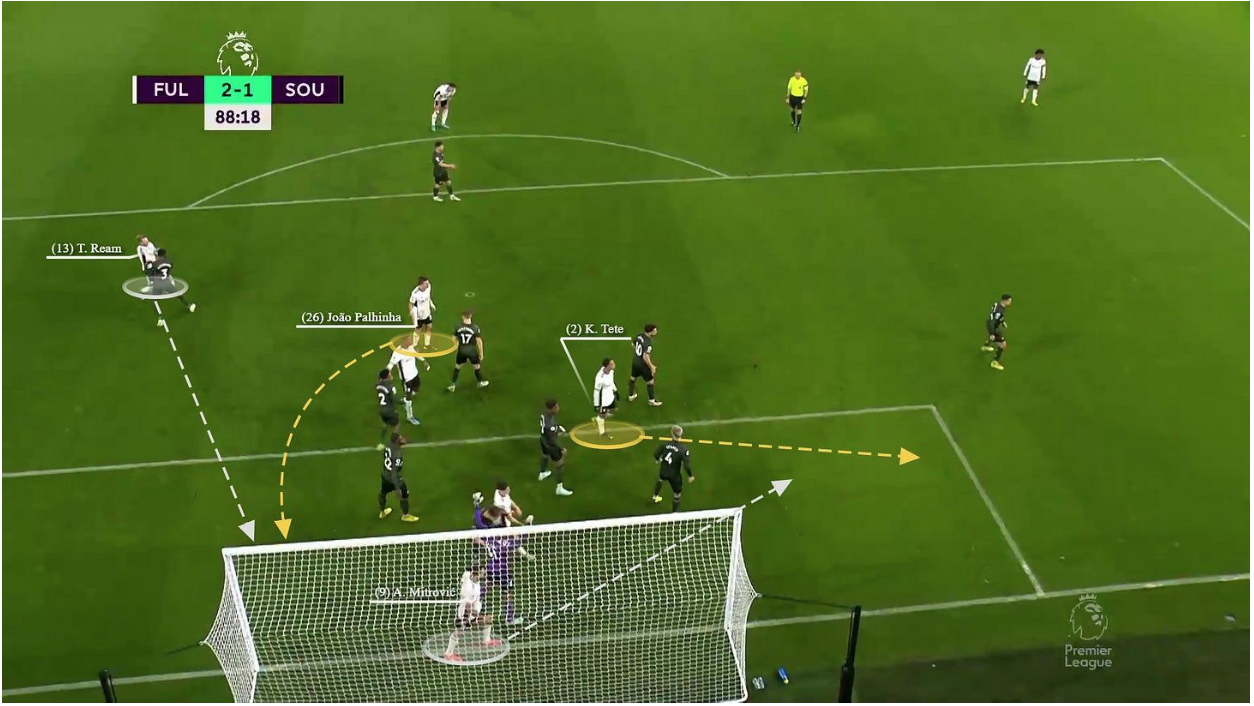 While the ball is in the air and Aleksandar Mitrović had moved, Daniel James blocked James Ward-Prowse and the goalkeeper Gavin Bazunu from getting out. 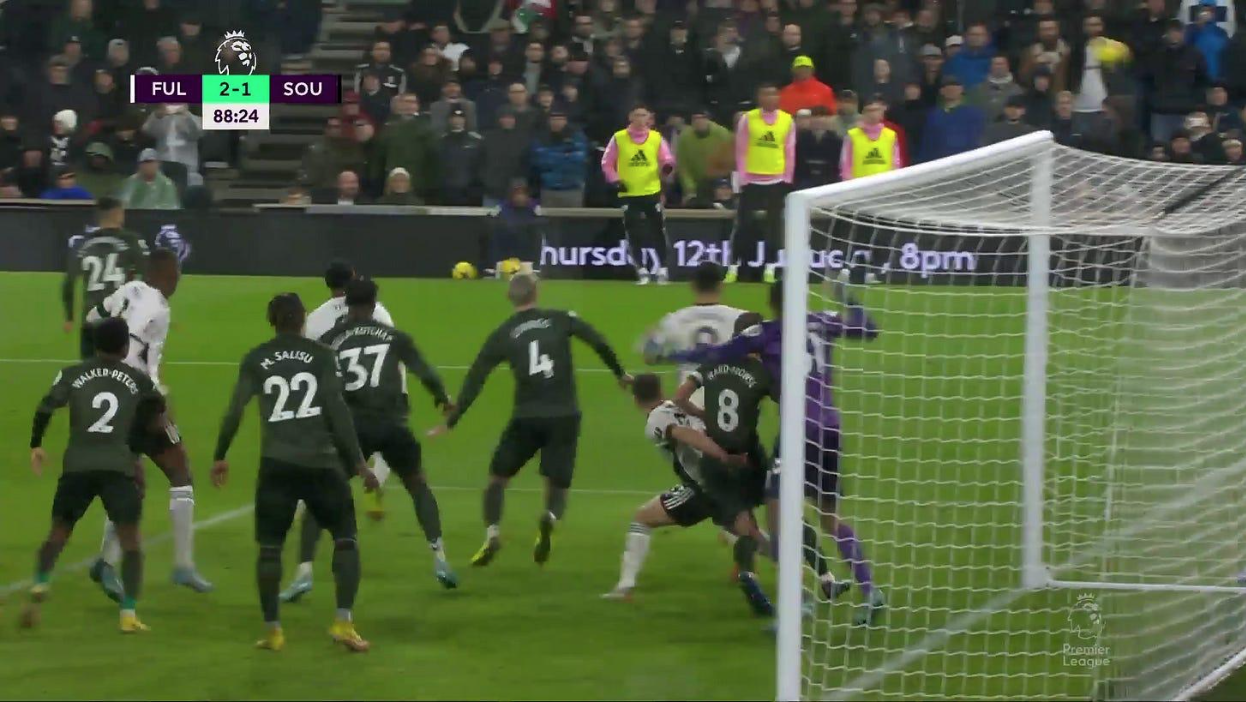 Below, João Palhinha and Tim Ream succeed in creating separating from their makers and starting to attack the space in the far post. Thus, Aleksandar Mitrović is preventing Lyanco from engaging Kenny Tete who flicked it to the far post, where Palhinha is there to head home the winner. 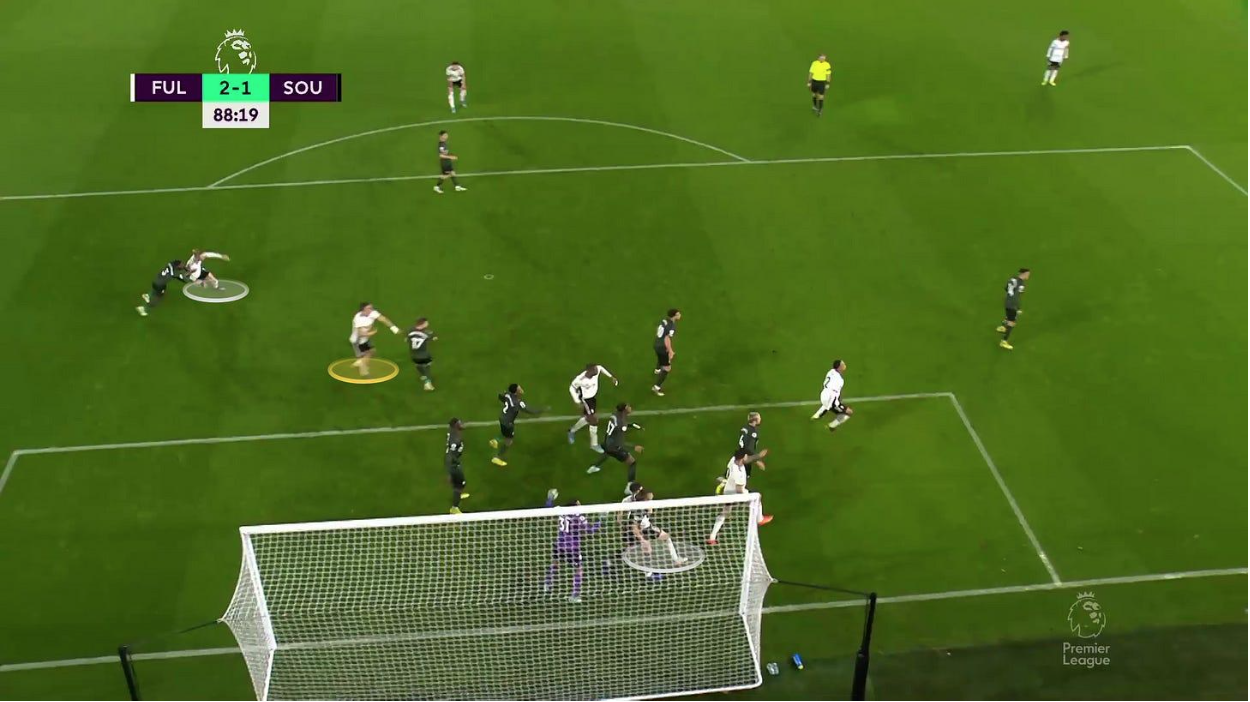 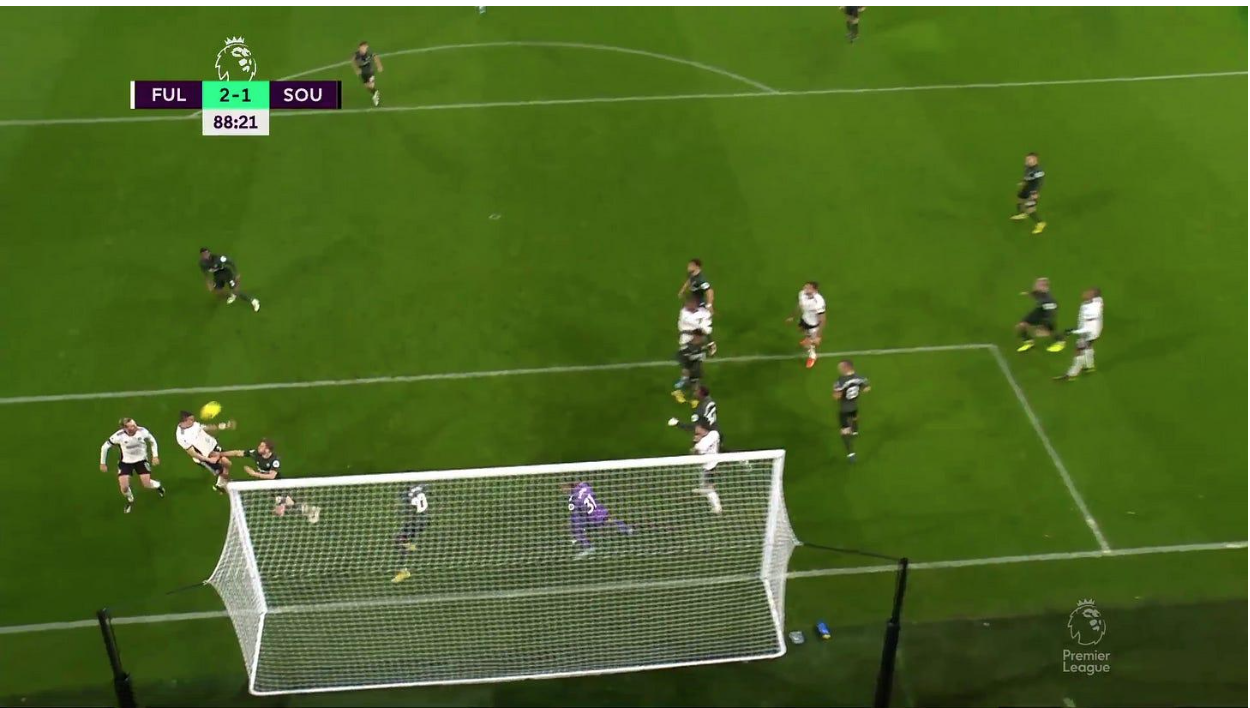 After edging Southampton 2-1 on the final day of the year, Fulham have since opened 2023 with a 1-0 victory against Leicester City in the league as well as a 2-0 win over Hull City in the FA Cup, whilst last-placed Southampton’s form has gone from worse to worse with Nathan Jones’ side falling to a 1-0 home defeat to Nottingham Forest and bouncing back with a 2-1 win over Crystal Palace in the FA Cup. Next up for Saints? A visit from Pep Guardiola’s Manchester City in the EFL Cup.