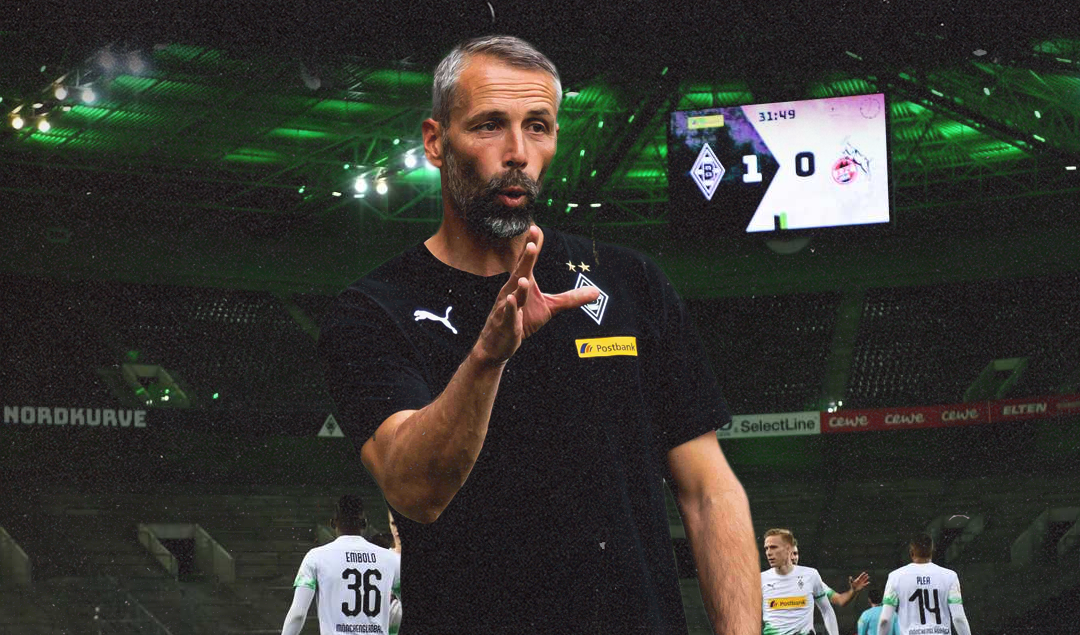 Borussia Mönchengladbach have enjoyed a thoroughly productive season in the Bundesliga, surpassing all expectations that supporters had when Marco Rose took over as manager last summer. After defeating Bayern Munich 2-1 in December, Die Fohlen topped the Bundesliga, albeit temporarily. Since then, performances have generally been consistent, and Gladbach have been strong challengers for the Champions League places, currently holding onto fourth place with a +4 GD advantage to Bayer Leverkusen.

Many have attributed this success to free-flowing football and the emergence of young performers, but it is an established fact that Gladbach are capable of sustaining this level due to their use of the Expected Goals balance (xG – xGA).

What is xG and How Does it Benefit Gladbach?

Expected goals (xG) is a measure of the number of goals that a team would be expected to score in a match, based off the number and quality of shots they performed. Conversely, the xG performance of the opposition in an individual match would equate to a team’s expected goals against (xGA).

To give rise to the notion that Rose is an advocate of the xG balance, Gladbach’s xG and xGA were both measured over the seasons preceding the German’s reign, and then compared to the xG balance within his reign. As one could deduce from the title of the article, there was a profound difference. 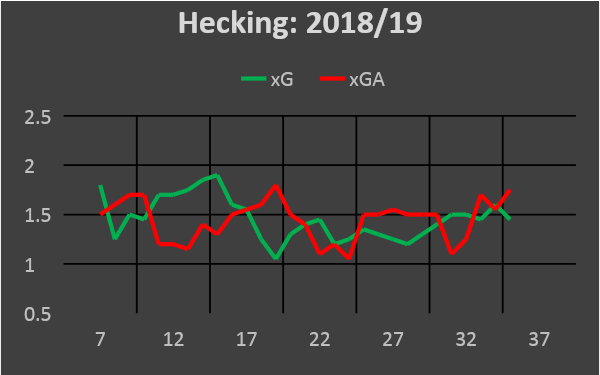 Figure 1: Gladbach’s expected goals balance in 2018/19 under Dieter Hecking. The key depicts xG and xGA, as a rolling average of six consecutive matchdays. 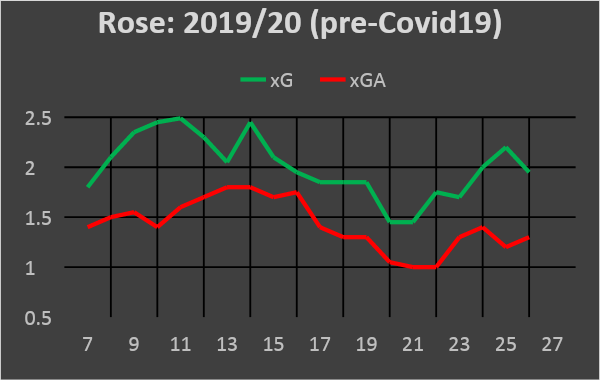 Figure 2: Gladbach’s expected goals balance in 2019/20 (prior to the suspension of football) under Rose.

The obvious interpretations from these graphics are that Rose has improved Gladbach’s attack, while the defence is performing less erratically (albeit at a similar overall average to Hecking’s 2018/19). The rolling xG balance is positive for the entirety of 2019/20 prior to the Bundesliga’s suspension, which begs the question: How has Rose achieved this?

Evidence for this notion is found when looking at Gladbach’s xG maps. Two of the four matches they have played since the break are pictured below. Gladbach seek to create high xG shooting opportunities by progressing the ball into dangerous areas; close to goal and central. The occasional shot from range isn’t necessarily discouraged, but they are the exception rather than the norm. 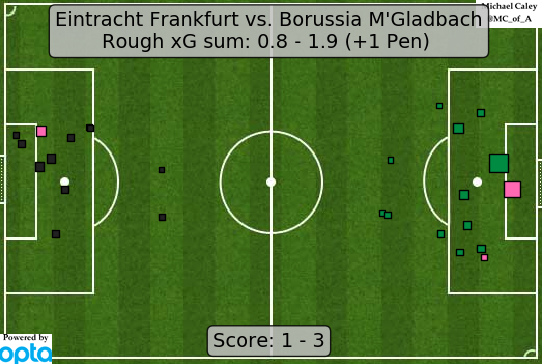 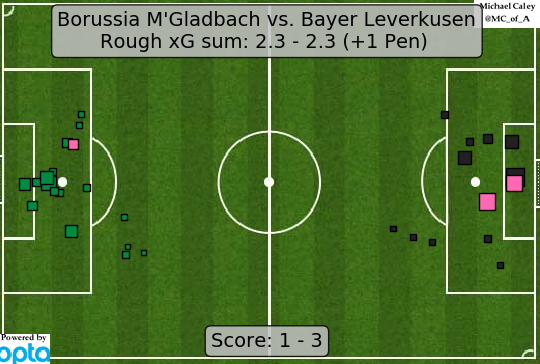 Looking at the two matches pictured and the comprehensive 4-1 rout of Union Berlin last Sunday, one can get a clear idea of what tactics Gladbach utilise in order to produce higher quality chances.

When discussing attacking tactics, it is important to understand the role of first and second phase build-up play. Gladbach like to build up from the goalkeeper, Yan Sommer, who is superb on the ball. Whether it be from goal kicks or open play, even Sommer is capable of breaking the first line of pressure if Gladbach are pressed by the opposition.

If teams sit off Gladbach, the Swiss goalkeeper can perform quick switches/diagonals to the full backs in order to progress down the side of the opposition block, or pass consistently into the strong feet of the centre backs, who can progress the ball more efficiently.

The midfield players, often Florian Neuhaus, Jonas Hoffman and Lars Stindl, are all consistent high-volume passers, as well as being reasonably press resistant. It allows them to either pass their way or dribble their way into the final third when avenues in the opposition’s shape open up. They also ensure possession is retained through recycling to centre backs and fullbacks if progressive options aren’t on.

These midfielders often create 3v2s versus opposition midfields by playing within close proximity of each other. The fundamental point, however, is that progressive play isn’t forced if opportunities don’t arise. Risky actions in the middle third, such as long-range shooting, aren’t conducive of high xG chances.

Rose and Gladbach have taken a leaf out of Jürgen Klopp’s gegenpressing notebook when it comes to transitions. Rose has realised that creating high xG chances is more likely to occur if possession is had closer to the opposition’s goal, and if the opposition aren’t in a good settled shape.

Gladbach are dogged in attacking transition, forcing turnovers and then combining smart movement and smart on-the-ball decision making to get shots off in dangerous areas. The first goal versus Union Berlin this weekend exemplified this best. 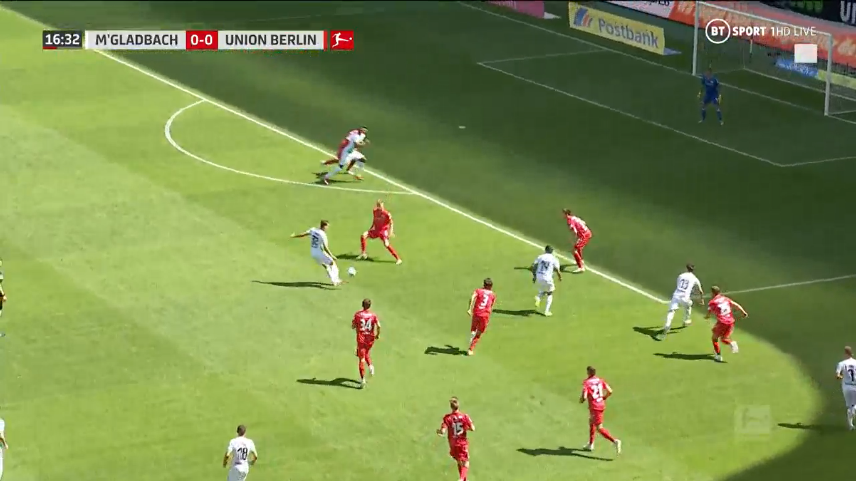 Gladbach won possession from a duel from a throw-in; and broke effectively. Alassane Pléa and Marcus Thuram (the front two) both make smart decoy runs to allow Neuhaus to dribble into the box and score from a higher xG chance. Should Neuhaus have fired a shot when the space first opened up, or passed to either of the decoy runners, the percentage of a goal arising would have been significantly lower.

This is clearly premeditated decision-making: if Gladbach are in attacking transition, they must be patient and expose the spaces in an opposition’s poor settled shape.

Since the former’s arrival in Germany last summer, Thuram and Pléa have formed a scintillating duo in attack for Gladbach this season. While both are great individual players (Thuram in particular looks like a well-rounded footballer), their movement and decision-making has taken them up an extra level in terms of consistency.

They often play as an interchangeable front two, with a #10/CF such as Breel Embolo behind, or in a front three with Patrick Herrmann to the right and deeper. Thuram likes to roam across the front line to seek the ball out in the final third, or to receive from 2nd phase players. The Frenchman’s hold-up play also makes him a good option from direct play from Sommer.

Players such as Stindl and Thuram can operate in a variety of roles, and their versatility allows Gladbach to create higher xG opportunities from a broader range of scenarios. For example, the second goal versus Union saw Plea cross from the left for Thuram to head in. This is clearly a premeditated tactic from Rose; Stindl beats the press with a sharp turn, and Pléa stations himself wide left here. 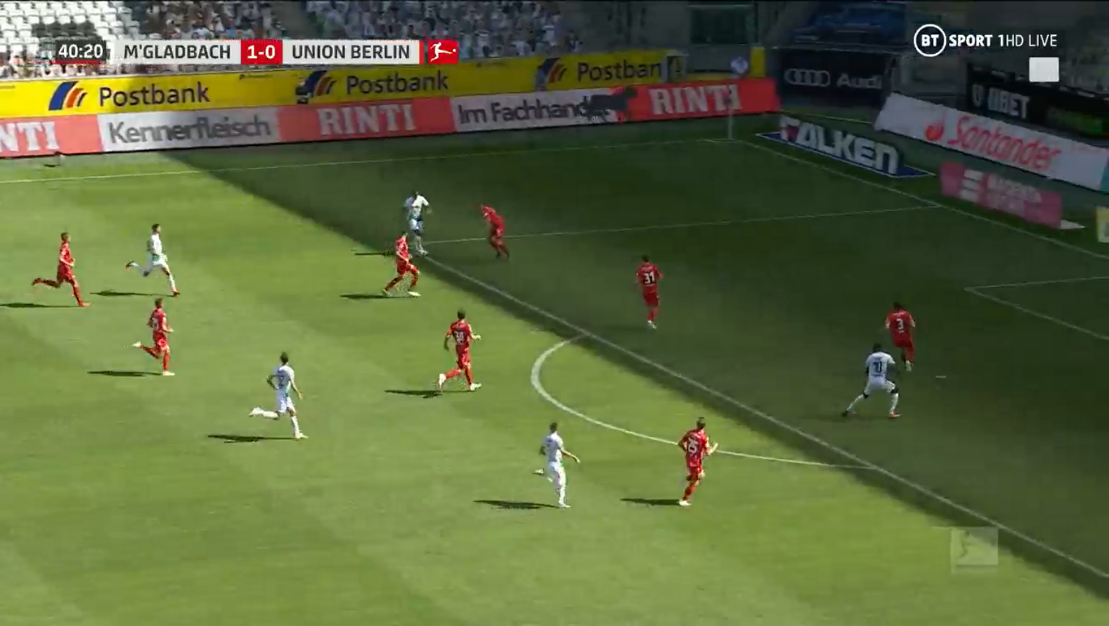 Pléa receives the ball into space and drives at the Union fullback. The key aspect though, is that he doesn’t perform a low percentage cross as soon as he sees Thuram enter the box. Rather, he patiently waits and utilises one of his assets, good dribbling, to occupy the fullback and get into a more dangerous position.

By the time Thuram feints in and moves out (a striker’s trigger movement), Pléa is in such close proximity to the goal that the defender closest to Thuram cannot intercept the cross. This leaves Thuram completely unencumbered to head in. Ultimately, all of these factors will have increased the xG of Thuram’s header.

Good positioning in each phase of play, specific premeditated decisions for certain players of certain skillsets, and smart movement (such as decoy, or trigger based) are all such simple fundamentals that Gladbach consistently stick to consistently create high xG chances in games.

The Union Berlin game is an example of where these tactics came off, but xG maps from Gladbach’s other fixtures show that this is a sustainable method of increasing goal-output, thus increasing the proportion of matches won. Marco Rose has implemented most of these factors and has galvanised a talented group of players to perform at their optimal level.

Five games remain, including a daunting trip to Munich on Saturday, but if Gladbach can stick to their xG-optimising methods, then they will clinch their first Champions League qualification in four years.