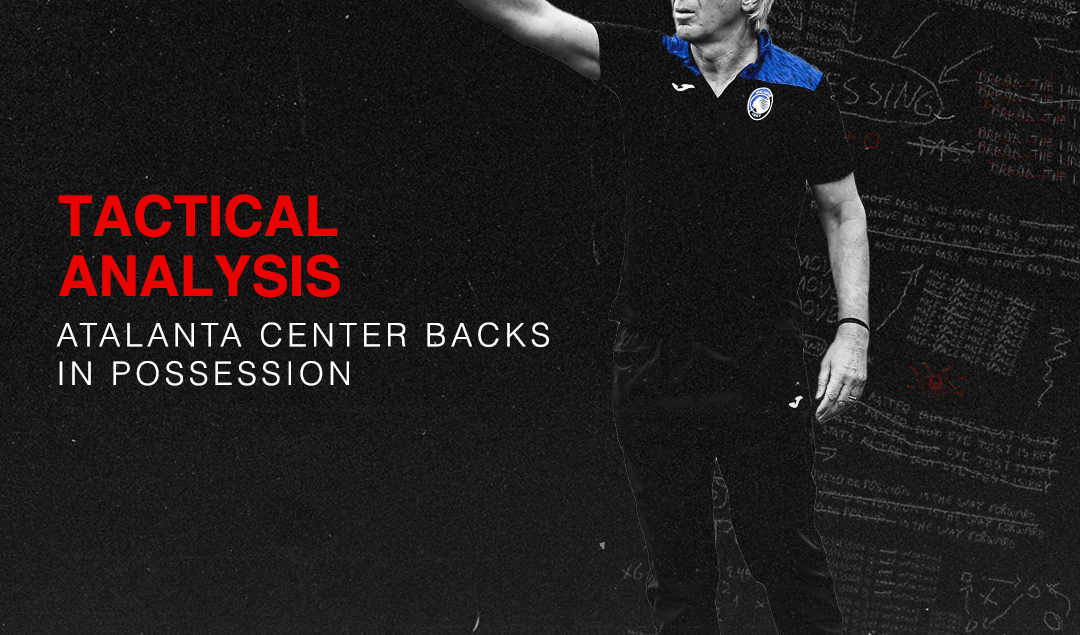 Playing three centre backs is often presented rather superficially as defensive system, as many anticipate it will manifest itself as a back five: subtracting either a midfielder or a forward in favour of a defender. However, many teams such as Gian Piero Gasperini’s Atalanta use the extra cover provided by a back three to allow their defenders even greater freedom in attack as they become direct routes of ball progression.

Central defenders stepping out of defence is not a new phenomenon, but it is becoming more and more common as teams in possession seek different methods to break down increasingly structured and cohesive defensive sides who excel at protecting central spaces.

Atalanta play predominately with a 3-4-1-2 shape. The seeming central focus of the shape can be misleading, as the centre spaces are often left vacated for captain Alejandro ‘Papu’ Gómez; notably with forwards Josip Iličić and Duván Zapata roaming to support the wide build-up which thereby increases the space between them.

A back three allows for greater central coverage of the pitch and enables the wider centre backs to split, granting them greater access primarily to the half-spaces but also providing potential link-up play with wider players who are often afforded the most space by the opposition as they look to remain centrally compact.

The wide centre backs are granted the freedom to progress the ball via dribbling, often allowing Atalanta to gain territory, particularly against striker pairs as they are frequently allowed to advance unperturbed, as they constantly have an option to recycle possession and switch the ball if they face pressure from the opposition.

While the wingbacks (Hans Hateboer and Robin Gosens in Atalanta’s case), are forced to buccaneer up and down the pitch through the wide positions due to Atalanta’s centre forwards’s tendency to drift inside, the opposing fullbacks face a dilemma between marking the strikers or marking the wingbacks.

Against opponents that play with two central forwards, Atalanta enjoy a numerical advantage whereas against three-player pressing outfits (4-3-3 for instance) they can either progress the ball due to the midfielder having to commit to the wing-back and allowing them to have an easy passing option. Thus, the centre back can support efforts to overload through simple involvements with wide positioning.

Atalanta thus use their wide centre backs to overload wide areas and half-spaces in combination with their wing-backs, centre forwards and their attacking midfielder Gómez during the build-up phase to attract the defenders to one flank, while the other two defenders provide numbers in attack.

As such, they constantly have a passing option to potentially switch play, giving them the potential to overload one flank before moving the ball to the other side.

A significant feature about the image above is Berat Djimsiti’s positioning, as the Albanian defender is quickly able to adapt a position high and wide despite playing on the previously underloaded flank which would generally result in him tucking in.

This is achieved as Remo Freuler drops back to create the three (acting as one of the aforementioned centre backs on the ball) which subsequently allows Djimsiti the freedom to advance quickly. The lack of central midfield presence clearly demonstrates Atalanta’s desire to use wide areas and achieve swift overloads against shuttling defences.

They lack the central compactness to progress or recycle play through short passing interchanges centrally which thereby increases the importance of the role of the centre back offensively, as the midfield mainly play support rather than pivot roles in possession. 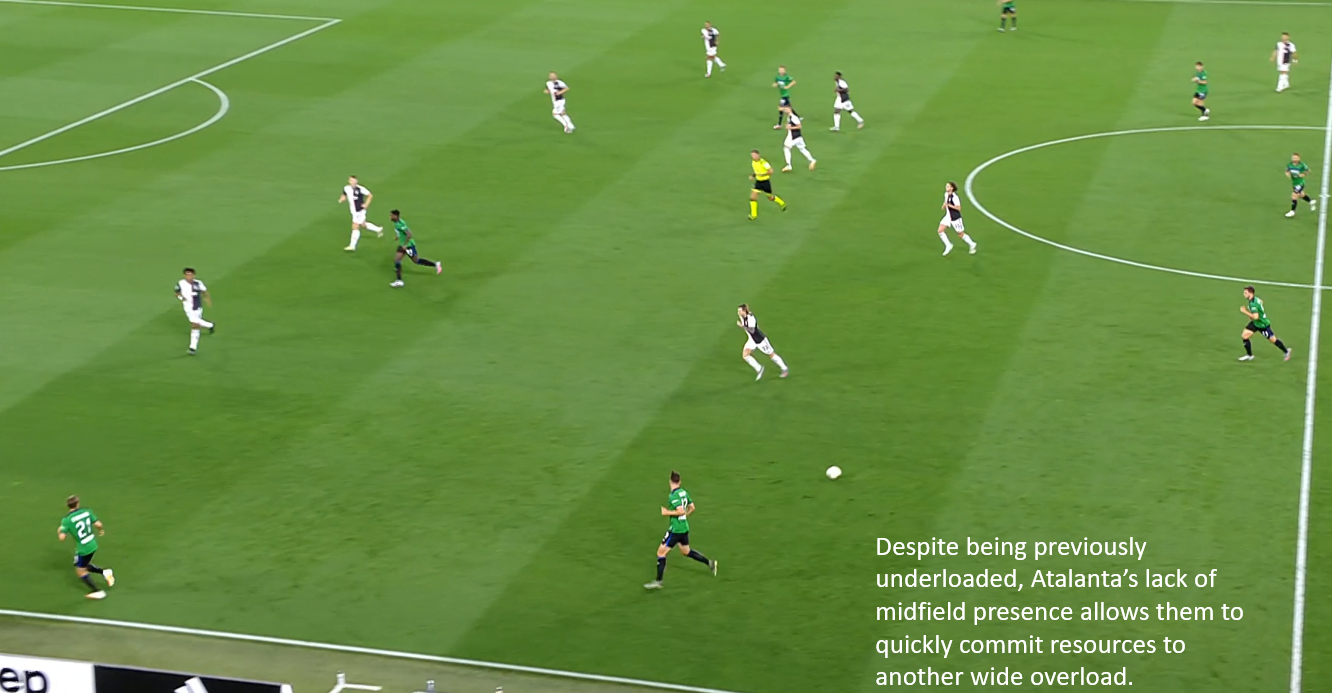 Atalanta thus use their wide centre backs to rapidly create situations of numerical parity or advantage in wide areas, which benefits them as the interplay allows them to take the initiative and progress forward while holding the potential to isolate a full back 2v1 and create an avenue of progression into the box.

The passage of play used as an example (Juventus vs Atalanta Saturday, 11 July 2020, 04:30 to 5:12) in the above series of pictures ended in a dangerous cross from Timothy Castagne to Zapata, with Djimsiti being parallel to the box. 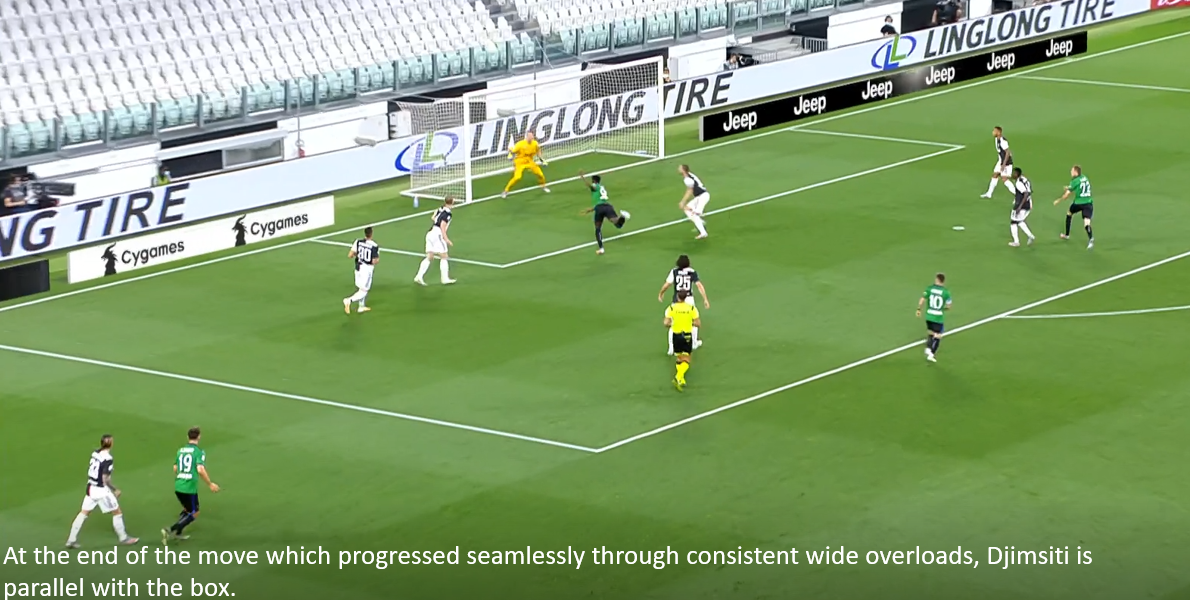 These runs by the centre backs into the wide areas are difficult to deal with as they frequently result in one of Atalanta’s players being unoccupied as the defensive side must continue to place emphasis on protecting central areas.

This results in Atalanta turning a typical weakness which teams seek to incentivise — a reliance on wide build-up and lack of central penetration — into a strength as the commitment by the centre backs combined with the rotation with the central midfielders allows them to overload, isolate, and subsequently overload again. 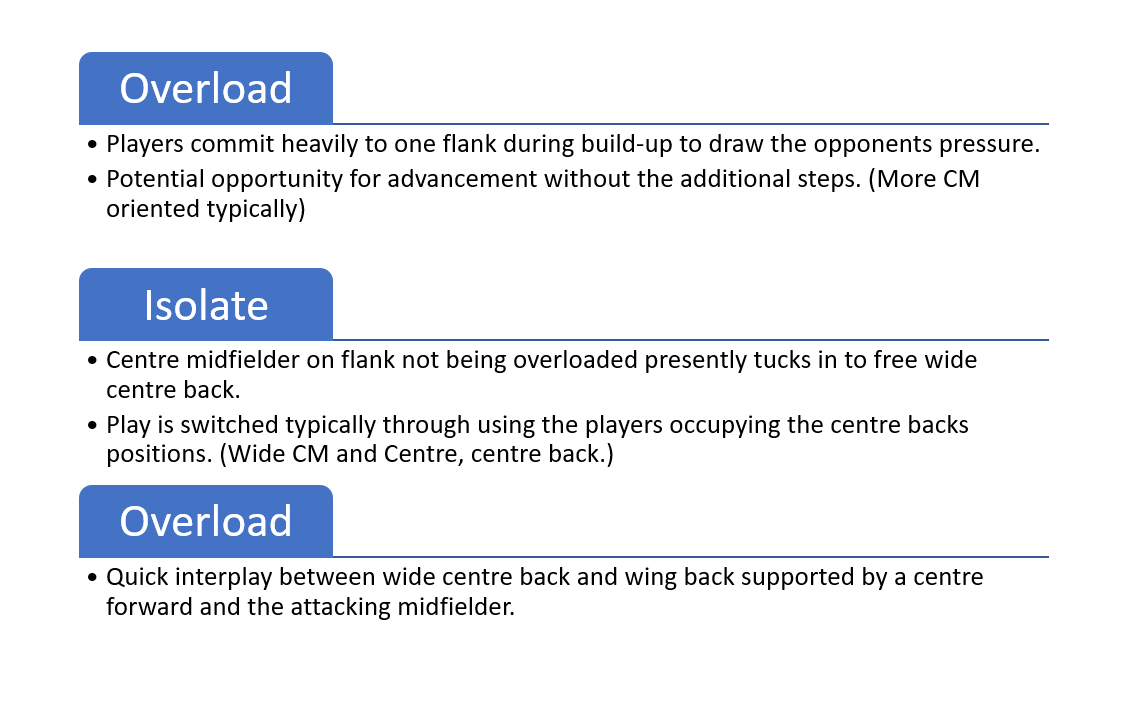 The movements themselves do not always have to be surging from depth, however, which differentiates Atalanta’s centre backs from the much discussed ‘overlapping centre backs’ of Chris Wilder’s Sheffield United. The rotations feature a degree of autonomy as the players organise themselves on the pitch within the framework of positional balance (inside passing option, overlapping player etc.) with the desired goal of overloading the wide area.

Thus, the centre back can be the ball carrier turned penetrative runner, holder (typical centre back), inverted passing option and so forth, adapting in tandem with the players around them. Paramount emphasis is placed upon the occupation of the positions, allowing for quick adaptations based on game situations.

However, the centre midfielder often tucks in on the flank which is not initially overloaded during build-up to allow the wide centre back to take a wider position to quickly link up with the wing-back once possession has been switched.

Atalanta’s players often exchange responsibilities when in possession, although the insistence to overload wide areas and quickly switch to a similar predicament allows the centre backs to play a crucial role in achieving the desired outcome, as they have the ability to speedily move to wide areas and act as an extra man during periods of progression.

Djimsiti is the most likely to advance compared to Rafael Tolói, José Palomino and Mattia Caldara, although whomever is playing out wide often has the tendency to go forward depending on which flank possession is being centered on.

When it comes to the transition from build-up to attack, the center backs play a more crucial role than the central midfielders as their positioning allows them to be more flexible to the game’s demands, and they can provide a passing option when the attempted overload is occurring, before moving backwards and across when the switch is occurring.

The centre back on the opposite flank alternatively has a deeper and wider starting position compared to the midfielder and cannot simultaneously participate in the initial overload, causing him to hold position initially and then move forward towards the touchline.

In the image below, Remo Freuler’s positioning as a midfielder in a two makes him more central, meaning he is more inclined to drop deeper to cover and provide a passing option when the intent is to quickly capitalise upon the space available on the flank.

To summarise, Atalanta’s centre backs’s wider positioning compared to the midfield two make them suitable to help link up with the flank intended to be attacked down and the depth of their movement makes them difficult to track.

This makes them vital members towards the transition to attack and the subsequent attack as they are frequently involved in possession in regions of the pitch typically not associated with centre backs.

It is true that wider centre backs in a three have a greater proclivity generally to support attacks in the vast majority of teams, but what makes Atalanta unique is their determination to use this as the main mechanism to transition and the fluidity present within the rotations.