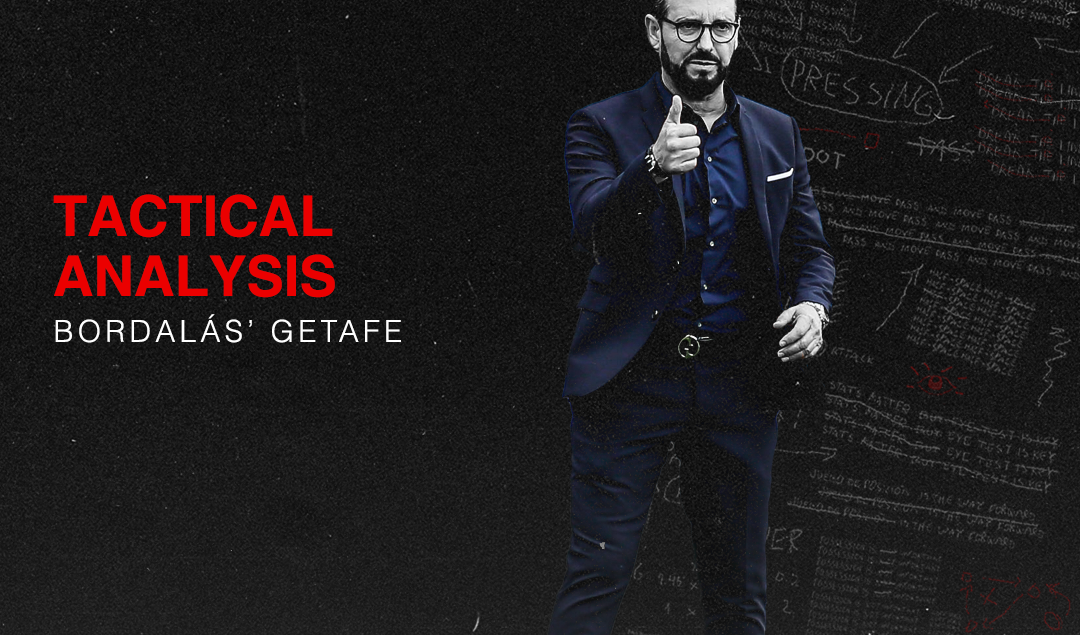 Getafe CF has been the surprise of La Liga the past few seasons. The fact that a neighbourhood in Madrid with a population of 180,000 people nearly got into the Champions League is impressive. This is mainly thanks to José Bordalás, who took the team when they were facing relegation from the second division, to nearly qualifying for the Champions League.

Either way, they qualified for the Europa League that season and did quite well, beating Ajax along the way. Their other seasons in La Liga were all in the top half, apart from this season where they suffered more and had to fight to stay in the league.

To make a small team competitive, you need to find a strong differentiating factor to be able to compete against bigger teams consistently. Bordalás found this in his famous 4-4-2 where Getafe players are pressing you intensely throughout the whole game.

Now that Bordalás will be Valencia CF’s new manager, it will be interesting to see his playing style and how he will look to make Valencia a competitive team again. After two complicated seasons, Valencia has looked to Bordalás to become the new leader and the man to make them recover good sensations.

Getafe has specialised in maximising the 4-4-2 formation because even with players of lesser technical ability, their impressive intensity and playing style is allowing them to become a very solid team. Down below we can clearly see their formation in action. It is notable how compact the team is. As usual, the main purpose of this formation is to deny the opponent entry through the middle. For that, the team has to shift very well together and there has to be little space in between lines. 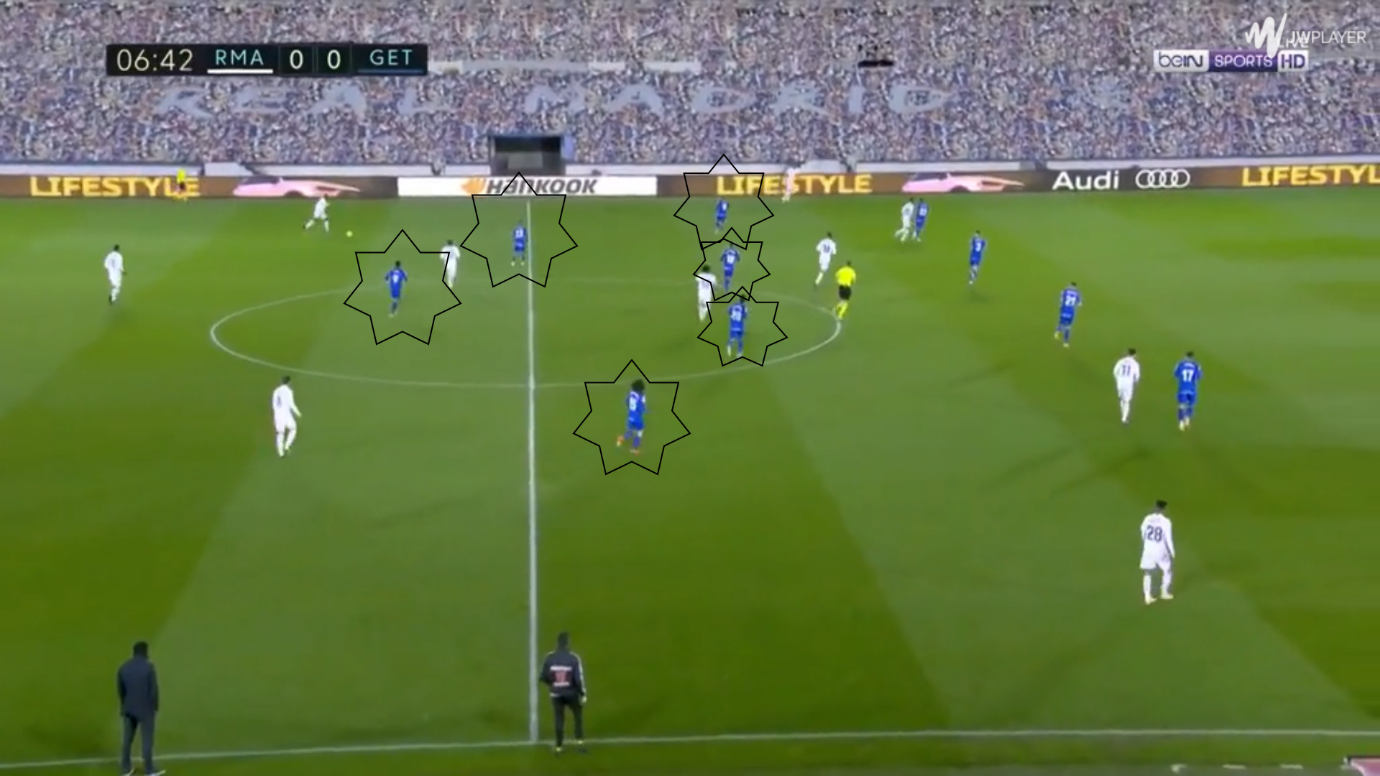 Getafe are a hardworking team that don’t usually leave gaps in their formation. To do so, they have their whole team compact. Special emphasis has to be placed on the little space they allow specifically between their midfield and defensive lines.  Getafe knows that this is the danger zone, as if an opponent receives here and turns around, they can run towards the goal and be a threat.

In the image below, we can appreciate how close together the midfield and defensive lines are, with the centre-backs ready to pounce if the opponents receive there. By being so compact, it allows for Getafe to not feel the superiority in numbers that the opponents might have in midfield.

For example, if the opponents play a 4-3-3, they have three midfielders compared to Getafe’s two. However, if Getafe does not allow space through the middle, the opponents cannot take advantage of this numerical superiority. This is why Getafe allow themselves to sacrifice another player in the midfield, to have an additional striker who helps in pressuring high and playing direct football. We will talk about this later on. 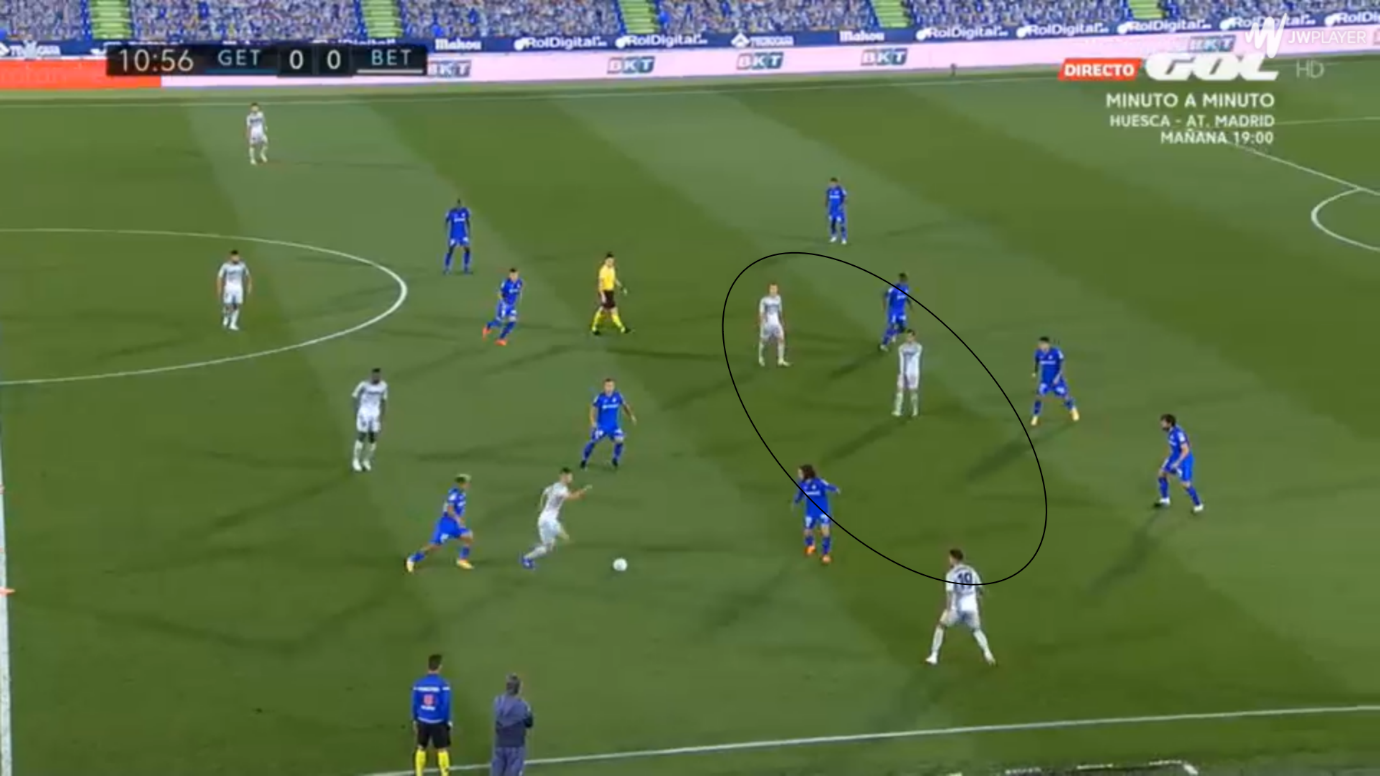 Moreover, apart from being a compact team, Getafe’s centre-backs are brave and told to follow their marker if they receive between the midfield and defensive line. It is hard enough for the opponents to get the ball into this area due to the little space, but if they do, Getafe’s centre-backs are immediately pressuring the player who received the ball so that he does not turn around.

In the image below, a Getafe centre-back is leaving his position to intercept a pass being made to an opponent receiving in between the lines. We can see how far he has come up to avoid this pass being made. In this instance, it was effective as he cleared the ball. However, if not done well, this strategy leaves huge spaces in behind. Therefore, Getafe’s centre-backs need to be brave and very solid, as well as not being afraid to foul the player if he manages to evade the pressure. 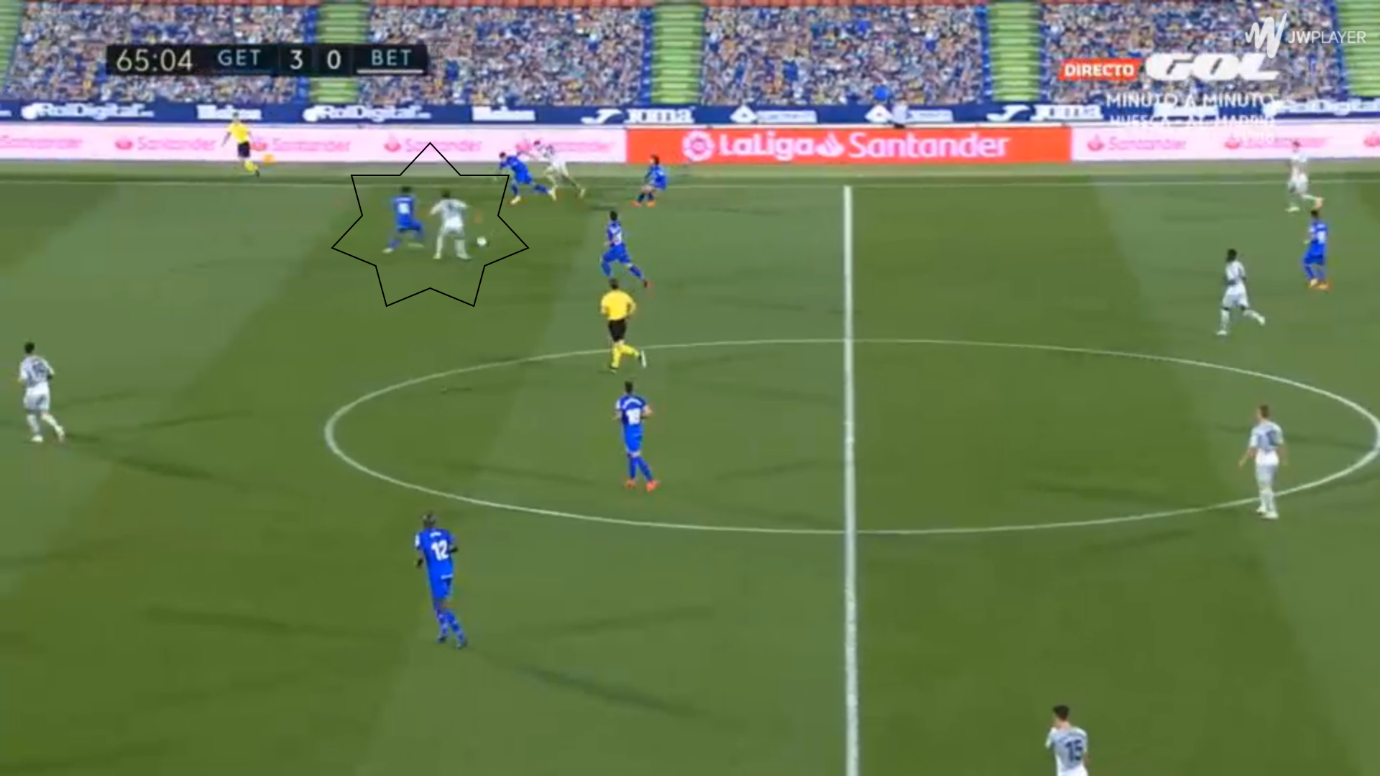 Many people in Spain think that Getafe is a defensive team because of their reputation for making many fouls. This cannot be farther from the truth. Getafe are a team that press their opponent without fear. They are a very intense team who go and look for you in your own half.  In fact, in the 2019/20 season, Getafe were the team in La Liga who defended the highest up the pitch, and had a PPDA (passes per defensive action) of 6.97, the lowest in La Liga. With this metric, the lower the number, the more intense is your press. These stats were offered with the help of StatsBomb.

Once again, their main objective is to force opponents to play into the wing, where there is less danger. The two strikers will man-mark the two centre-backs and close down the middle. Therefore, the only available option is to pass into the full-back. Once this pass is made, all nearby Getafe players close down the full-back’s passing options.

At the same time, we can see how the Getafe left-winger is already making his way to the opponent right-back, as he can sense that a pass will be made here. This is because the opponent’s centre-back has no clear options through the middle. 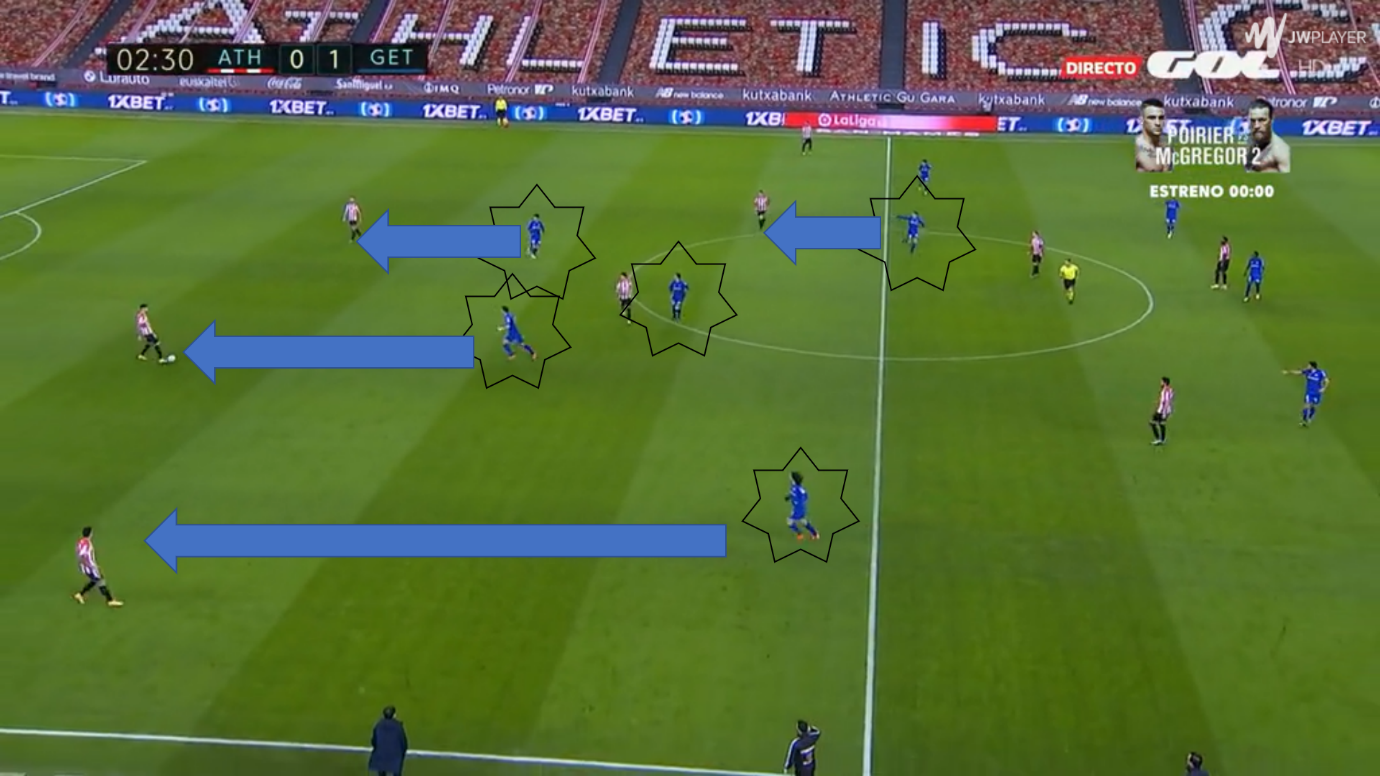 The best example is shown below in the game against Ajax in the Europa League. Ajax is a club that like to dominate possession and play out from the back. Getafe knew this and adapted well. In the first image, we see that the left-winger is in between the Ajax midfielder and right-back.

Depending on who the pass goes to, he will sprint to that side. Getafe’s left-winger is confident in his pace to make up the space needed. The rest of the players stay the same, marking the same players we mentioned before. 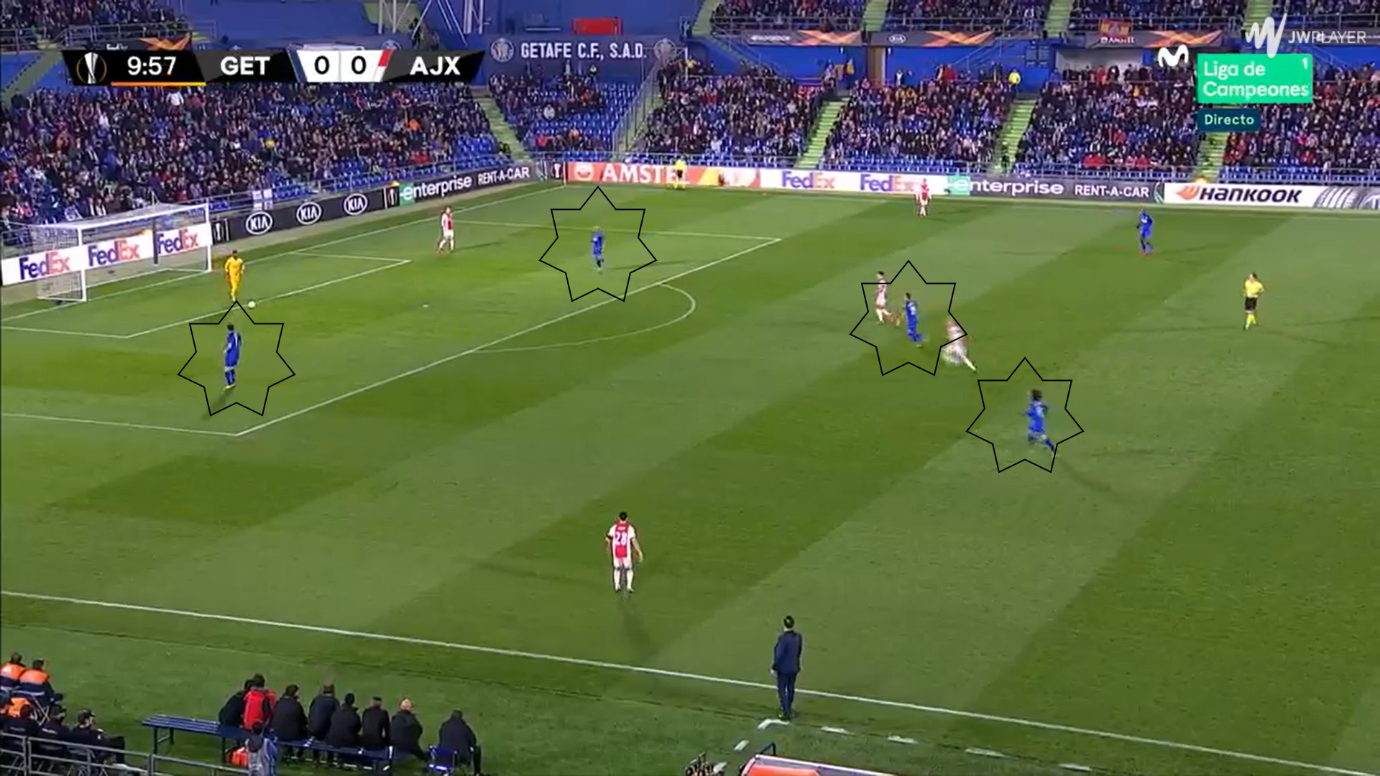 In this second image, we see how the pass was made into one of the midfielders and how Getafe’s left-winger is sprinting to mark the other midfielder. However, he does not need to as Getafe’s midfielder has pressed so intensely, that they have stolen the ball in that area. 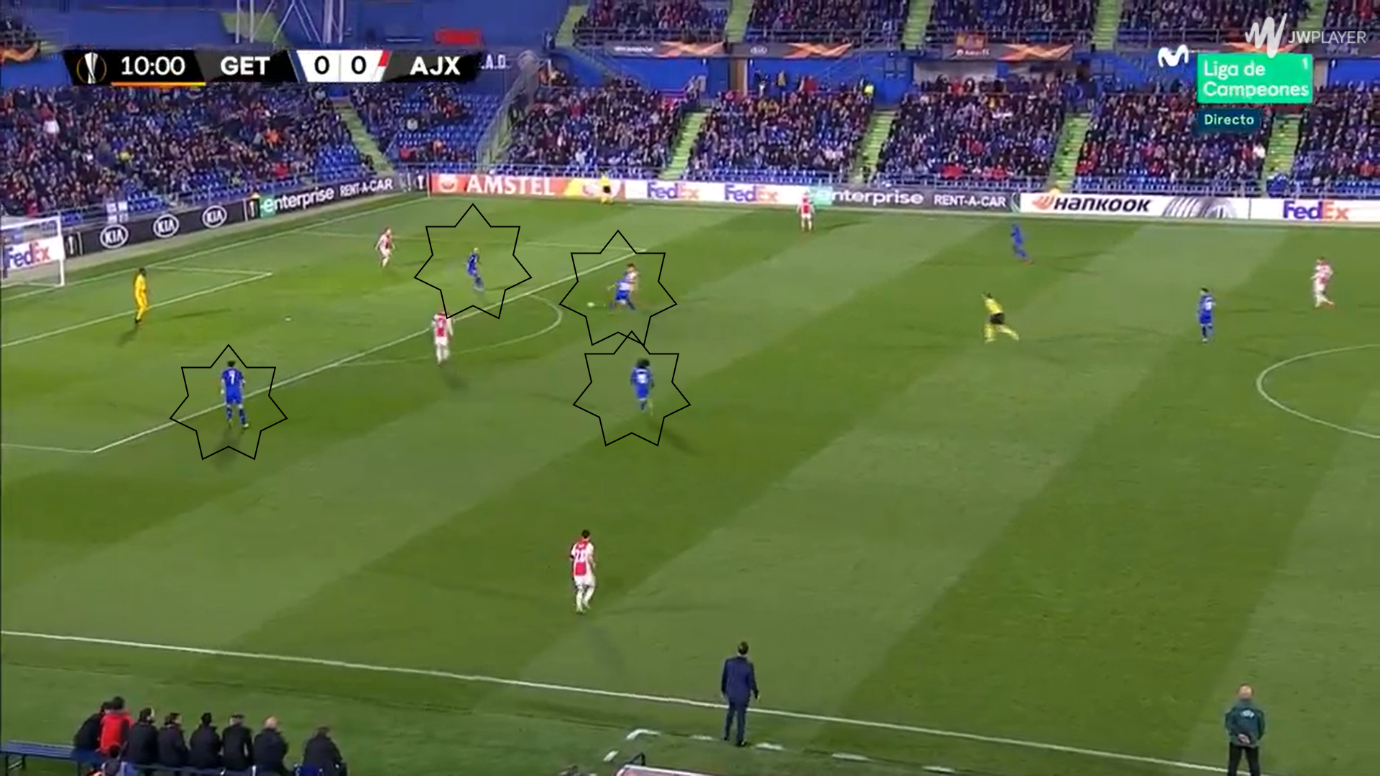 Moving on the attacking style, Getafe are not the team to go watch “beautiful” football. They employ some of the most direct football in the continent. They understand their strengths and weaknesses and know that they do not possess the technical quality to play a more passing, dominant game. Every team adapts to their necessities and possibilities. Getafe has done so perfectly, finding an attacking system that creates danger in few passes.

In fact, one of the reasons Getafe presses so high is because, if they do steal the ball, they need few passes to shoot.  In the following images, I will show you Getafe’s favourite way of attacking. As we can see, the right-back had the ball and has made a long ball into one of the strikers. If the striker can make something of that ball, control it and create danger, then perfect. However, if there is an aerial duel and the striker loses it, Getafe are like lions in search of that rebound. 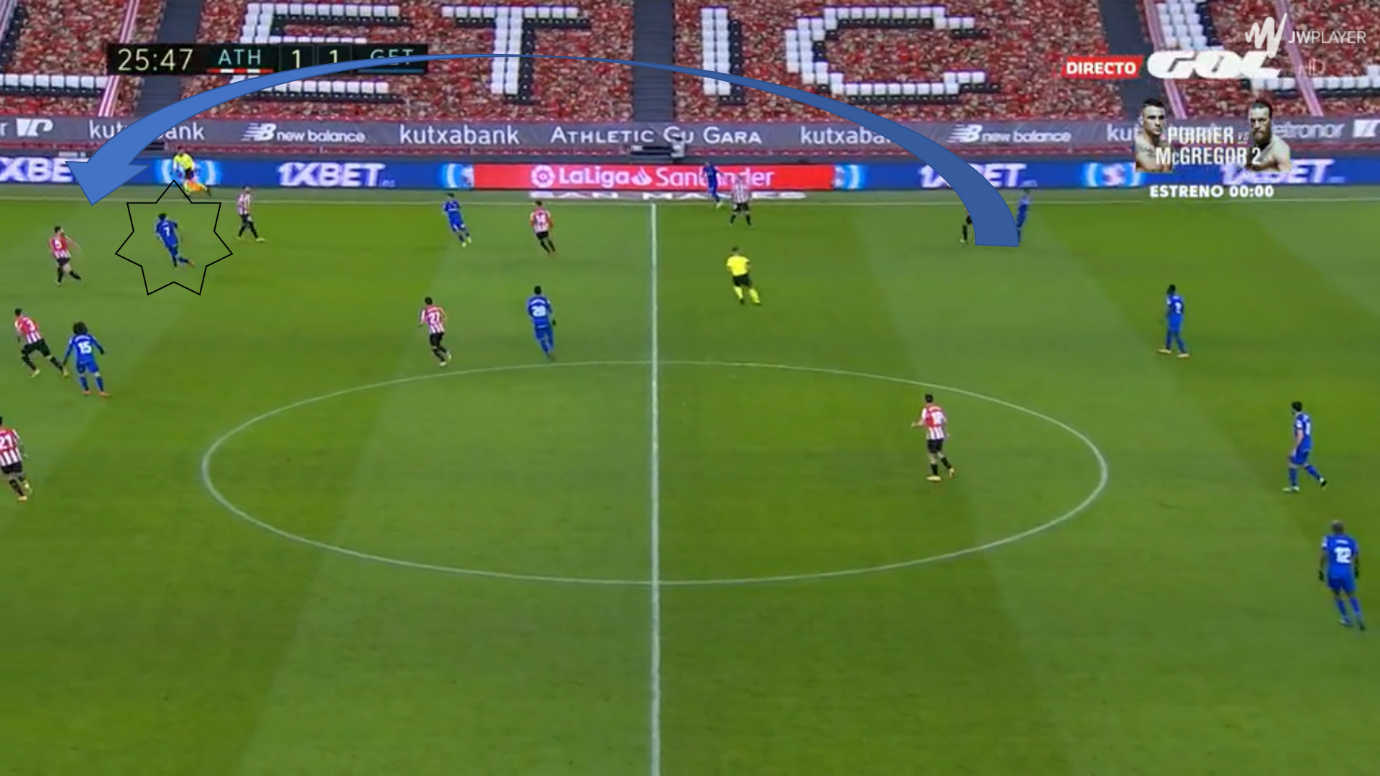 In the second image, it is clear that the opponent defender won the header, but the rebound has gone to the right-back again, who has quickly advanced to be near the duel for the second ball. From this situation, Getafe will attack again in a direct manner, understanding that after the aerial duel, the opponent’s defence is displaced. 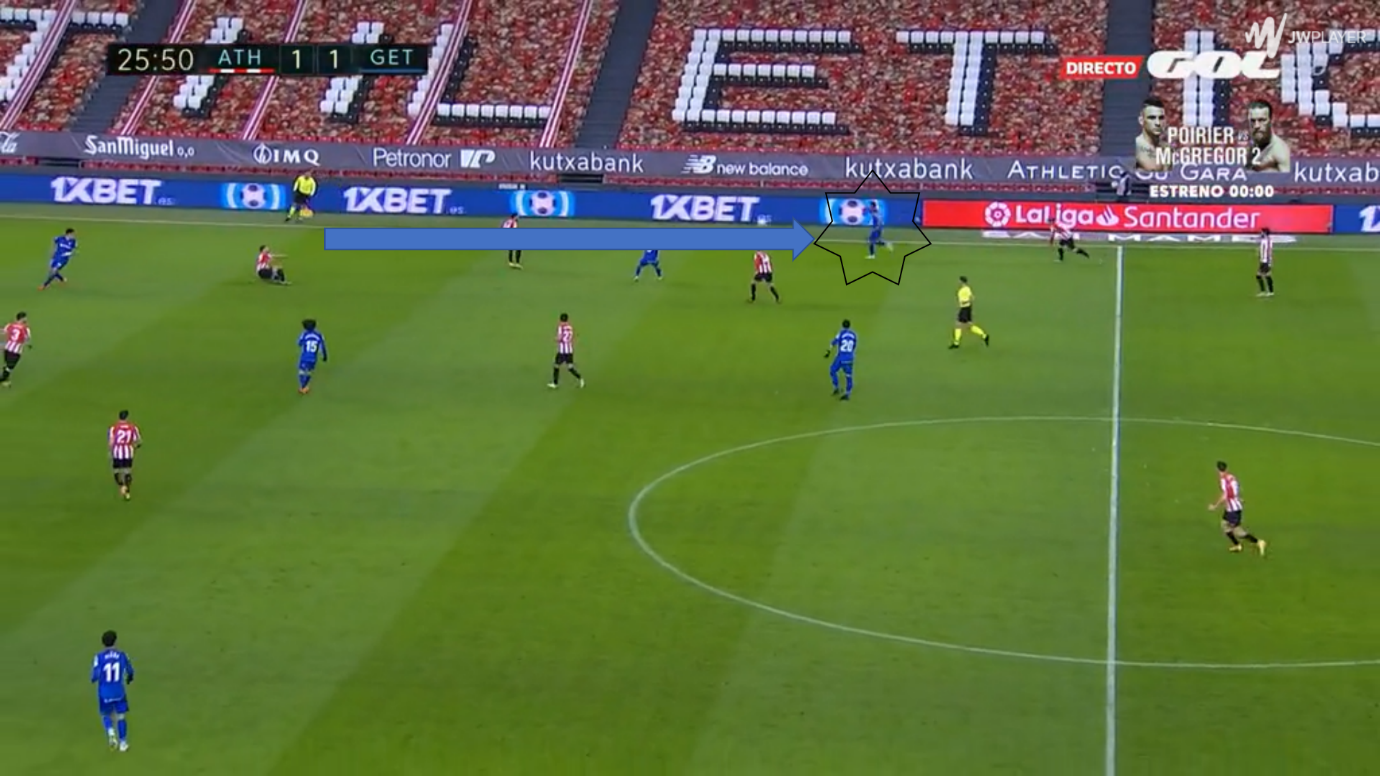 Another example of their direct attack is the following action which led to a goal. Once again, the centre-back does a long ball to a striker. The striker wins the duel and it becomes a through ball for the oncoming teammate who is now through on goal. It is important to say that in the build-up, the midfielders rarely touch the ball. Getafe’s centre-backs usually just kick it up. 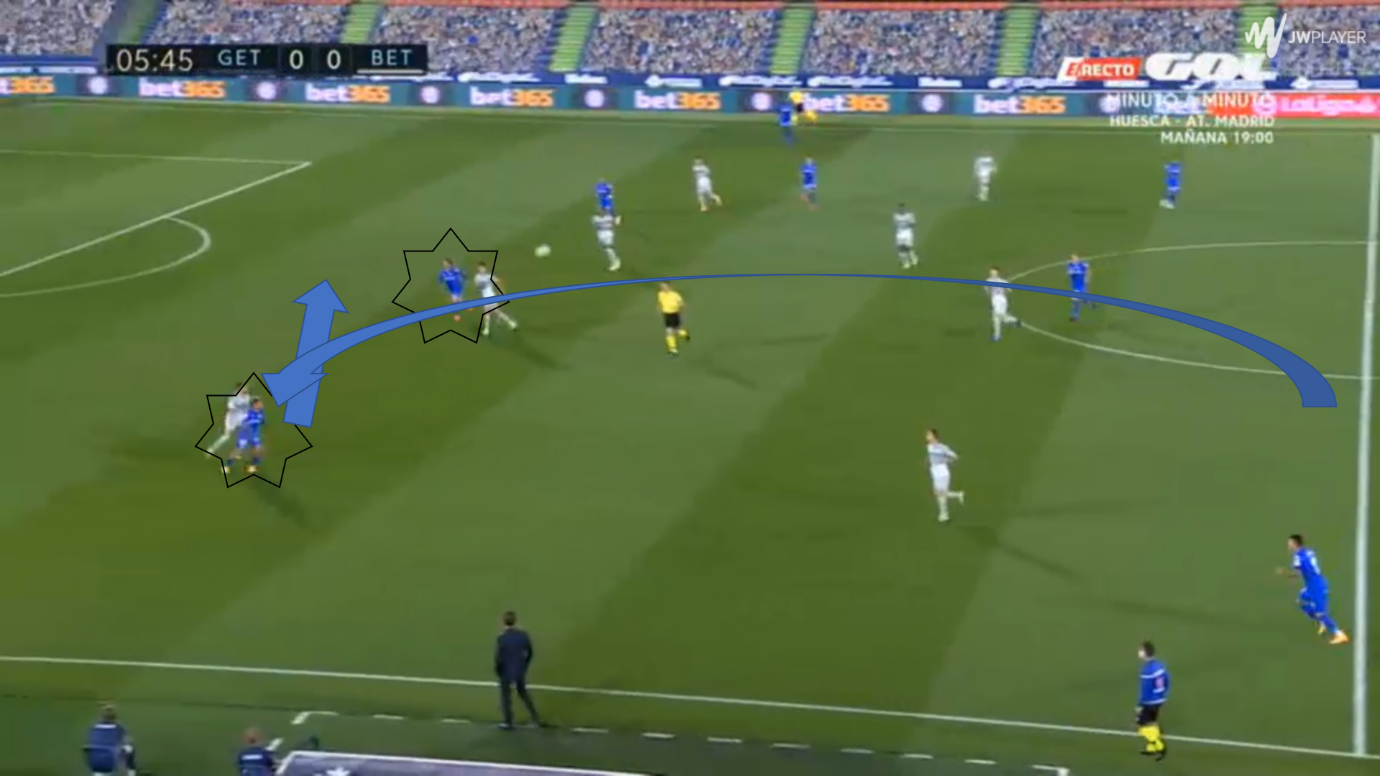 When talking about Getafe, I just have to mention the reputation they have gained of being dirty competitors. They are known to be a very rough team that makes many fouls, sometimes nasty ones. They are also disliked in Spain because they waste a lot of time during games and are in general, quite dislikeable.

For example, since Getafe came back up to La Liga in the 2017/18 season, they have been the team who have committed the most fouls every season. They have also been the most yellow carded team for two seasons.

Moreover, by February of this season (it’s the last data set), Getafe were the team in La Liga who played the least, with 48:36 minutes being played on average in their games. Therefore, you can say that all these accusations have some truth in them.

Overall, what José Bordalás has done is impressive. He has managed to make a historically small team a competitive and well-respected one who has fought for European positions. Bordalás has found a differentiating factor that makes his team special and exploits it. Being a Valencia CF fan, I am very excited about his arrival, as the fanbase believes he can be the man that turns around Valencia’s situation in the past years. I am looking forward to being the most hated team in La Liga.