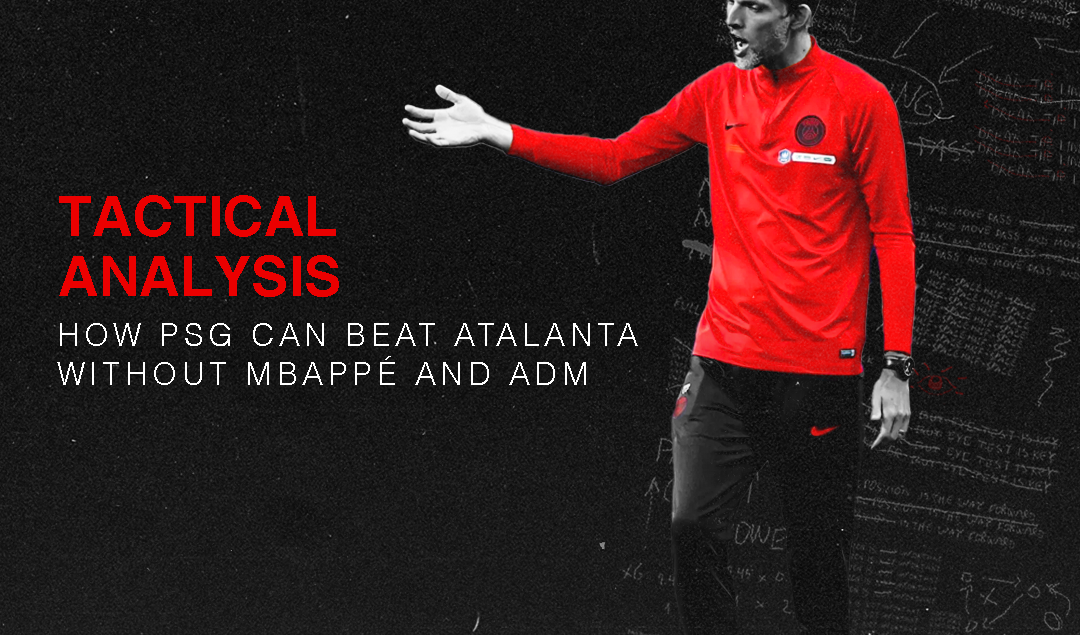 With Kylian Mbappé’s ankle injury against Saint-Étienne and Ángel Di María’s suspension that will prevent him from playing in the Champions League quarter-final, not only will Paris Saint-Germain be forced to face Atalanta without two of their best players, but they will also be deprived of two of the main players who helped make Thomas Tuchel’s 4-4-2 formation work offensively.

To replace these two, the German coach will surely have to consider making tweaks to his attacking system or changing the formation altogether.

At the beginning of the season when Mbappé and Neymar suffered from muscular injuries and could not be available together, Tuchel also had to adapt and find a system that suited the players at his disposal at the time. The base of that system was a 4-3-3 formation, with an emphasis on a high-pressing game and an organized defensive structure.

To make this work, Tuchel fielded a midfield trio consisting of Marco Verratti, Idrissa Gueye and Marquinhos. Verratti and Gueye advanced high up the pitch to put pressure on the opponent and win the ball back in advanced positions, while Marquinhos sat in front of the defense to free them and support the center-backs.

Defensively, this system was a great success as PSG registered 10 clean sheets in 13 games, including three against Real Madrid, Lyon and Andre Villas Boas’s Olympique Marseille, with only one big chance conceded in these 10 games. PSG were also able to create several chances thanks to the excellent pressing of Gueye and Verratti.

However, this formation did not really function well when PSG had possession, as neither Marquinhos nor Gueye could consistently offer good solutions when they had the ball.

The two players also had difficulties when opponents tried to put them under pressure by giving them few time on the ball, which could be a big issue if PSG played in this lineup against an Atalanta side that also relies heavily on a high-pressing game.

Moreover, the average attacking impact from the fullbacks also meant that PSG had to depend greatly on the individual brilliance of Verratti and Di María to create goal-scoring opportunities. This should be even more significant against Atalanta as left back Juan Bernat is not expected to be fit enough to start and because of the pure defensive nature of Thilo Kehrer.

A Starting Place for Leandro Paredes?

One solution for PSG’s build-up problems would be to start Leandro Paredes in front of the defense, as his game vision and excellent technical abilities would improve the team’s ability to play under pressure and initiate attacks from the back.

Nonetheless, the Argentine’s general low work rate without the ball as well his defensive limitations could make him a liability defensively against an excellent attacking team like Atalanta.

Another possibility would be to play Paredes in midfield alongside Marquinhos and Verratti.

This structure would allow PSG to protect Marquinhos against Atalanta’s high-pressing by making him push higher when the team has the ball in its own half, while Verratti and Paredes would drop to the sides to help the team bypass the pressure imposed by Atalanta. This is an animation that has been used for years by Zinedine Zidane’s Real Madrid to protect Casemiro during the build-up phase.

Yet, Paredes’ lack of mobility could be an issue to defend the width of the pitch properly knowing that Atalanta also create many of their chances playing down the wings. The no. 8’s inability to cover large distances without the ball or press high throughout the match also makes it highly improbable to see this lineup on August 12th.

Switching to a 3-4-3 shape with Marquinhos, Silva and Kimpembe behind could also be another possible solution for Les Parisiens as it’s a formation that we have seen Thomas Tuchel use occasionally. The main issue, however, is that playing three center backs would also mean a drastic change to the team’s defensive system, which would be difficult to get the players to digest with only two games before Atalanta.

As an alternative, Tuchel could  set up his team in a 3-4-3 in possession which turns into a 4-4-2 when PSG do not have the ball, by playing Kehrer and Colin Dagba at the same time.

This is a system that PSG used in their two matches against Manchester United last year, with Dani Alves playing as a right midfielder when PSG did not have the ball, and as a right wing-back when PSG had possession.

Nonetheless, PSG would need a significant contribution from their wing-backs offensively to attack well in this 3-4-3 formation, which can be complicated as neither Dagba nor Kehrer can provide the needed attacking solutions in the final third.

Another option for Tuchel would be to play in a 4-2-3-1 formation with Neymar at the no.10 position and Julian Draxler on the left to replace Mbappé. In general, this system is quite similar to Tuchel’s 4-4-2 in terms of the principles behind it:

However, the main difference in this 4-2-3-1 is Neymar’s role and how the team can find him between the lines when PSG play from the back. As teams try to crowd the center of the pitch and force the ball wide, Neymar’s positioning in the middle makes it harder for the central midfielders to find him directly with a line-breaking pass.

A good solution would be to pass to the wingers positioned in the half-spaces with the no. 10 used as the third man, which PSG have used in the few matches in which the team played in 4-2-3-1 this season.

Another possibility would be to defend in a 4-4-2 shape with Neymar moving up front when PSG do not have possession. This would allow the team to defend in a system that the players know very well and also keep the Brazilian fresh to pounce on attacks without having to track back and defend his wingback.

The downside of playing in this system, of course, is that if Draxler started the match, PSG would have only Eric Maxim Choupo-Moting and teenage striker Arnaud Kalimuendo as attacking solutions on the bench.

Finally, it would not be surprising if Tuchel decided to keep this 4-4-2 formation and replace Mbappé with Choupo-Moting.

While PSG would definitely miss the the high quality runs behind the defense that Mbappé offers as well as the impeccable connection he had with Neymar on the pitch, there might not be enough time to work properly on implementing a new system of play just before the biggest match of the season, especially since Les Rouge et Bleu have only two matches to play before facing Atalanta.

Playing Sarabia upfront and Draxler on the right could be another possibility, even if the German winger is not used to playing on the right flank. But like the 4-2-3-1, it would make the bench emptier than it is with the non-availability of Mbappé and Di María, and the departure of Edinson Cavani.

No one solution seems unquestionably better than another, but due to the variety of game plans used by Thomas Tuchel since he joined the French club, he at least has the advantage of not being a prisoner of his preferred 4-4-2 formation.

However, given the high importance of the match against Atalanta, it would be logical if the German coach decided to go for the option he finds to be the least risky out of all these formations.

Is it going to be the 4-4-2 with Choupo-Moting and Sarabia replacing Mbappé and Di Maria post to post, or will we see another system put in place? The upcoming matches for PSG against Lyon and Sochaux should probably give us clues about how Tuchel plans to replace two of his best players.