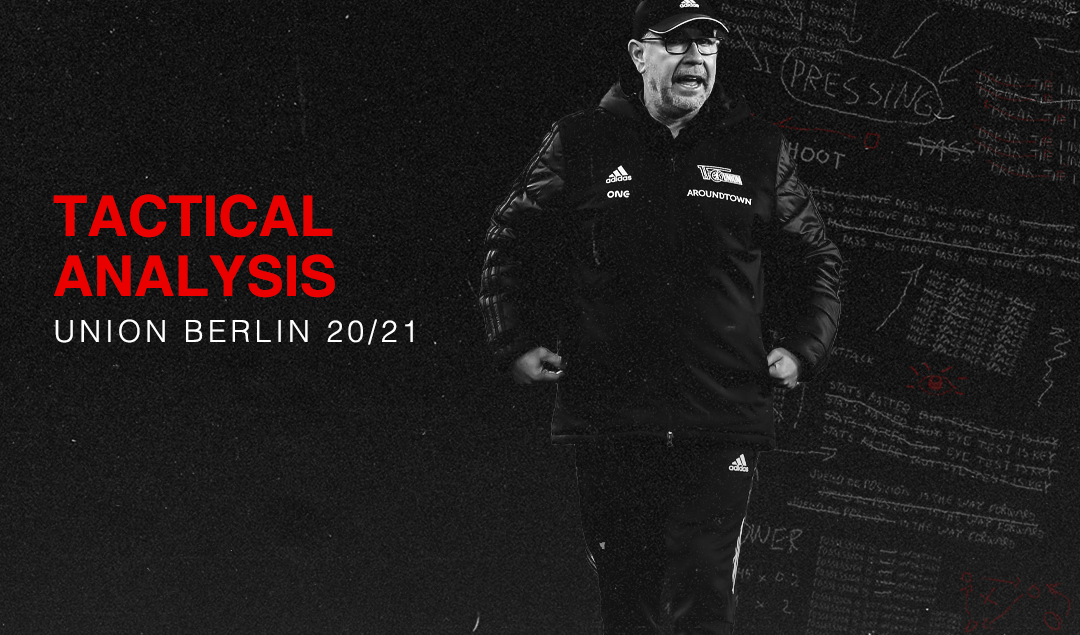 In only their second ever Bundesliga season, 1. FC Union Berlin managed to improve upon their already impressive debut season and qualify for European football. Coach Urs Fischer has done a remarkable job with the East German club and earned what is probably his greatest managerial achievement through very good coaching. In this article, I will aim to describe the tactics implemented by the Swiss to reach the European frontier year ahead of schedule.

The best place to start is with Union’s best quality, their defensive ability. Since his arrival in July 2018, Fischer has implemented a solid system that saw them promoted from Bundesliga 2 with the best defensive record and achieve European football with the 4th best defence in the league (5th best on expected goals conceded). They set up using a ball-orientated system, meaning they use a ball as a reference point and shuttle to mark the ball-side options aggressively and cut off the central passing options.

The aim of this is to force the opposition wide and make reception extremely difficult for them. In particular, the midfield pivot and the fullbacks are aggressive in following their man to make backwards reception difficult. In open play, they always initially sit in a mid-block. These two are the fundamental aspects of Union Berlin’s defence and are present regardless of the formation used. 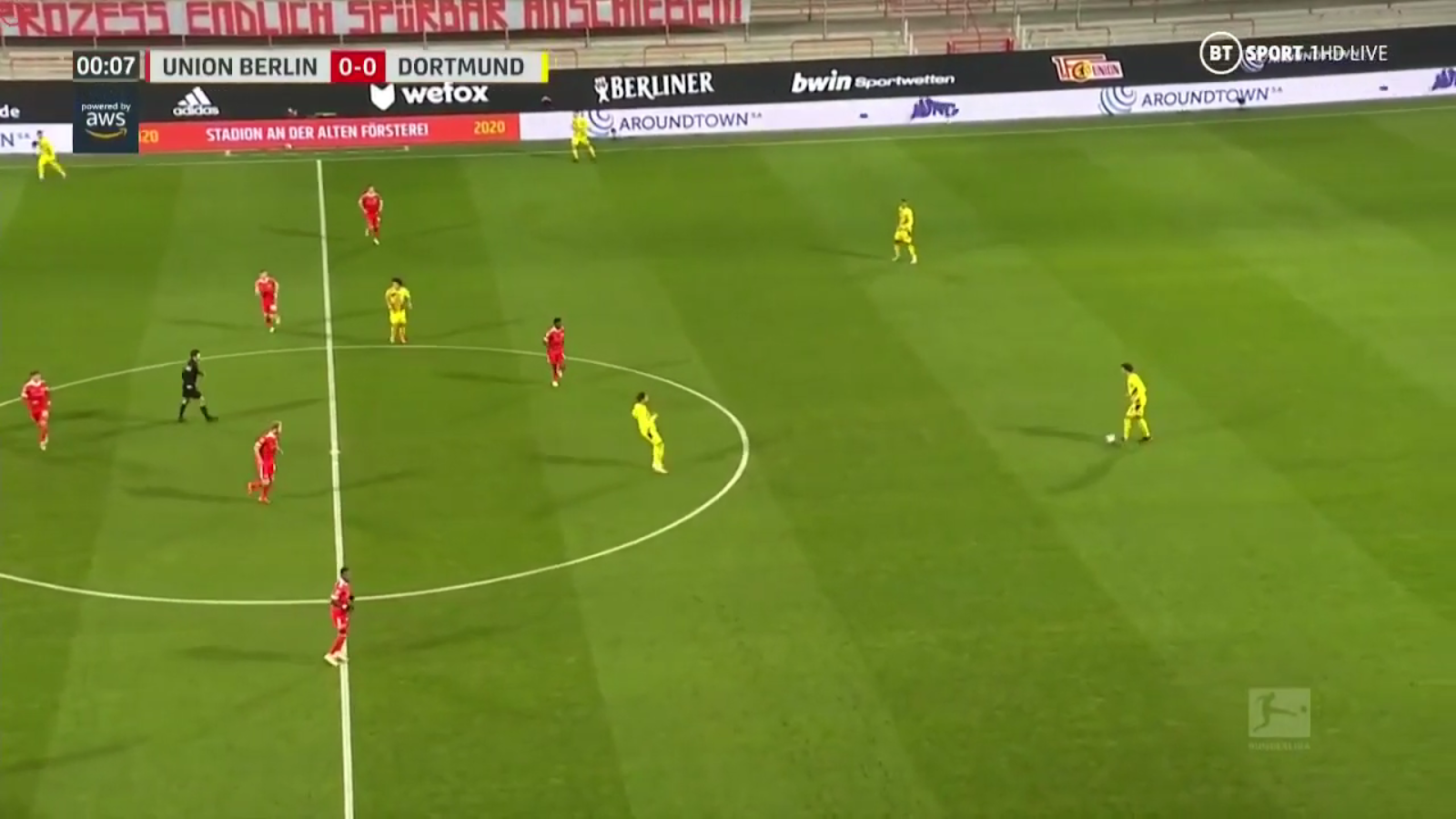 Figure 1: Playing a 4-1-4-1 vs Borussia Dortmund, this is also how they set up defensively 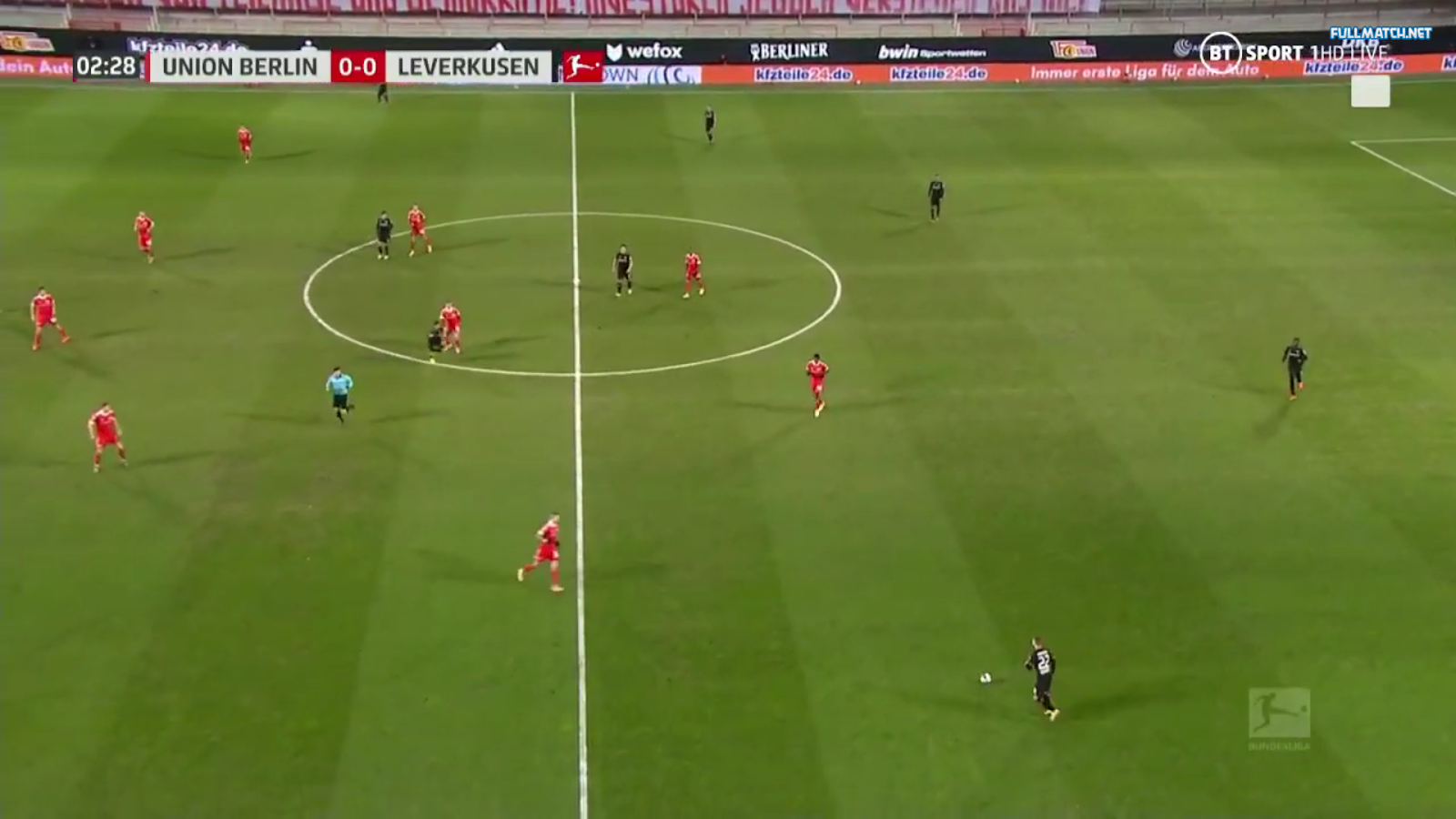 Union Berlin are quite flexible in their formation choice, alternating between 3-man and 4-man defence variations, and as shown, the fundamentals of their defence stay the same. As is often the case with a 3/5 at the back, the centre backs are given the licence to be very aggressive in following their man deep. 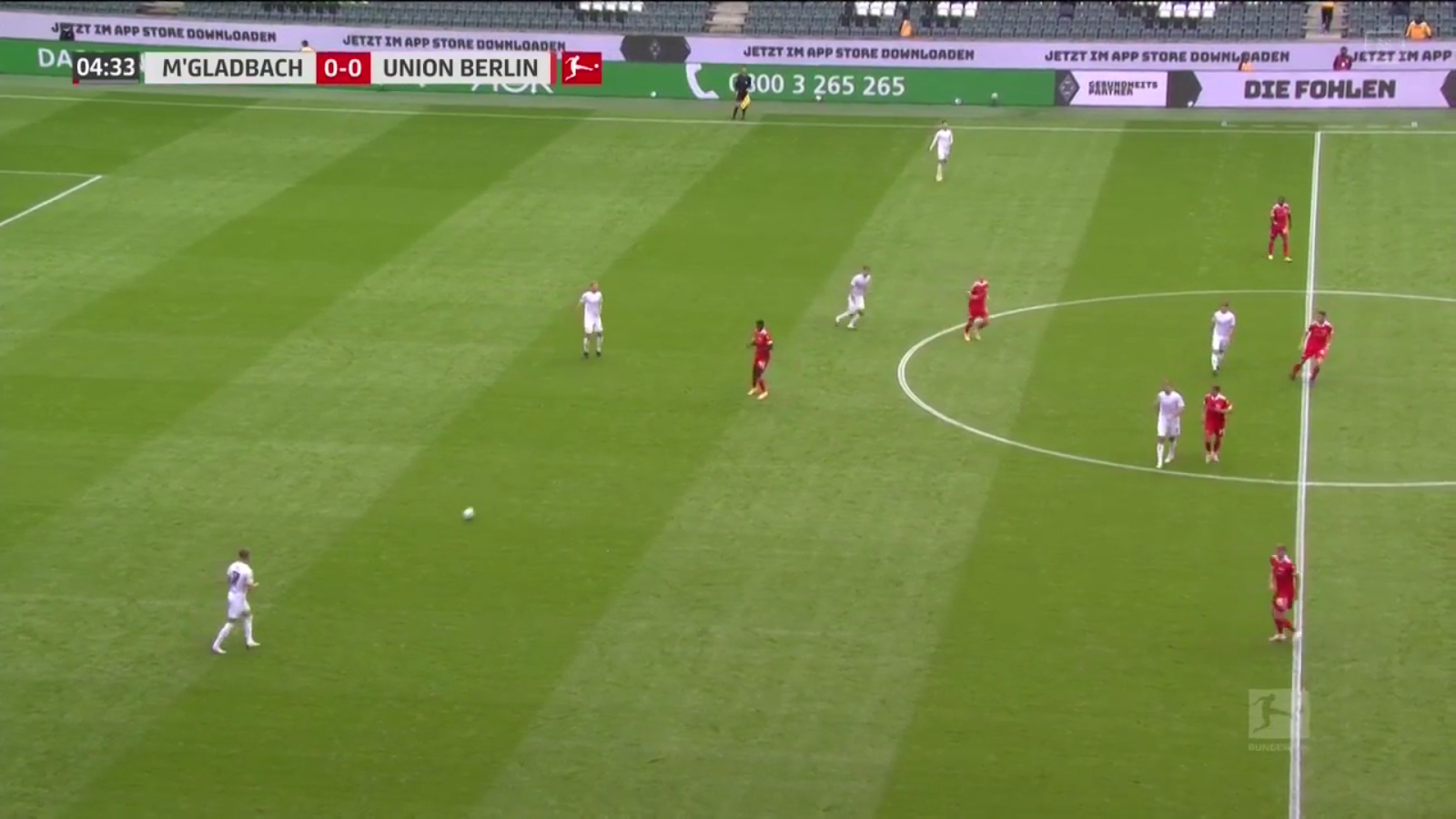 This tactic means that the midfield 2 does not become overloaded and positional rotations by the opposition to create space in the middle is negated. As we can see above, after Robert Andrich presses Florian Neuhaus who attempts to form a back 3, Friedrich allows the midfield to remain compact with good defensive connections to prevent central progression. We see this same effect when they play with a 1-4 midfield, with the anchor filling in the gaps left by the pressing pivot player and temporarily defending in a 4-4-2 shape.

In this mid-block, Fischer has also implemented some basic pressing triggers. As mentioned above, Union want to encourage the opposition to play down the flanks where they can use the touchline as a defender to constrain the playing area further in addition to central options being immediately pressured. Forcing the opponent into long balls would also be a preferable outcome with all the centre backs being comfortable in the air and able to deal with physical strikers.

Common triggers to initiate pressure is either the ball crossing the halfway line, a midfielder dropping to become an option near the halfway line or the outside centre back being in possession. The extent of their passiveness in the attacking third is shown by the fact they have the lowest pressing intensity in the opposition half, denoted PPDA (passes per defensive action), in the Bundesliga.

The figure is 15.81 (via Understat). However, in the middle and defensive third, they are more intense with the 2nd and 5th highest proportion of pressures in these areas respectively (via fbref). They are successful a respectable 31.8% of the time, good enough for 7th best, behind the typical high-pressing sides such as RB Leipzig, Bayern Munich, and Borussia Dortmund.

When the opposition has gained more territory and are in Union’s defending third, they will fall into either a 5-4-1 or a 4-5-1 block, giving them the adequate cover of all horizontal lanes while leaving a striker high as an outlet. Occasionally, it will be a 5-3-2 which morphs into a 4-4-2 when the ball-side wing back pushes forward to press the winger and restrict progression down the flanks.

Figure 4: Vs Bayer Leverkusen, the wingback jumped forward to make a 4 in midfield and stop the winger

From opposition goal kicks, the team look to press high in a man-orientated manner, with the aim being to force the opposition long. While this can leave massive space in the middle of the pitch, they are comfortable leaving their centre backs to win aerial duels and will have the midfield pivot to protect the middle of the pitch. The right back, captain Christopher Trimmel will also stay deeper to form a 3-man defence. 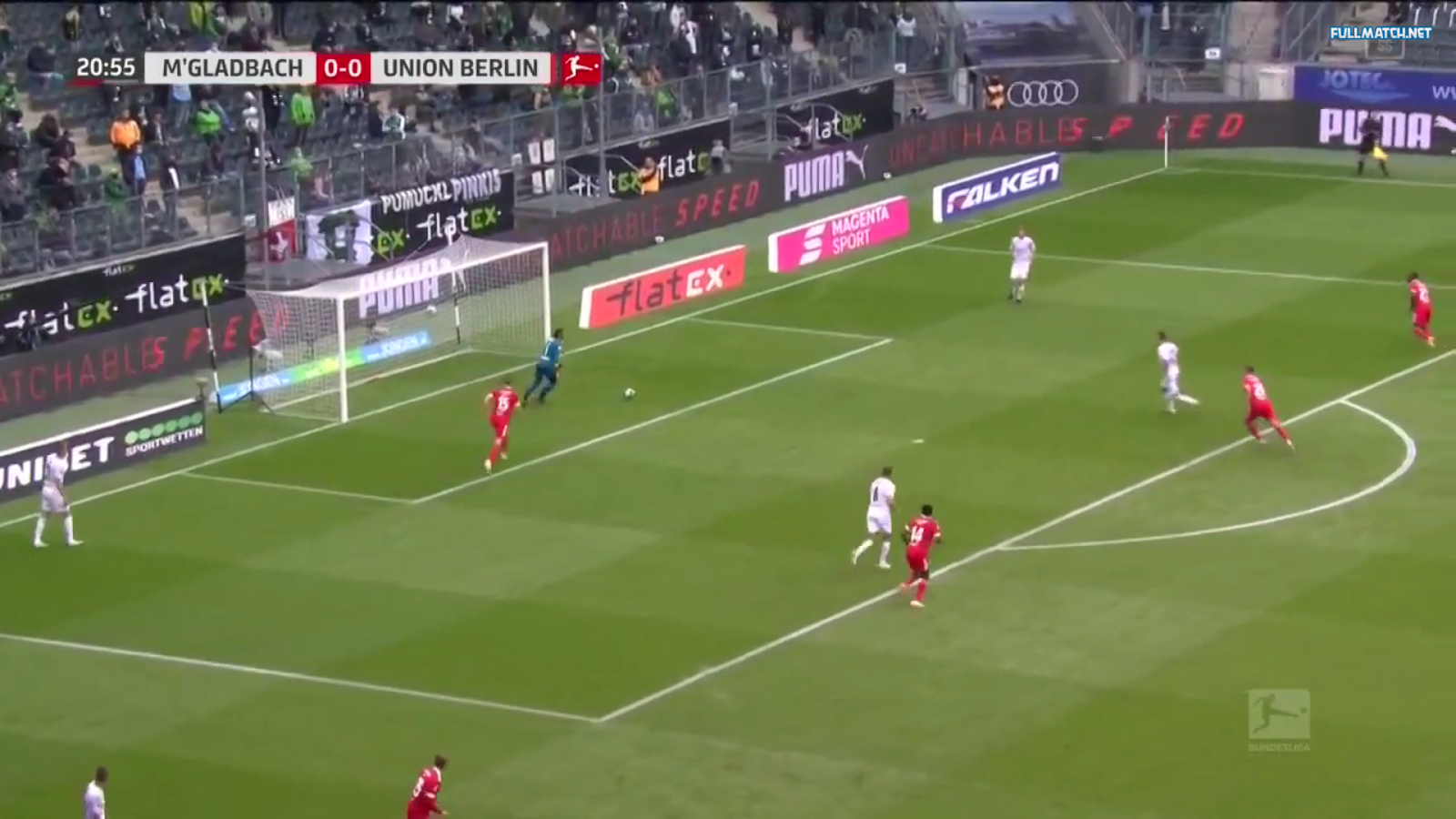 In defensive transitions, they open themselves to opportunities due to committing the fullbacks forward. We will come onto their role in possession later, but teams have often attacked the flanks in transition as Union can often be caught out with just their centre backs and a lone midfielder. The players that remain back prioritise protecting the centre while the retreating players attempt to force the attackers wide into less threatening areas.

As with any system with an emphasis on tracking opposition player movements, Union Berlin are at risk of exposing space that can be exploited but, on the whole, Urs Fischer has mitigated this threat well throughout the season. The ball-sided nature of the defence has also seen them overcommit at times and leave the far-side uncovered and exploited by quick switches or deep crosses.

There are also a few defensive deficiencies caused by personnel weaknesses. There is not much pace among the backline, so they are susceptible to balls in behind and into the channels. The fullbacks, in particular, can switch off when defending in the box leaving strikers with good movement free in space.

In possession, Union Berlin are a direct team that look to move the ball up the pitch as quickly as possible. They are quite old-fashioned in the way they set up to achieve this. Their main striker, Liverpool loanee Taiwo Awoniyi, is a powerful forward who can hold the ball up well and run the channels. They look to either work the space for the direct pass to isolate Awoniyi against a defender with players running off and underneath him. 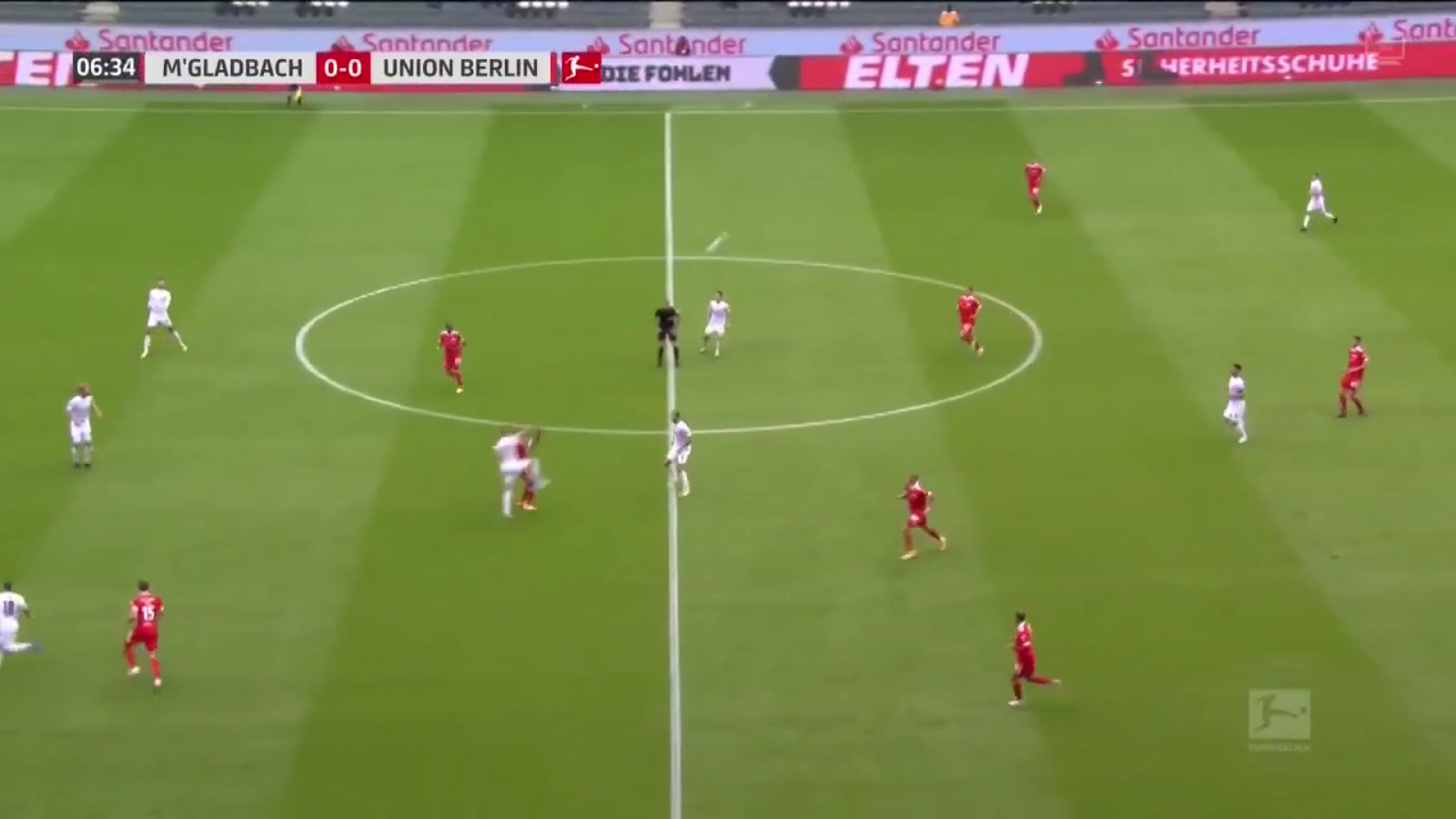 Figure 6: From a goal kick, as they often do from open play, Awoniyi is the target with diagonal options ahead and under

They do not dominate possession, doing so on only 7 occasions this past season, and when they do have possession of the ball, the first thought is to go forward. They are 4th for the proportion of passes played long (23.55%) and 1st for aerial duels contested (42.2 per 90). Because of this, they have no qualms about clearing the ball when under threat, rather than attempting to play through the danger as many more technical teams attempt.

Another important player Sheraldo Becker, a traditional right winger who looks to get down the line and get crosses into the box. On the other side, Marius Bülter will invert to get closer to Awoniyi for layoffs and to offer more numbers in the box for a cross but generally, he starts wide to provide width.

The fullbacks are actually quite conservative, especially when playing with 4 at the back. Because the wingers are providing width, Christopher Trimmel and, left back Christopher Lenz are tasked with staying deeper in possession is to provide a defensively solid platform for his team to play from.

The importance of this is accentuated by the often transitional nature of Union Berlin’s attack. While direct football is useful in getting the ball upfield quickly, there is also the risk that it comes straight back. So rather than committing the fullbacks forward, Urs Fischer instructs them to prioritise defensive responsibilities.

62.7% of the time, Union Berlin launch their goal kicks, good enough for 4th most in the league. The rest of the time, they play short, generally to either then play it up to Awoniyi, or down the flanks. They will have 2 of the centre backs split wide, with their goalkeeper as an additional actor. The full backs will provide the width and there will be either one or two pivots deep, behind the oppositions first line of pressure.

The remaining midfielders will be stationed higher, trying to pin back the opposition midfield to give those further back more space, and the forwards will be doing the same to the defence. When they play it short, the aim is to invite some pressure, thereby enabling the forwards, in particular Awoniyi, and create more favourable conditions for a direct ball. 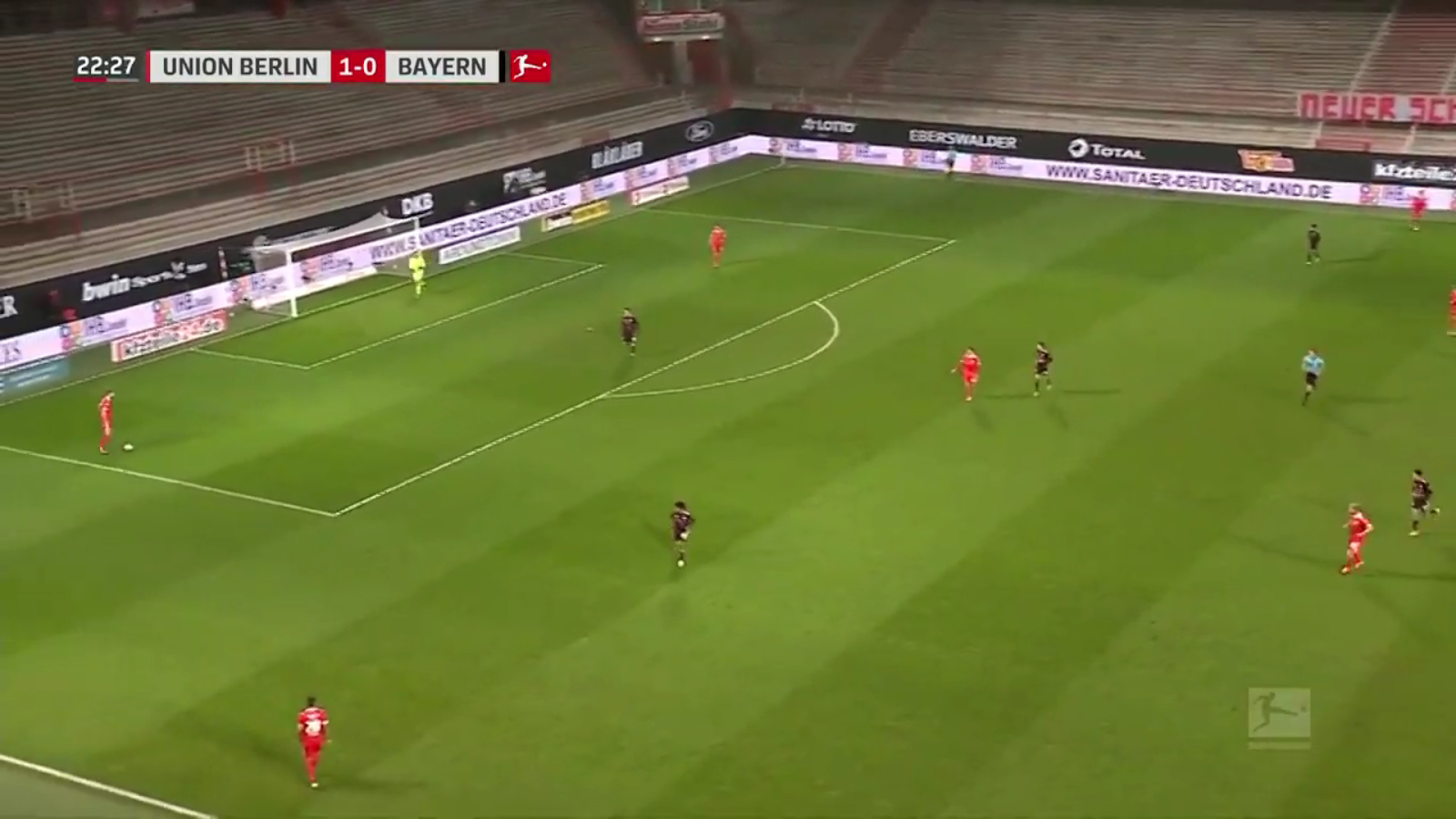 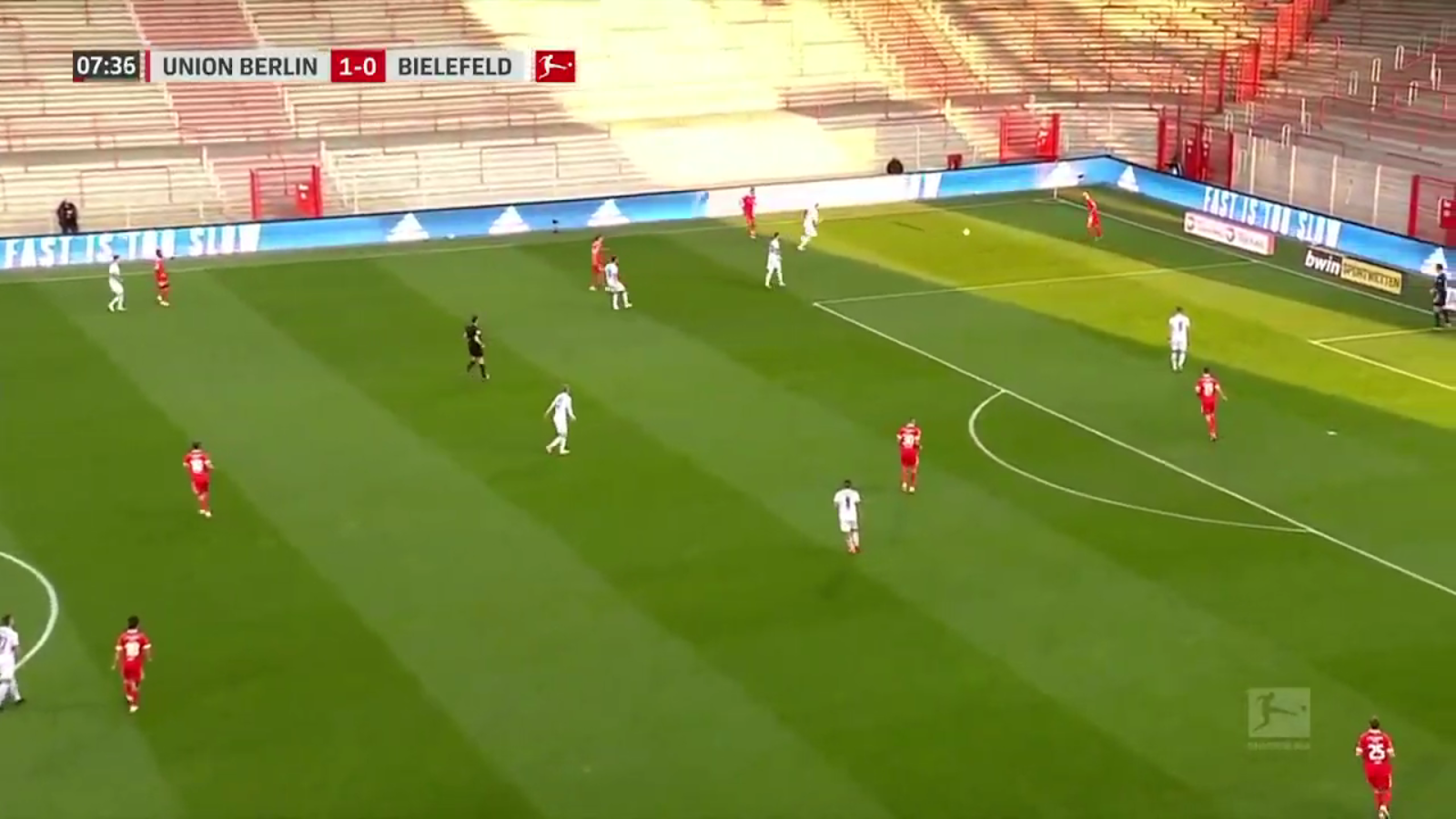 Figure 8: Short interplay means Max Kruse is free high up in the middle of the pitch

Another method for ball progression is wide combinations with midfielders, fullbacks and the wingers to enable attacks down the flanks. From Whoscored data, Union attack 42% of the time down the left flank, 34% down the right, and 24% down the middle. Playing across the pitch to switch the ball quickly are utilised too, in order to exploit free space on the opposite side.

As mentioned above, the style of play is quite transitional and there are several opportunities per game for Union Berlin to attack against few defenders. Awoniyi and Becker are very good on the counter as they are both quick, powerful runners who can shake off defenders and can exploit space in behind.

Typically, Awoniyi will stay central, just off the shoulder ready to run in behind or wait for the cross while Becker will stay wider and try to get the ball into the box. The other players will flood forward, to occupy the box or the space just in front of it to try and make the most of the opportunity.

Corners are the primary method, and Fischer has developed some schemes which have proved to be very useful in creating opportunities for the team. They manage to exploit the difficulties teams face when defending corners, tracking men while also keeping track of the ball, concentration, and the general chaos of having around 15 men in the box, to create these chances. 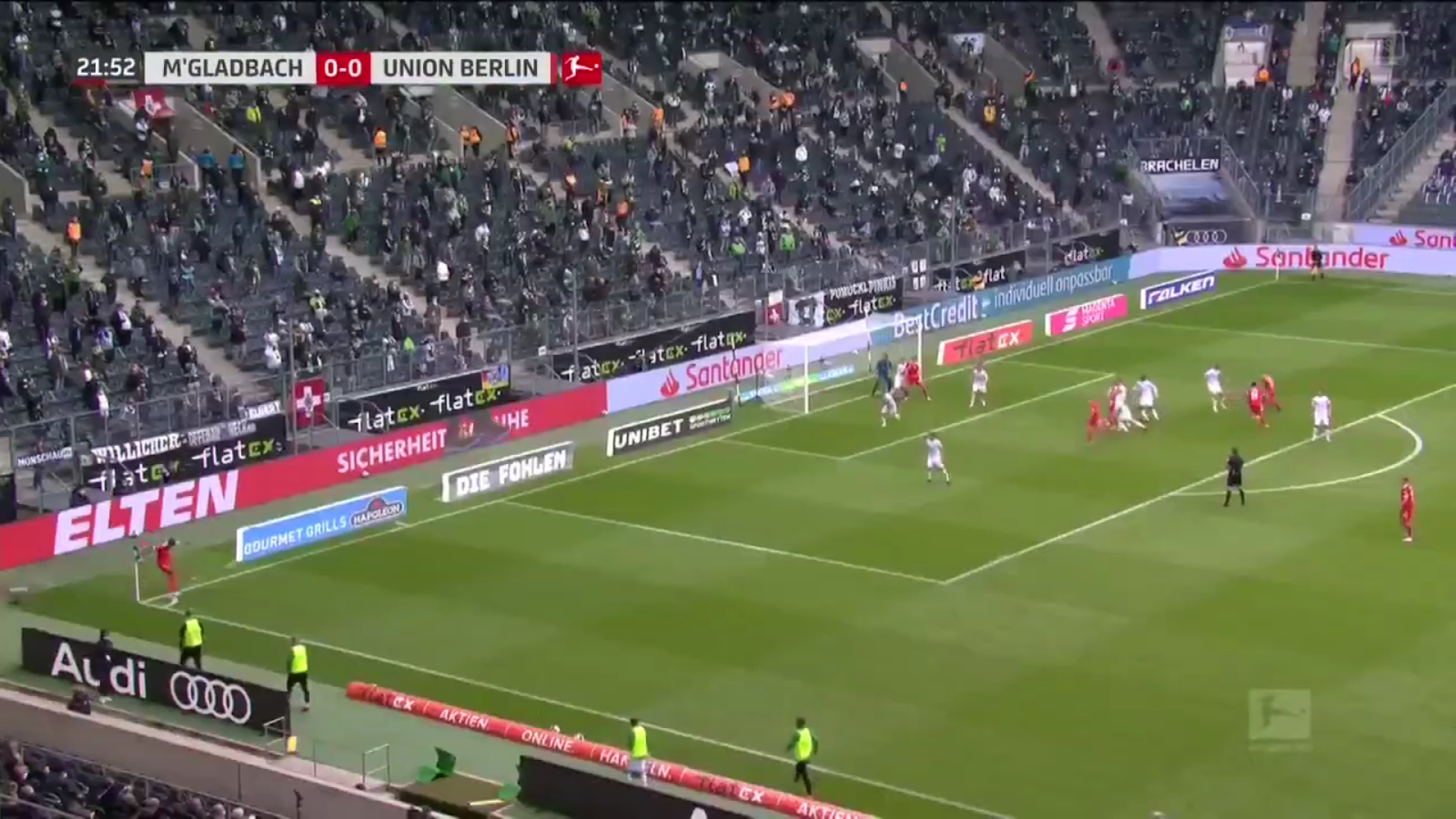 Figure 9: 2 “teams”, 1 team makes decoy run to the front, while the other run to the back. Of the 2 running to the back, 1 will aim to block both man-markers to create a free heading opportunity and the back post

A common move is what is known in Basketball as a “pick-and-roll”. This is when one player sets a screen for his teammate to prevent his man-marker from reaching him and enables him to receive the ball in space. Near post deliveries are also often utilised to drag players away from that area and generate space in the middle so a teammate can reach the flick on, see Awoniyi’s goal against Borussia Dortmund.

It is with these systems and tactics in place that has seen Union lose the 5th least games and lose only 3 of their 8 games vs the top 4, all away from home. In teams like Union Berlin, the whole team plays their part in getting them to where they will be next season, but it would not be outlandish to claim to performances of Awoniyi, Becker, Trimmel, Lenz and the talismanic Max Kruse have played a huge part. How they manage the demands of both Europe, and the Bundesliga remains to be seen, but Urs Fischer has done a magnificent job since his arrival and he should find a way.