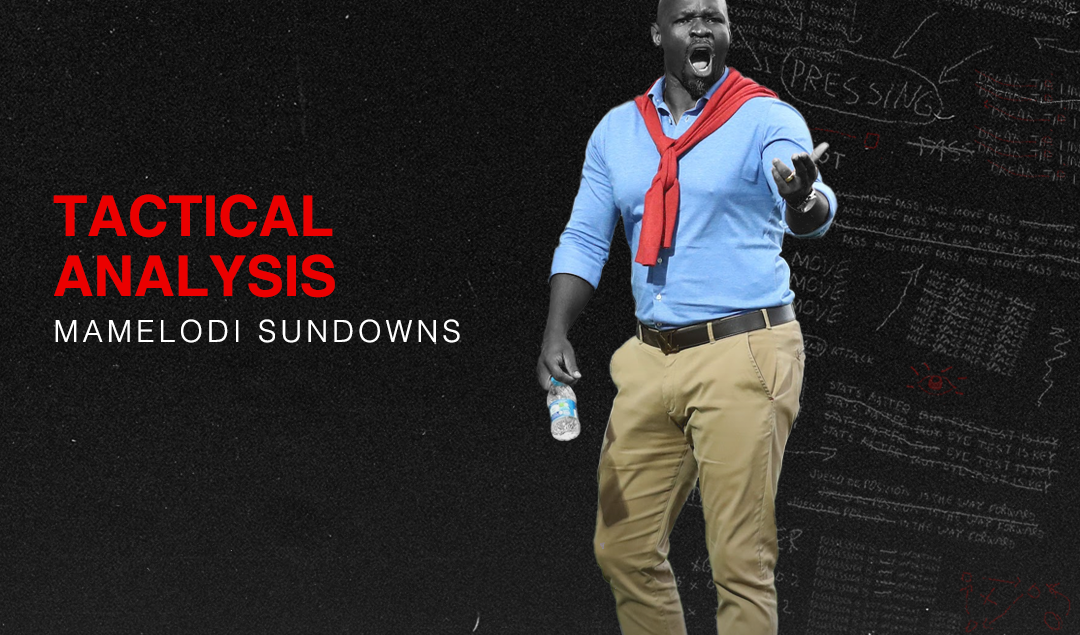 The departure of Pitso Mosimane from Mamelodi Sundowns dominated the build-up to the 2020/21 DSTV Premiership, as the reigning champions had to prepare for life without the stewardship of arguably the greatest manager in the club’s history.

Forward came co-head coaches Manqoba Mnqithi, Rulani Mokwena and senior coach Steve Komphela; the trio took over in an attempt to perpetuate the team’s dominance of South Africa’s top-flight football. From the start, the coaches rapidly uncovered their go-to formation (4-3-3) at the club, and to date, the results have been fruitful, winning the league at their first attempt. The 4-3-3 presents a different configuration in build-up and attack.

The below illustration shows a staggered 2-1-4-3 or 2-5-3, not much of a surprise with more teams that play a possession-conservative style of football in this configuration. It offers multiple passing lines vertically, diagonally and horizontally. 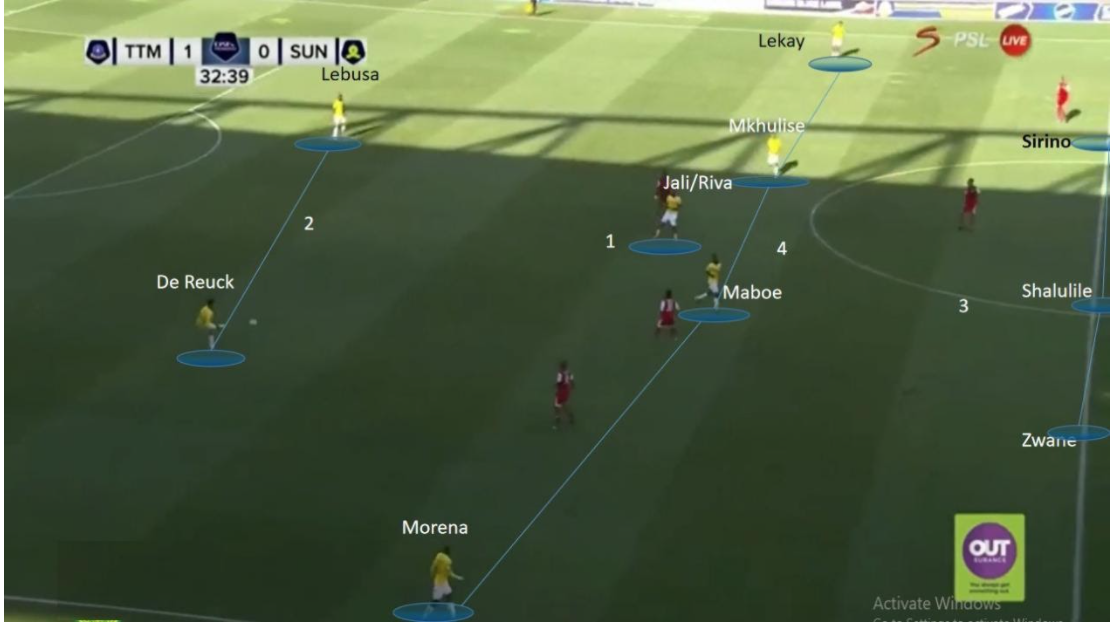 Build-up in the Defensive Third

“Positional Play consists of generating superiority out of the defensive line, against those who are trying to press us. Everything is much easier when the first progression of the ball is clean.” – Juan Manuel Lillo.

Typically teams look to sit back or shape up in a mid-block against Sundowns in an attempt to frustrate them. However, a few pressed them high up in a ploy to disrupt their build-up play. There’s a common misconception that Sundowns play three at the back, because of the CDM dropping between the two centre backs in certain phases of attack. 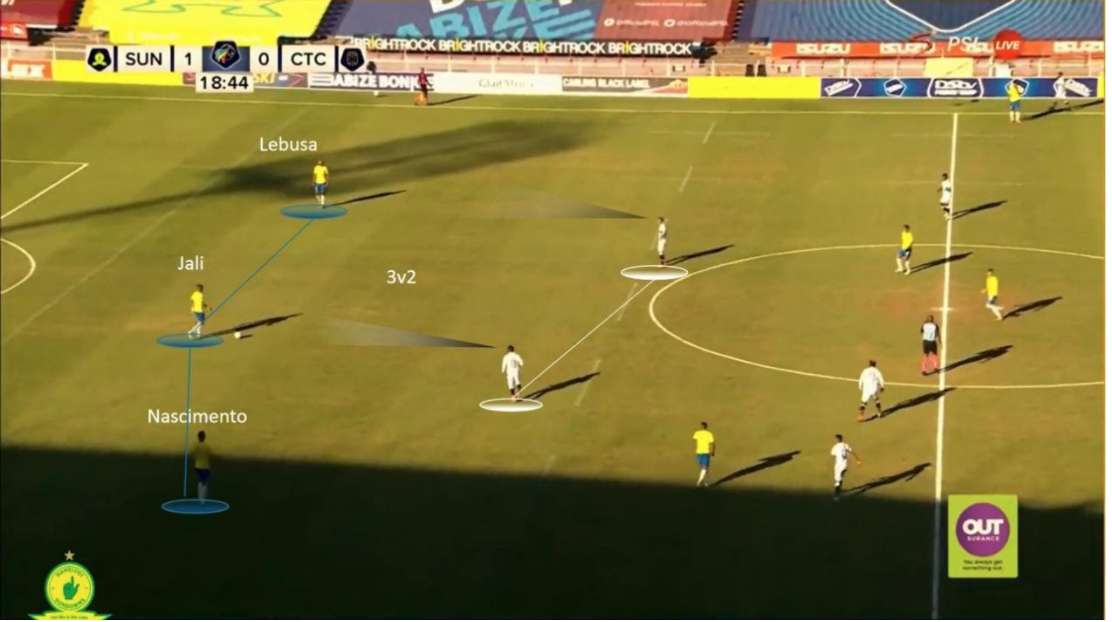 Realizing that there are two Cape Town City players pressing the two centre-backs (Ricardo Nascimento and Musa Lebusa), Andile Jali drops between his two teammates and gets on the ball. This allows for Mamelodi Sundowns to have an extra man in the 1st line. The free man in most cases is assigned with progressing the ball. “Pass the next lines of play.” – Juan Manuel Lillo.

Nascimento (freeman) receives the ball from Jali to break the press from Cape Town City’s Fagrie Lakay and Abdul Jeleel Ajagun, before playing vertical pass to Lebo Maboe behind the pressing line. Maboe receives on the half-turn before playing a diagonal pass to Gaston Sirino on the far left side. 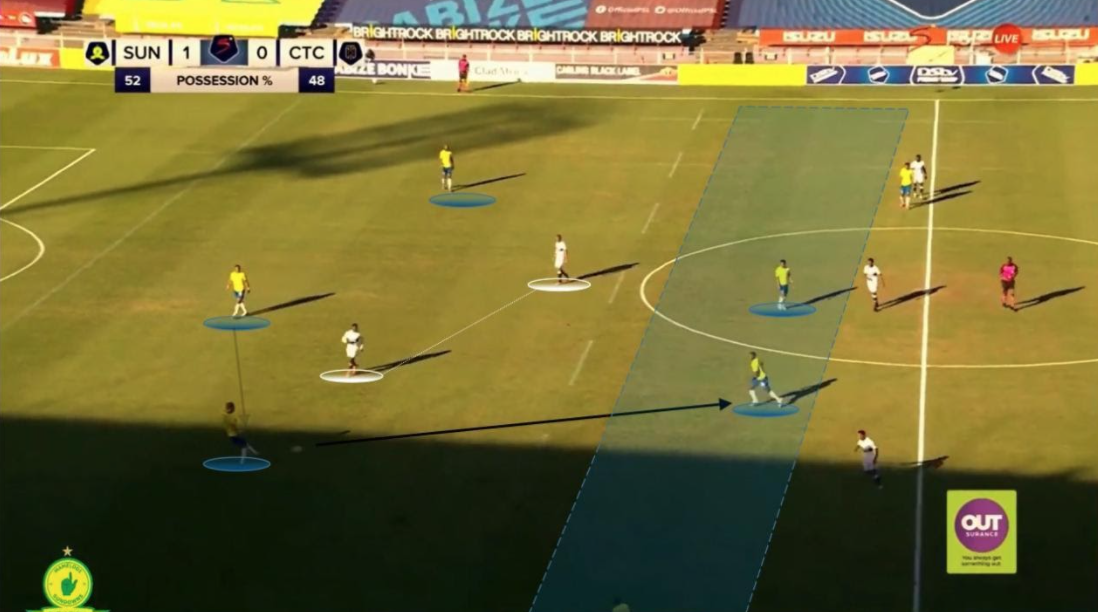 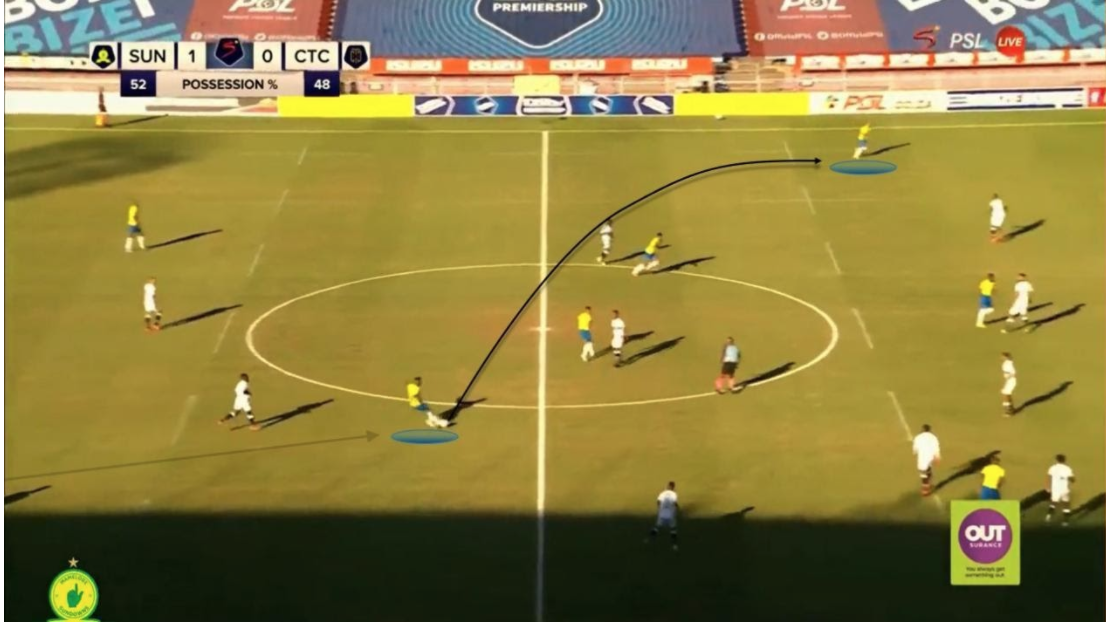 When presented with situations where opposition looks to press with one player in the first line, the CDM returns to his natural position, become a passing option in the midfield line. Such a situation creates a 2v1, with the freeman looking to progress the ball – through vertical passing and/or progressive ball carrying.

Lakay’s press is broken as the ball is moved to Nascimento (freeman), who freely carries the ball up the pitch before playing a forward pass into Themba Zwane in between the lines. 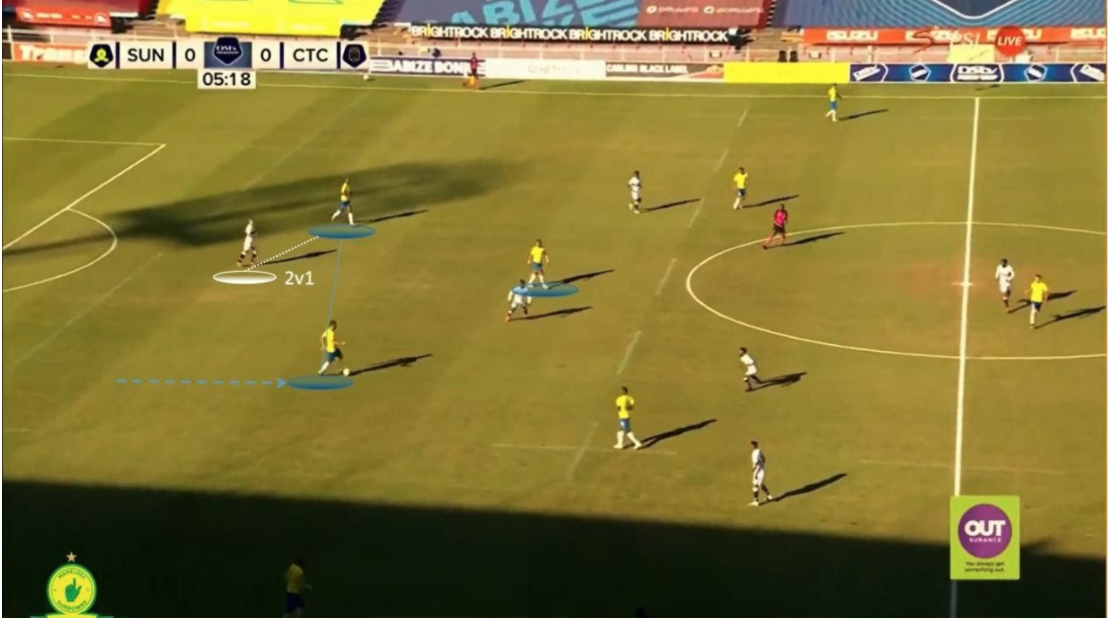 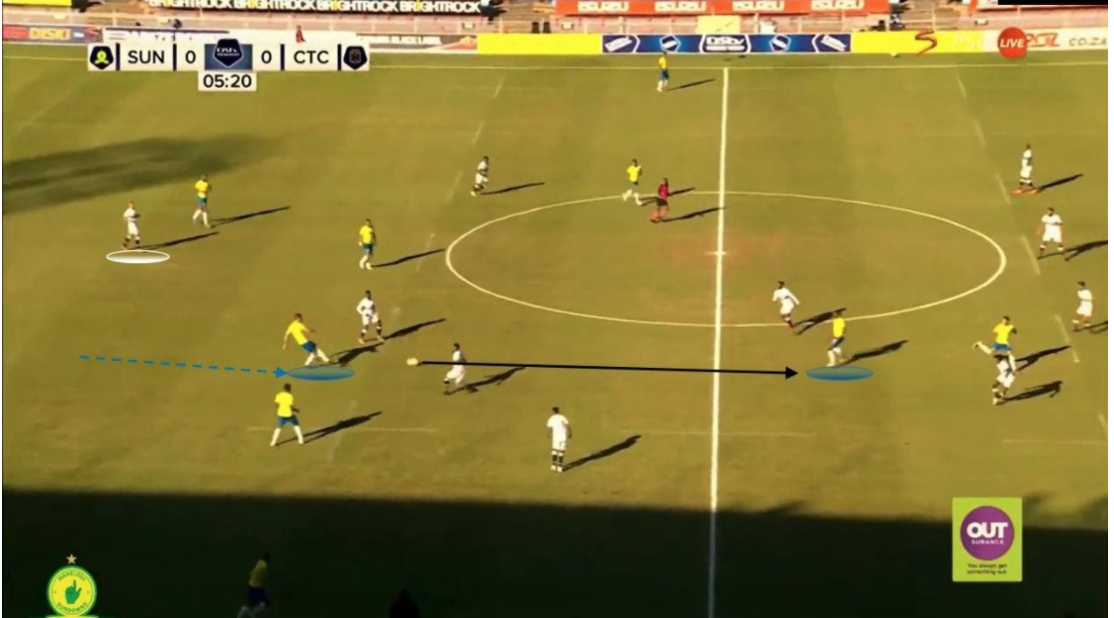 “Move the opponent. Invite the opponent to press. You have the ball on one side, to finish on the other” – Pep Guardiola.

One of the most intriguing elements with Sundowns’ build-up lies in the interchanging of positions as the ball is recycled or circulated; the ball is usually circulated when a team is unable to progress the it on one side of the pitch, using the centre-backs, the ball is then moved to the opposite side.

These movements are hard to track during circulation since they happen away from the ball. By the time the ball reaches the other side, the opposition is presented with a different defensive situation.

As Sundowns is unable to move up the pitch on the left hand side, they start to look for other avenues. Lebo Maboe starts pulling away from his position (RCM) to the right-back position where Thapelo Morena (out of the picture), begins to move higher up the pitch and into the right-wing position. This sort of movements are meant to disorientate the opposition’s defence to open up spaces. 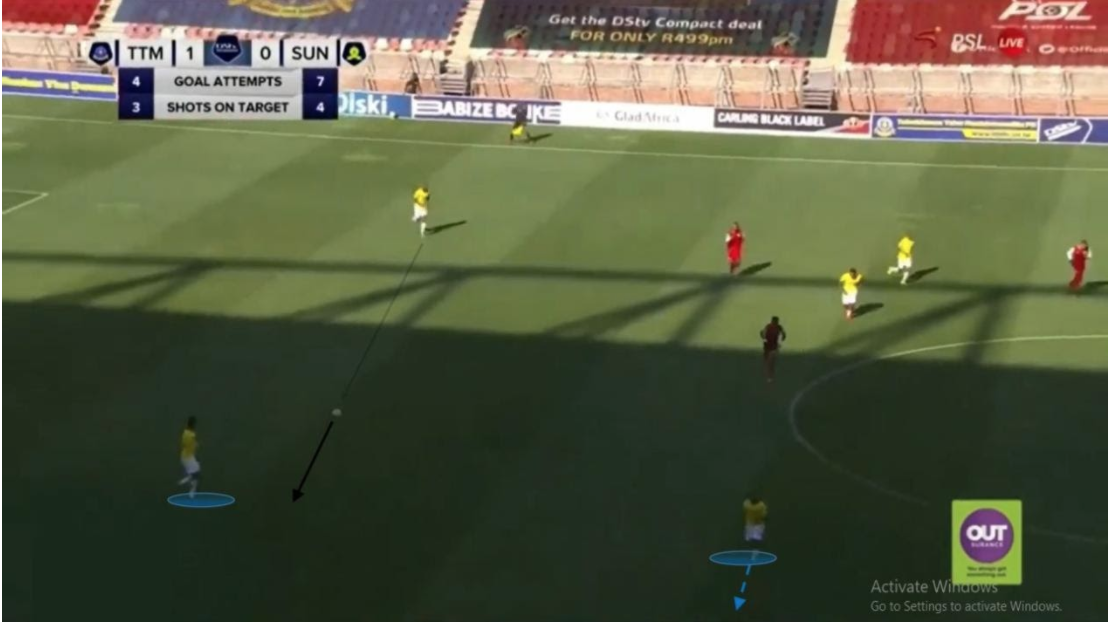 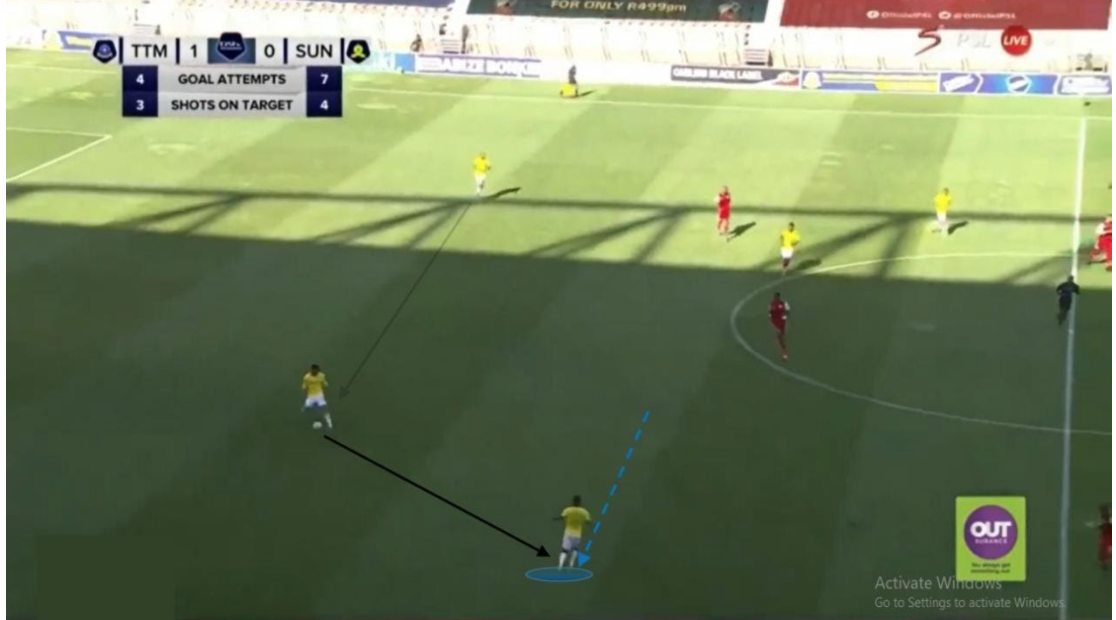 The Brazilians usually play with natural wingers that look to hug the touchline to provide width in the build-up. Instead, most of their width is provided by their two overlapping full-backs, since the two players flanking the striker in their forward three are tucked-in (occupying the half-spaces), to maintain a central presence, so to allow close combination passes centrally in the final third. “There’s numerical, positional, and qualitative superiority. Not all 1v1s are a situation of equality” – Paco Seirul-Lo.

However, there are matches where teams look to close off passes into the central spaces, where Sundowns’ most creative players are. This forces them to move out wide to look to receive the ball to feet. As the ball is being circulated from right to left, Lyle Lakay sees an opportunity to provide Gaston Sirino to be 1v1 against the opposition’s right-back Nicholus Lukhubeni in a wide area. He starts running inside, committing the right winger (Brandon Theron), while Sirino starts peeling out wide to receive and face the right-back 1v1. 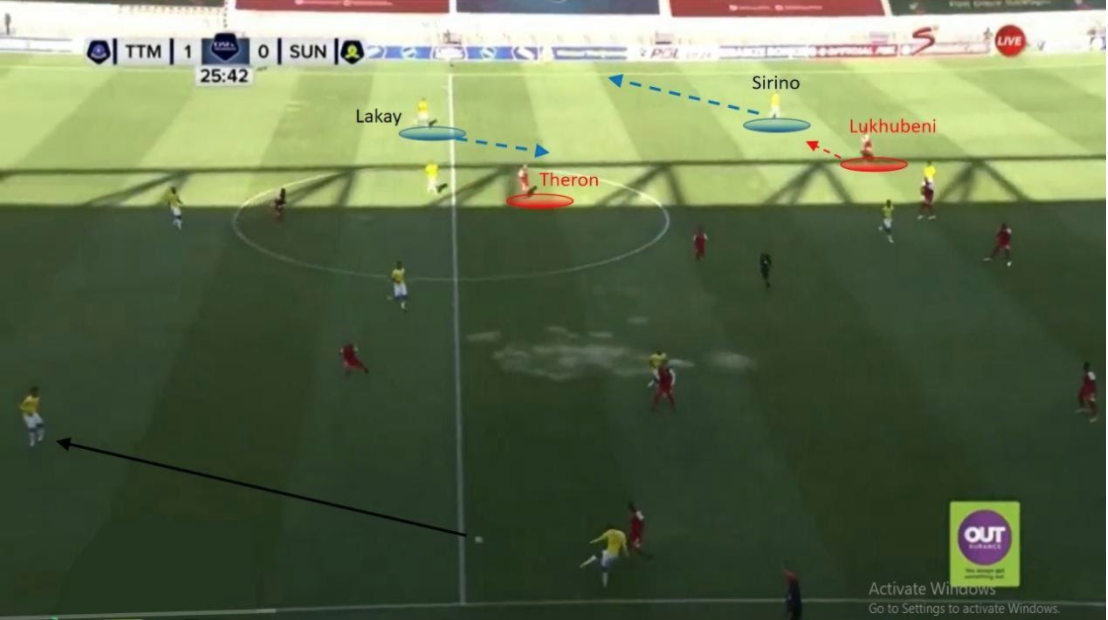 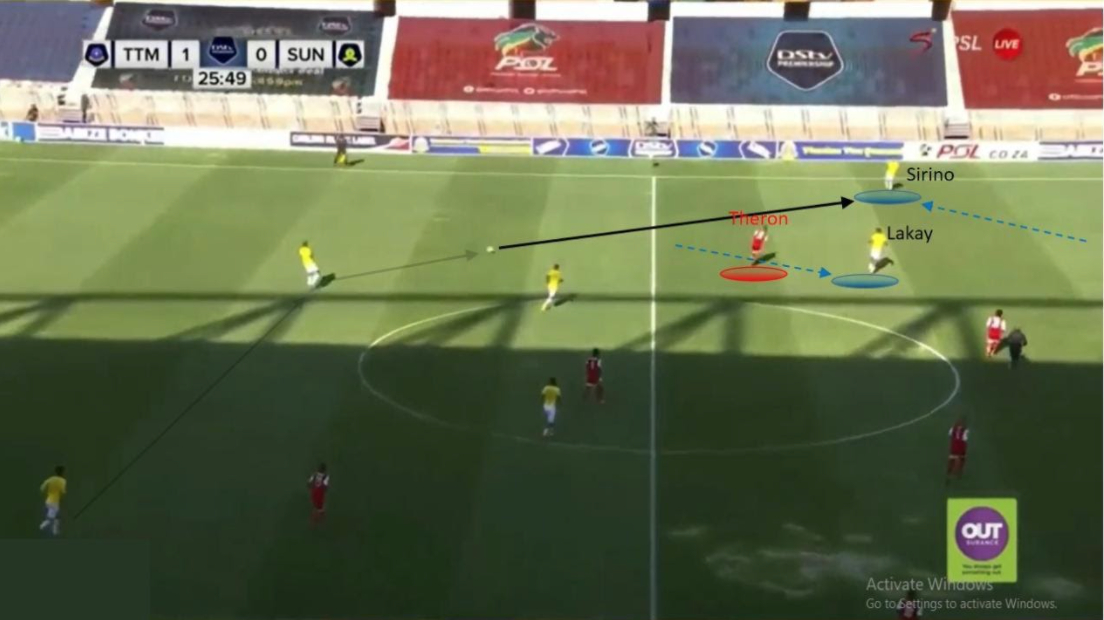 In this sequence, unfortunately, the ball was moves slowly to Sirino, which gave  Theron enough time to recover and prevent Sirino from facing Lukhubeni. In the illustration below, Morena receive the ball under pressure, Maboe realizes the situation and peels out wide – also moving out of the cover shadow – to provide a passing option. After making the pass to Maboe, Morena makes an ‘inverted’ run inside to take up Maboe’s vacated position. 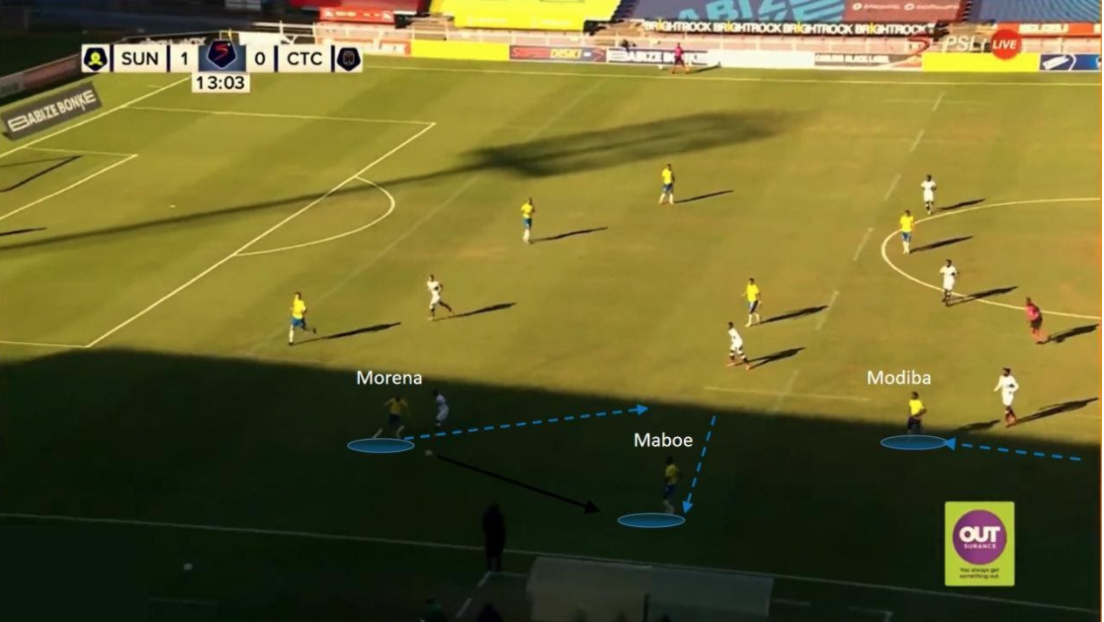 Exploiting the Space Behind the Fullback

“The objective is to move the opponent, not the ball” – Pep Guardiola. Positional Play has lots of principle, but the fundamental principle is to move the ball in search of superiority. As soon as that superiority is achieved, it is used to dominate the game.

As Morena passes the ball out wide to Sirino – who is hugging the touchline – he makes a run infield, dragging Thabo Rakhale with him. This situation forces Farai Madhanaga to move out of position, in order to apply pressure on Sirino out wide. This presented Maboe with an opportunity to exploit the space behind Madhanaga. 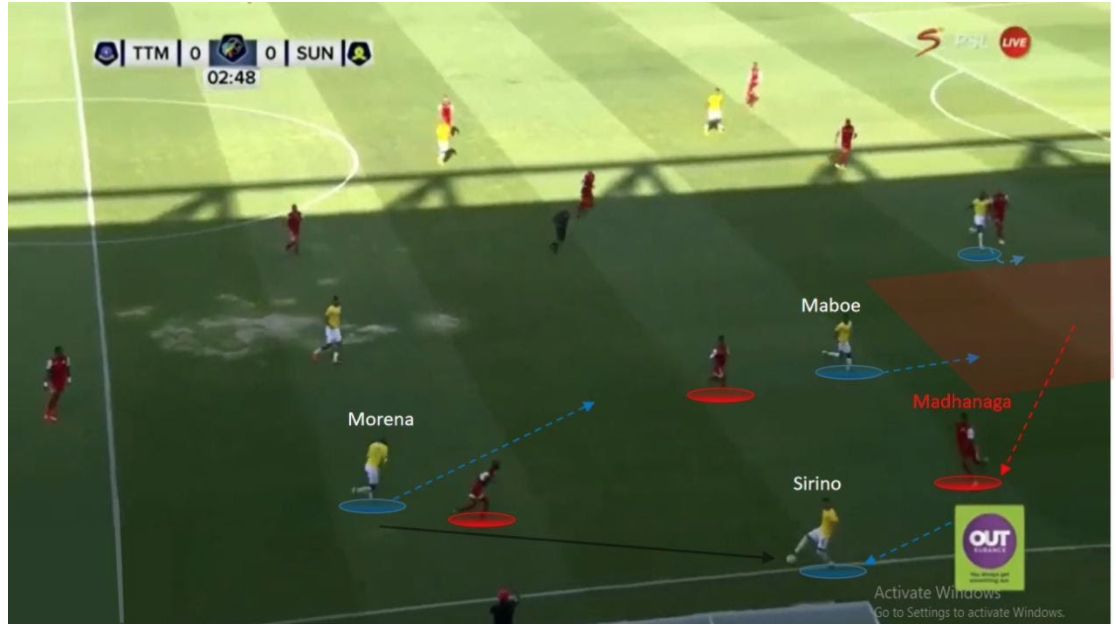 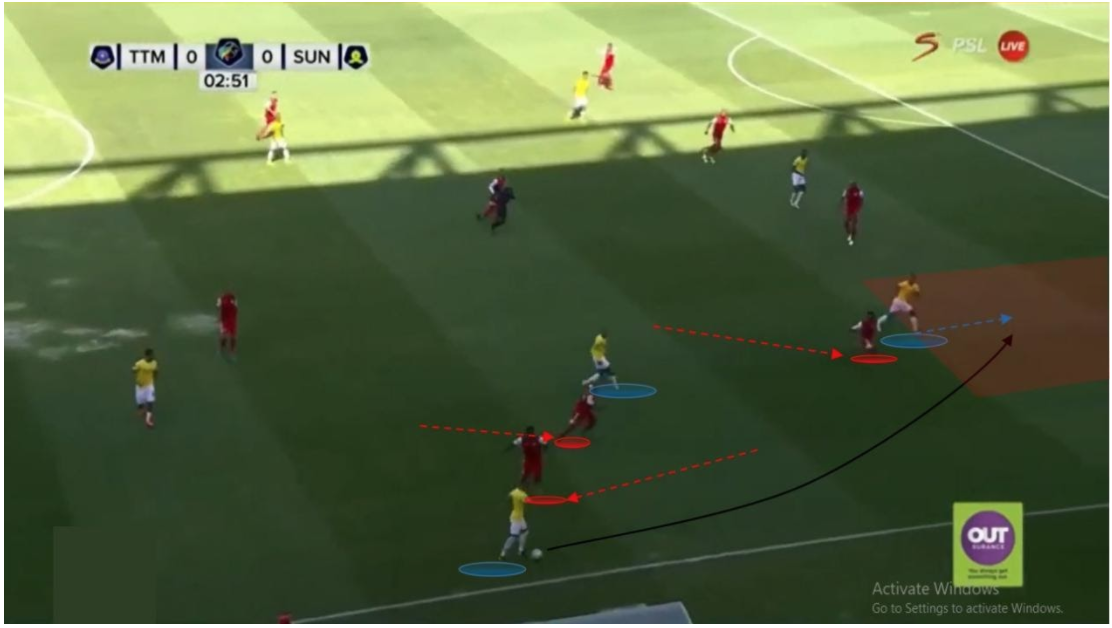 In this sequence, however, Sirino did not get the pass that would have given Maboe an opportunity to run in behind the back line and create an opportunity from the assist zone. Again, Sirino receives out wide, pulling the Cape Town City right-back Thamsanqa Mkhize out of position, while the alert Sphelele Mkhulise sees an opportunity to exploit the space behind fullback. 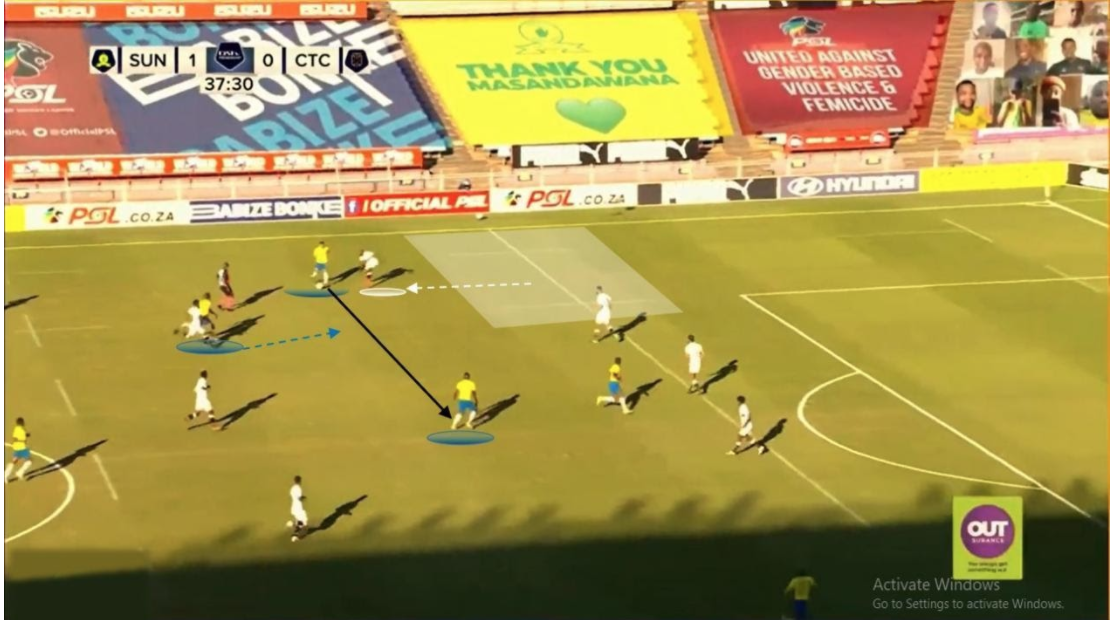 As we can see below, this move is intricately carried-out using a third-man pass, as Aubrey Modiba receives a pass from Sirino, who is cuts on to his strong foot. Modiba simply just plays one-touch pass to Mkhulise making a run into the vacated space. Unfortunately, the move ran up a cul de sac, as Mkhulise failed to control the pass on the move. Thus, he ended up being forced wide. 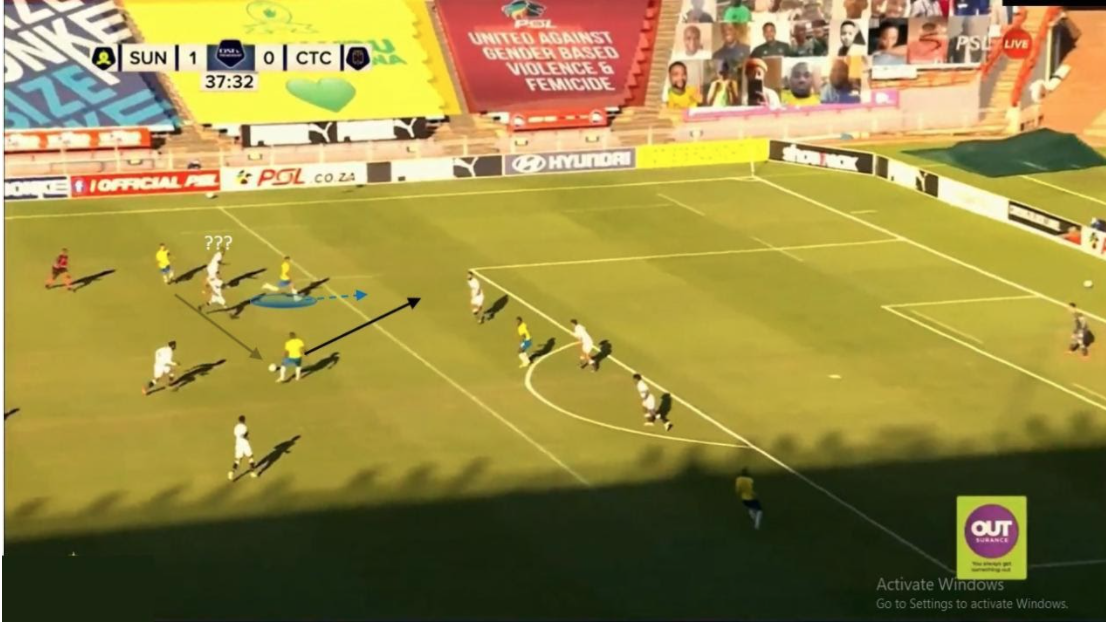 “Weak points or holes (pockets) in the opponent’s position must be occupied by pieces, not pawns” – Siegbert Tarrasch. If you need a job done in central high pressured areas; call on Themba Zwane. He has this distinct ability to receive passes in high-pressure zones, thus attracting pressure, before playing the ball to a wide open man. 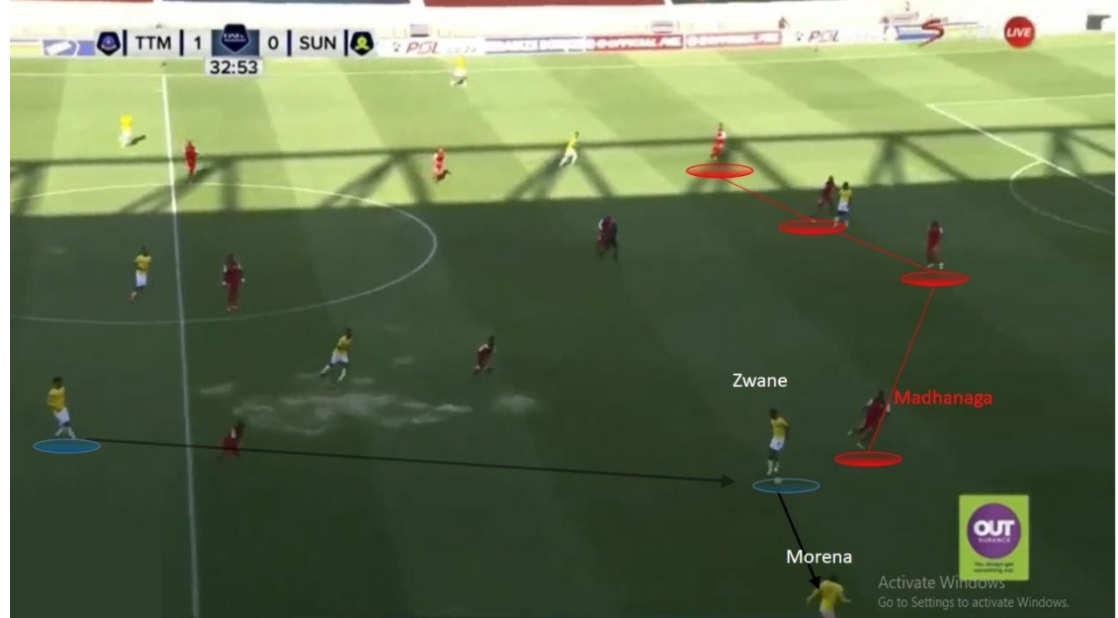 As Rushine De Reuck fires a vertical ball into the feet of Zwane, he effortlessly cushions it into the path of Thapelo Morena making an overlapping run down the right wide channel. Doing so, he attracts pressure from Madhanaga, before spinning and looking to exploit the vacated space behind the TTM left-back. 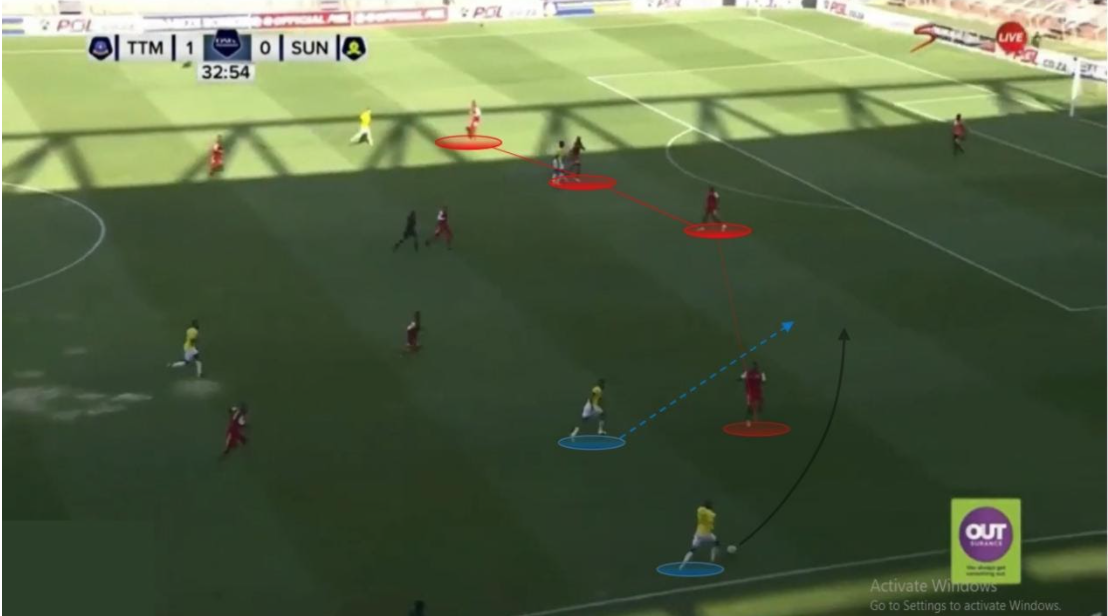 Third-man pass in Between the Lines

“Look for the third-man to be able to turn and face the play.” – Juan Manuel Lillo.

When looking to escape pressure, it advised for a team to play a long flat vertical pass to the furthest man in the ball carriers line of sight. Long passes generate pressure at its destination, as it gives the defence more time to read the direction and have more time to arrive at its destination. Once the long pass arrives to its destination and the pressure gathers, which usually leaves other players open in other areas; the pass is laid off to 3rd man who has a better view of the direction of the attack.

As Morena plays a long flat pass to Modiba in between the lines, four Cape Town City players have enough time to read the destination of the ball and start surrounding him in a pack of  four, before he lays a ball off to Sirino who is facing the play. Sirino’s line of sight allows him to see Shalulile making a run off the shoulder of Taariq Fielies – who is alone at centre back, as Abbubaker Mobara is sucked into the pressure of the pass to Modiba. 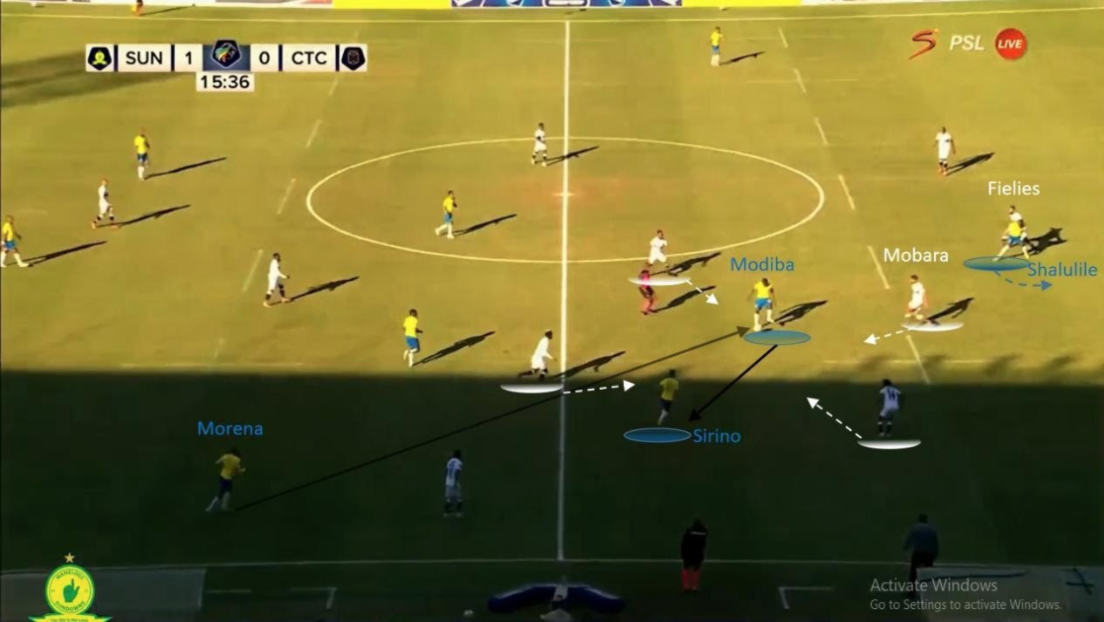 Shalulile exploits the spaces vacated by Mobara, to receive a through pass from Sirino, that put him through on goal. Unfortunately, he dragged his shot just wide of the upright. 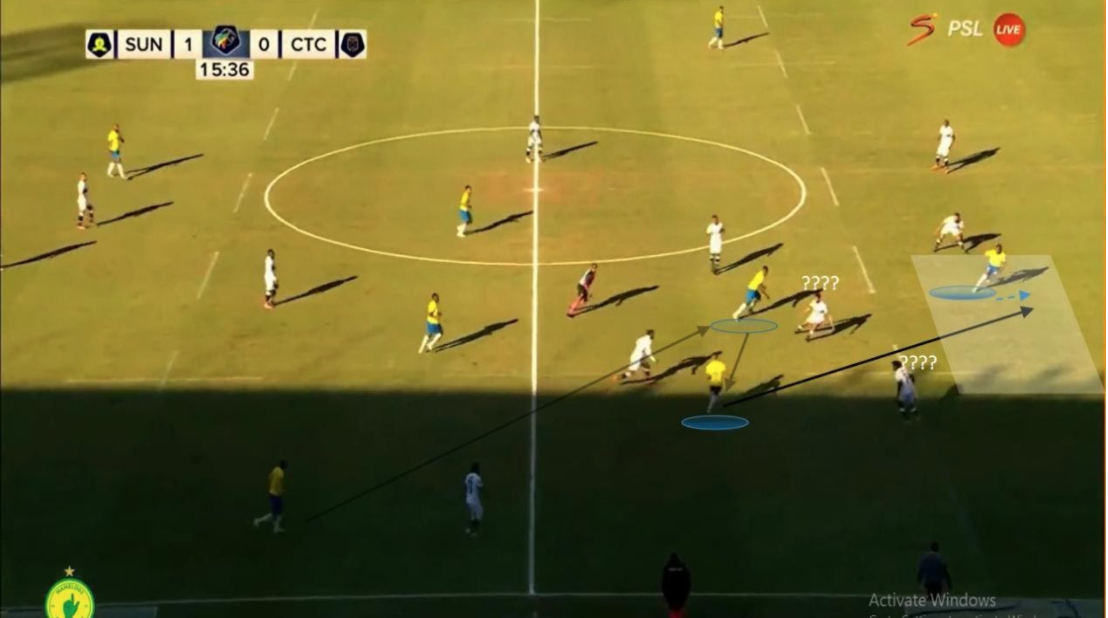 Like mentioned before, Sundowns’ width largely provided by the two fullbacks – although they invert times. With that being the case, most of their crosses come from the fullbacks. Last season, we would see the two fullbacks switching sides, these actions have technical and tactical reasons.

These actions impact how the fullback switches the ball from one side to another and how a cross comes in the box. It should be mentioned that these types of changes have a lot to do Lyle Lakay, more than any other player. 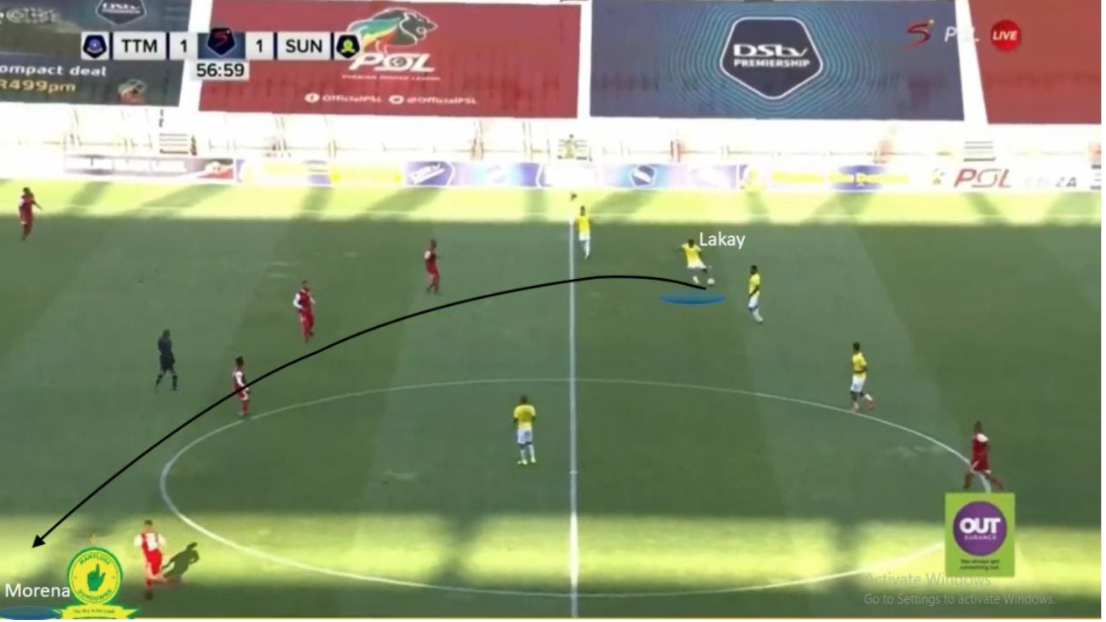 Technically, a right-footed player switching the ball from right to left is impossible. However it will be a different type of pass, especially if the ball carrier is facing up the pitch – the switch would most likely need the receiving play to be on the run. Whereas, a left footed player on the right, like Lakay in the illustration above, just needs to cut onto his favourite foot, and play to the feet of the receiver or into space.

Tactically – against teams who shift well and are well organised, these types of switches are too quick – since they need to go through the CBs or CMs -, that they cause the opponent to move from one side to another, thus disorganising themselves. 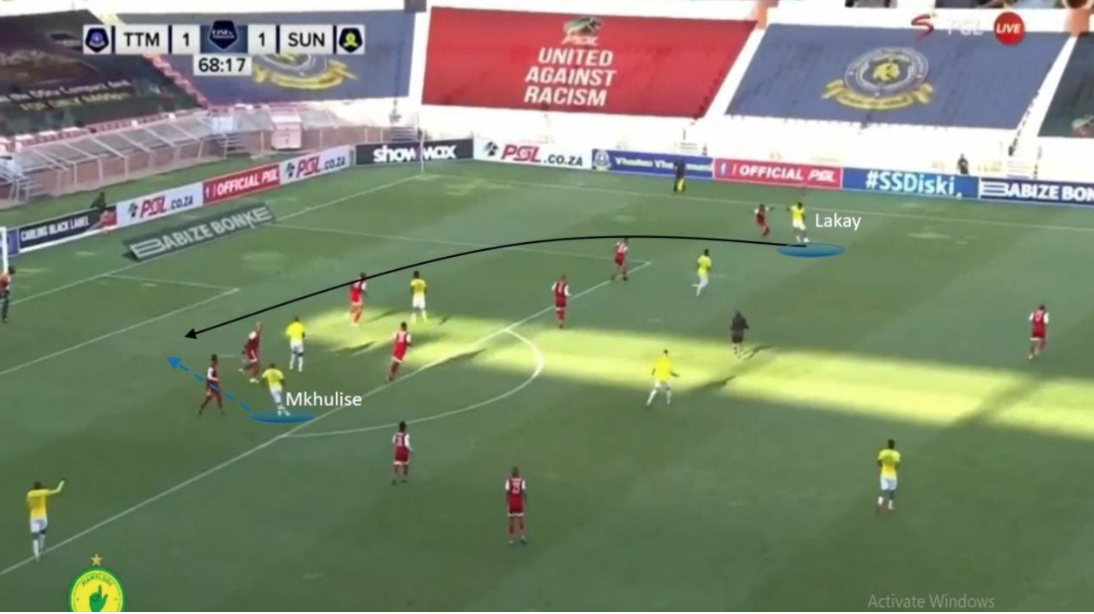 Technically and tactically (in a nutshell) – on one hand, a left-footed player crosses from the left and visa-versa. And at the end of the cross, the player receiving the cross ( out-swing ) has to run on to the cross ( generating power) to finish – coming in late. One the other hand, having a left-footed player crossing from the right (in-swinger ), the ball requires the receiving player to make an early run to beat the defending line, before flicking the ball to goal.