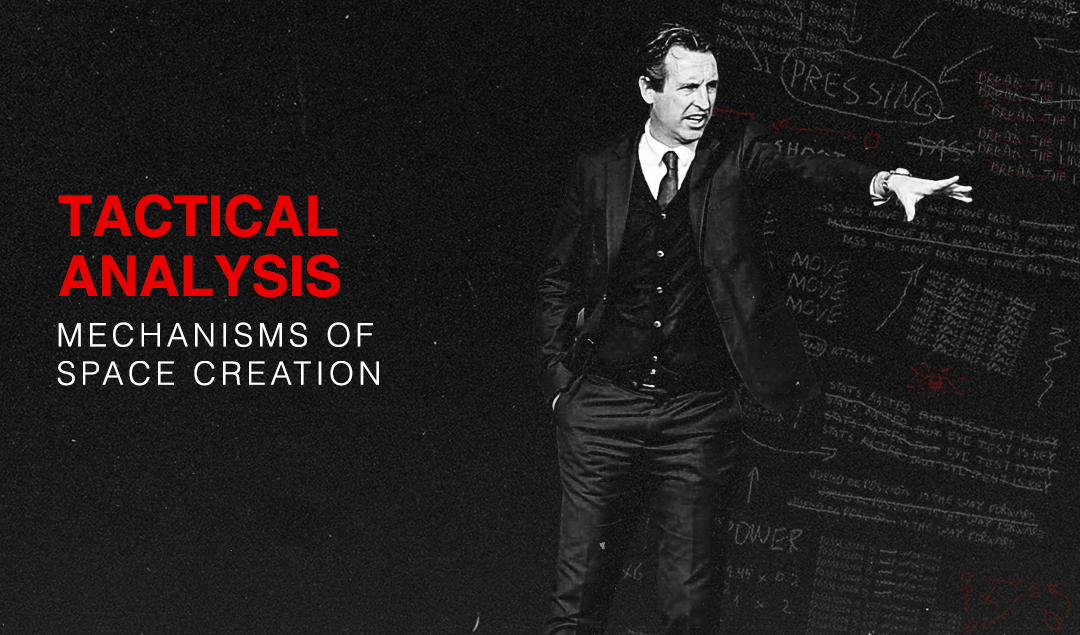 Space creation is one of the most fundamental and important concepts in football. As Xavi puts it, “I understand football as a time-space concept”. Whether you need to play out of the opponent’s high press, break down a low block or press yourself, you need to establish control over the influential spaces (these “influential spaces” differ in each circumstance) in order to succeed at these events.

My primary focus in this article will be pertaining to space creation against a man-oriented high press. With the opposition pressing high and limiting time and space on the ball at the base itself, it becomes even more important to create space for yourself in order to buy time on the ball to further create and exploit space that the opposition has left or to directly exploit the spaces left by the opposition. Villarreal-Levante will be my model game to explain this concept since Villarreal showcased some really interesting ideas in possession and were successful in outsmarting Levante’s high press.

The structure of the piece will be as follows:

Before we go into the detail of Villarreal’s plan in possession, we need to take a look at their shape in possession which was carried out throughout the game. Their structure was as follows: 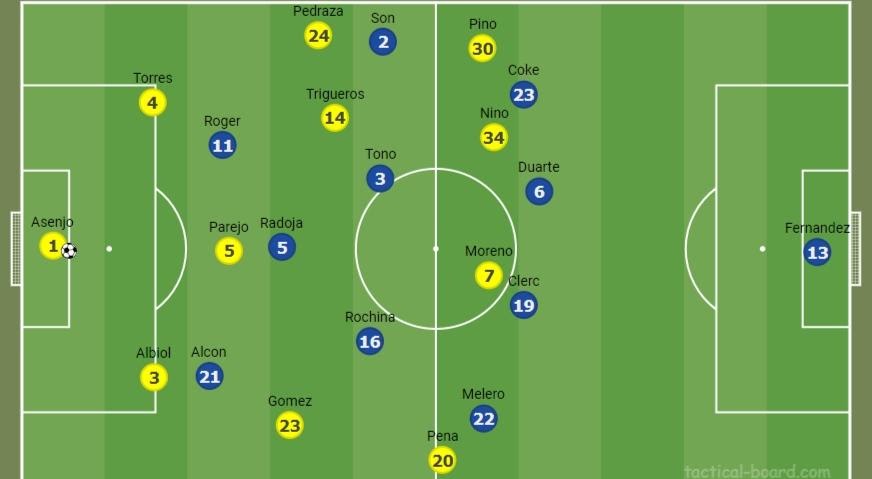 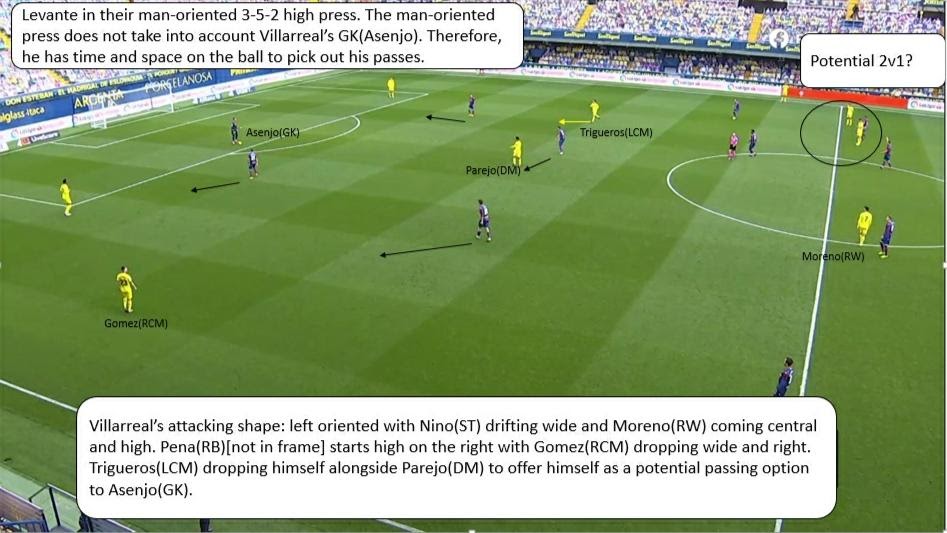 The most common pattern used by Villarreal to create space and disrupt Levante’s man-oriented high press was press-baiting on goal-kicks: deliberately attracting Levante’s first two lines into pressing ( two strikers + three central midfielders + two wingbacks) to create space in between the lines or in behind and exploiting it through smart movements. The approach was effective as Sergio Asenjo (GK) always had ample amount of time and space on the ball against Levante’s man-oriented press which matched Villarreal man for man except the goal-keeper.

The following image perfectly illustrates the point mentioned above. With Levante’s own goalkeeper unable to participate in the press, Villarreal always had a 11v10 meaning a +1 in the form of Asenjo (GK) against Levante’s man-oriented press: 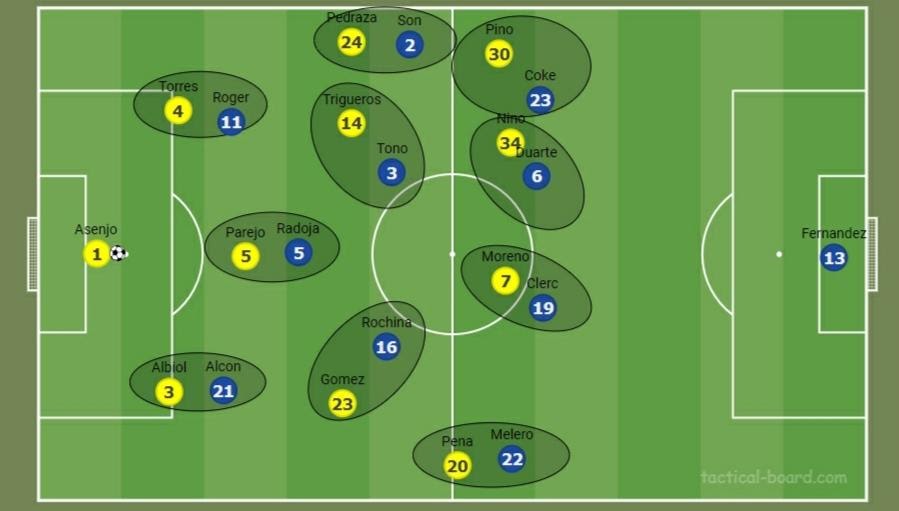 If one of Levante’s strikers decided to press Asenjo (GK) while keeping the nearside centre-back in their cover-shadow so as to control two players with one and deny Asenjo (GK) the time and space on the ball, it still left the central lane open i.e. Parejo (DM) for Asenjo (GK) to pass into since the Levante striker was pressing from a wide angle.

Parejo then acted as the link-player to find the free centre-back, who was free as a result of the Levante striker leaving him to press Asenjo. The link pass is one of the most common themes used by teams to find the player who is in cover-shadow by the opposite pressing player: 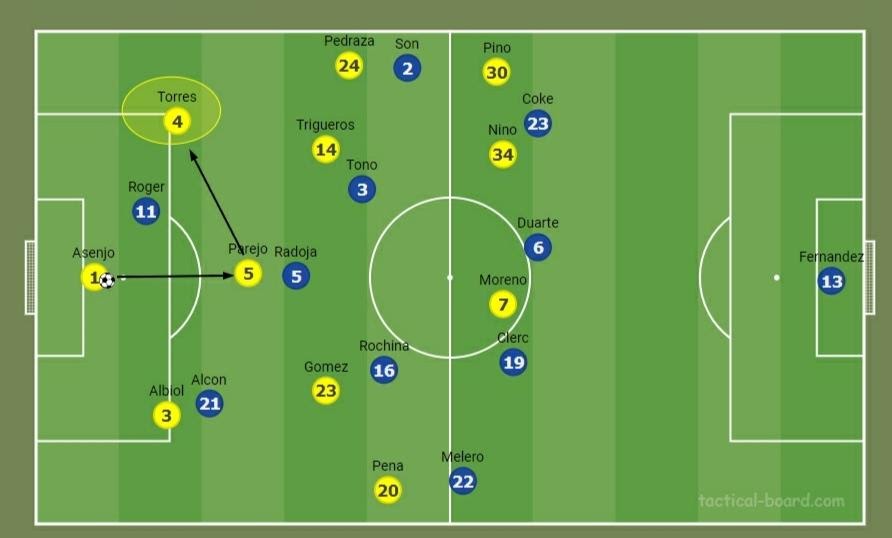 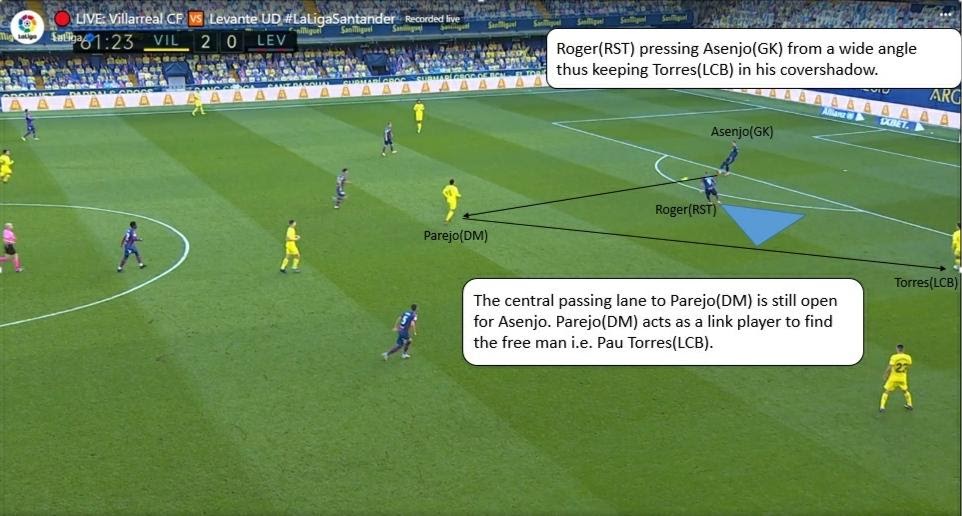 Although making a central pass into a central player receiving back to goal with pressure in behind is always risky but having a player who has the technical security and space awareness like Parejo makes it relatively a safe bet on most occasions. Barring this one occasion, Levante strikers did not press Asenjo and instead stayed on their respective centre-backs.

In this scenario, with all of Asenjo’s passing options covered, Asenjo had to go long. Although the success of this event largely depends upon the forward winning his 1v1 duel in the air, teams with smart positioning can exploit the situation by placing themselves optimally to win the second ball.

With Pedraza (LB) deep thus attracting Son (RWB) and with Niño (ST) drifting wide to compete in the air with Coke (RCB), this left Pino (LW), who positioned himself in the large space between Son (RWB) and Coke (RCB) to potentially receive a knockdown from Niño (ST).

This is well highlighted in this whole sequence. The sequence starts with Asenjo (GK) having time and space. 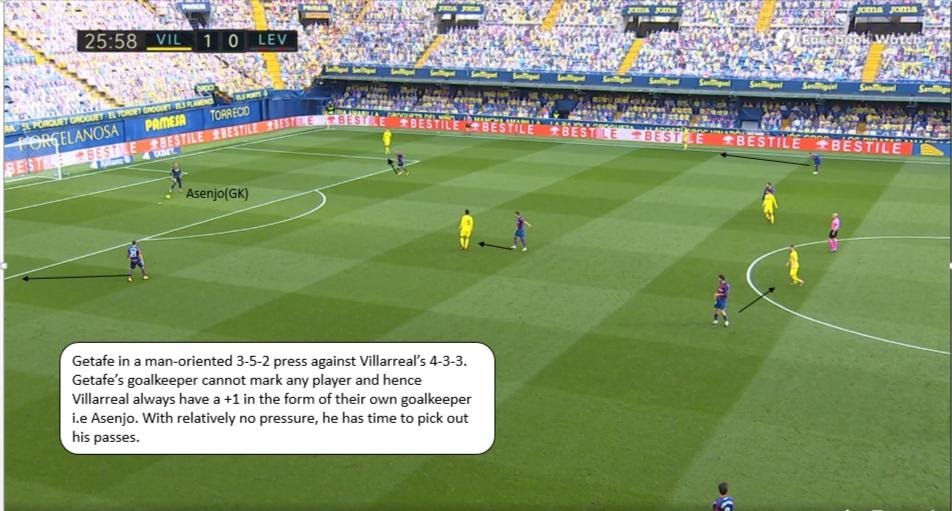 Asenjo then goes long to Niño (ST) who competes in the duel with Coke (RCB) while Pino (LW) positions himself in the vacant space. This pulls out Óscar Duarte (CCB), who moves to wide right to support Coke (RCB) and to prevent the overload that Villarreal were trying to create. 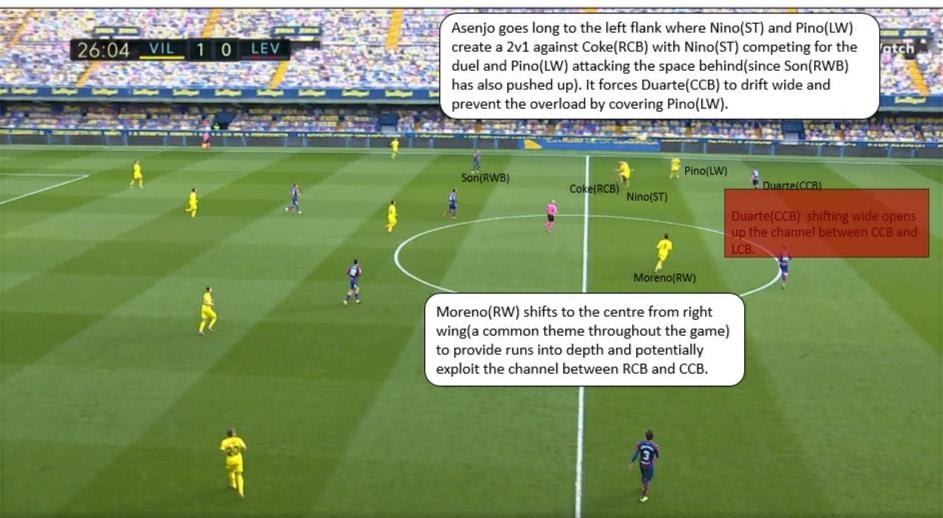 Niño (ST) wins his duel and Pino (LW) receives the flick on in behind and pulls out Duarte (CCB) further wide in a 1v1 which opens up a large space centrally for either Moreno (RW), who is positioned inside and high or Niño (ST) to dart into. 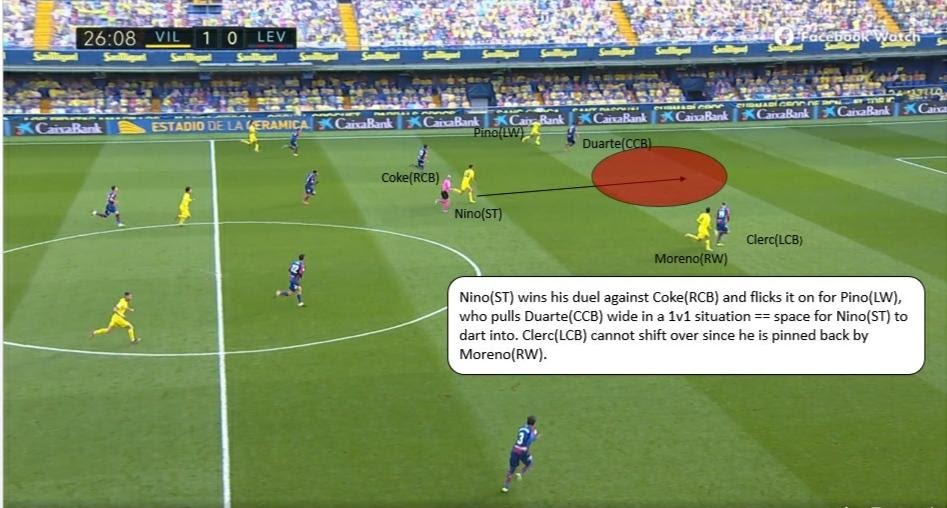 This led to a very dangerous opportunity. This strategy was used over and over again by Villarreal throughout the game with a high succession rate as well. Another opportunity was carved out in the second half with Duarte (CCB) drifting out wide to prevent the overload and compete with Moreno (ST) [who took the striker position after the substitution of Niño at half-time]. 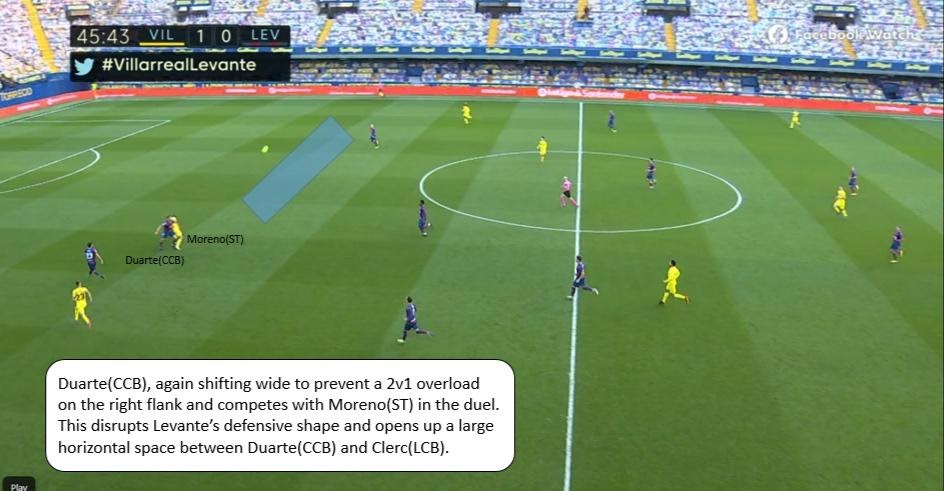 Duarte (CCB) wins the duel this time, but the second ball falls straight to the onrushing Trigueros (RCM) in midfield who has time and space to pick out Moi Gómez (LW) due to Levante’s poor defensive shape. 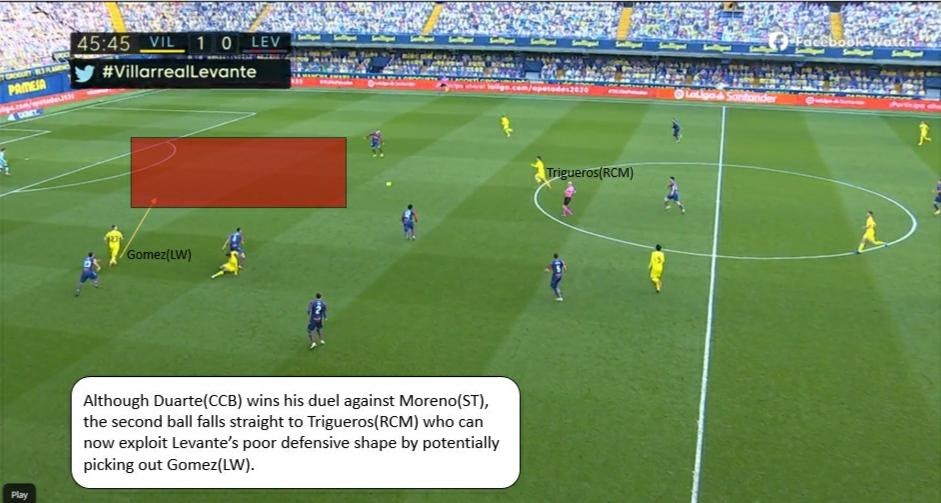 Before ending this section, here is a short video taking a detailed look at another action performed on goal-kick summing up their smart tactical play:

Playing chess on the football pitch 🧠

Stretching Levante Vertically To Create Space Between the Lines

Another interesting concept used by Villarreal to create space: specifically between the lines was stretching Levante vertically. This was often achieved by the counter-movements made by the midfielders and the forwards. The midfield line, usually Parejo (DM) and Trigueros (LCM) dropped deep often forming a double pivot attracting the opposition midfield line (due to Levante’s man-oriented nature of the press they had to follow), while the forward line, usually Niño (ST), Pino (LW) and Moreno (RW) pinned/stretched the defensive line so as to prevent any of the Levante’s defenders from stepping out to maintain vertical compactness thus opening up space between the lines: 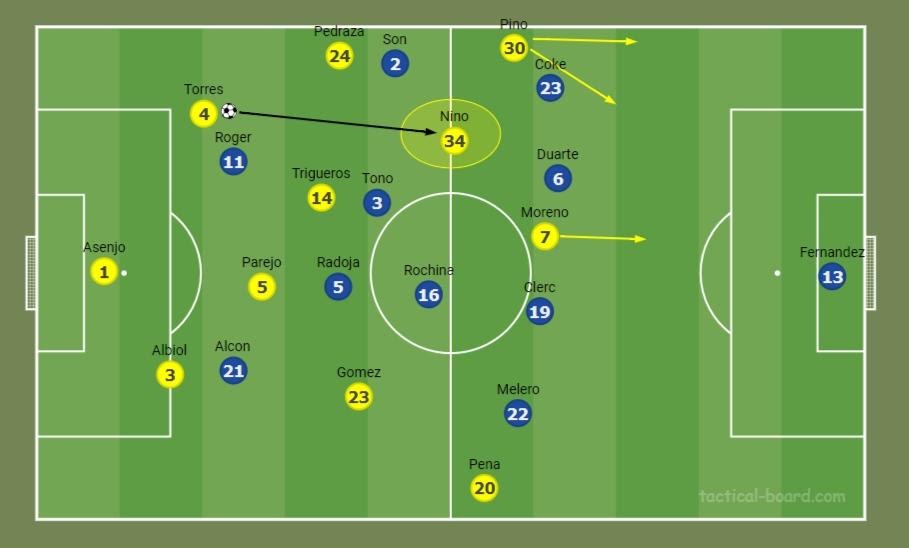 A common pattern used by Villarreal especially in the earlier stages of the game was having Trigueros (LCM) and Niño (ST) [who dropped deep in the left half-space] in the same vertical line initially with Trigueros (LCM) then dropping deep to provide himself as a passing option to Pau Torres (LCB) on a different lane + also dragging Toño (RCM) with him and clearing the passing lane to Niño (ST). 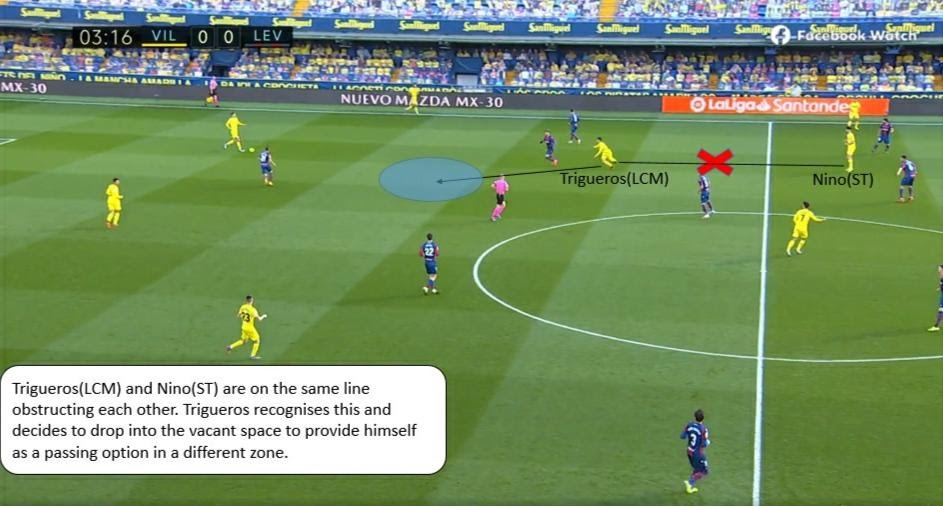 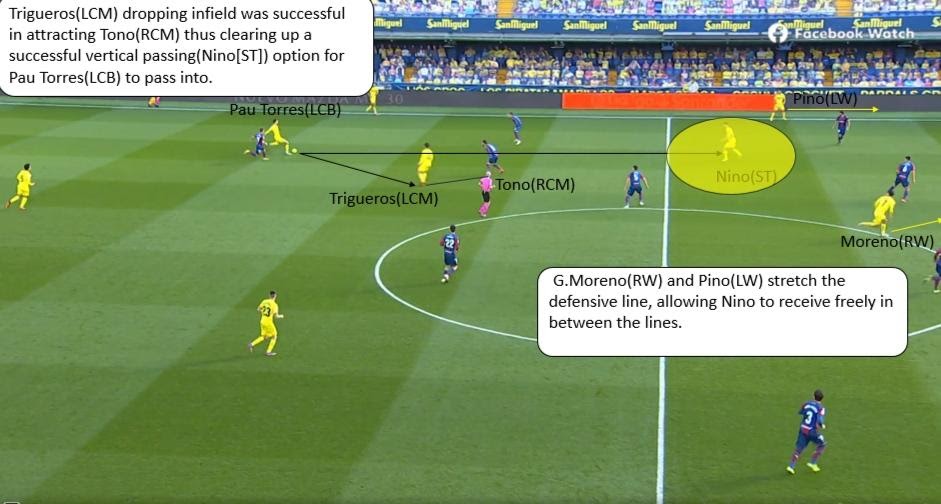 Opening up the lane was one bit, the other bit was making sure that Niño (ST) receives with no pressure in behind and with time and space to turn which was made sure by Pino (LW) and Moreno (RW) who pinned back Levante’s backline preventing the centre-backs from stepping out to maintain vertical compactness. 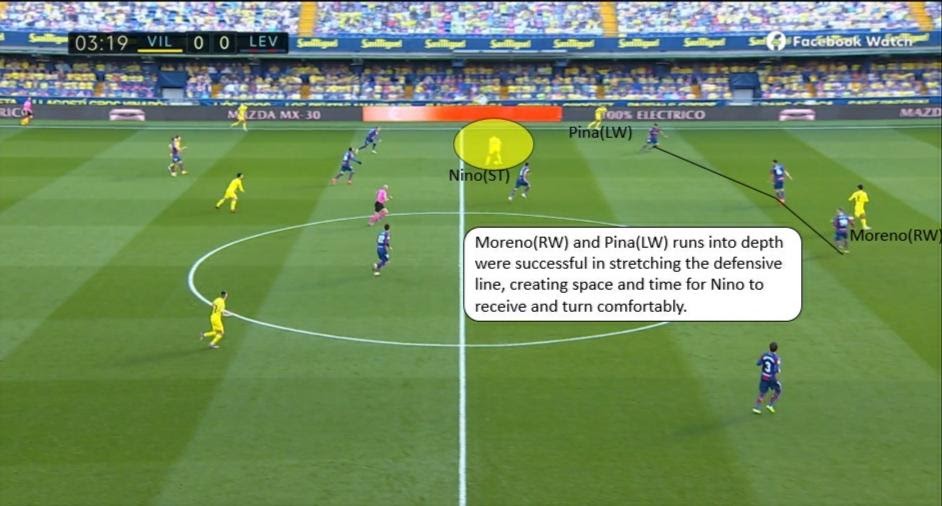 As illustrated above, Moreno’s (RW) role was crucial throughout the game with him coming inside from right wing and taking up high and central positions to constantly provide runs into depth and free space between the lines. 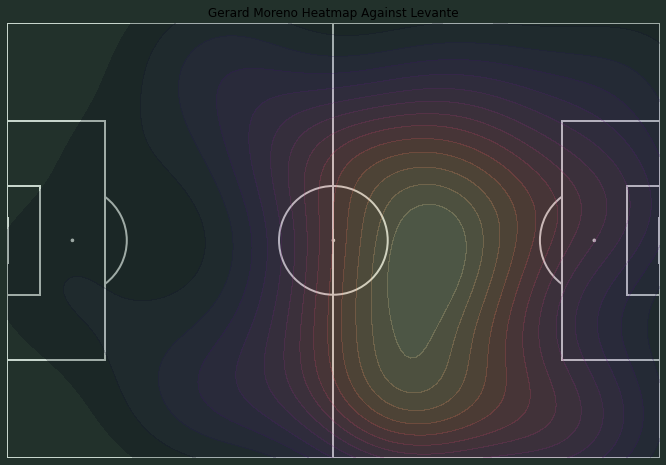 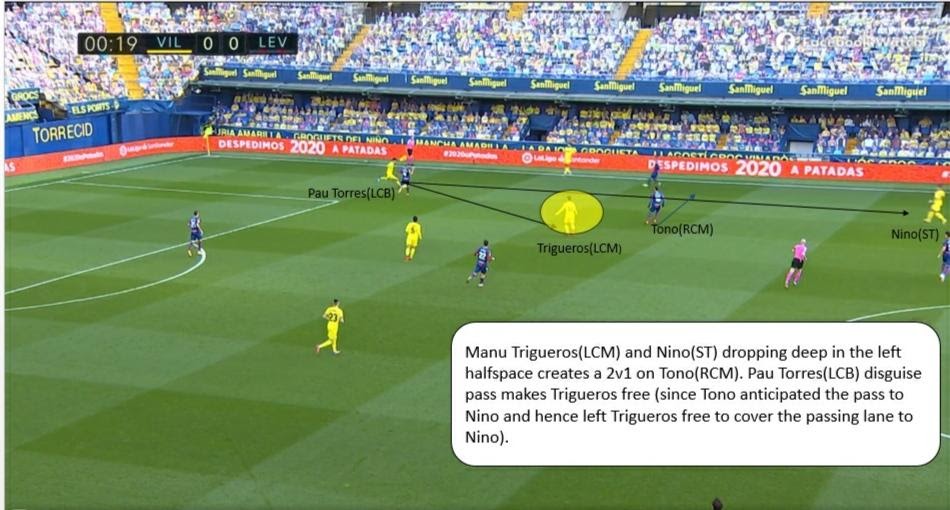 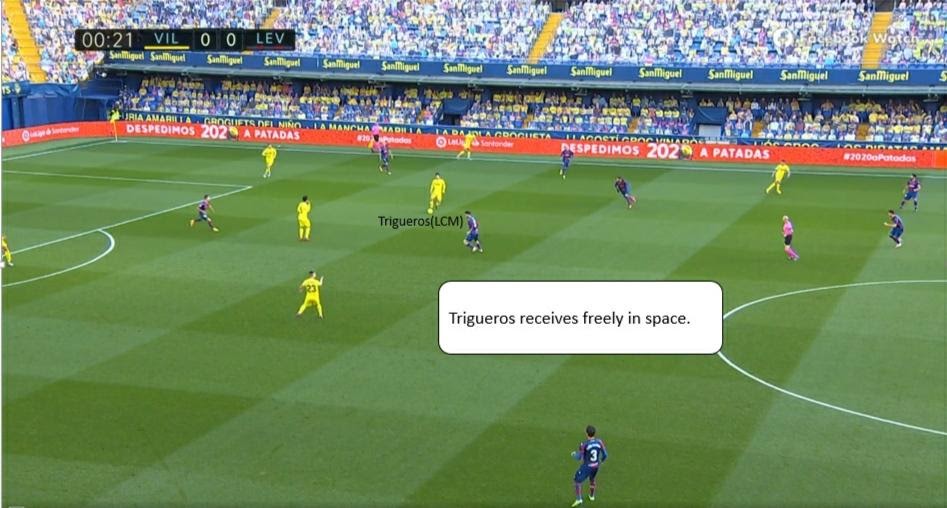 This concept of vertically stretching teams was also performed on goal-kicks to provide Asenjo (GK) with an option between the lines that he can play a chipped ball into. 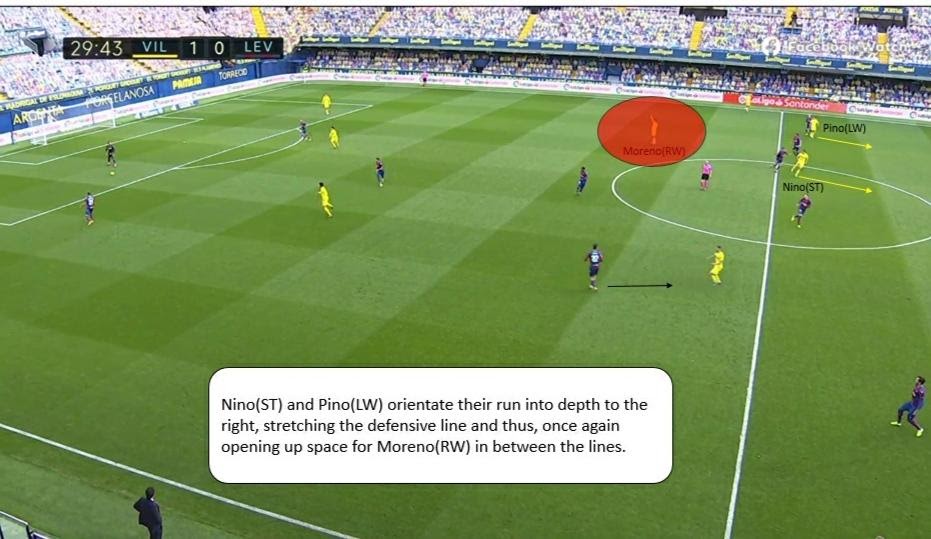 4v3 Overload in Midfield To Generate a Free Man

Despite the success of the overall structure in the first half, Unai Emery decided to change things up by bringing in Samuel Chukwueze (RW) and Juan Foyth (DM) for Niño (ST) and Pino (LW) and moving Moreno central as a striker and Gómez to left wing from midfield. Though the position change hardly affected Gómez as he was still dropping in midfield to create a 4v3 overload in midfield: 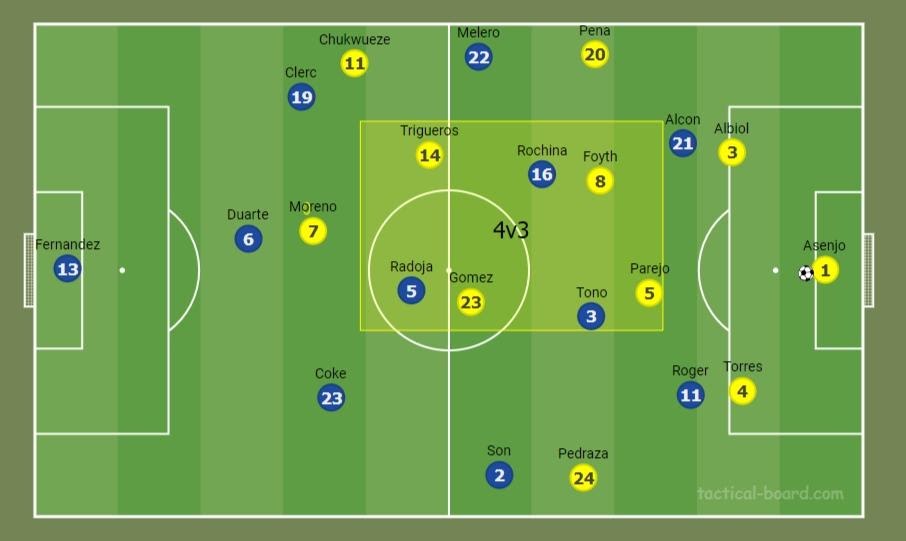 This meant that Villarreal always had a ‘free man’ in midfield which they were able to access continuously throughout the second half often through quick one-touch combinations facilitated by the technical excellence of Parejo and Gómez. 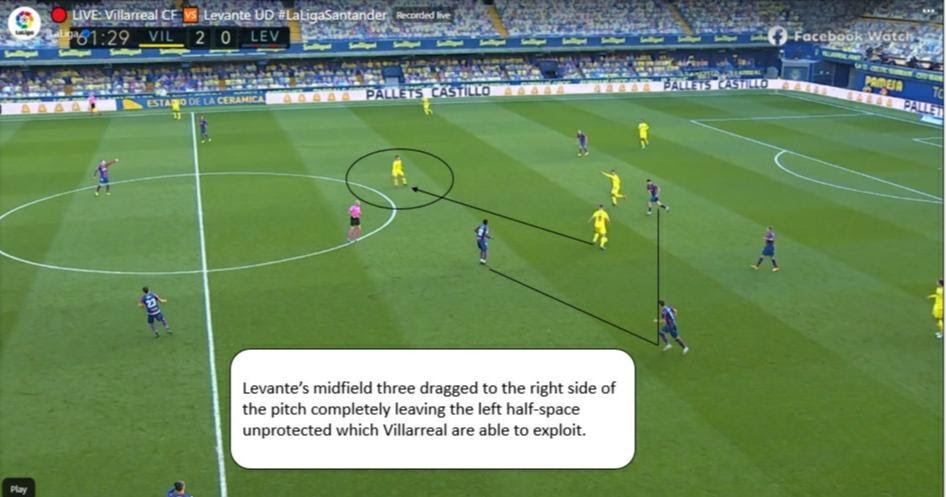 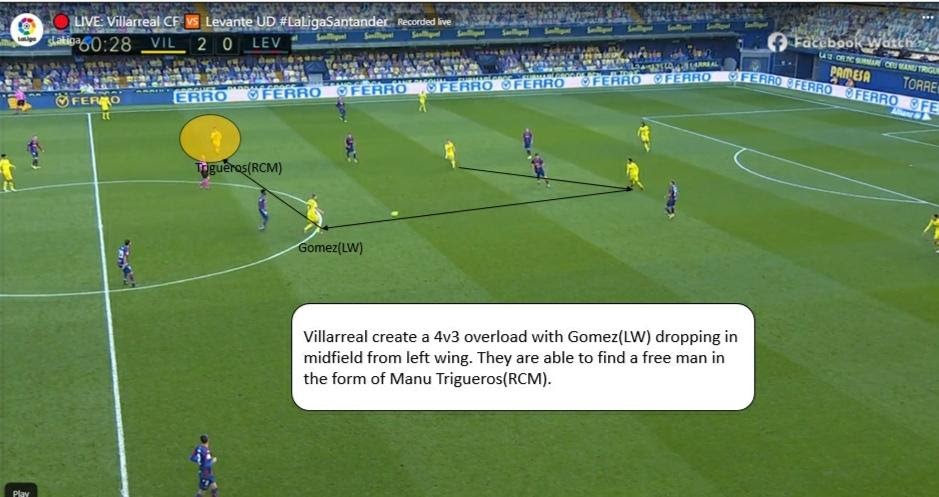 This ‘free man’ was often Trigueros (RCM), who would then further connect with Chukwueze (RW), who was high and wide on the right to engage and isolate Carlos Clerc (LCB) in a 1v1 to drag him out of position and create space for runners. Villarreal created a couple of great chances through this exact combination play, one of which led to their second goal.

For your tactics to succeed properly, first and foremost you need the ‘right players’ to carry them out. Thankfully for Emery, he has loads of them in this Villarreal side that have got the technical quality and the tactical understanding to execute the football Emery wants to implement. One of them that stands out is Manu Trigueros, whose football intelligence is amongst the best. Trigueros constantly scans his surroundings multiple times before receiving which means that he is always one step ahead of the opposite defensive player.

His technical ability is also admirable and he is often able to play line-breaking passes to find players in free space. Below is a video analysis of the first goal scored by Villarreal illustrating how they generated and exploited the free space and the crucial role Trigueros played in it: