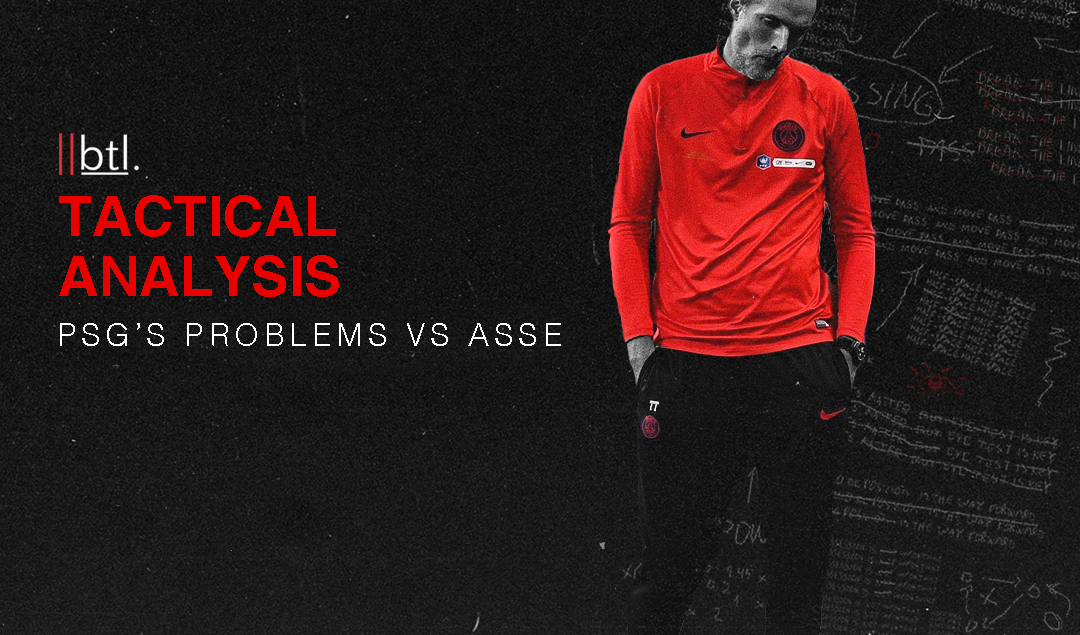 A little more than four months after their last official match, PSG faced Saint-Étienne in the Coupe de France final. Having lost the final last year against Rennes, Thomas Tuchel’s men were keen to win back this historic French Cup, but also to prepare for the quarter-final against Atalanta which will be played on August 12th.

PSG eventually won the final 1-0, but Les Rouge et Bleu did not necessarily convince as they had to face a very aggressive pressing from Claude Puel’s Saint-Étienne, and often had difficulty initiating their attacks.

Here, we will take a look at PSG’s build-up issues against Saint-Étienne and how they can solve them.

Tuchel opted to keep his 4-4-2 formation, with Leandro Paredes replacing Marco Verratti in the starting lineup, which was a big surprise as the Italian was considered fit to start the match and did not suffer from any physical problems. Mitchel Bakker also benefited from Juan Bernat’s and Layvin Kurzawa’s injuries to win a starting place at the left back position.

PSG looked to evolve in a 2-2-4-2 structure with the ball, with the usual emphasis on finding Ángel Di María and Neymar in the half-spaces or between the lines.

To protect the central midfielders and center-backs in defensive transitions, Bakker was instructed to alternate between staying wide to stretch the defense and coming in as an additional midfielder when the ball is on the right side of the pitch.

Expected to play in a 4-2-3-1 formation, Les Stéphanois defended in a 4-4-2 to mirror PSG’s shape when they have the ball, implementing a brave high-pressing strategy to stifle PSG’s build-up and stop them from playing from the back.

With this well-structured high-pressing, Saint-Étienne were able to completely shut down PSG’s build-up and force them to launch long balls over and over again, with no reliable target man on the receiving end or players ready to battle for the second ball.

However, this strategy only worked for the first 25 minutes of the match, as center-back Loïc Perrin got sent off for a brutal challenge on Kylian Mbappé, and Saint-Étienne had to play the rest of the game with 10 men.

How PSG Can Fix This Going Forward

Fortunately for Les Parisiens, the solution for this problem is rather simple and should be a pretty obvious one for Tuchel.

PSG can solve their systemic build-up issues by returning to the diamond shape during the build-up phase that they used earlier this season against teams defending in two-striker formations.

The diamond shape provides numerical superiority at the back, with the addition of a third player behind the ball against the opponent’s two forwards.

This is necessary as the defenders are an advantage of having an extra man, which means that even if the two attackers try to press two of the three players behind the ball, the third one should be free to get the ball without pressure.

Another advantage of this system is that man-marking Verratti or Paredes to take them out of the play can no longer be an option for the opponent, as they would risk leaving a wide open passing lane for PSG’s back three to find Di María or Neymar between the lines.

Finally, this shape also provides fullbacks with at least two safe passing options when they are pressured by wide players, contrary to the 2+2 structure that made them vulnerable against the opponent’s pressing.

It is not a coincidence that in the only action PSG tried to play from the back in this shape during the first 25 minutes, they were able to beat Saint-Étienne’s pressing, push them deeper and progress the ball efficiently.

While PSG suffered and could not react well to the organized high pressing of Puel’s men, their build-up issues in this match should not be difficult to solve going forward, and Tuchel will certainly have to fix them if his team were to qualify against an Atalanta side that also relies heavily on a high-pressing game.